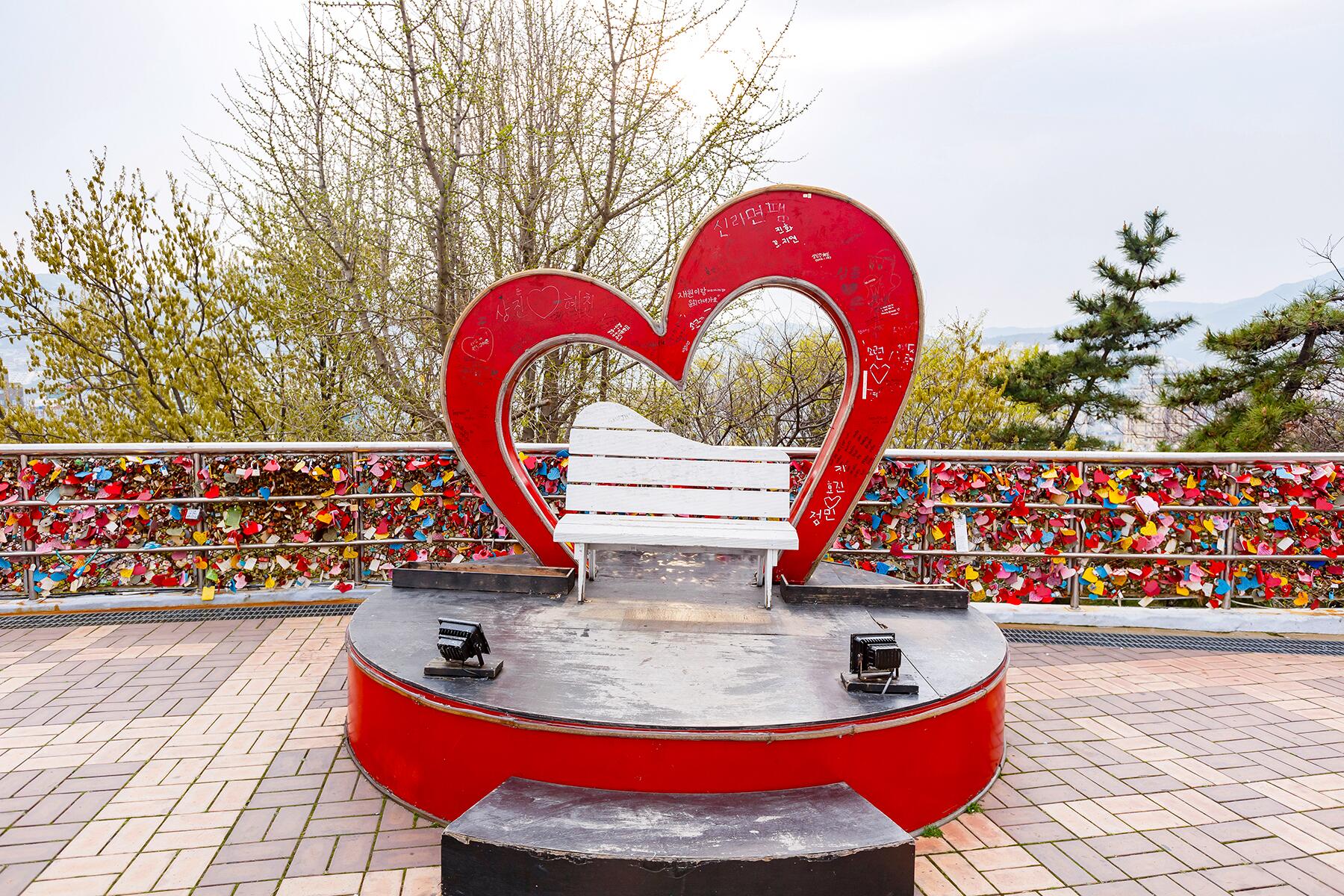 Some things, like Father’s Day presents or your refrigerator’s crisper drawer or amusement parks, are built with the best intentions, only to end in complete calamity (Dad, if you’re reading this, sorry about the 21-Gun Salute to Steve McQueen. I hope that we can find closure eventually.). These amusement parks have since fallen into glorious disrepair, but it wasn’t always so–they also baffled and upset children while their gates were still open. Here are 10 of the weirdest now-deceased amusement parks in the world. 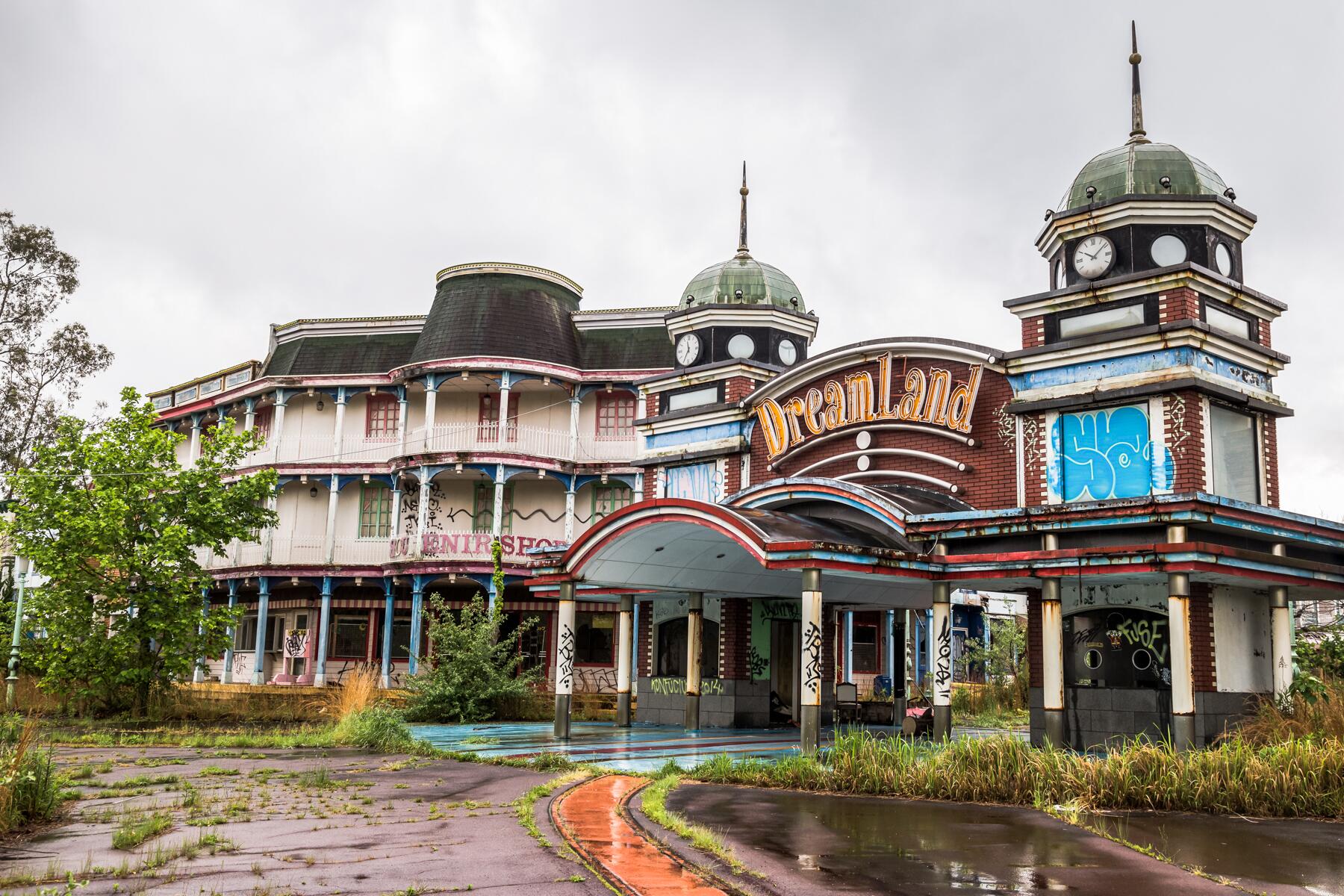 Nara Dreamland was Japan’s answer to Disneyland—assuming they were looking over Disneyland’s shoulder at the answers before the test was actually finished. Opened in 1961 and closed in 2006, Nara Dreamland was, ah, heavily inspired by its Anaheim counterpart, with actors strolling down its main street dressed as suspiciously similar characters like “Snoozing Model” and “Michael Mouse.” Since its closure, nature has made the park look like the whole place was evacuated due to the proliferation of aggressive shrubbery. 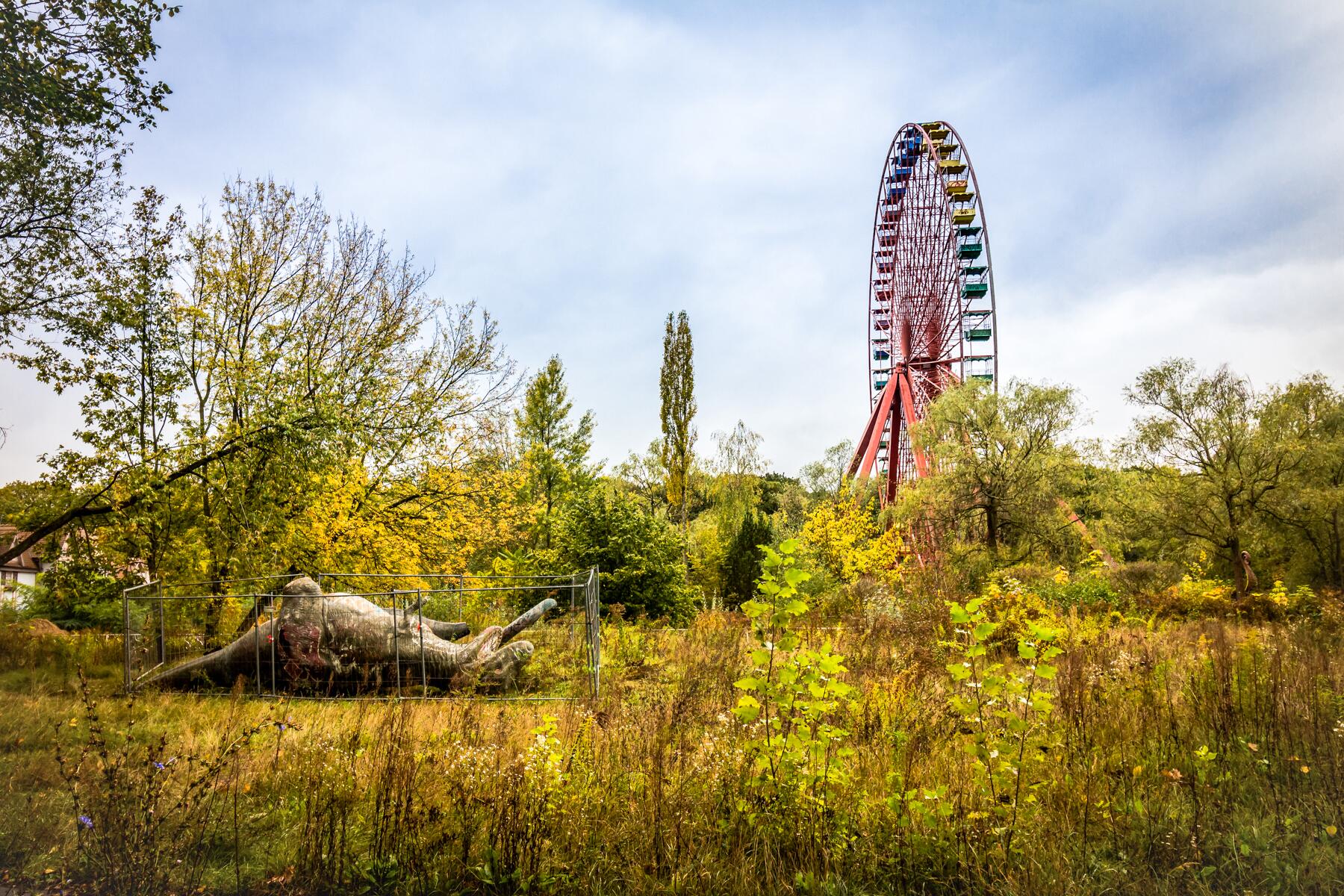 You know when the Cold War is happening and life in East Berlin is getting you down, and you think to yourself, “I wish I could get myself some education and culture but also risk my life riding a rickety, terrifying roller coaster?” Spreepark was for you. Built along the Spree River in what used to be the German Democratic Republic, the sprawling “kulturpark” was built, according to current property owner Tim Gärtner, to contrast with the West’s decadent amusement parks by offering basically the same experience but while also having someone whisper the word “culture” at you in a threatening voice. Rebranded after the fall of the Berlin Wall and finally closed in 2002, Spreepark now stands as a combination dumping ground and graffiti artists’ scratchpad. Somebody even stole all the dinosaur statues. For shame. Those were meant to impart culture to the children. 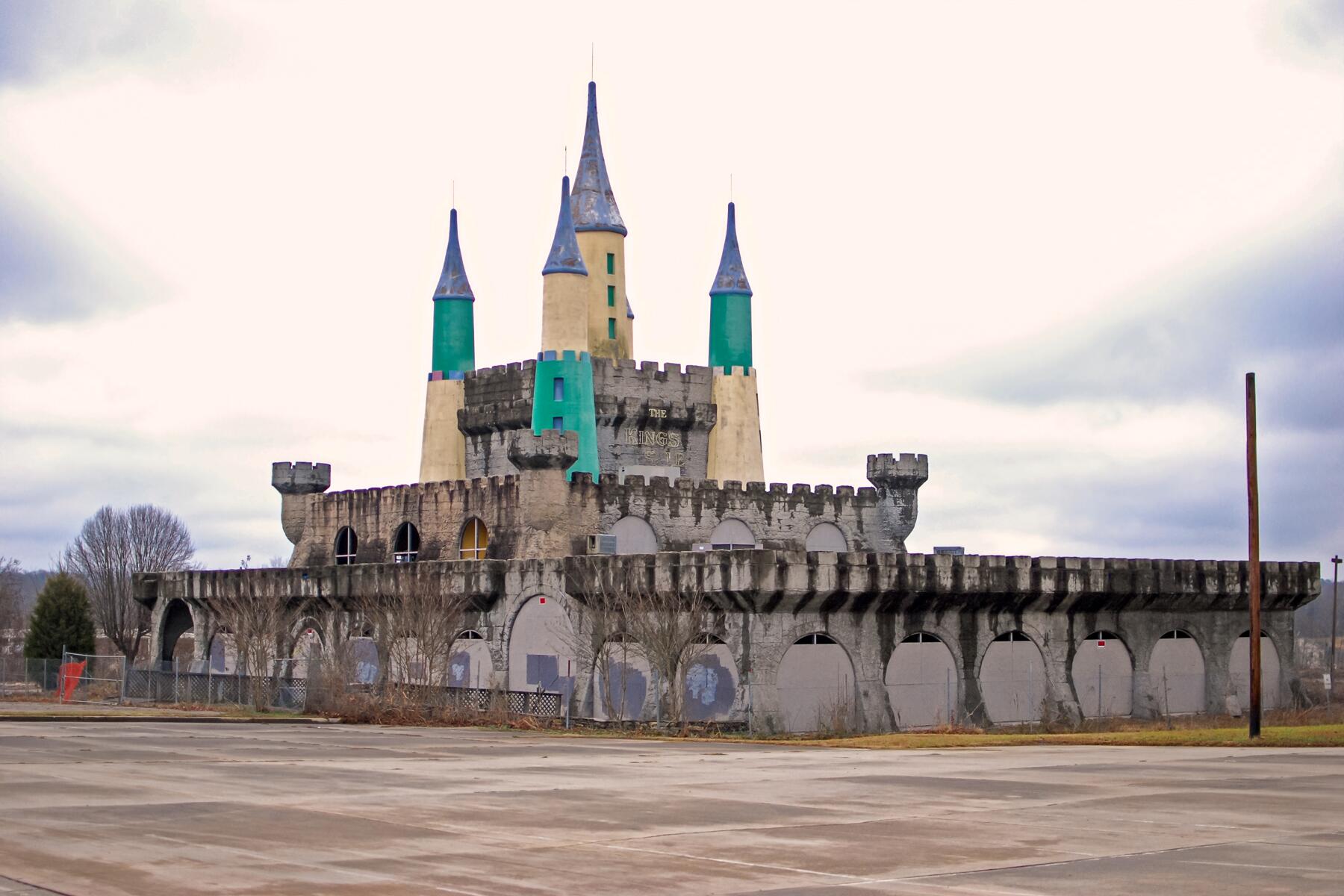 Back when prosperity gospel televangelists were a cultural force to be reckoned with, Jim and Tammy Faye Bakker figured that any social movement worth its weight in viewer donations should have its own theme park. In 1978, they opened Heritage USA in Fort Mill, South Carolina, to members of the public for whom Six Flags was presumably too lewd in its portrayal of Bugs Bunny’s proclivity for cross-dressing. Disneyland is fine, but does it advertise the ability to literally cure diseases in its Upper Room with the power of prayer AND have a 52-foot waterslide? Didn’t think so. Unfortunately, scandal and fraud led to the park’s closure in 1989, and visitors today can witness its crumbling majesty through a chain-link fence separating it from a decaying parking lot. 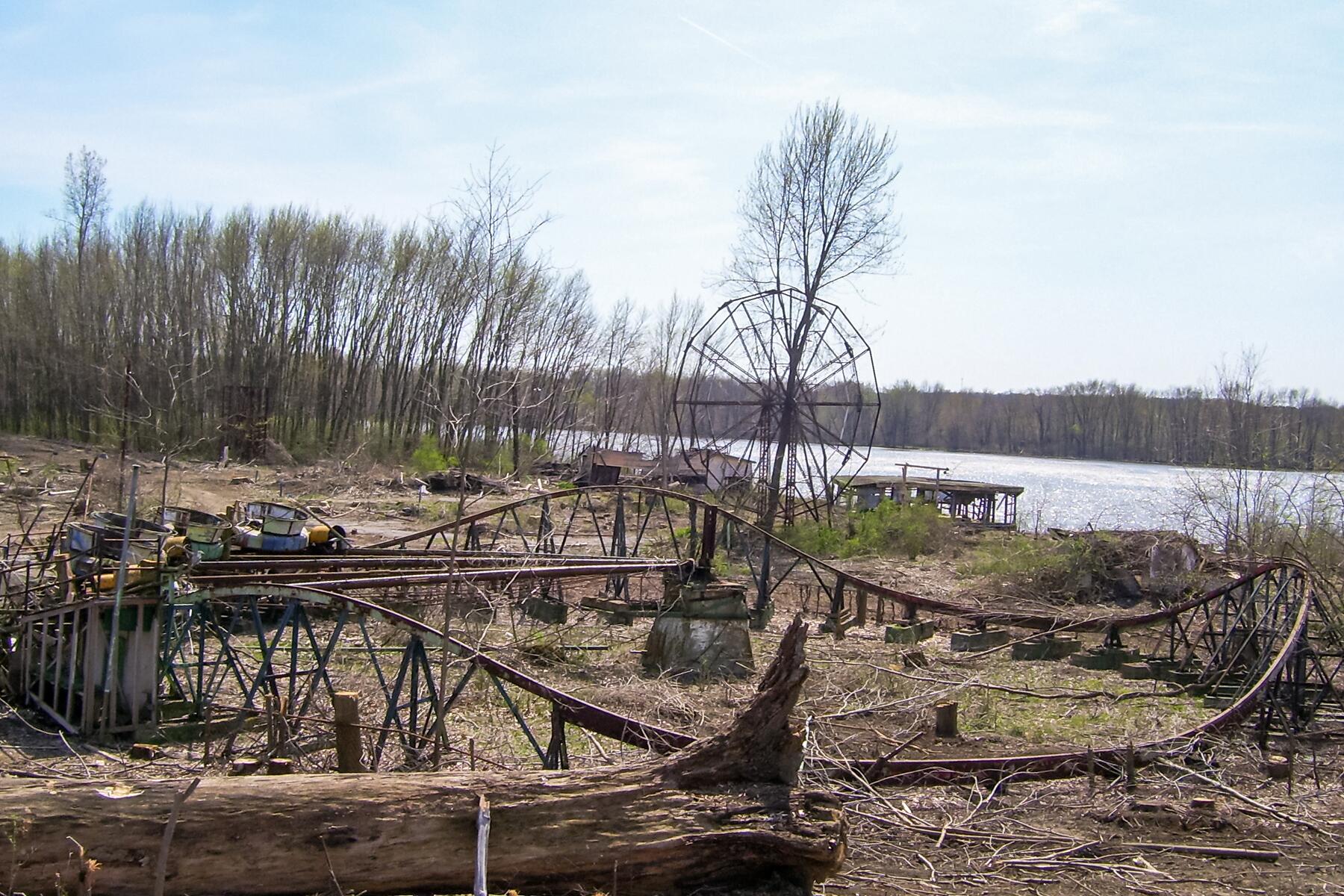 Closed the same year Van Halen’s debut album was released, the now-abandoned Chippewa Lake Park is so cursed-looking that it was used as a setting in the horror movie CLOSED FOR THE SEASON in 2008–there’s something about rotting roller coasters and sad, derelict Ferris wheels with trees growing right through them that makes one’s thoughts naturally turn to ax murder. Adding insult to injury, The Chippewa Lake Park Ballroom, famous for its numerous dances and concerts, was burned to the ground in 2002 when a local kid played with matches in the huge, abandoned building. There are currently tours through the remains of Chippewa Lake Park if you’re inclined to see it for yourself. 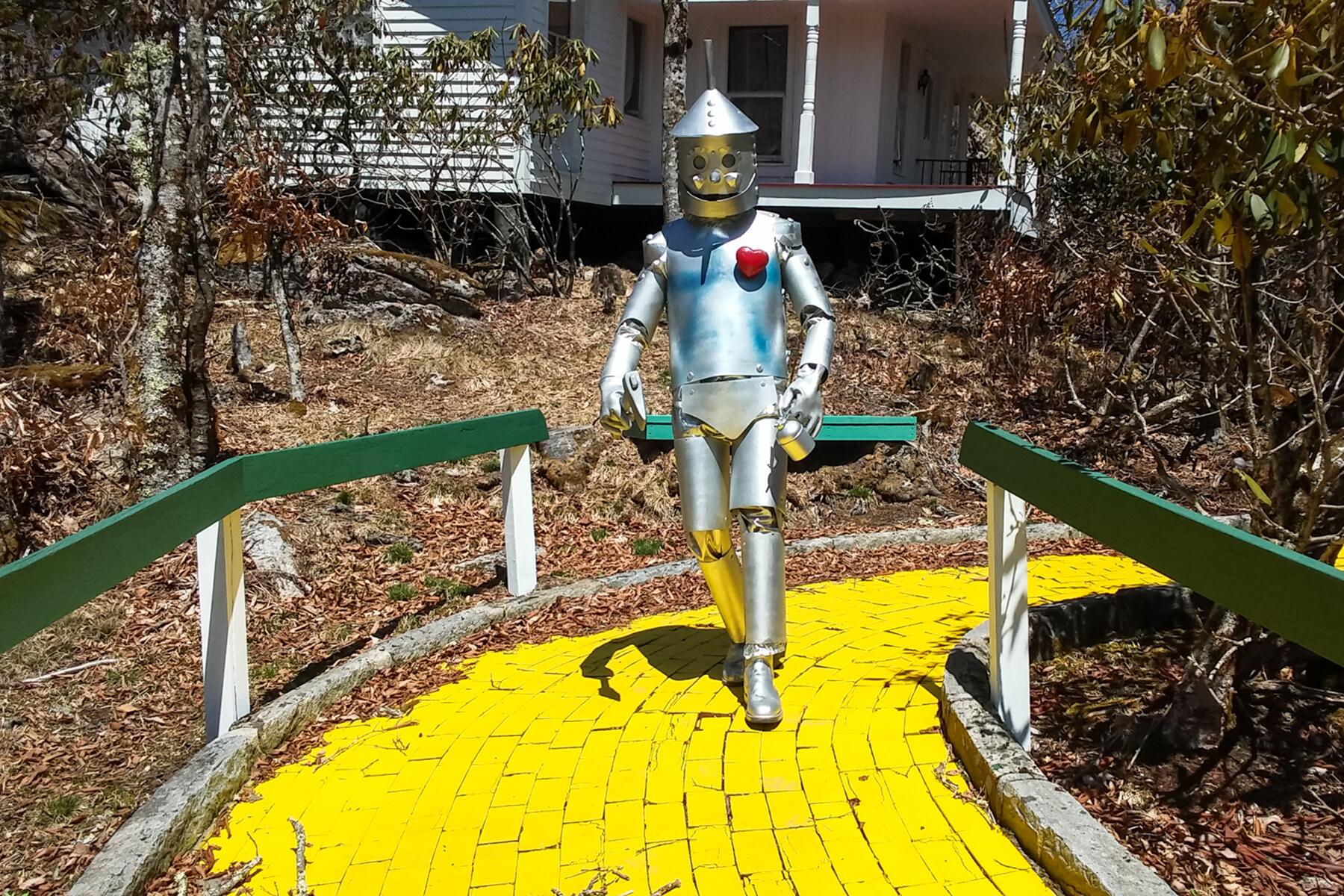 In 1970, a The Wizard of Oz-themed amusement park called Land of Oz opened in Beech Mountain, North Carolina, to huge initial attendance numbers that quickly went, “Eh, I’ve seen that movie, it’s okay, I guess,” and declined until a fire broke out in 1975 that effectively closed the park for good. For those of you who want to walk the yellow brick road and get menaced by life-sized, rust-ravaged Tin Men, tours are offered around Halloween every year for those who are big fans of either bowel-churning terror or The Wizard of Oz (1939) or both. 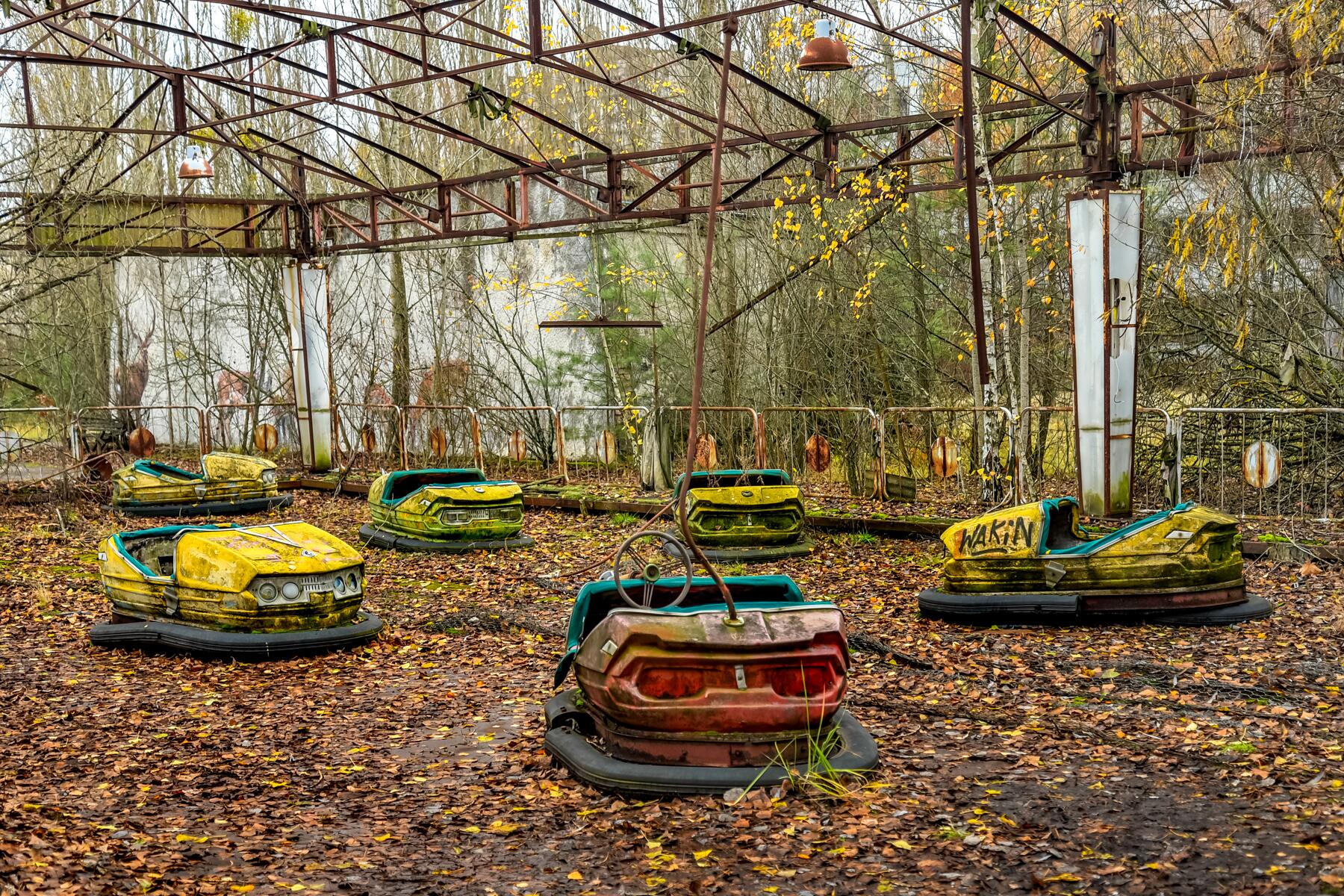 I mean, you knew this one was gonna be on here. Nobody ever got to ride any of the Ferris wheels or roller coasters because a few days before it was set to open in 1986–wait, you saw where Pripyat Amusement Park was located, right? Real quick, re-read the location, above, and let that sink in. It stands today a moldering, corroded wreck that doubles as both a nightmare fuel vision of the death of childhood innocence AND a metaphor for the failure of bureaucracy to keep the public safe from disaster. Versatility is key. 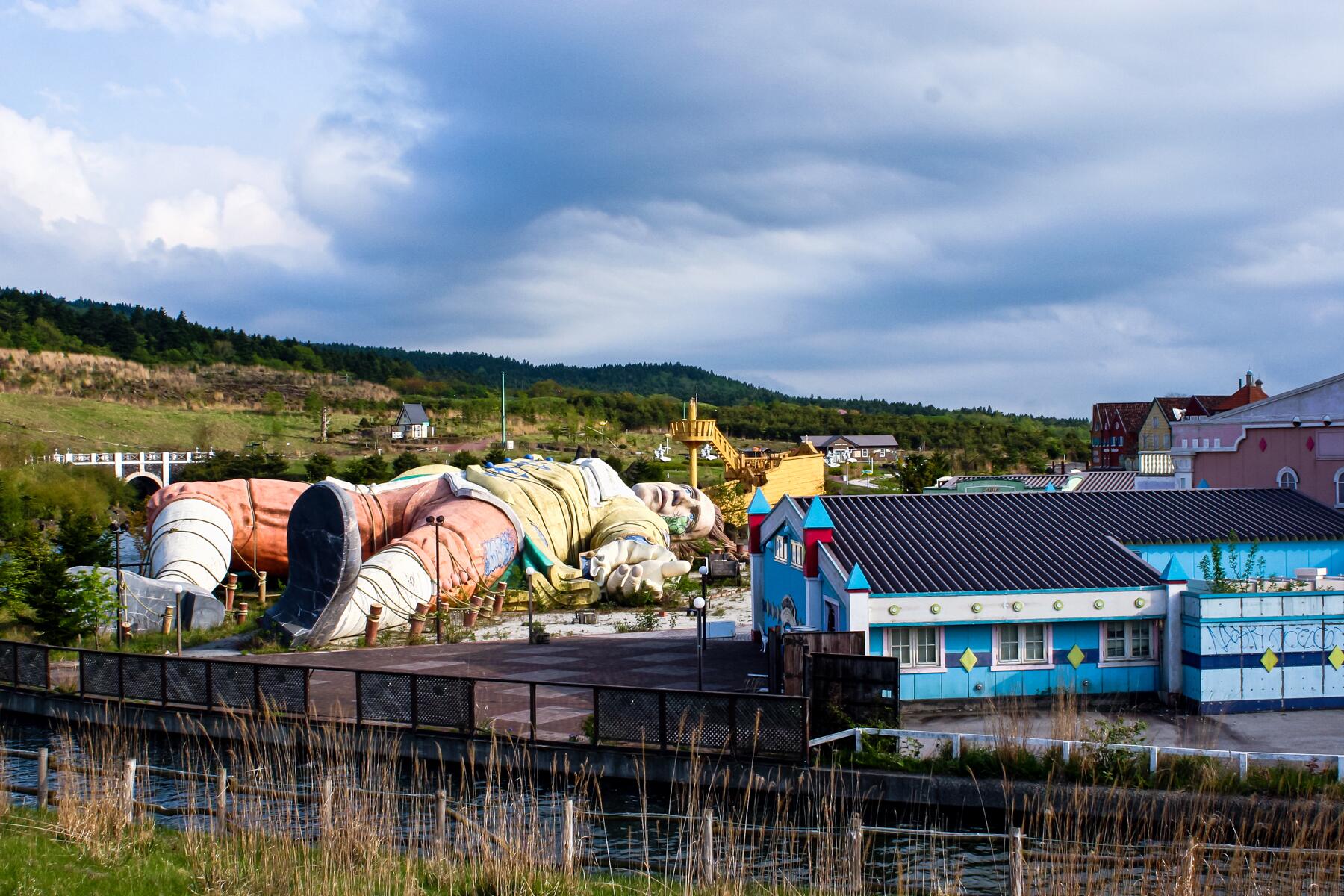 Built in 1997 as part of the Japanese government’s economic stimulus plan labeled, “I don’t know, people need jobs, build a theme park based on Gulliver’s Travels, you got any better ideas,” the bizarre park featuring Brobdingnagian imagery and satirical references to 1726-era political culture quickly closed down due to zero public demand. It did leave behind the hulking remains of a giant bound permanently to the earth by ropes he can never untie, though, which rules. 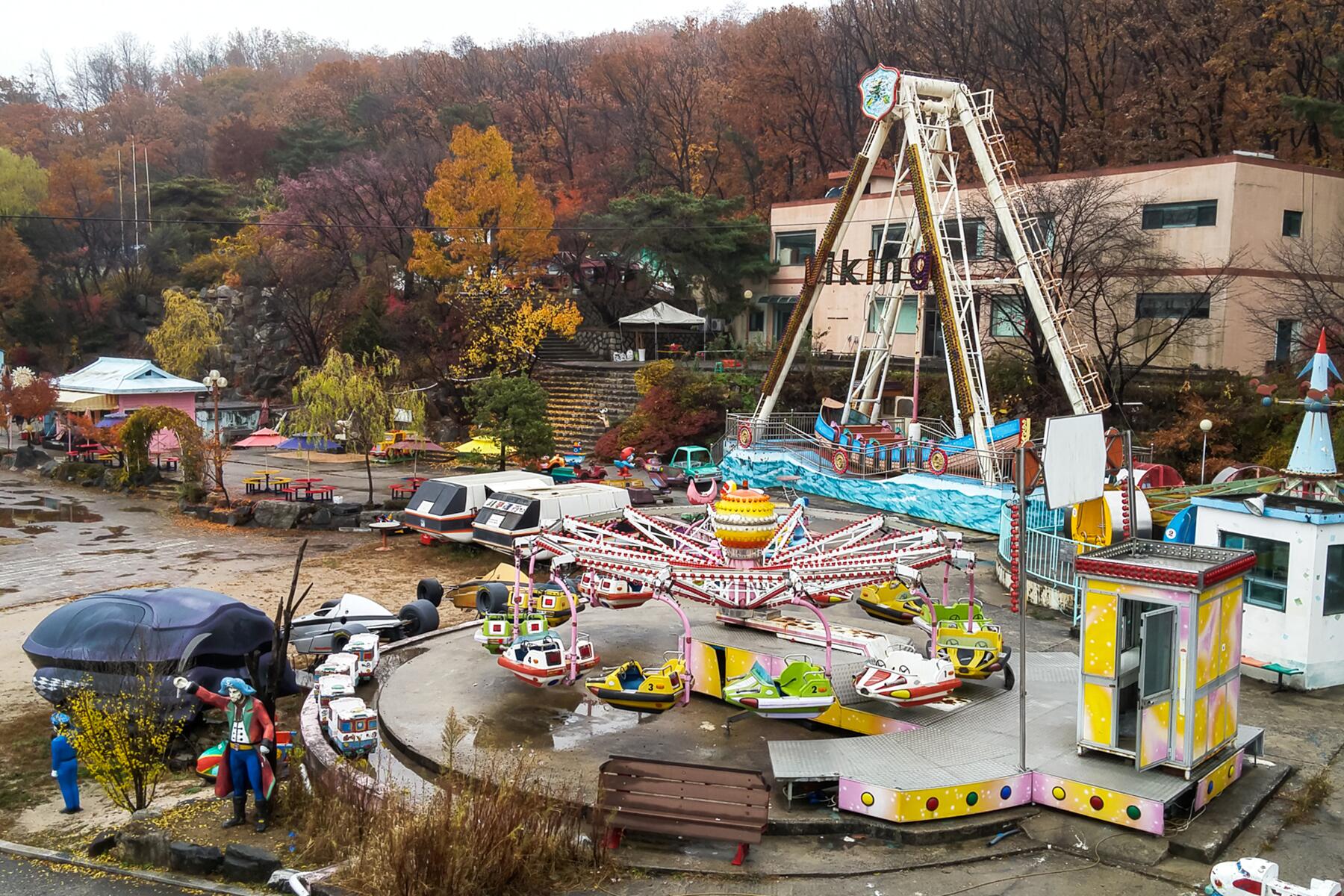 We should all be so lucky as to monetize our own decay and decline. This amusement park, built in 1980 and closed down in 2011 (reportedly due to hauntings, which is a more exciting explanation than the fact that local competition from other more exciting parks led to a decrease in attendance), and the current owner of the property allows visitors to look at the pop culture wreckage of Yongma Land for about $5 USD. You can’t do much better than photos of a Sailor Moon statue staring into the void as a massive, rusting octopus weeps to heaven to be released from this veil of tears. 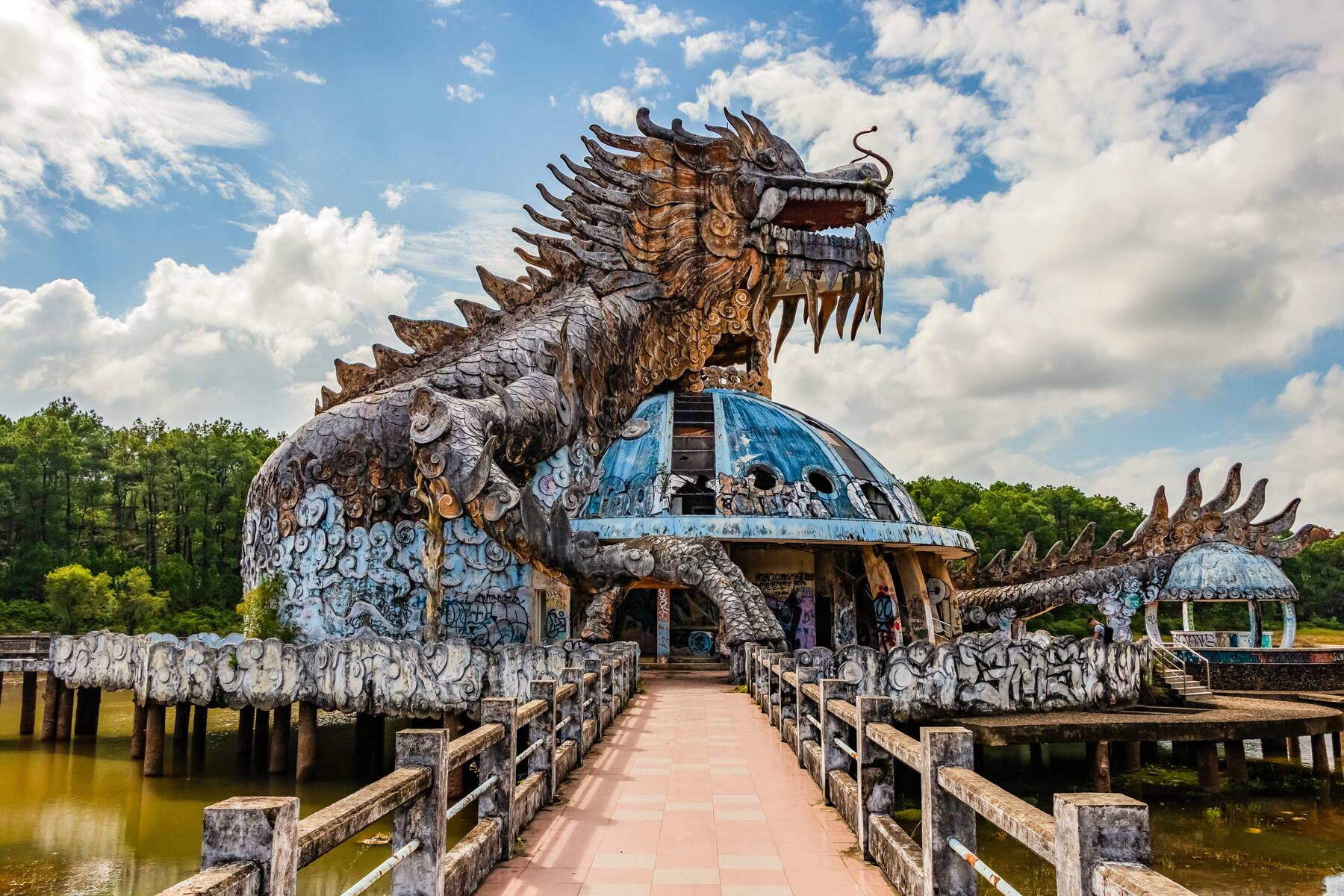 You ever get so excited about a project that you let people see what you’re working on before it’s finished and ready to be released into the wild? That’s what happened in 2004 to Hồ Thuỷ Tiên, a hugely ambitious aquatic park built in the North Central Coast of Vietnam when the owners of the park went, “Whatever, I want everybody to see this dope three-story-tall dragon statue NOW,” and admitted parkgoers to see the sights. After folding due to the financial difficulties involved in maintaining a giant aquatic park with no end to construction in sight, Hồ Thuỷ Tiên has since gained a second life as a legendary tourist spot for the adventurous traveler who likes to ask locals questions like, “Can you tell me and my friends where to find the abandoned water park?” and “How many people get eaten by ghost crocodiles here every year?” and “Is getting murdered worth it to see that amazing three-story dragon?” 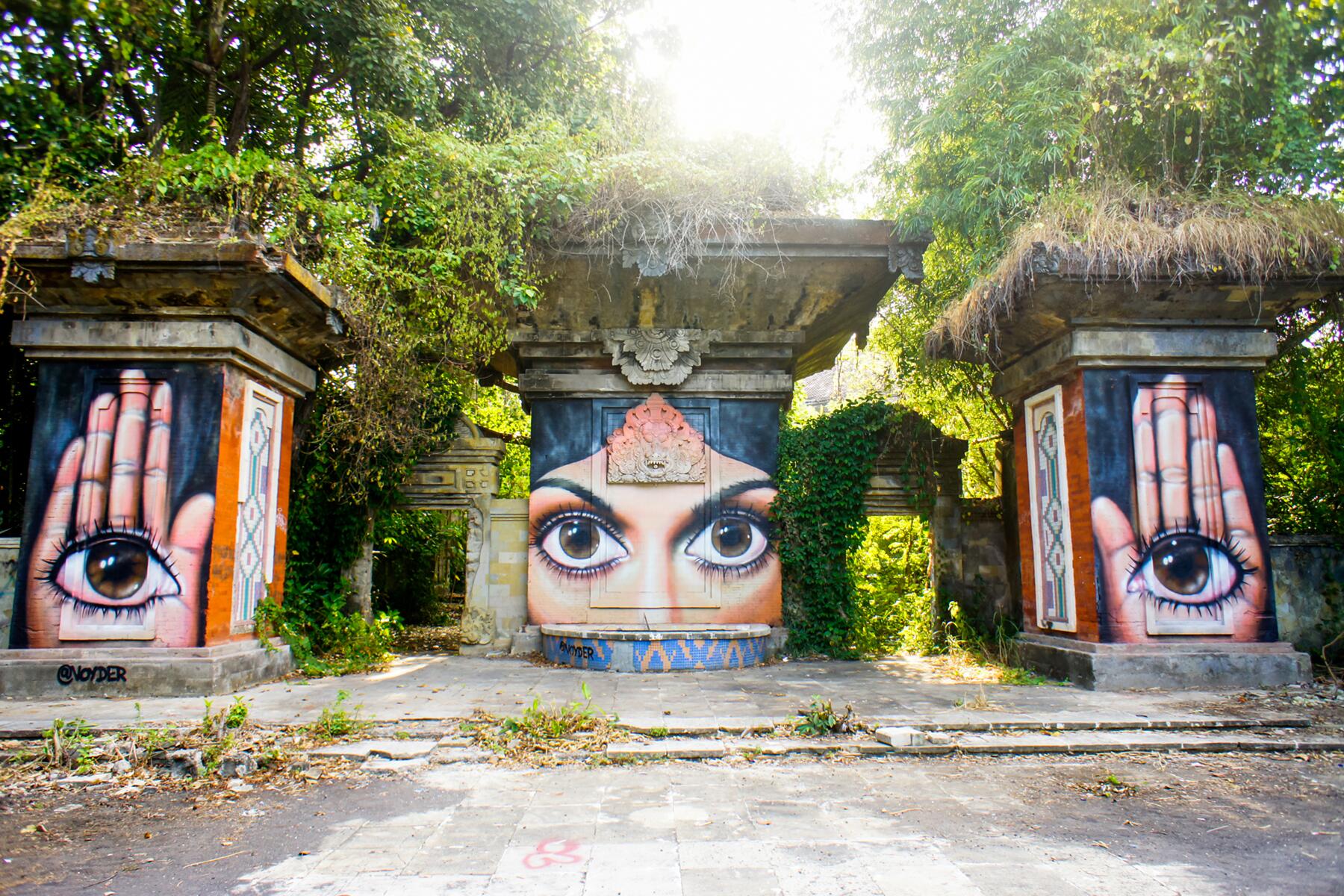 Nature will eventually consume us and everyone we love, and you’re never more reminded of this fact than when looking at the ruins of Taman Festival Bali, an amusement park that never officially opened for mysterious and probably-not-terrifying-at-all reasons but DOES expertly answer the question, “What does it look like when a jungle eats $100 million?” Vines and trees and moss and bats have reclaimed much of the sprawling park-to-be, and everything from the 3D movie amphitheater to the concession stands and attractions have been absorbed by local flora. There’s something humbling about seeing our Ozymandias-sized ambitions get eaten by mother nature, and Taman Festival Bali is a great place to consider our mortality–not least because of rumors of rogue crocodiles with a taste for hapless tourists.