In a nation of legendary horsemen, a trek by foot is almost unheard of. But if you’re willing to brave rumors of wolves and bandits, you’ll feel like you’ve almost stopped time.

Mongolia is a country of wide-open spaces. Outside of a few industrial cities, powered by Mongolia’s natural resources, a grand wilderness lays waiting to be discovered. One-third of its three million inhabitants still live a nomadic life, and in summertime, white-tented huts (gers) dot grassy valleys. Hiking the steppes is not a light undertaking though, as distances are vast and formidable.

There are few official hiking routes in the country, giving its unchartered nature a mouthwatering appeal. A couple dozen kilometers outside of any urban area will find you in a desolate landscape, ready to head off into the hinterlands. Locating water is an important consideration, but every nomadic ger will have some on hand. 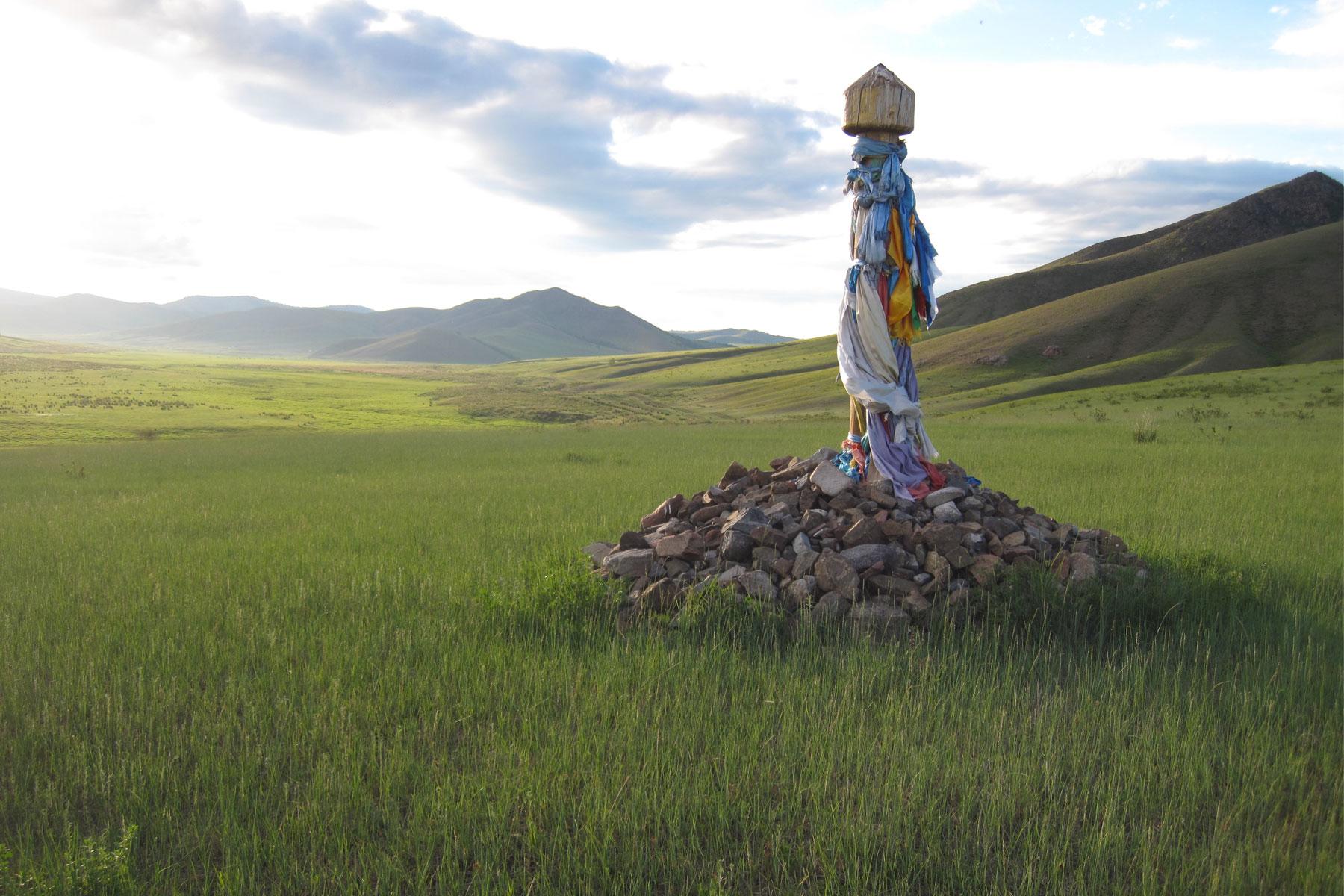 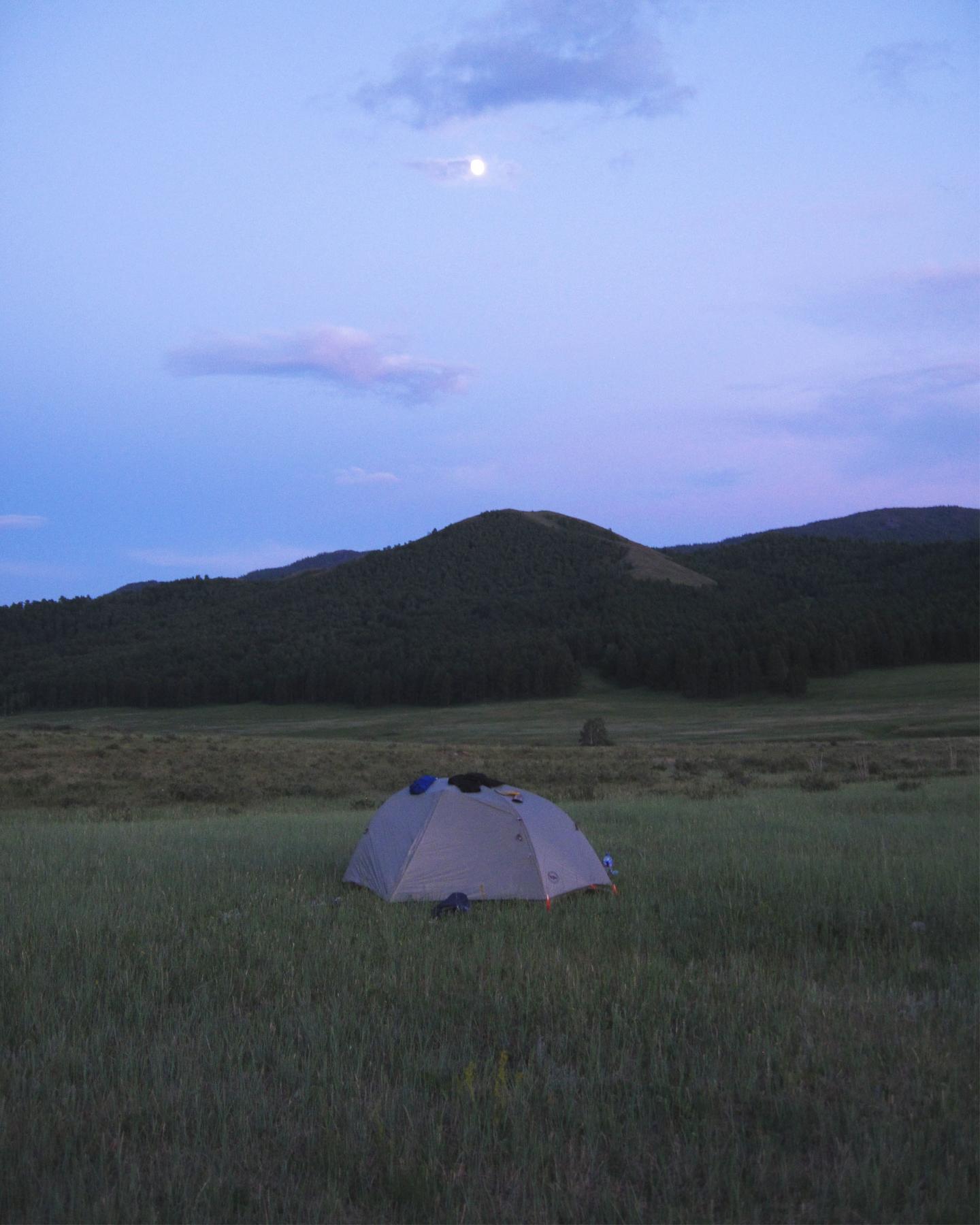 Despite local rumors, Mongolia is a safe place for hiking. Wolf attacks do occur, usually in winter when food is scarce. And a backpacker was killed in 2016, but in a remote mountain region. A solo expedition here is probably a safer proposition than a summer visit to a major European city, and it is likely that the most forceful encounter you’ll have is an invitation to share a bottle of homemade vodka or carve off a piece freshly-boiled goat’s leg.

Mongolians are incredibly hospitable, but they are also a rugged people; don’t expect to always be greeted with a warm smile. This is a country, after all, in which the most popular sports are endurance horse races, archery, and wrestling. And it’s the birthplace of one of the world’s most notorious marauders—Genghis Khan (transliterated as Chinggis Khaan)—whose name graces the international airport. 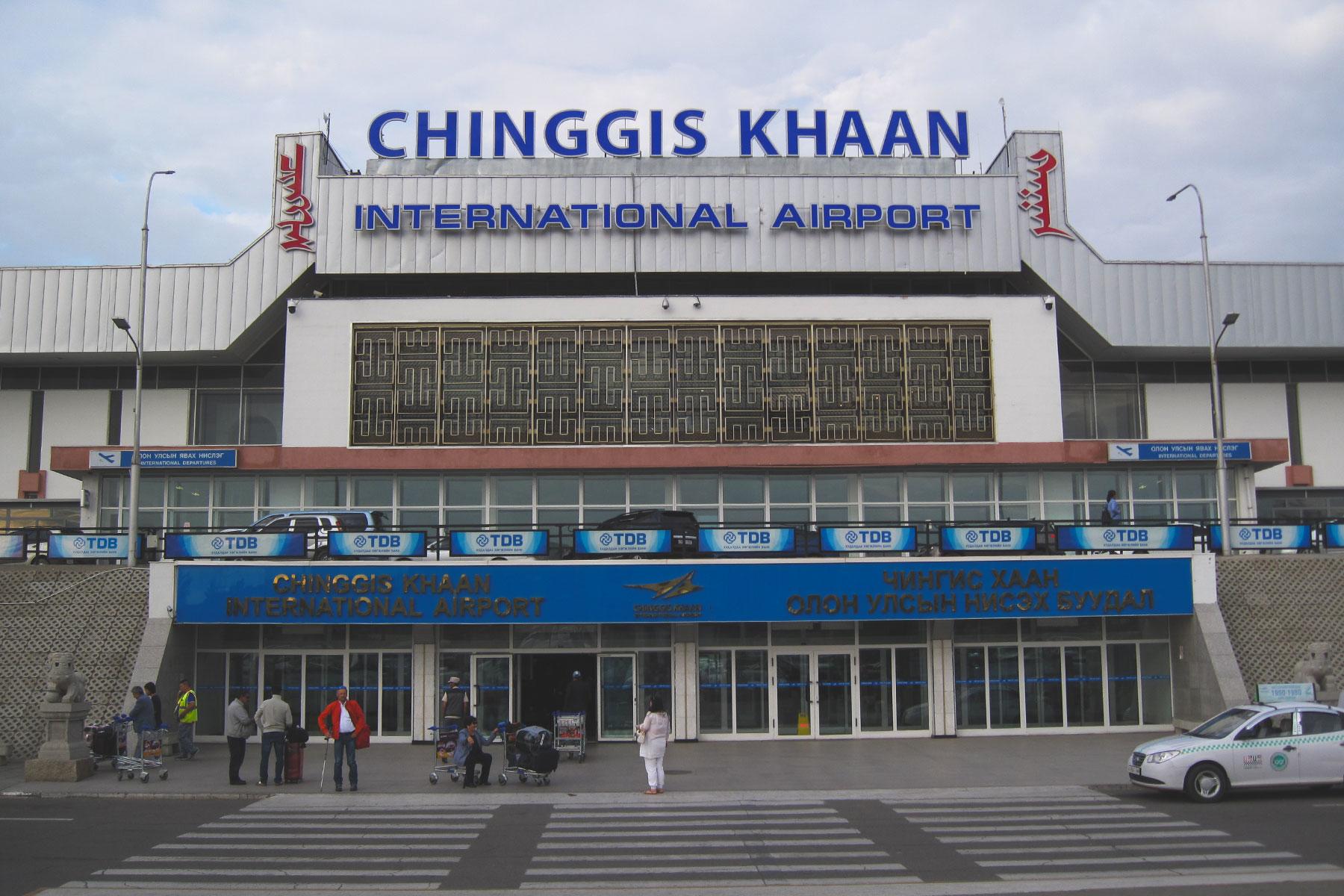 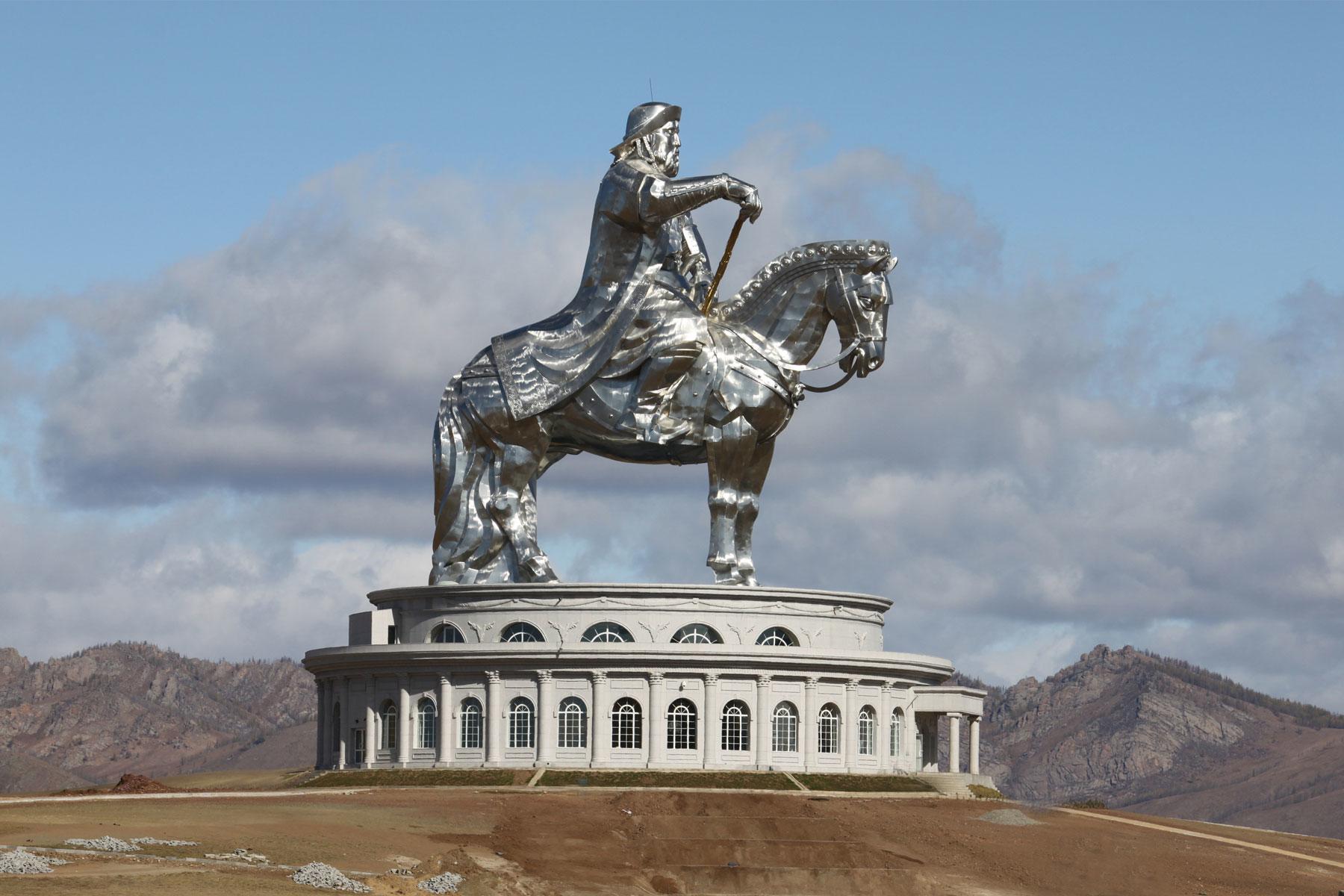 A trip to Mongolia begins in the capital, Ulaanbaatar. The polluted city seems out of place in a land of placid steppes. The Hotel Ulaanbaatar, however, gives a fascinating glimpse into Soviet-era domination. Be prepared for dirty carpets and spotty service, but don’t miss the black and white historic photos on the second floor. And the combo of wild-eyed Aussie enduro-riders and Chinese businessmen makes for a singular hotel experience.

Ulaanbaatar can be a useful stop for last-minute supplies. The unique State Department Store is a good starting point. Seven Summits, conveniently located downtown, is small but professionally-geared. And the city hosts a fair share of respected tour operators to help with logistics: Goyo Travel is a good choice.

If you’re committed to heading out solo, one trek that is easily managed is a four-day, 70-kilometer hike to the remote 18th-century monastery of Amarbayasgalant. The city of Darkhan, a three-hour drive from the capital (and not on many people’s bucket lists) marks the beginning of the journey. A few hours of fast hiking to the west finds you in a high set of rolling hills where you’ll have the last bars of cell service. After wading across the Orkhon River, cross three days of what can be best described as Yellowstone Park meets the Serengeti plains.

INSIDER TIPAt the river crossing, ask one of the families camped by the Orkhon to show you the best spot to cross. A group of playful kids will be better guides than a crotchety elder. It’s also possible to catch a ride on horseback if you’re patient.

There will be no cell service again until the end of the hike, so make sure you have a compass or GPS. Water can be found at several free-flowing sources (a good filter is essential). However, water can be a day away, so be prepared to haul up to four liters at a stretch.

The route has been well laid out on Soviet-era maps. On the ground, it can be tricky to get the hang of scale and distances—what appears on the map to be an innocuous jaunt between landmarks can take hours of arduous walking. And small shifts in the highlighted route have big implications in real time, so be careful you don’t head up the wrong valley.

While this particular trek has a historic destination, the real reason to hike in Mongolia is to slow time down. Hours of solitude are broken by a herd of wild horses galloping over a rise, or an old woman fetching water from a stream, or a pair of teen boys taking a break from their duties—tending shaggy goats—to catch a glimpse of the tourist laboring under a backpack. It’s easy at this plodding pace to again remember the rhythm of nature. 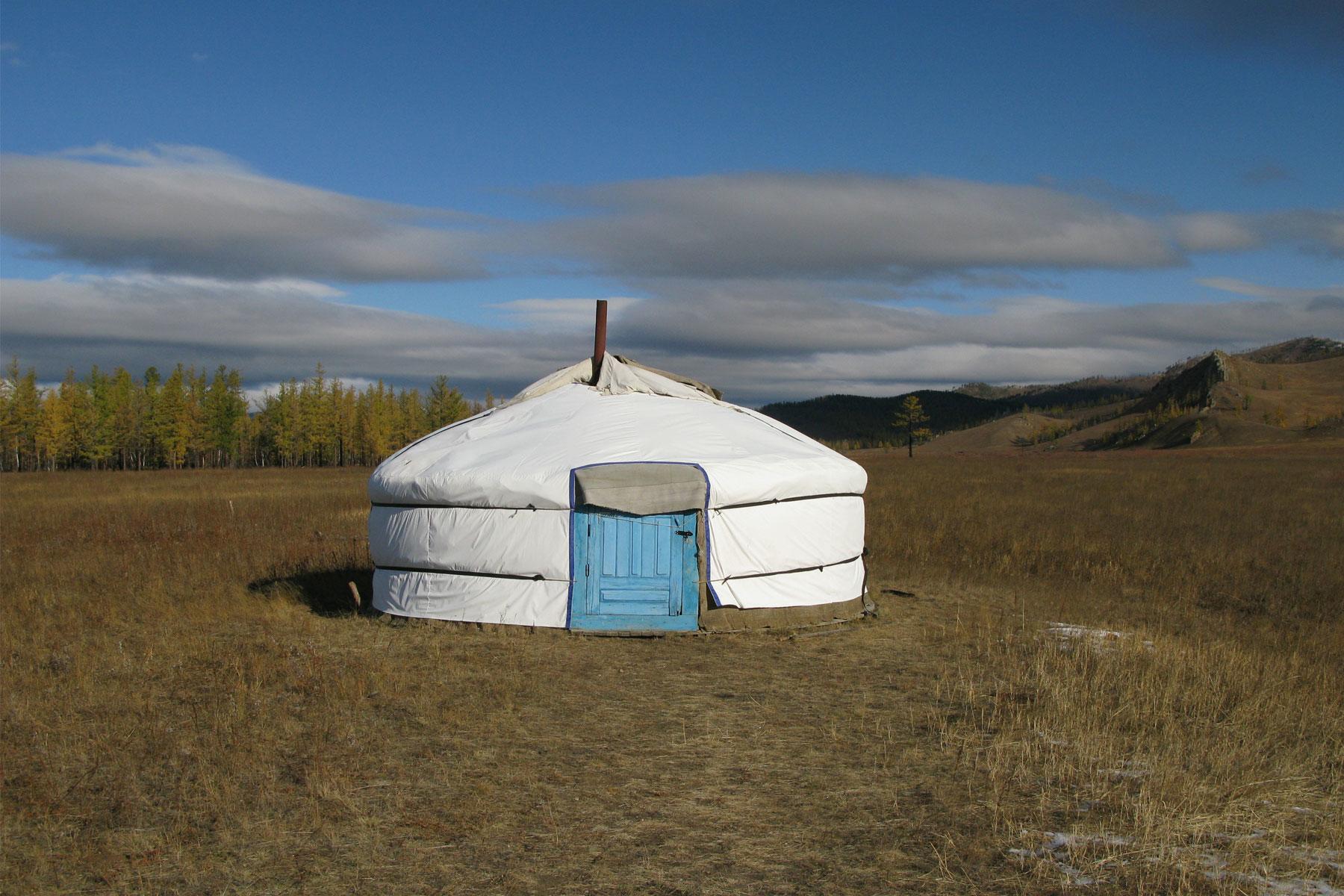 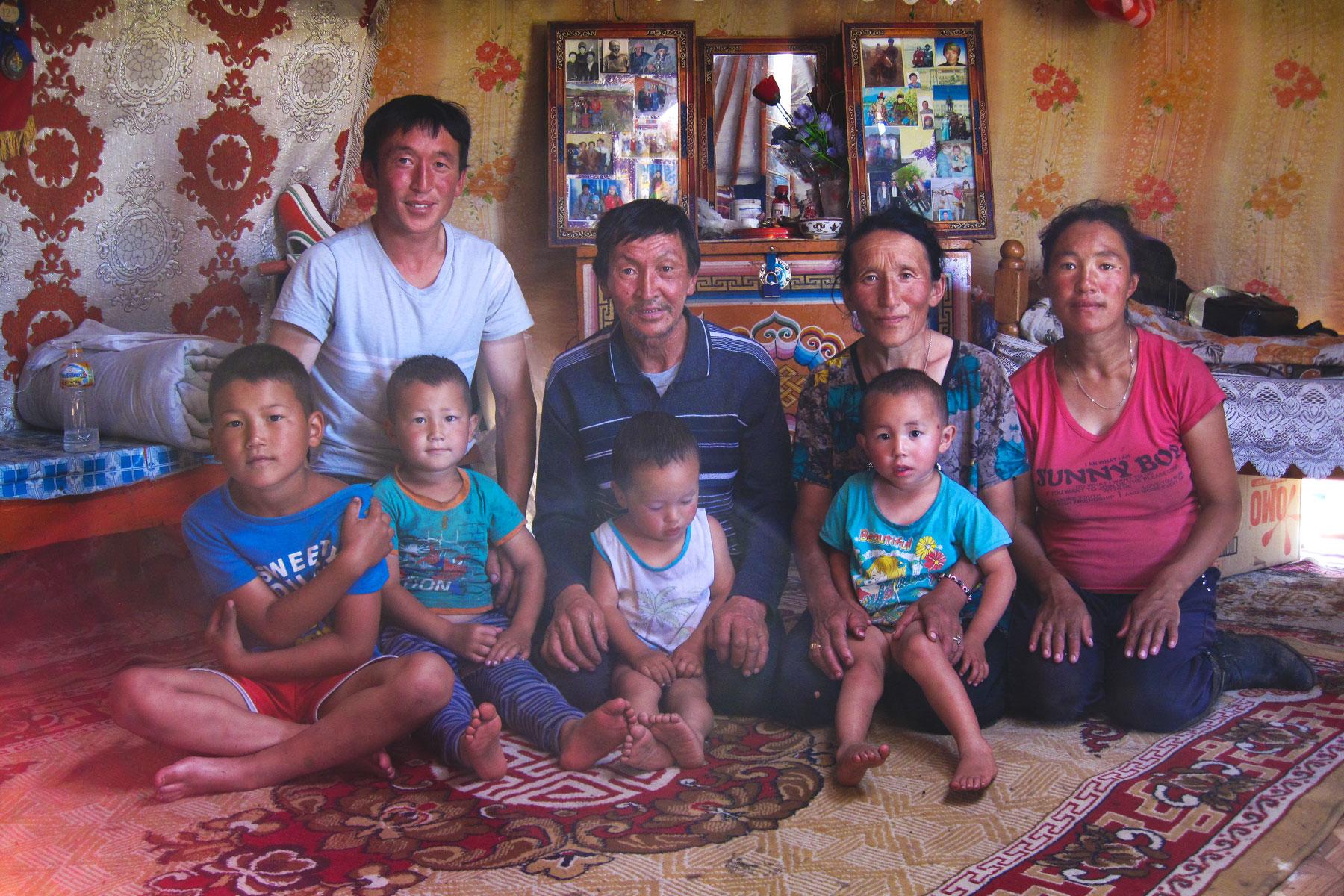 Occasionally, there are concrete reminders that you’re in a foreign land. A pint-sized stupa with two creaky prayer wheels stands alone on a prairie. Or an iconic ovoo—a colorful totem rising out of a cairn—graces a bluff. Built to honor gods or local spirits, ovoos are sacred shrines that were used to remember warriors lost on the battlefield—returning fighters placed a rock at the base for each fallen soldier.

For some travelers, the greatest adventure may lie in the invitations into local homes. Offerings of homemade curd cheese—bitter, usually sour, sometimes sweet, often with a few stray hairs (a good warmup would be to eat a scoop of French chèvre followed by a swig of buttermilk)—are washed down with tasty warm mare’s milk tea. And though it may be possible to survive on the alms of friendly families tending their flocks, it’s best to pack your own food.

No English is spoken (Russian might be useful), so communication will require hand signs and smiles. Sitting in the awkward silence of fortuitous meetings makes for some of the best traveling experiences.

Wandering amongst the nomadic gers is a trek back in time, though one still sees modernity creeping in. Naked babies mingle with goats foraging for a snack under a flatscreen TV. A landline telephone hooked up to an antenna connects families to the outside world. A herdsman rides up and produces a cracked Samsung, proudly sharing two familiar words: Facebook and Messenger.

Arrival at the magnificent monastery of Amarbayasgalant is as bizarre as it is uplifting. Tucked at the head of a lonely valley, the expansive complex seems otherworldly after four solitary days on foot. A few nearby shanties provide food and shelter to tourists willing to endure the rough 4×4 journey from the nearest paved road. The monastery itself feels almost abandoned. Grasses sprout from the roofs of sweeping pagodas, pigeons coo from cracked eaves, and ancient tiles still gleam as if freshly painted. Overlooking the scene from a high nearby hill, an all-seeing stupa and golden Buddha are both reached by long flights of white stairs. 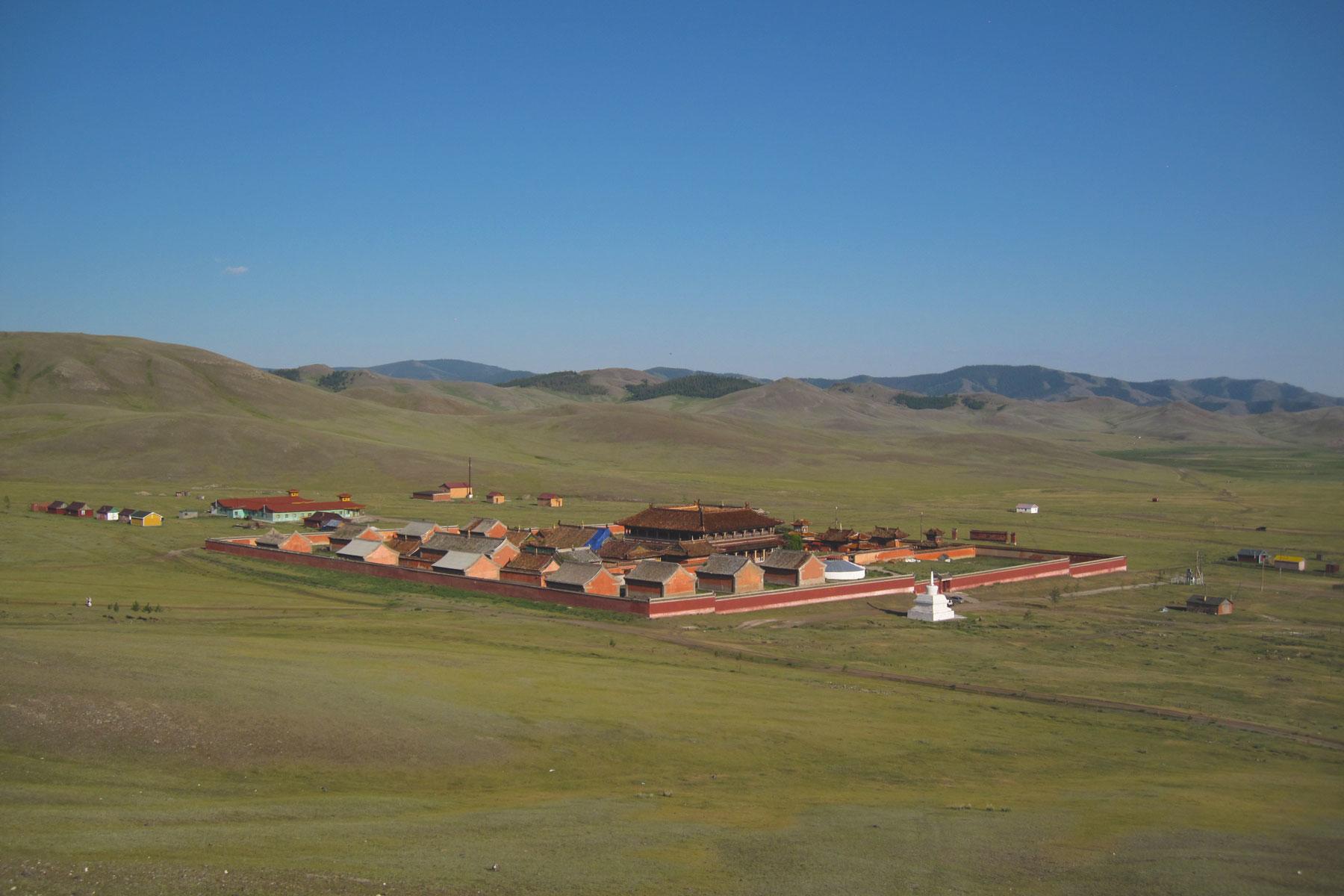 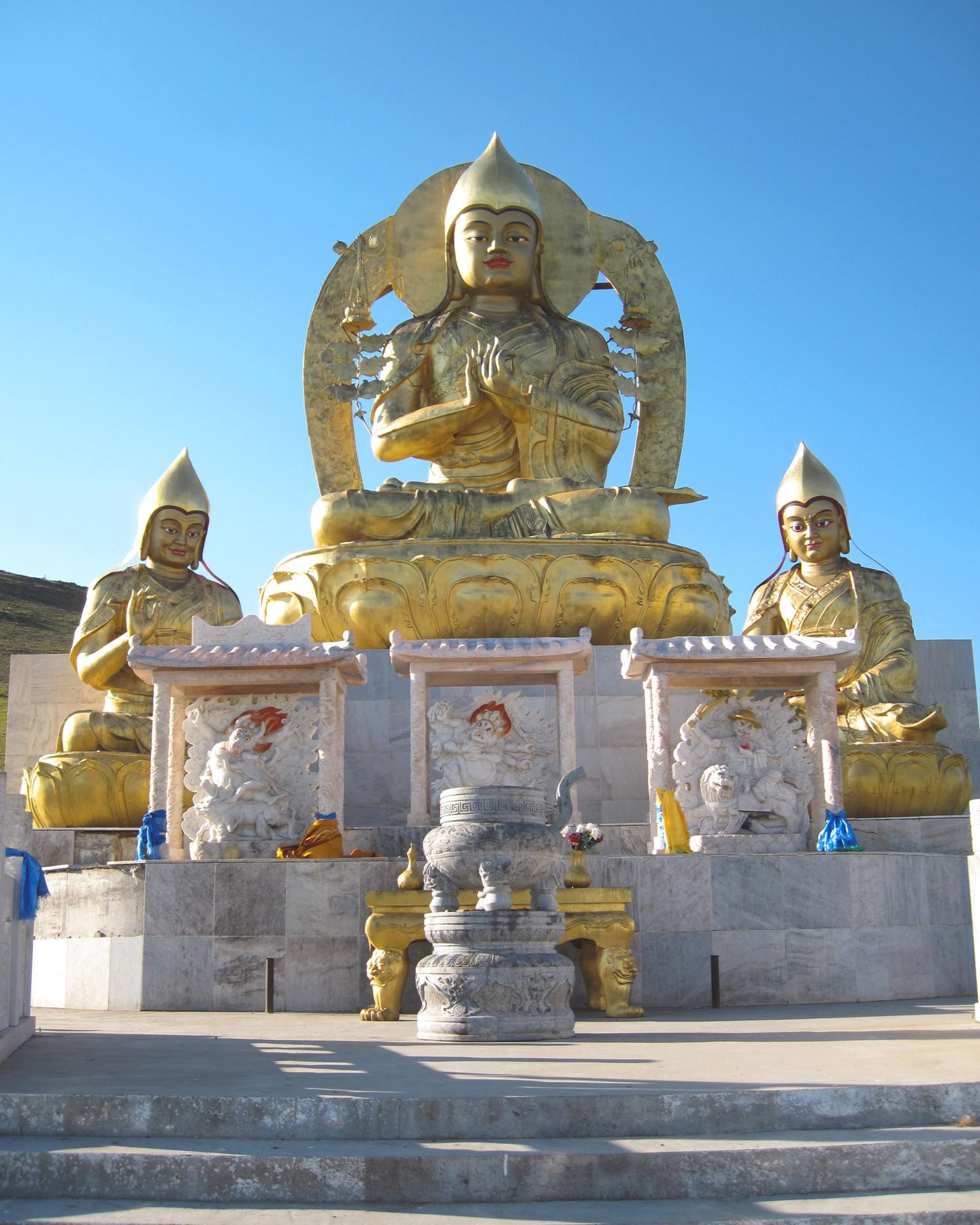 The interior of Amarbayasgalant is grand and dim. A thousand Buddhas bear witness to centuries of worship from a glass-encased back wall. Old photos swirl with incense, fabric-wrapped columns soar to the intricate ceiling, golden icons are scattered throughout, and a dragon-adorned drum patiently waits for a drummer. In the center, under beams of gauzy light, cushioned benches face each other, but the back rows on both sides are now bare, a sign of the times. The resident population of monks, once hundreds strong, is down to fewer than 40. 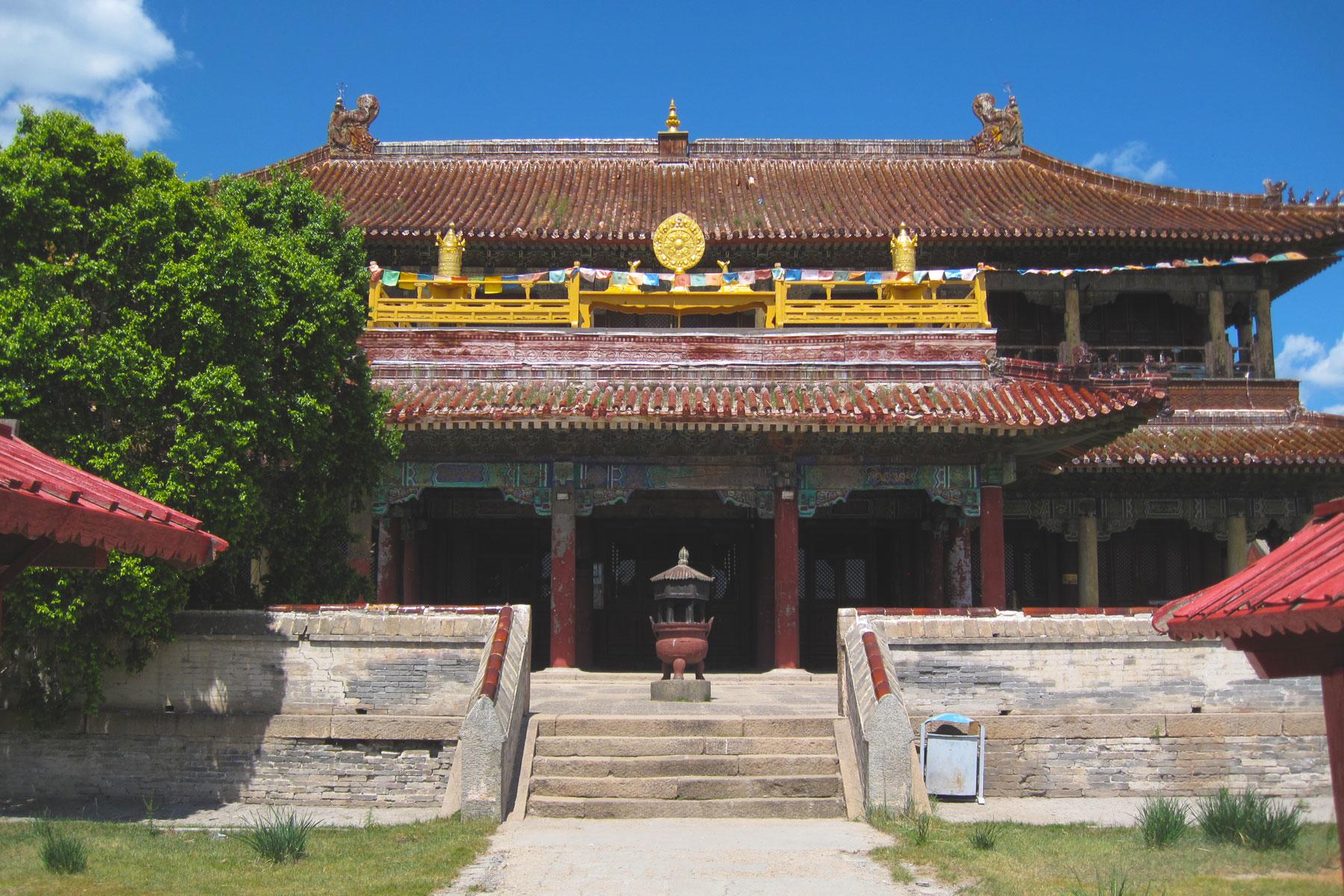 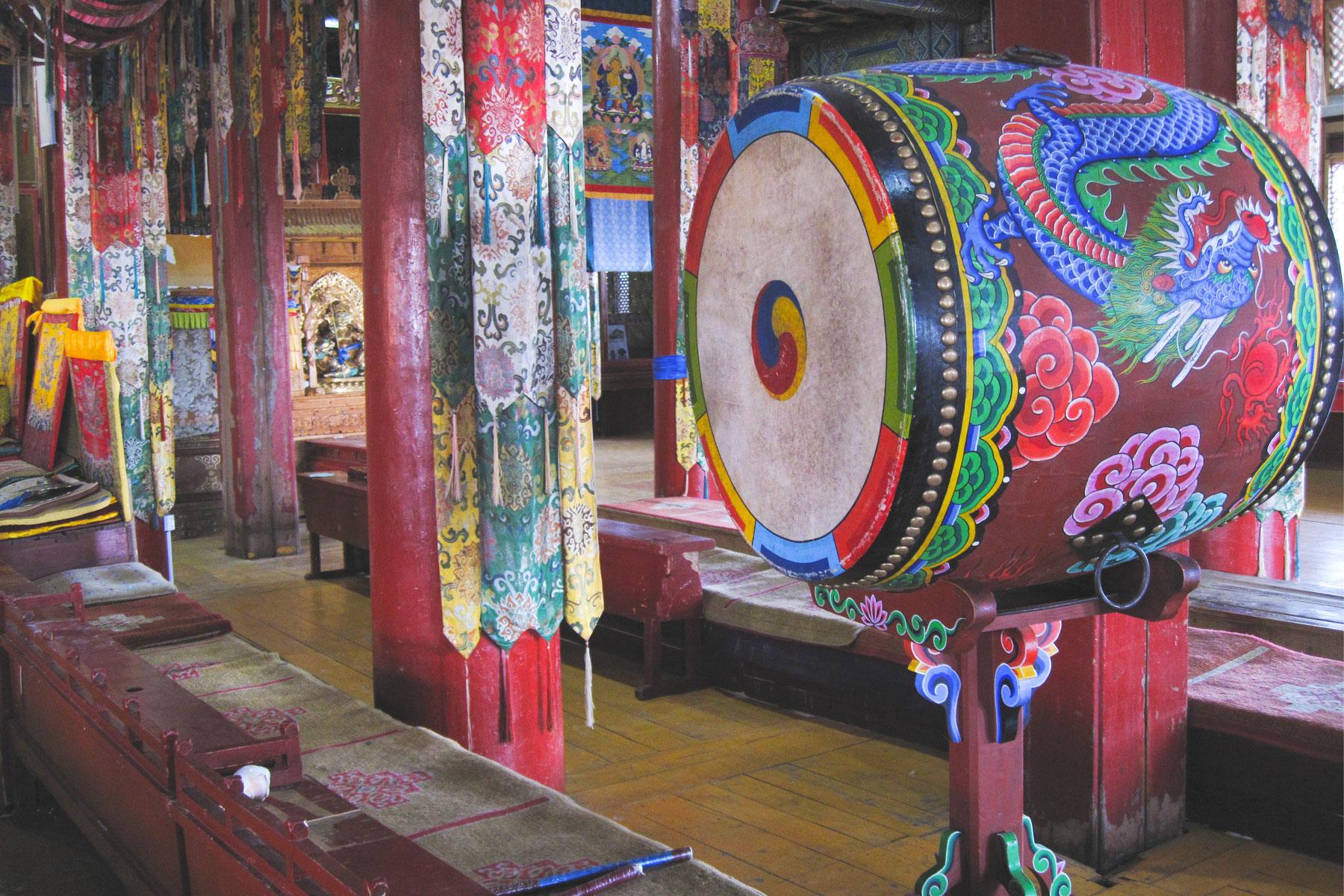 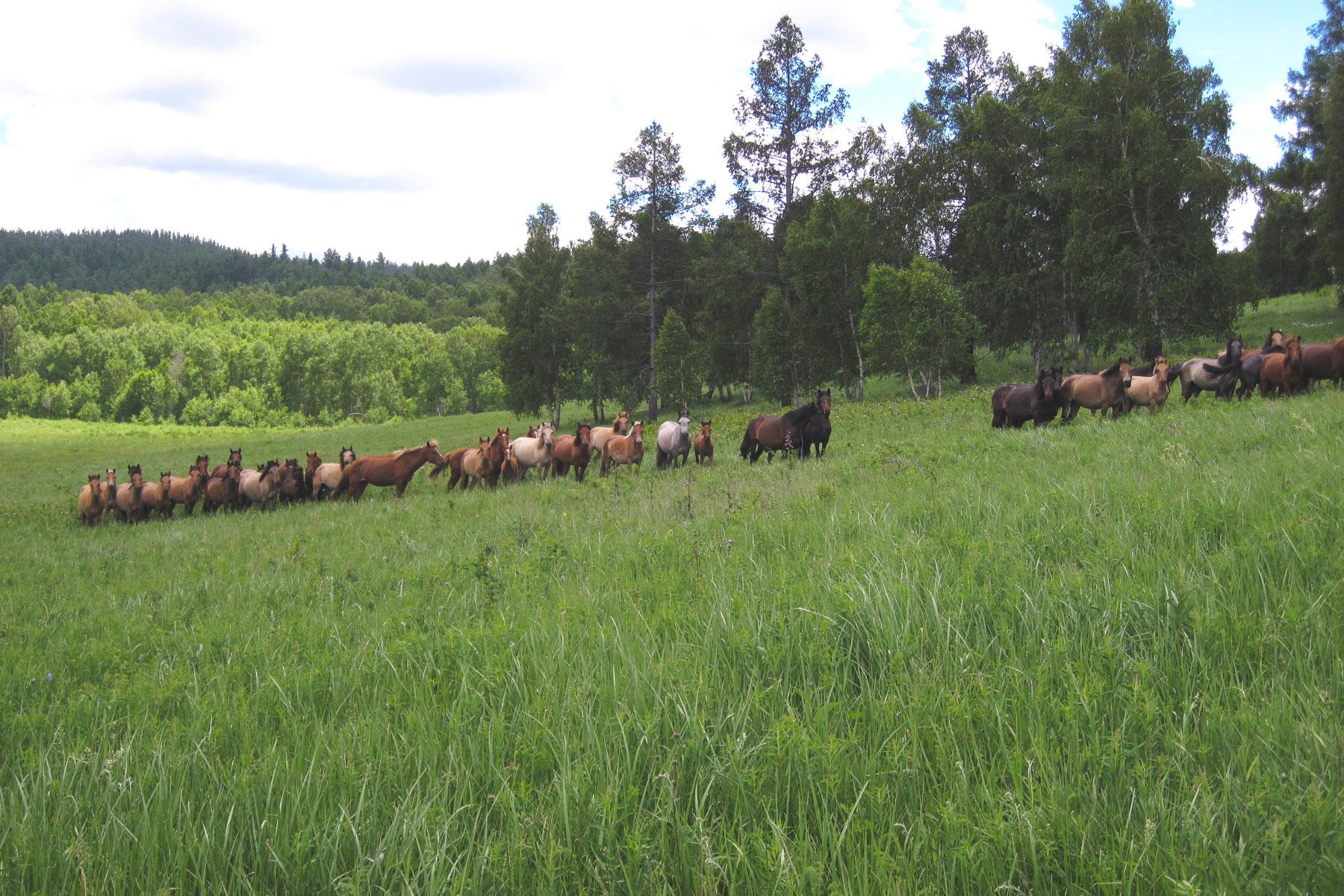 Tradition still abounds, however, and the summer months are devoted to ceremonies. Apprentices in golden headgear announce a commencement with tinny horns from a second-floor balcony. When not in uniform, these novices are almost indistinguishable from 21st-century youth with their flat-brimmed caps and soccer jerseys. If you’re lucky to witness a ceremony, you’ll find the future monks of Amarbayasgalant chanting dutifully alongside the elders, flipping pages of their texts to follow along. It’s almost possible to return to a bygone era … until out of the folds of a saffron robe a youngster sneaks a glance at his smartphone.

A window into the past is nearly closed. Grab a map and a backpack before it’s too late.