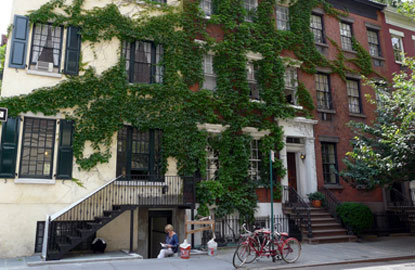 This week, Fodor’s takes you on a tour of Greenwich Village’s literary past. To see other great routes through our favorite NYC neighborhoods, check out The 6 Best New York City Walking Tours Slideshow.

Although Greenwich Village was New York’s toniest neighborhood during the 19th century, the 20th century saw an influx of Bohemians from all over the world eager to take advantage of the area’s cosmopolitan nightlife and cheap rents on the western fringes. The Village came to rival Paris’s Left Bank, as poets, playwrights, and novelists staked out their own personal literary terrains. This NYC walking tour, just under two miles long, lets you walk in the footsteps of literary giants, exploring the Village’s maze of streets. See the interactive map below for turn-by-turn directions. 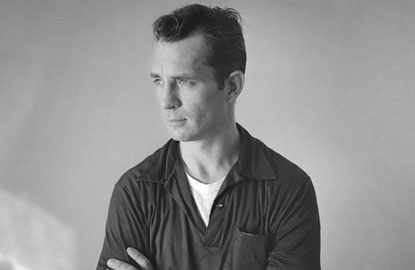 Now home to a mediocre Italian restaurant, this corner spot used to be the San Remo café, one of the major focal points of New York’s literary bohemia in the 1950s and ’60s. Writer Dawn Powell referred to it as one of four bars that defined the boundaries of the "the cultural and social hub of New York City" in her 1962 novel The Golden Spur. Playwright Tennessee Williams, Welsh poet Dylan Thomas, and African-American novelist James Baldwin all frequented the bar, which was celebrated for its late hours. However, it was the Beat poets who really made the San Remo a landmark. Allen Ginsberg, William S. Burroughs, and Jack Kerouac (pictured) regularly gathered here, and the San Remo even appeared in some of their works. Kerouac recast the cafe as "The Mask" in his autobiographical 1958 novel The Subterraneans, and it was also the setting for Beat novelist John Clellon Holmes’s 1952 novel Go.
Address: Corner of Bleecker St. and McDougal St. 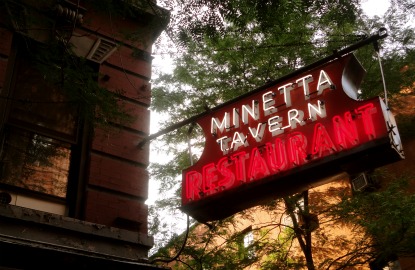 During Prohibition, this was the site of the Black Rabbit speakeasy, frequented by numerous literary figures, such as author John Dos Passos and playwright Eugene O’Neill. The speakeasy also rented out its basement to the very un-Bohemian founders of Reader’s Digest, who printed its first issues here in 1923. In 1937, the spot became the Minetta Tavern and soon attracted such heavyweights as the novelists Ernest Hemingway and F. Scott Fitzgerald and the poets Dylan Thomas, e.e. cummings, and Ezra Pound. But few made this their home as much as the local eccentric Joe Gould, who received his mail here and spent much time holding forth on his monumental work-in-progress, An Oral History of Our Time, which upon his death turned out to have been a hoax 20 years in the making. The manuscript didn’t exist.
Location: 113 MacDougal St., between Bleecker and West 3rd Sts
Learn More: Fodor’s Minetta Tavern Review 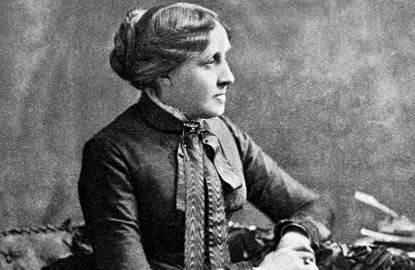 Built by the uncle of Louisa May Alcott in 1852, these two joined brick row houses were home to the author from 1867 to 1870. During this period, the Concord, MA, native wrote every afternoon at a desk by one of the second-storey windows. Although it’s unclear how much of her masterpiece Little Women was penned at this address, she certainly finished it here in 1868 before returning to New England two years later. Interestingly, Alcott’s alter ego in the book, Jo March, moves to New York City but finds it unfavorable for her literary ambitions and returns home. 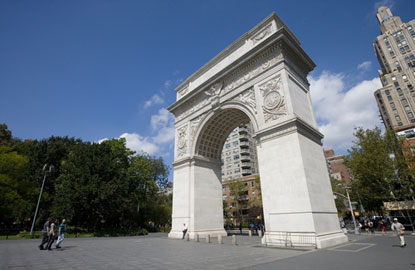 Ever since it became a public park in 1827, Washington Square Park has served as the spiritual home, playground, and meeting place for Greenwich Village. Robert Louis Stevenson and Mark Twain shared a bench together here in 1888, discussing the implications of fame and mass readership. Henry James, who grew up nearby, praised the park for its "established repose which is not of frequent occurrence in other quarters of the long, shrill city." Willa Cather wrote glowingly of the "mist of rainbow water" given off by the central fountain in her 1920 short story "Coming, Aphrodite." Given its proximity to the local bars and cafes, the park became a natural hangout for the Beat poets during the 1950s and 60s, notably Jack Kerouac, who was somewhat obsessed by the park’s earlier incarnation as a cemetery. Many of the Beats gave impromptu public readings here, most famously Allen Ginsberg in 1966, who concluded by urging his audience to go forth and spread the word that the Vietnam War was over in the belief that enough mass declarations would bring an end to the conflict. 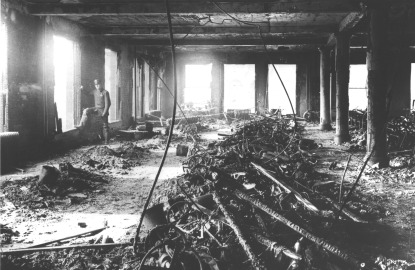 On March 25, 1911, this building was the scene of one of the worst tragedies in New York’s history, when fire broke out in the Triangle Shirtwaist Company, a sweatshop that occupied the top three floors. Nearly five hundred garment workers were employed here, and 146 died. Scores of people jumped or fell from the buildin to their deaths to the horror of onlookers who rushed over from Washington Square Park. The disaster shocked New York and led to sweeping reforms in the city’s labor laws. It has also figured in several literary works, most recently Kenneth Baker’s 2002 novel Dreamland and Michael Cunningham’s 2005 novel Specimen Days. The building now belongs to New York University. 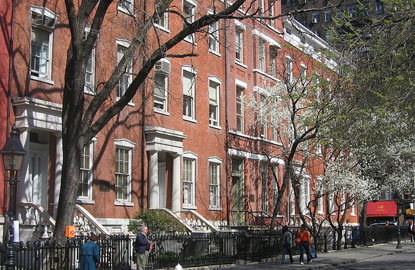 The well-preserved Greek Revival houses along Washington Square North were home to the loftiest echelon of nineteenth-century New York’s high society. Henry James set his famous 1880 novel Washington Square among these patrician homes, which he knew very well—his grandmother lived at no. 18 in a building that has since been torn down. His friend and fellow author Edith Wharton lived at no. 7 for a year in 1882. A few doors down at no.3, John Dos Passos began work on his masterpiece, the 1925 novel Manhattan Transfer, when he lived here briefly. The celebrated critic and author of To the Finland Station Edmund Wilson resided in the same building from 1923 to 1925. 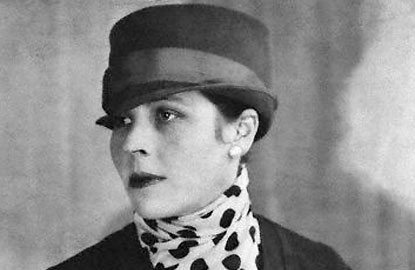 Patchin Place is a gated tree-lined lane whose tranquility presents a sharp contrast to the hubbub of the Village. Some of New York’s brightest literary legends have lived in these cozy brick houses, which were built during the mid-nineteenth century. The journalist John Reed spent his last years at no. 1 with his wife Louise Bryant, while writing his eyewitness account of the Russian Revolution Ten Days that Shook the World. At no. 4, the avant-garde poet e.e. cummings lived from 1923 to 1962. The reclusive author Djuna Barnes (pictured) lived at no.5 from 1940 to 1982, venturing out so rarely that legend has it cummings would call out "Are you still alive, Djuna?" from his window. Poets Ezra Pound and John Masefield, novelists Theodore Dreiser and John Cowper Powys, and short story writer O’Henry all once lived in Patchin Place.

Location: Off of 10th St. between Greenwich Ave. and 6th Ave. 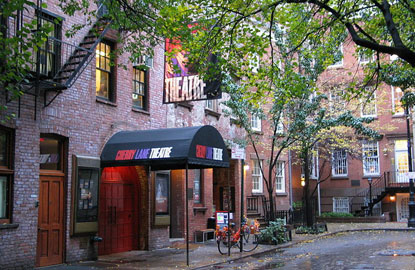 The Cherry Lane Theatre occupies an 1836 brick building that was initially a brewery and later a tobacco warehouse. In 1924, the poet and playwright Edna St. Vincent Millay and a group of friends converted it into the Cherry Lane Playhouse. Over the years, Cherry Lane has brought some of the world’s most important dramas to the stage, including works by Eugene O’Neill, Clifford Odets, Eugene Ionesco, Gertrude Stein, Edward Albee and Harold Pinter. Samuel Beckett had a particularly special relationship with Cherry Lane: his Endgame had its US premiere here in 1958, and Happy Days had its world premiere here three years later. Today, the theater is New York’s oldest continuously running off-Broadway theater. 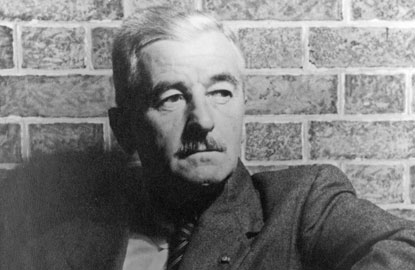 Chumley’s—which closed after a fire in 2007—began its life as a speakeasy in 1926. After Prohibition ended, the bar kept its clandestine appearance, with no sign out front and a back-door entrance onto an alleyway leading to Barrow Street. This was a favorite spot for writers, including William Faulkner (pictured), F. Scott Fitzgerald, Ernest Hemingway, and Eugene O’Neill. Edna St. Vincent Millay was a regular and briefly lived upstairs. Book dust jackets—many autographed by regulars—lined the walls. Village lore has it that the expression "to 86 someone" (or ban them from a bar) originated at Chumley’s and refers to the bar’s address. 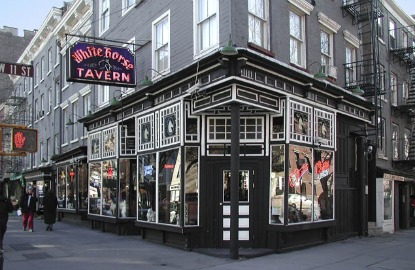 One of the Village’s oldest and most beloved watering holes, the White Horse drew its first draughts for longshoreman in 1880. This was the favorite stomping ground of poet Dylan Thomas—though the story of him dying here after downing 18 whiskey shots is an urban myth. The reality is that the hard-drinking Welshman, who was under medication for depression, made the outlandish boast of consuming 18 whiskeys after returning from a two-hour stint at the White Horse, then slept it off before resuming his drinking the next day. He later collapsed at the Chelsea Hotel and died at St Vincent’s Hospital. Other famous writers including Malcolm Lowry, Anaïs Nin, and James Baldwin hung out at the bar over the years, and Norman Mailer allegedly got the idea for founding the Village Voice while imbibing here. Jack Kerouac was kicked out on numerous drunken occasions, and, in his 1965 novel Desolation Angels, mentions finding the words "go home, Kerouac" scrawled on the bathroom wall. Step inside for a cocktail if you wish. Who knows—you may be sitting beside the next Great American novelist.
Location: 567 Hudson St., at W. 11th St.
Learn More: Fodor’s White Horse Tavern Review