While amusement parks consistently wow visitors with record-breaking speeds and new technology, carousels tap into our collective nostalgia, hearkening to a simpler time of a bygone era. Generations converge on the spinning platforms as horses gallop, organs blare, and brass rings descend. From a stunningly modern glass carousel to a long-standing relic that dates back to the 1800s, these are country’s best carousels.—Zachary Laks 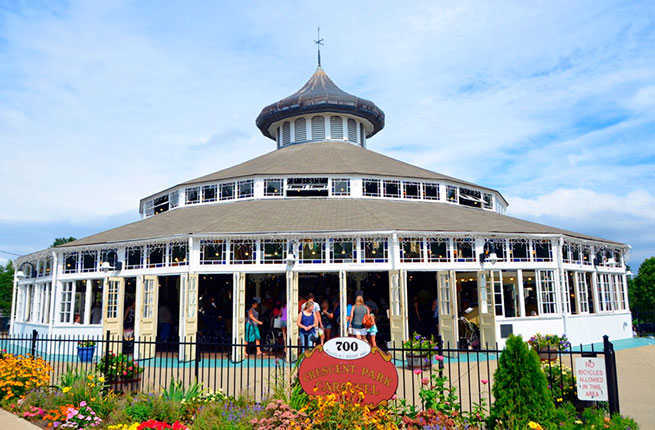 Located on the banks of the Providence River, the Crescent Park Looff Carousel is an authentic merry-go-round that has been in operation since 1895. The carousel’s menagerie includes 61 horses, one camel, two coaches, and two double chariots. 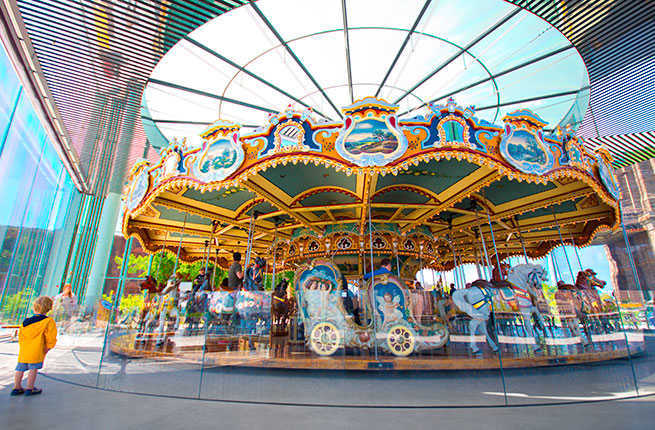 Jane’s Carousel is a highlight of Brooklyn Bridge Park, where art installations, ice cream, and unbeatable views attract crowds in droves. This pristine antique was built by the Philadelphia Toboggan Company in 1922, and features a classic 3-row setup with 48 carved horses and two chariots. Formerly known as the Idora Park Merry-Go-Round, the carousel was given new life when DUMBO-based artist Jane Walentas saved the attraction at an auction in 1984, dutifully restoring the carousel’s elegant wood carvings. Due to Walentas’ tireless dedication to the charming amusement, it truly is Jane’s Carousel. 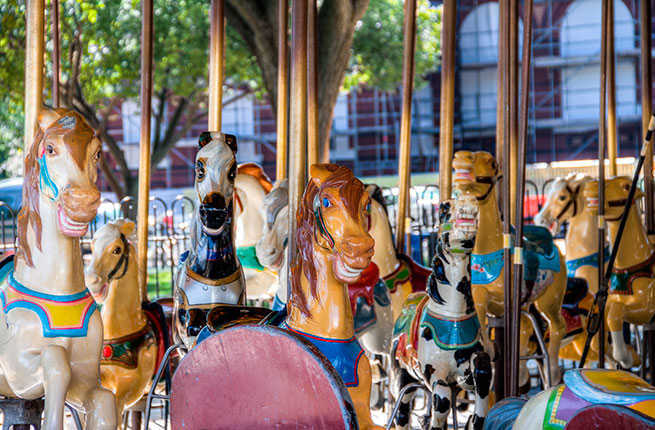 The Smithsonian Carousel is a family must on the National Mall. Constructed by the Allen Herschell Company in 1947, the carousel is a one-of-a-kind traveling machine. Rows of four horses—60 in total—jump around the carousel as oom-pah-pah organ favorites are piped in from speakers. The attraction operates year-round, delighting all ages. 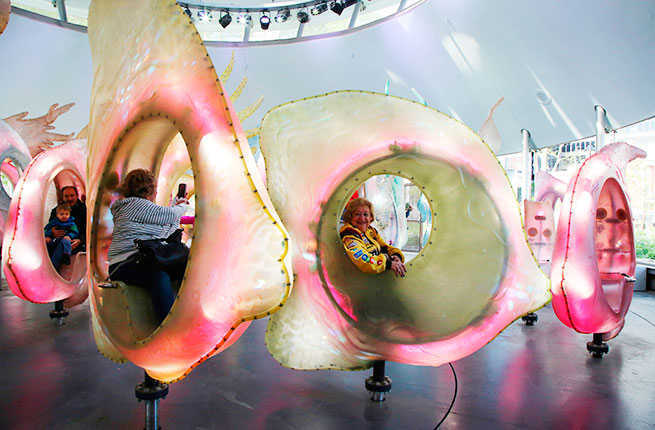 Located at The Battery Conservancy, SeaGlass Carousel is a stunning new addition to lower Manhattan. Picture-perfect iridescent fish glide in circles to capture the essence of an underwater adventure on this truly unique carousel. When planning your visit, opt for a night ride as the glow of the ride’s 30 unique sea creatures cast an illuminating spell on Battery Park after sunset. 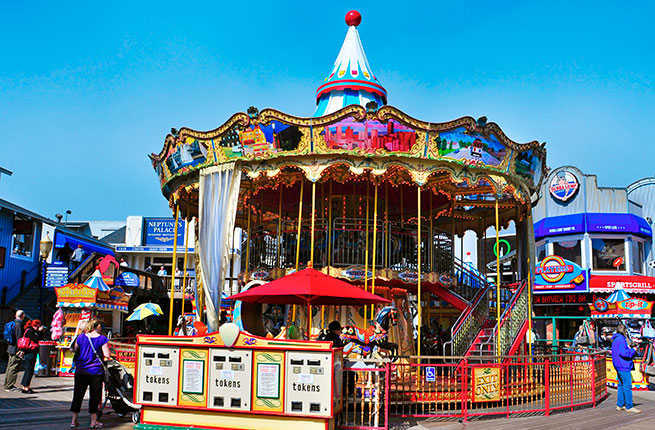 San Francisco’s PIER 39 glows bright with the 1,800 twinkling LED lights on the San Francisco Carousel. An Italian work of art, the double-decker carousel honors San Francisco’s landmarks with hand-painted murals featuring the Golden Gate Bridge, Coit Tower, and the popular California sea lions at PIER 39. Children revel in the 32 animals that fill the carousel, ranging from exotic sea dragons and dolphins to classic horses and chariots. For the more adventurous, spinning tubs on board offer a create-your-own-thrill experience. 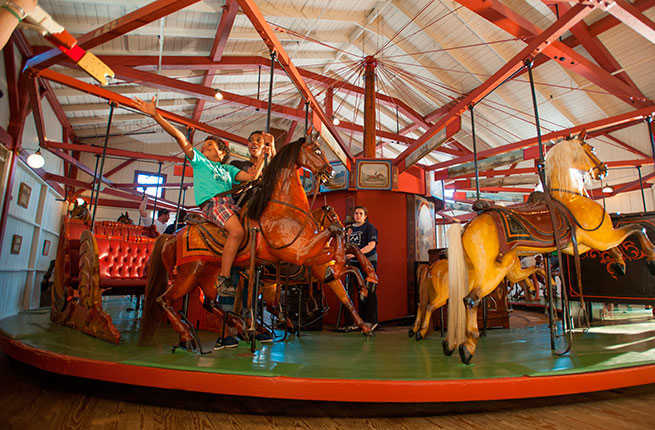 The nation’s oldest operating carousel, the Flying Horses Carousel takes riders on a journey back in time with its 20 vintage horses. Built in 1876, the carousel was moved to Martha’s Vineyard from Coney Island in 1884 and it was designated a National Historic Landmark in 1987. Look out for the metal rings that descend on the arm from the middle of the ride as the brass ring grants a free ride token. 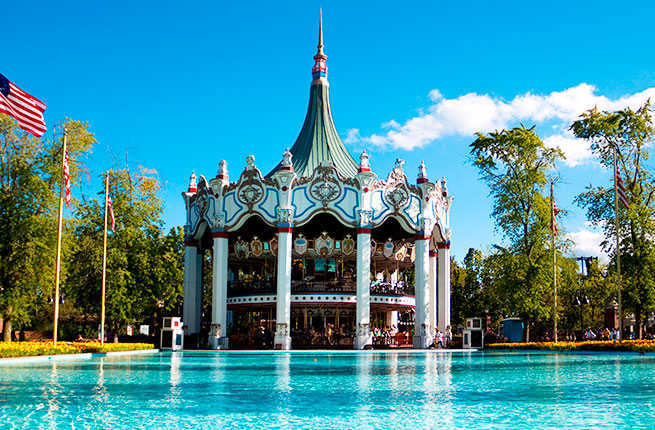 The Columbia Carousel is the first stunning visual that greets park-goers at Six Flags Great America.  Standing in regal form at the base of a large reflecting pool, the ride is one of the world’s largest carousels (a title shared with its nearly-identical sister attraction found at California’s Great America). The double-decker carousel is home to 106 horses, animals, and chariots. More than a thousand lights line its grand gazebo structure. 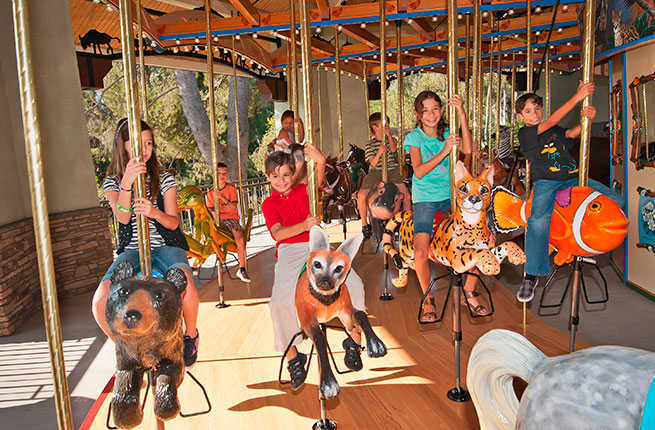 The Tom Mankiewicz Conservation Carousel is a highlight of the Los Angeles Zoo, showcasing a wide variety of endangered animals. With fixtures that go beyond the standard horse and buggy, the 2011 carousel features 64 hand-carved animals, including an armadillo, a baby rhinoceros, a lioness, a gorilla, a skunk, and a caterpillar. Keeping with the low-key vibe of its surroundings, the carousel forgoes the traditional organ music in favor of the mellow tunes of Herb Alpert & the Tijuana Brass, the Carpenters, and Cat Stevens. 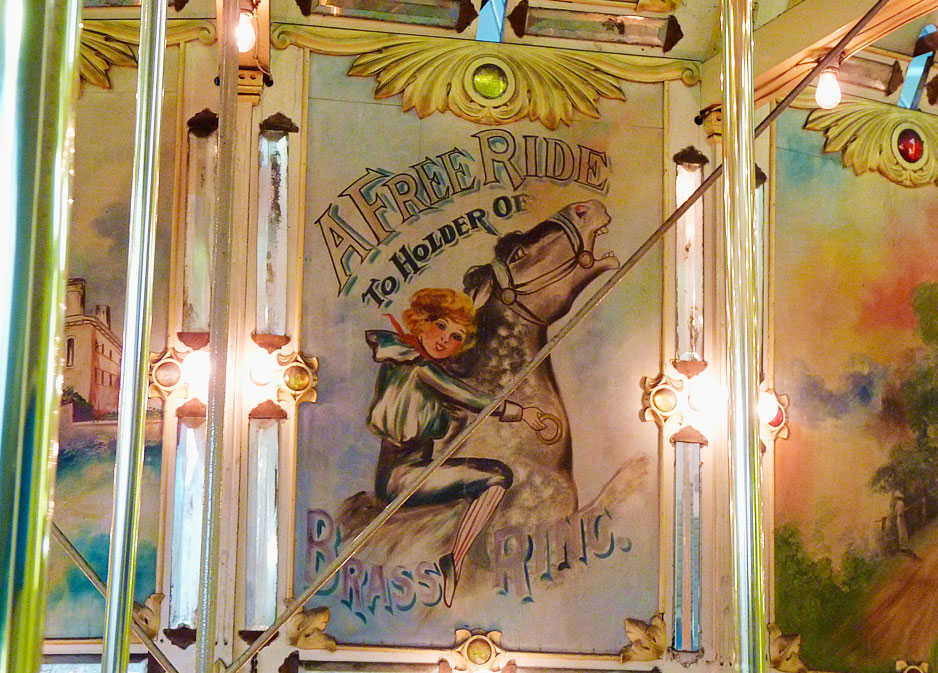 An iconic landmark at the end of Ocean City’s historic boardwalk, the Herschell-Spillman Carousel stands as one of the oldest continually operating carousels in the country. Brimming with old-world charm, the ride’s 45 animals, three chariots, and rocking chair have been delighting riders in the same spot since 1912. The Herschell-Spillman stands out for its superb German-based artistry and woodworking, featuring museum-quality intricacies on the details of the animals—note the incredible texture of the ostrich, the hyper-real finishes on the camel, and the life-like roses seen on the horses. 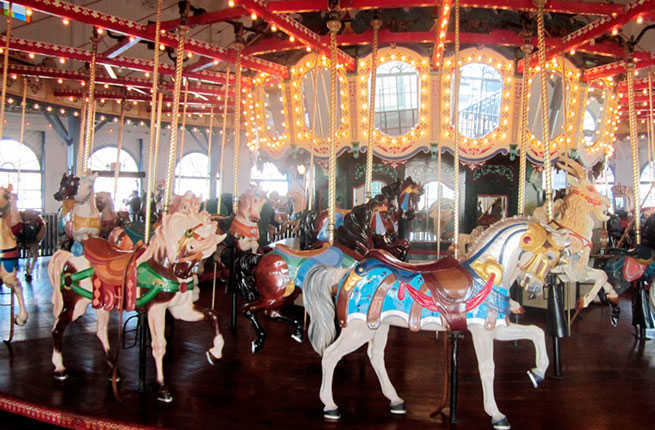 Santa Monica Pier Carousel is a timeless relic of seaside fun that dates back to the 1920s. Wooden animals fill the wheel and kids race to pick out the most appealing of the 44 horses, one rabbit, two sleighs, and one sought-after goat. The merry-go-round sits in a weather-proofed Byzantine-Moorish hippodrome complex that was built in 1916.  As the oldest building on the pier, the carousel is a nostalgic gem among the over-developed and commercialized Santa Monica Pier. After a spin on the old-fashioned ride, complete the experience with a stop at the adjacent vintage soda fountain, Soda Jerks.