News Apeksha Bhateja It's a Tie: The 2 Most Annoying Airline Passenger Behaviors of 2022
NewsExchanging Your Money Abroad: 10 Simple Tips 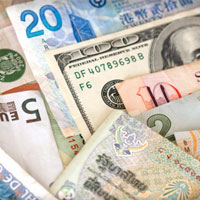 One question I see a lot in the user forums here on Fodors.com is how best to get foreign currency when traveling abroad. When I first started traveling abroad, there were two basic choices: take and exchange cash or take and exchange traveler’s checks. I usually did the latter. How times have changed. Now, anyone younger than 25 might look at me with a raised eyebrow if I mentioned a traveler’s check. But the question still persists. With bank fees rising every year and exchange rates seemingly in constant flux, what’s the best way to change your money? There are many threads on this subject in our user forums. Here are some simple rules to follow.

1. ATMs are still the best choice for day-to-day funds.

Although some banks have high fees to use foreign ATMs, not to mention adding on high foreign-transaction fees (Bank of America, for example, charges $5 per withdrawal plus 3% premium on top of each withdrawal at a non-partner ATM), the ATM is still almost always the cheapest option for changing your money. And if your bank has international ATMs or partner banks abroad, you can sometimes save a little on your cash withdrawals; that’s true even at BOA, which charges just 1% at member banks and no other fees. Capitol One Bank charges nothing for a foreign ATM withdrawal, while other banks such as Chase charge 3% on top of every withdrawal as well as a $3 fee. It pays to shop around for a bank if you travel a lot internationally.

2. “No-fee” bureau de change are usually the most expensive places to change money.

When you see a sign that offers “no-fee” currency exchange, be sure to check the rates. You’ll notice that they are almost always significantly worse than what you’d get if you had simply taken money out of an ATM. It’s a good idea to keep up to date on the latest Interbank rates (the rates banks pay for foreign currency) to find out if you are getting a good deal. A web site like www.xe.com can give you those rates, which change daily. At best, you normally pay between 4% and 9% of the total amount you are exchanging to change money into a foreign currency, and this cost is usually built into the bad exchange rate. You pay again to change your euros or pounds back into dollars, so think carefully how much cash you actually need on a day to day basis.

3. If you need a lot of cash, ask your bank to raise your daily withdrawal limit.

Say you are renting an apartment for a week in Rome or Paris and you need a lot of euros at once to pay the landlord, your bank may be able to raise your daily withdrawal limit temporarily to allow you to withdraw much more money than you would normally be allowed to take out. ATMs may have smaller withdrawal limits, but you can make multiple withdrawals from the same ATM or from several ATMs in that case. If you can’t get enough cash to pay for a week in advance, perhaps your landlord will allow you to pay in several installments throughout your stay. If you have a traveling companion, you can both withdraw cash to make the initial payment.

4. Never take a cash advance on your credit card except in a dire emergency.

If you take cash from a foreign ATM, you will pay a fee; you’ll be charged a percentage on top of your withdrawal as a foreign-transaction charge; and you will start to pay very high interest (sometimes up to double the regular interest rate you are charged on your credit card) the moment the cash reaches your hands. It’s a pretty bad deal. Avoid it at all costs unless you have no other choice. Bank of America has pretty egregious fees, as posters in our forums have found.

5. Use credit cards for large purchases.

Most credit cards charge a foreign-transaction fee of between 1% and 3% whenever you buy something abroad, but this is still the safest and often the cheapest way to make a large purchase. You’ll almost always come out ahead on the conversion since credit cards add their fee on top of the Interbank rate. So you are almost always getting the best possible rate of exchange even though you are paying a fee. (And some banks, like Capital One, still do not charge anything extra for foreign purchases beyond the 1% that Visa and Mastercard charge; some credit unions also have very low fees, though membership in credit unions is usually limited.) Other banks, including Citibank, really gouge consumers by charge a 3% foreign-transaction fee even if the purchase is made in U.S. dollars.

If you are ever given the opportunity to charge your purchase abroad in U.S. dollars, decline. In fact, you should insist that you be charged in the local currency. So-called dynamic currency conversion not only offers lousy exchange rates, but it also includes hidden fees, and your own credit card will charge you its own foreign-transaction fee on top of the cost of the purchase. In effect, you will be paying double the fees and getting a bad exchange to boot. You might pay a 10% premium for a purchase. Here is one discussion of the process from our forums. Just remember, you are always charged a foreign-transaction fee by your credit card company (if it charges such fees) whether your purchase is made in dollars or foreign currency.

It’s very simple. Use your debit/ATM card to make cash withdrawals. Don’t use it to make purchases. If something goes awry, your account will be debited immediately for the purchase; even if you return something for a refund, your account may not be credited for several days (perhaps for more than a week if the purchase is made abroad). If a sales clerk makes a mistake, it could take several days for an erroneous charge to be credited back to your account. With a credit card, you might never notice that a particular charge has appeared and disappeared because it will never show up on your statement. But it’s different with a bank account. The money actually disappears and may not come back for several days even if it’s an error or even if a transaction is cancelled. You might need that cash in the meantime.

8. The Chip-and-PIN situation in Europe.

Most European countries now offer credit and debit cards with a computer chip that requires a PIN to activate and make a purchase. This is especially common in automated ticket machines in Europe, even on European toll roads. If your credit or debit card doesn’t have a chip and PIN (hardly any U.S. credit or debit cards do), then you may not be able to buy a ticket from a machine with your card. Although both Visa and Mastercard promise U.S. cardholders that their cards are usable anywhere in the world where they should be accepted with just a signature, you may still have some occasional problems in Europe using your card. Posters in our user forums have discussed this issue here. The subject was also covered earlier this year on SmarterTravel.com.

9. Traveler’s Checks are a good fallback in an emergency.

Although the predominance of ATMs has made some people feel that the simple traveler’s check is a relic of a bygone era, it can still be a godsend in an emergency. It’s true that few places in the world still accept traveler’s checks as payment. Normally, you must change them in a bank and will be charged a hefty fee for the privilege (though in some destinations like Mexico, it can be difficult to find a bank that will exchange your traveler’s checks). But if you can buy your traveler’s checks without paying a fee, they are a good fallback as an emergency stash of cash. And if you have American Express checks, they can still be cashed in an Amex office abroad. While these aren’t as prevalent as they once were, they are still found all over Europe and in many other countries.

10. A Ben Franklin is also a great emergency reserve.

A crisp, new US$100 bill is also a good fallback as an emergency reserve of cash. While I would not travel abroad with a big stack of cash, having a single $100 bill somewhere separate from your other travel money is a great idea. Even if you lose substantially on the currency exchange, it’s a currency that’s accepted worldwide.