Portugal's town of Sesimbra hosts an annual Clown Parade is thought to be the largest in the world.

Scenic, sedate Sesimbra sits pretty in a sheltered bay at the foot of the Serra da Arrabida mountain range in Portugal, popular with daytrippers from nearby Lisbon. The quiet fishing village is famously one of the best destinations in Portugal to eat fresh fish and seafood (the town motto is “Sesimbra is fish”), but it’s also famous for hosting an event that would scare the bejesus out of any clown-phobic visitor. Each February (or occasionally March, depending on when Easter falls each year), the village hosts one of the largest clown congregations on the planet, as part of its lively Carnival celebrations. 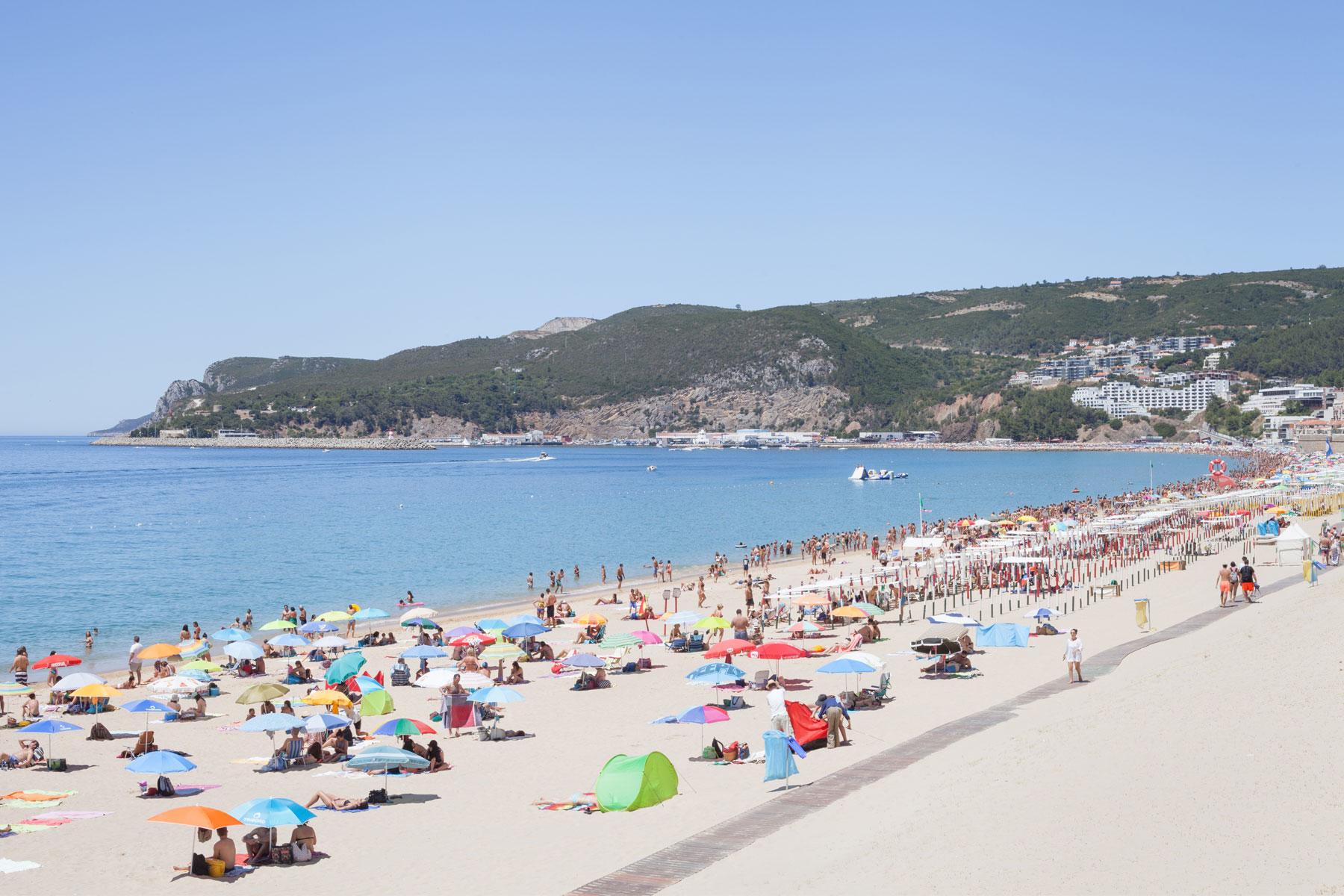 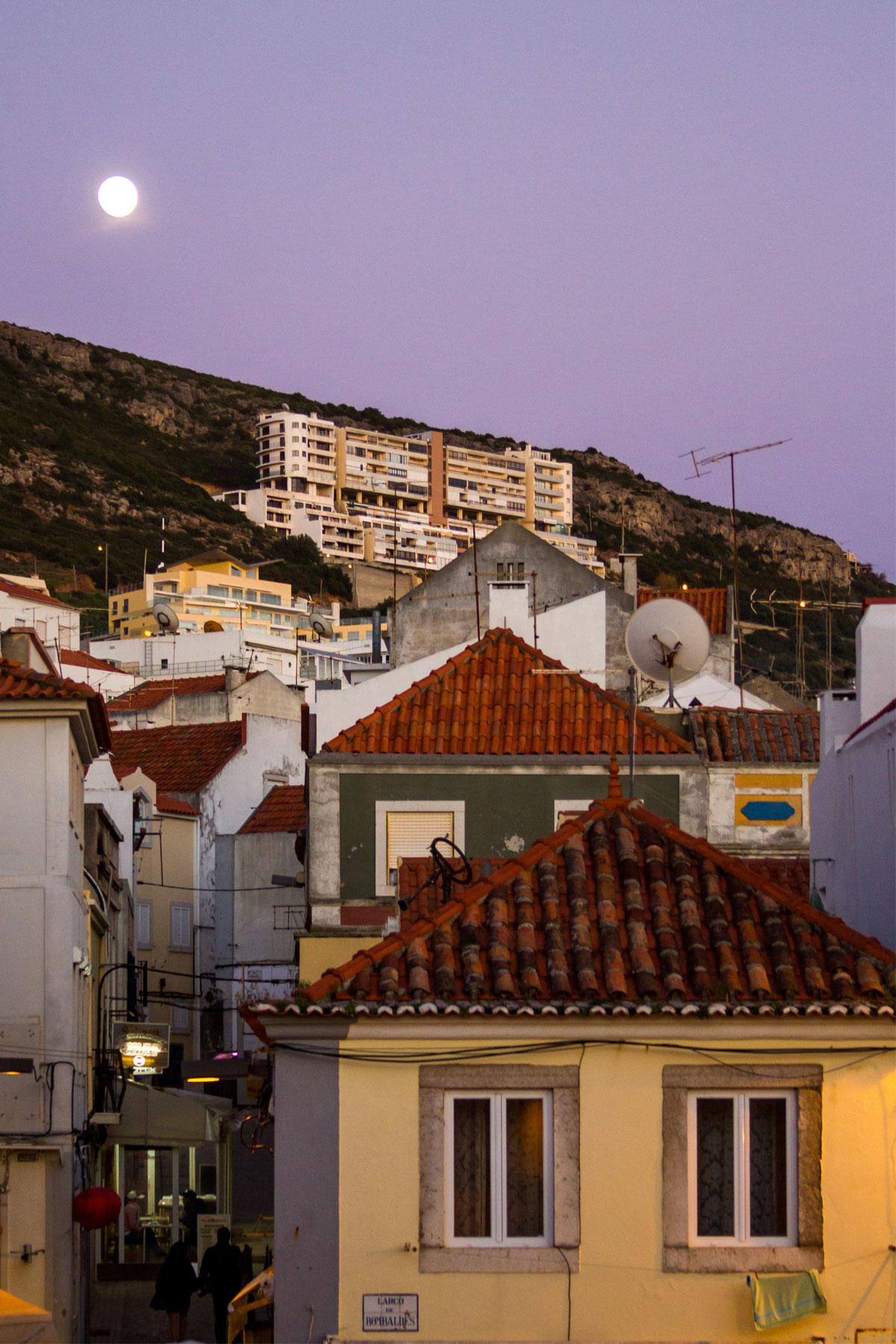 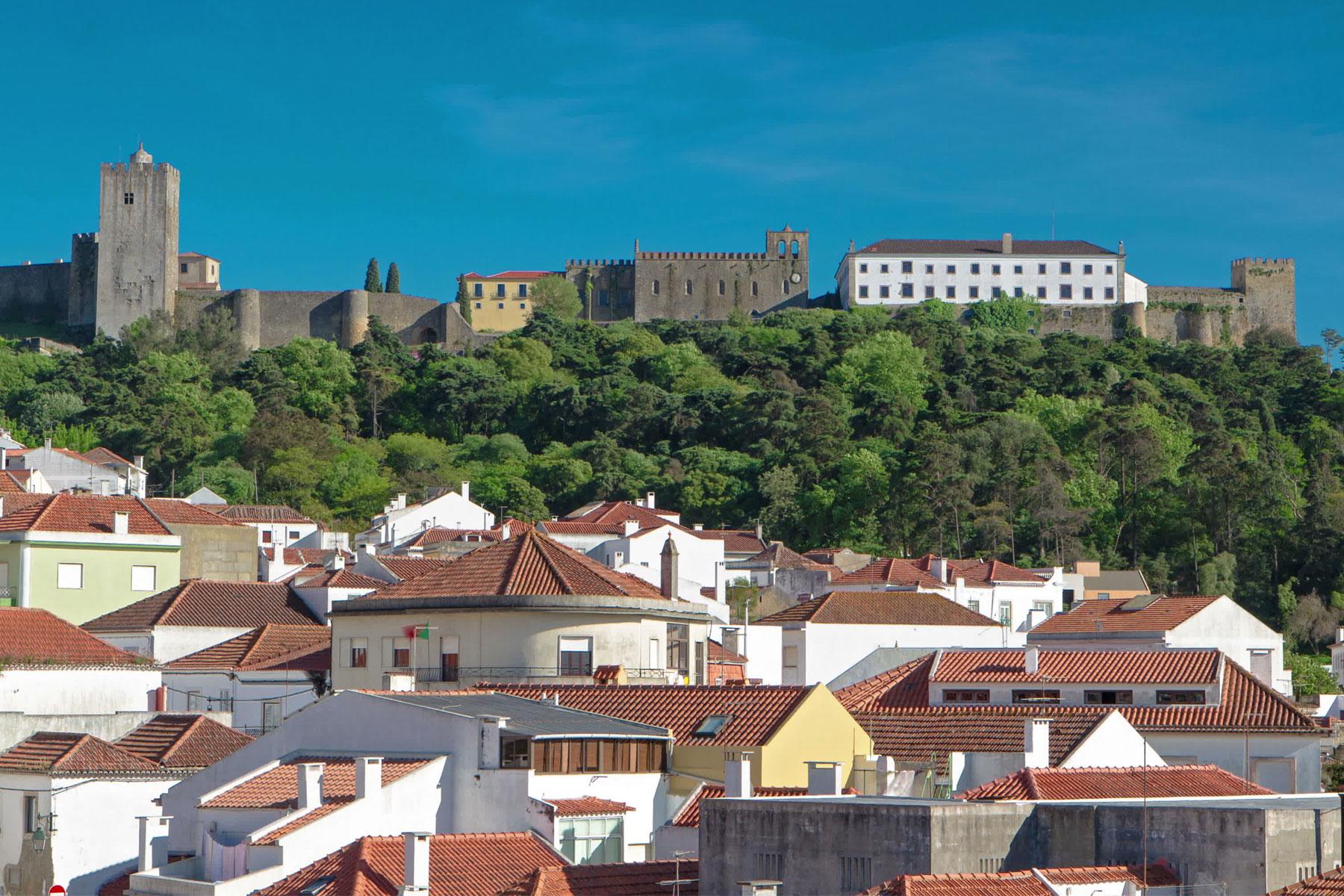 On the Monday of Carnival week, the town is overrun with palhaços (clowns), who gather in their thousands to parade along the beachfront to the delight of the local schoolchildren and the sheer terror of anybody who has recently watched the clown-horror film It.

The result is truly a sight to behold, as clowns in their thousands congregate at key vantage points such as the town’s old fort, and anybody dressed in a non-clown like fashion is going to be very much an odd one out (even the dogs are in costume).

In what the town council believes is the biggest clown parade in the world, the annual Cortejo de Fantasias de Palhaço sees some 4,000 fright-wigged, squeaky-nosed participants make their way through the pretty town’s cobbled streets, while locals enter into the carnival spirit by donning clown costumes to go about their day jobs— whether that’s working shop tills or serving drinks. It’s common to see colorfully-dressed clowns waiting for buses in the town’s rural, hilly suburbs, or casually chatting among themselves as they share a jug of sangria.

The clown parades have been growing since 1999 when they began as something of a brincadeira (joke) among a group of friends who wanted to bring a little more color and animation to the town’s rather sedate Monday afternoon Carnival parades.

For reasons that could possibly have been booze-inspired, the group of friends hit upon the idea of creating the world’s biggest and best clown gathering. Starting out as a low-level event, the clown theme quickly caught on, and the numbers of painted participants have been growing each year to become as much a part of Sesimbra’s cultural identity as its pretty beaches, grilled fish, and colorful murals. 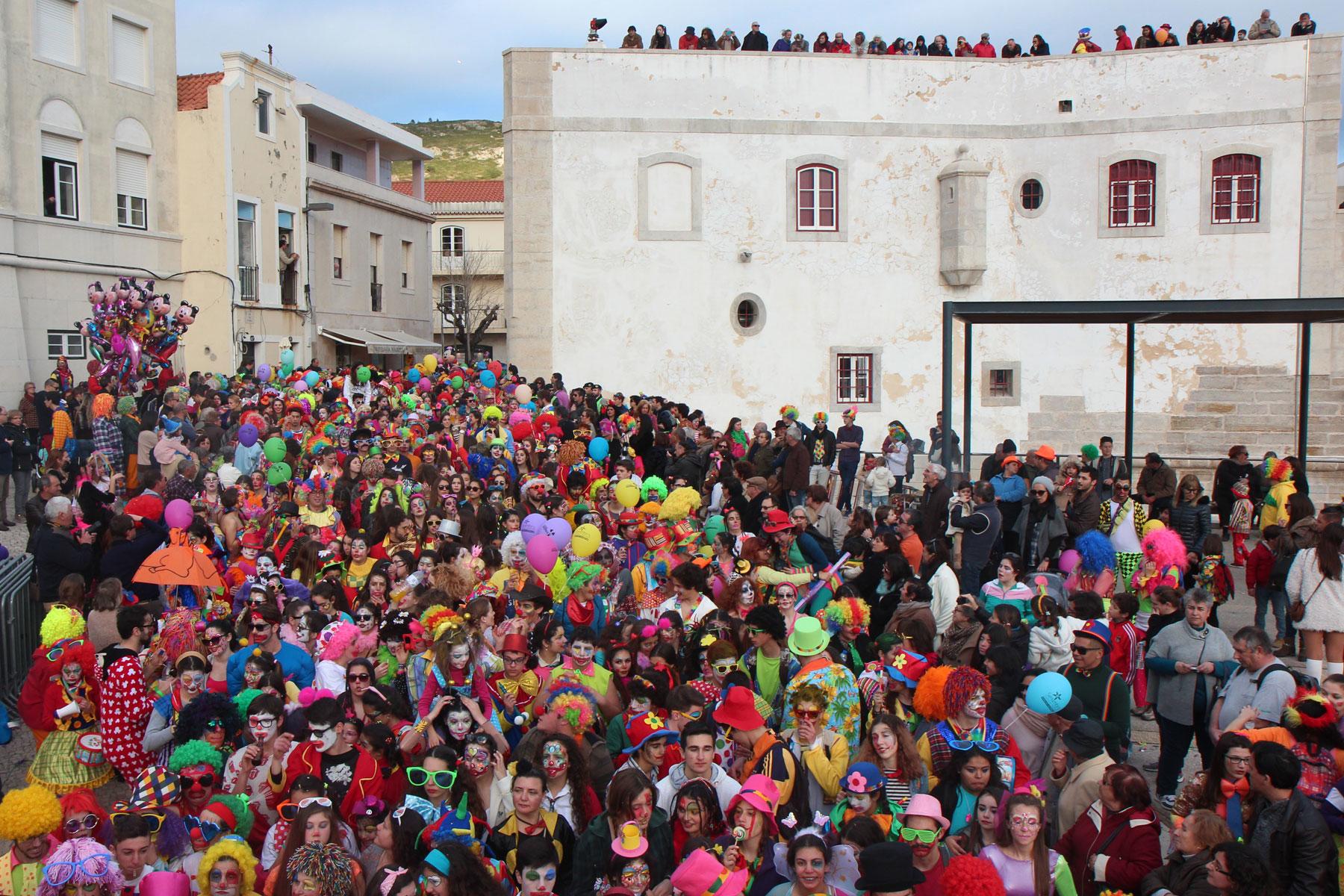 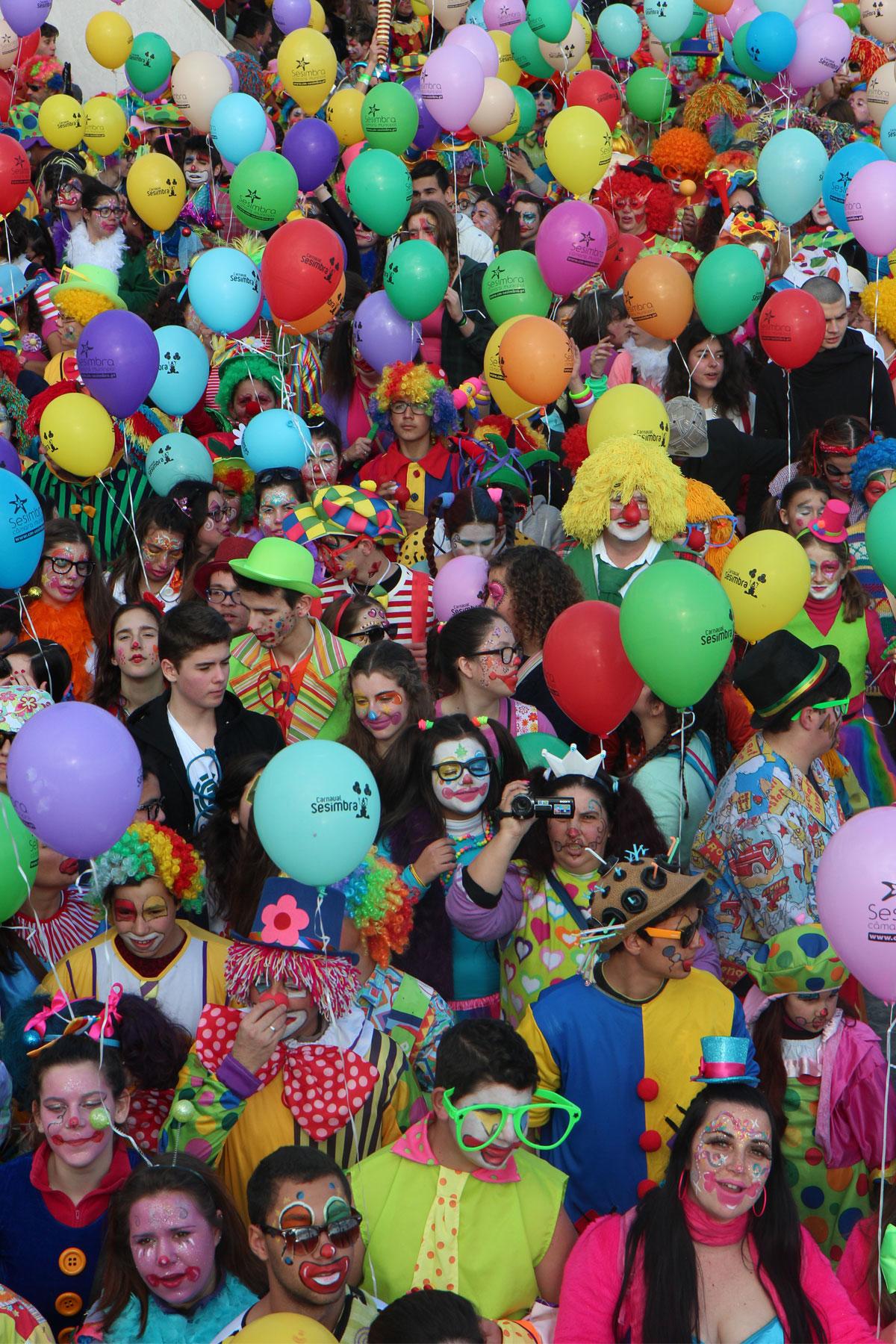 The clown fever sets in long before the pre-lenten festivities themselves—with awards for the best costumes, local schools embark on clown-themed dress-up activities, and workshops across the town teach locals of every age group how to apply their clown makeup with skillful precision. 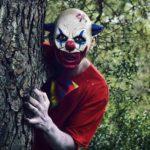 The result is truly a sight to behold, as clowns in their thousands congregate at key vantage points such as the town’s old fort, and anybody dressed in a non-clown like fashion is going to be very much an odd one out (even the dogs are in costume). Parading through the town clutching colorful balloons, banging drums, and tapping tambourines, the event turns the historic center of Sesimbra into a riot of color and sound. The fishing boats that bob on the harbor are draped in multi-colored flags, while clown cars and tricycles beep and honk their way through the crowds. 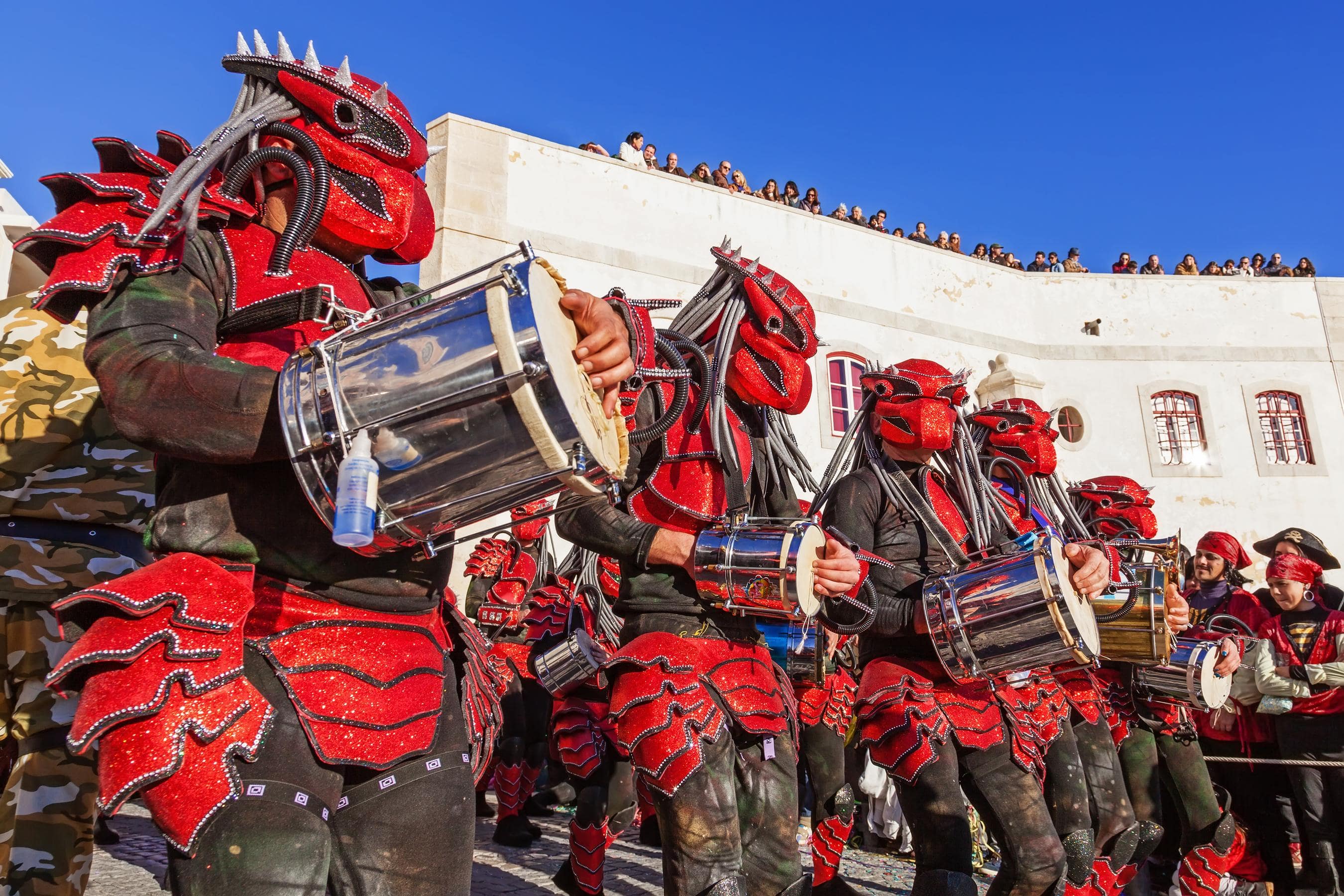 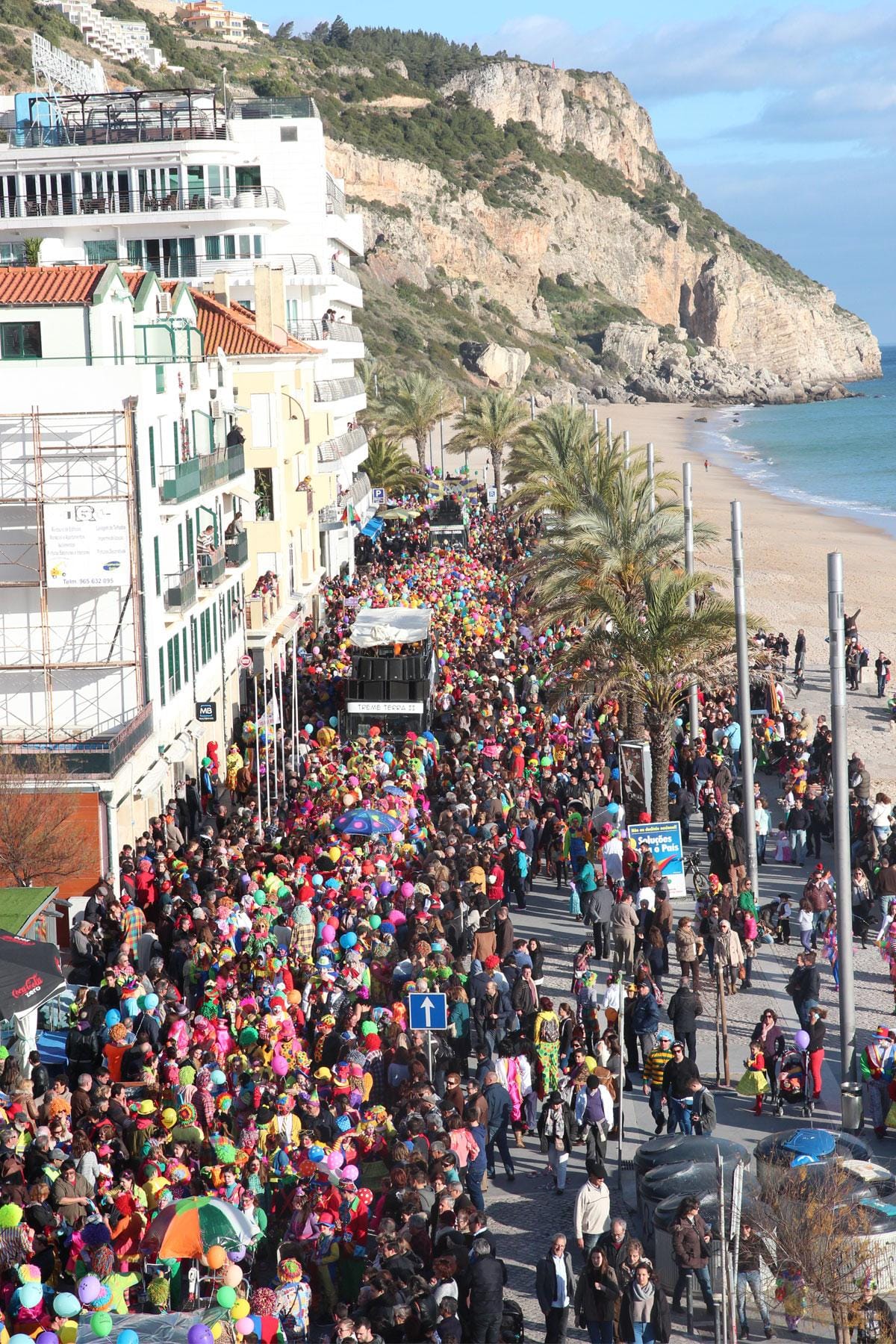 Sesimbra’s clown parade is just one unusual aspect of the town’s carnival festivities, which run for the three days leading up to Ash Wednesday. Influenced by the world-famous Carnival celebrations of the former Portuguese colony Brazil, Sesimbra’s festivities are some of the liveliest in the country, notable for the samba schools that spend much of the year perfecting drum-led anthems and dance routines to be performed as they parade through Sesimbra during the week of Carnival. The fun begins shortly after reveillon (New Year’s) when the surprisingly numerous local samba schools hold Sunday rehearsals along the beachfront. 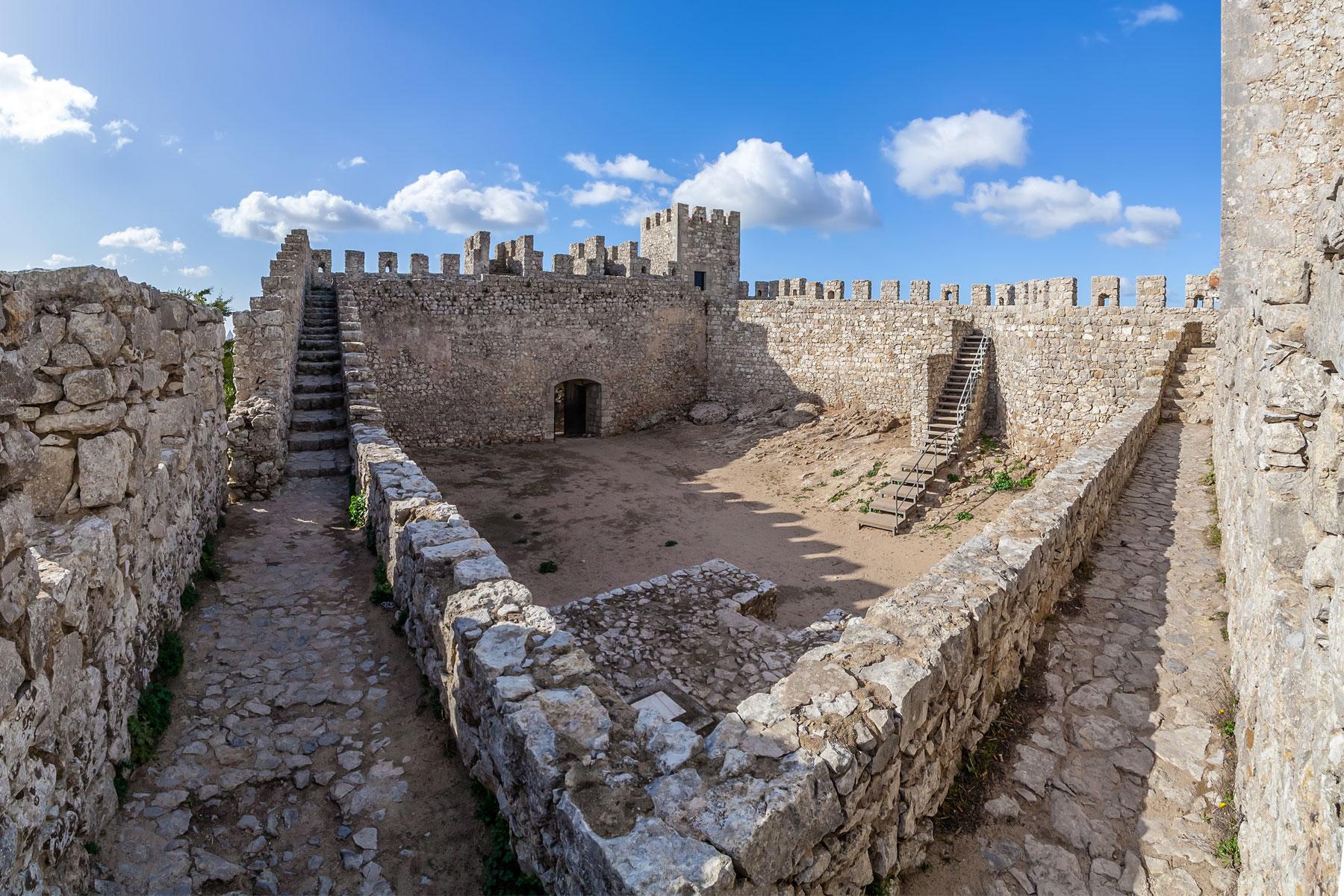 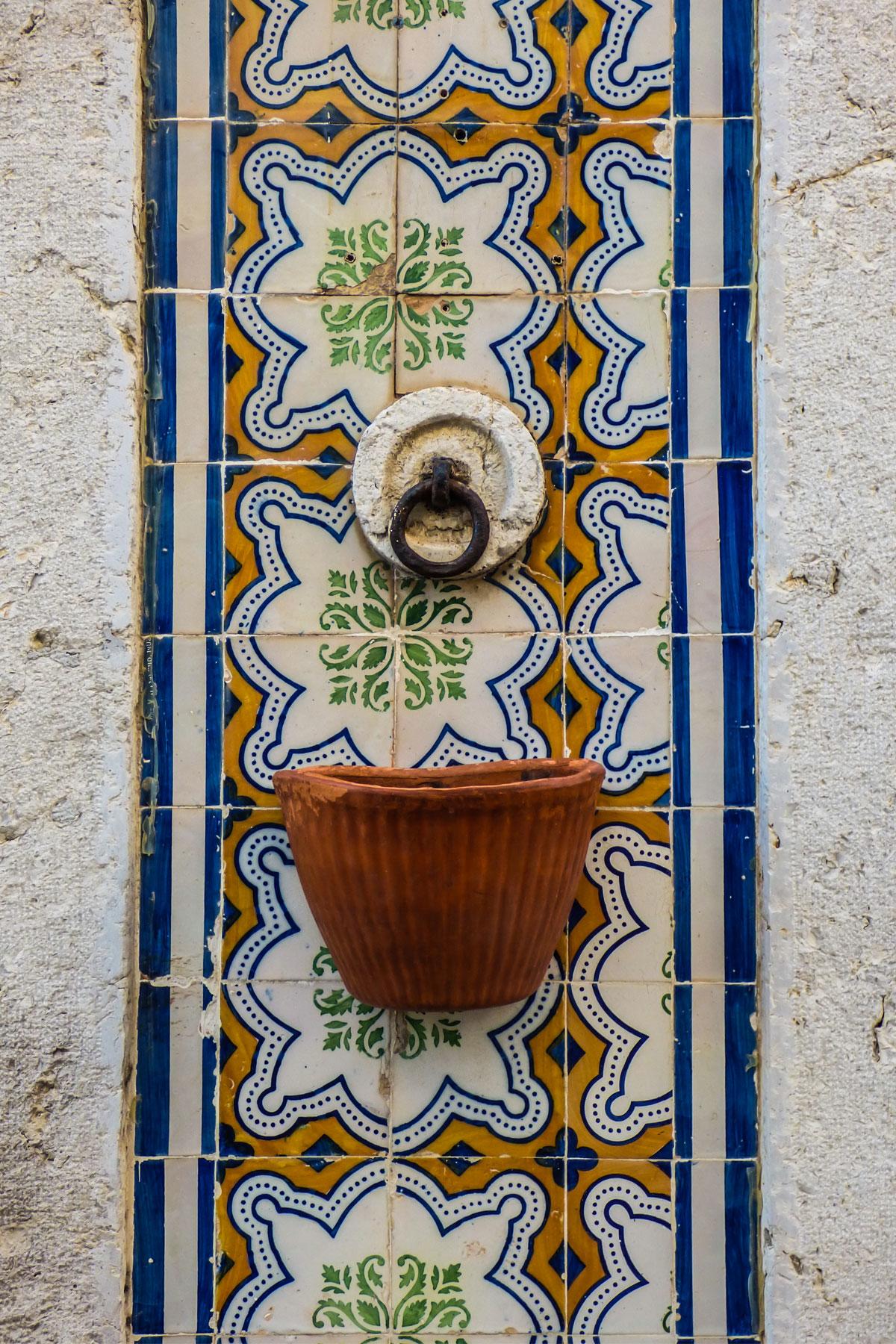 There’s one notable difference between Rio Carnival and its Sesimbrense equivalent though—while Carnival in Brazil takes place in the heat of tropical summer, the Portuguese version takes place in the less-than-tropical heat of Portuguese winter, which means the scantily-clad samba dancers have to shake their booties extra-enthusiastically to keep the chill at bay. In recent years, the samba schools have started hosting “summer Carnival” events in August when the scorching summer weather is better suited to the skimpy, sparkly samba costumes that are part and parcel of the samba parade experience. Hordes of Lisbon locals cross the River Tagus to make the 35 km journey south to Sesimbra, sipping the local pescador liqueur and gorging on super-fresh swordfish (a local specialty and the symbol of the town). 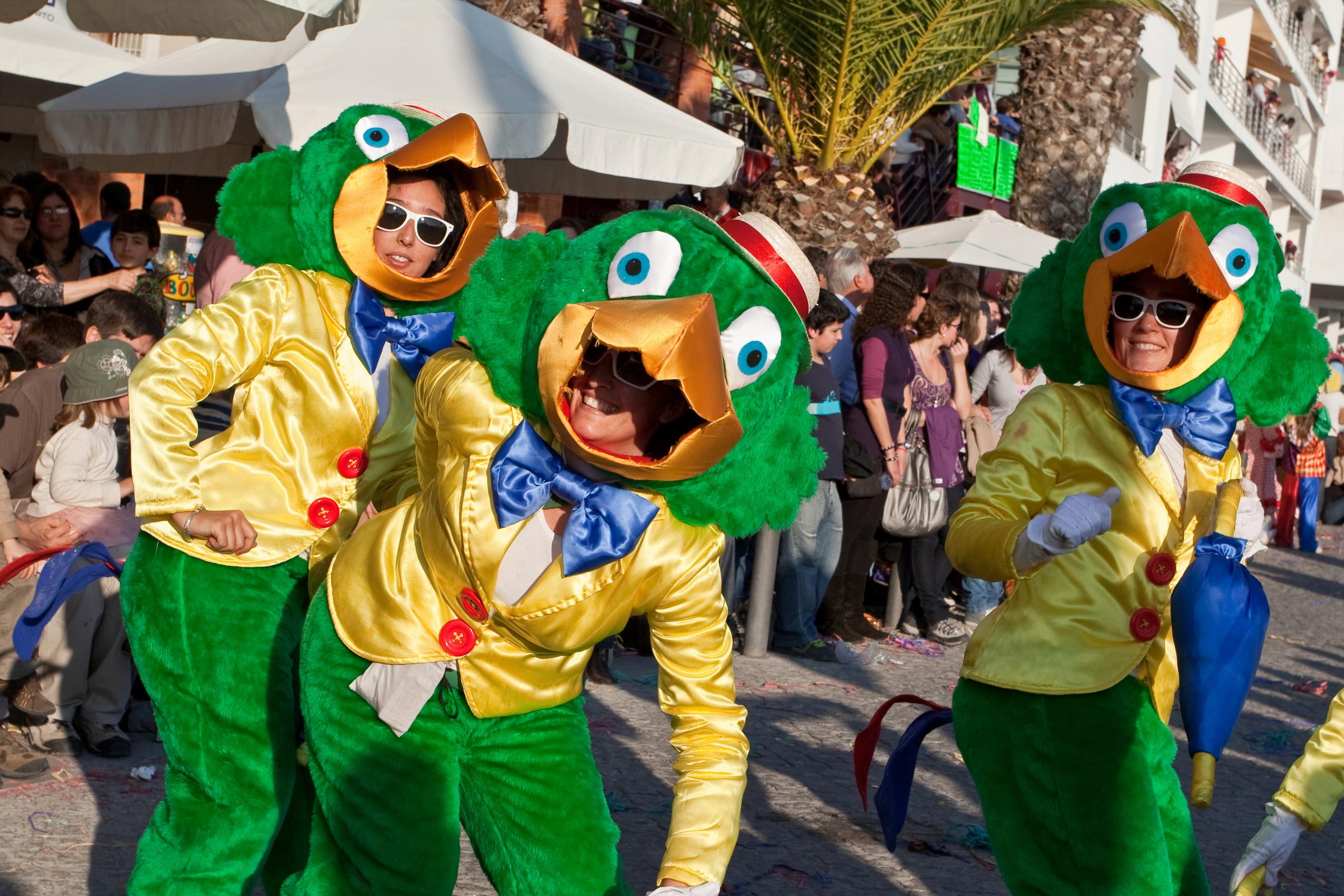 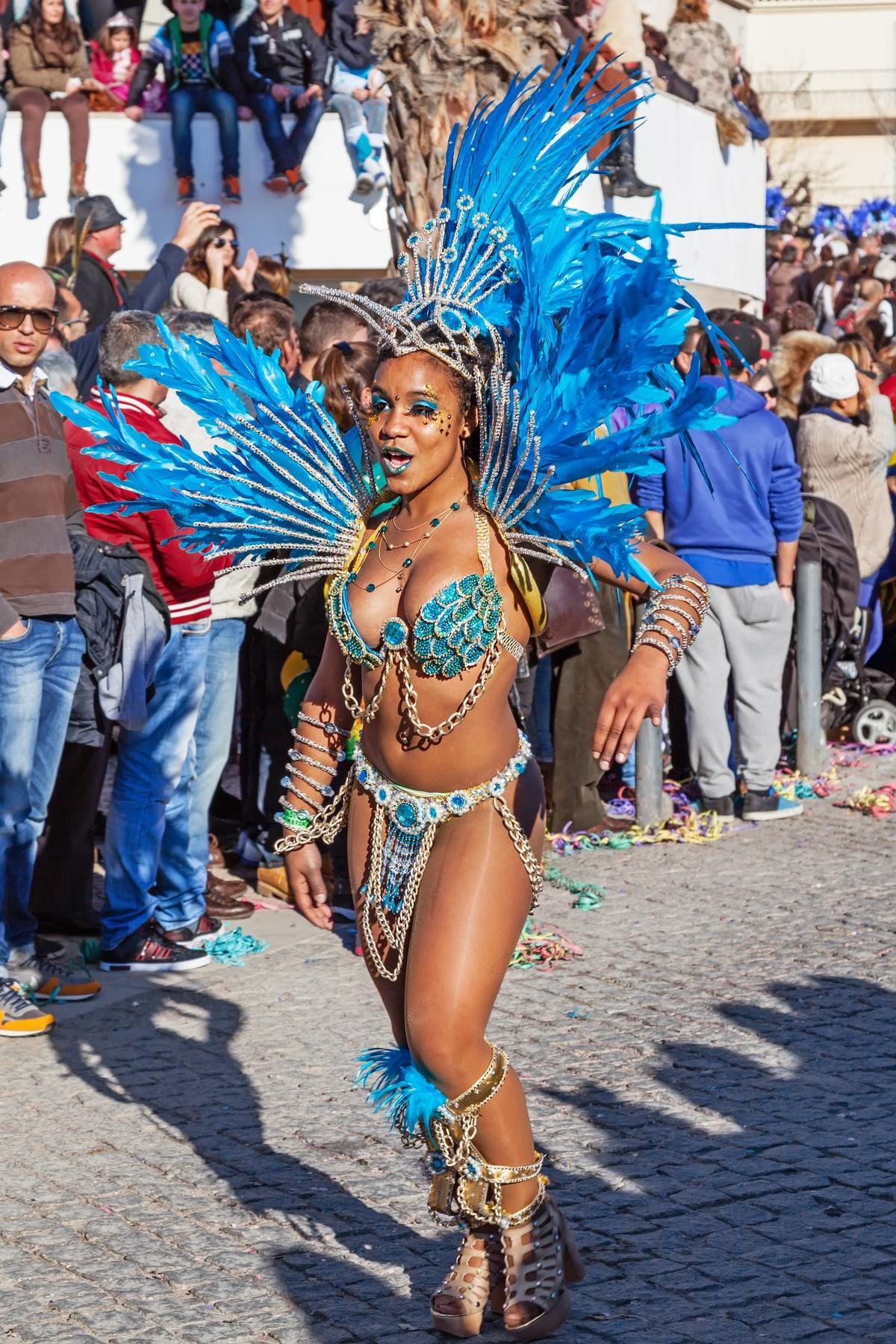 But locals in this usually-quiet spot haven’t forgotten Portuguese traditions among all the shimmying samba dancers and colorful clowns. Visitors can also catch traditional street theater performances and religious parades, as well as Cavalhadas— good-humored reenactments of horseback battles between Moors and Christians. And in this fishing-focused community, what better way to bring the festivities to a close than with a “codfish funeral”? Yes, on the night of Ash Wednesday, the Enterro do Bacalhau sees local thespians enact a scene in which the famous Portuguese fish is symbolically buried, having first been put on trial and judged by key members of the local community.

Curious visitors willing to brave the hordes of clowns can catch Sesimbra’s 2018 festivities from February 8-13, but be sure to book accommodations well in advance, as the small town is chock full with revelers during its most famous holiday.