Disney’s first entry into the cruise-ship business began when the Disney Magic was launched in 1998. The ship, whose design harkens back to a more gracious period in cruising, is about to enter dry-dock in September for her first major renovation since her launch 15 years ago. Disney “Imagineer” Joe Lanzisero met with groups of journalists to give us a preview of what to expect when she emerges later this fall. 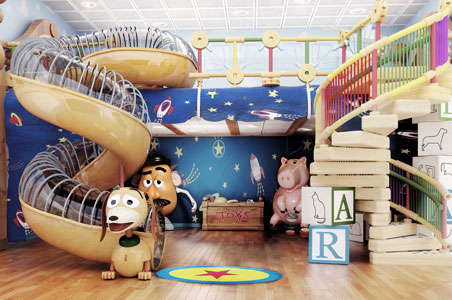 New to the line (and for the moment unique to this ship) will be the Marvel Avengers Academy, a part of the revitalized Disney’s Oceaneer Club. The space will offer hands-on workshops as well as a few items that may make some parents jealous: a life-size Iron Man suit, Captain America’s shield, and Thor’s hammer, all on display in the area. But that’s not the only change coming to the kids club. Younger kids will be able to play in Andy’s Room (from Toy Story); princesses-to-be will be able to dress up in Pixie Hollow; and a new Mickey Mouse Club area will be introduced to coincide with the introduction of new Mickey Mouse cartoons that are coming to theaters near you. 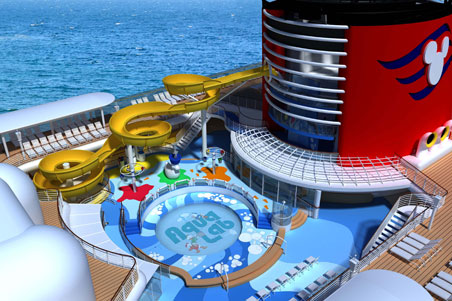 Up on deck, one of the more popular additions is likely to be a new AquaDunk thrill slide, which will have a countdown followed by a 30-foot plunge followed by trip out and over the side of the ship. The AquaLab water playground and the Nephews Splash Zone will also be added to Disney Magic.

Adults aren’t left out of the additions. The entire nightlife area of the ship is being redesigned, and several new bars and clubs are being added, including Keys (a piano bar), Fathoms (a nightclub with live music and dancing), and O’Gills (an Irish pub). The Senses Spa & Salon and Palo restaurant are also getting major facelifts. 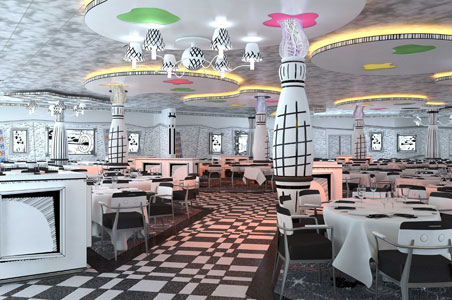 Needless to say the cabins are also being redecorated and storage added, and the most expensive suites are getting a complete makeover. And the Animator’s Palate restaurant will get the same splashy “Drawn to Magic” and “Animation Magic” shows that are found on Disney’s newest ship, Disney Fantasy.

In all, the line is aiming to brighten and freshen up the ship with more contemporary designs that reinforce nautical motifs. When it emerges on October 10, almost every aspect will have been touched in some way—even the buffet, which is being redecorated and redesigned to focus more on action cooking stations.