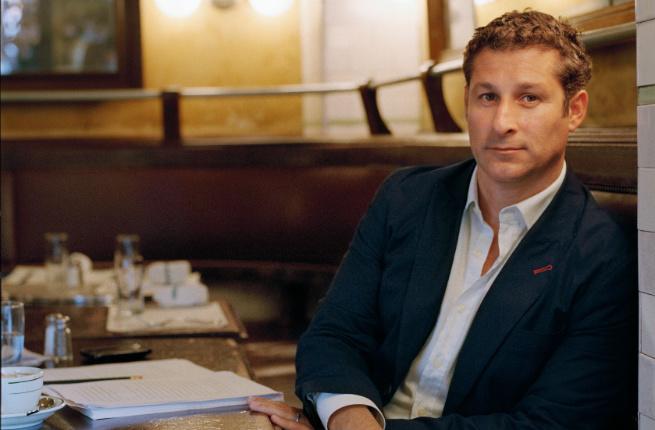 The Travelers’ hero, Will Rhodes, is a travel writer turned accidental spy. Our founder, Eugene Fodor, also used travel writing as a front while working for the CIA. Naturally, we’re hooked. What was your inspiration?

I’ve had dozens of jobs—I’ve always been a huge fan of quitting—for many different types of employer: federal and local government, small and midsize businesses, international conglomerates, publicly traded and privately owned. One was an advertising agency that specialized in international campaigns, a workplace where everyone was from somewhere else, and they all seemed to speak a half-dozen languages and smoke multiple cigarettes at once, and they were constantly jetting off to other continents to hand-hold clients. Or at least that’s what they told me. It occurred to me that they might be doing something completely different—I might be doing something completely different, and not know it. How certain are any of us of whom we really work for? And what the true agenda is? How do we really know, for certain?

How would you describe The Travelers, the New York-based travel magazine where most of the characters work?

The office is a mash-up between places that declined to make me job offers—Condé Nast in the Madison Avenue building, and Food & Wine on Sixth Avenue, and The New Yorker in the great old offices on 43rd Street (I interviewed for a lot of jobs)—and a place where I did get a job: the old Random House headquarters, in a decaying midcentury building that I somehow found charming. But the business itself is meant to feel general, like any other outfit in a contracting industry, facing a variety of threats from without—merger or buyout or layoffs or shutdown, the inexorable march of capitalist progress, the sorts of things that nearly all of us end up worrying about.

Travel media folks will relish the insider industry details. You even describe a press dinner and its personalities. What or who was your source for the terrific behind-the-scenes commentary?

I’m my source! I had editorial jobs for nearly two decades, and my longest stint was as a cookbook editor at Clarkson Potter, which was then (and still is now) a prestigious imprint for any food author, or in fact anyone writing any sort of lifestyle book. I attended plenty of events whose purpose was to seduce media into favorable coverage (or into cookbook deals). I think the most decadent of these was at Thomas Keller’s Per Se, though for the life of me I can’t remember who was trying to sell what to whom (perhaps that speaks to the efficacy of these sorts of events). I was surrounded by magazine people, and we all had a lot to drink along with the exceptional food, and besides coat-check tips no one spent a cent for this spectacular meal at one of the most revered restaurants in the world.

The book’s characters travel to dozens of countries from Argentina to Spain, but Iceland gets the most ink. What about Iceland made it such an ideal setting for major plot twists?

A few years ago, my family took a two-week holiday to Iceland, and I was absolutely blown away by its dramatic, forbidding beauty. Everything about Iceland seemed redolent of nature’s awesome power—thundering waterfalls and exploding geysers and active volcanoes and plate-tectonic earthquakes, cliffs and glaciers and whales—and the futility of man’s elemental struggle to survive. It also struck me as terribly lonesome, the sort of place you’d go if you really wanted to disappear. For one of the characters in this novel, that’s really important.

You devote several enjoyable paragraphs to Will’s expert packing routine. You also travel a lot yourself. Are you similarly well-organized? What always has a place in your carry-on?

“Well-organized” is a polite phrase for what I am, and Will’s punctilious organization is the least fictional passage in the book. What do I always bring? A backup novel. As a book editor, one of my survival mechanisms was the ability to stop reading a manuscript when I stopped getting something out of it. Plot still unresolved? Big twists still in the future? Fine with me. I’m not going to devote another 3 hours to something that’s not helping me grow as a reader, a writer, or a human being. Whenever that realization dawns, I want to be able to give up the old, and start something new. Nobody is handing out any prizes for number of books finished, or at least not any prize that I want.

Interestingly, Will “always—100 per cent of the time—takes the audio tour” at local sights. What audio-tours, if any, would he recommend to Fodor’s travelers?

Any museum’s. They’re not expensive, and almost never disappointing. And on the rare occasion when they do prove tiresome? I simply stop listening, and I’m none the worse. But when an audio tour is good, I think it pulls me much more intimately into the culture.

Your books always take readers to foreign locales. Any idea where we’ll go to next?

I’m planning for my next novel to take place largely in Mexico and Guatemala. Not the Mexico of Cancun and Tulum, Puerto Vallarta and Acapulco, but in places where American tourists are few and far between. Because although these characters will look like tourists, something else will be going on.

Finally, you clearly love to travel, yourself. What’s on your personal bucket list?

New Zealand, South Africa, Morocco, Tokyo. You know, the convenient places from New York! When my twin boys were five, one of them fell from a large dangerous climbing apparatus in Luxembourg, and broke his arm. When the cast finally came off, I asked him what he’d learned from the experience. “Breaking your arm,” he told me, “doesn’t hurt that much.” Similarly, I recently sat in coach for an ungodly long flight from New York to Hong Kong, and it wasn’t nearly as bad as I’d expected. I’m willing to break that particular arm again.

Chris Pavone is the New York Times bestselling author of The Travelers, The Expats and The Accident. He is the winner of the Edgar and Anthony awards for best first novel. He was a book editor for nearly two decades and lives in New York City with his family.