Arts & Culture Kristin Vuković The 5 Most Insane Stories From the Museum of Hangovers
PHOTO: Ice Castles

These artists help visitors live out their "Frozen" fantasies at these four incredible ice castles.

For Keith Heintzelman and Anna Closser, a normal day at work might include Googling, “How to make a cannon out of ice.”

The duo work for Ice Castles, a Utah-based company that, for 11 years, has created wondrous frozen fortresses across the United States. Their job each season is to erect a 20-million-pound citadel entirely out of individual icicles in a way that’s both fantastical and safe for the myriad of visitors that will selfie their way through the frosty palace each season.

Though Keintzelman’s and Closser’s official titles are site managers at the Dillon, Colorado Ice Castle, you could call them artists or architects or even icicle farmers.

“The ice lends itself to grandeur. We just have to sculpt it and shape it in such a way that it is safe for people.”

“We grow our own ice here,” Closser explained. “They’re similar to the icicles that grow off your roof. We grow them and harvest them and strategically place them.”

Starting with an empty baseball field and some water lines, the pair and their team of 40 set to work creating icicles (some in molds, some naturally), ranging from the size of your thumb to the size of your calf, which they will pick and strategically place until the structure resembles the blueprint sketched in the off-season. It’s a process that takes two or more months straight of 10-hour workdays. But for Heintzelman, it’s worth it because, “Thousands of icicles later, you have a beautiful, awe-inspiring masterpiece.”

Thousands of icicles may be a bit of an understatement. According to the company, each site makes over 12,000 new icicles each day so they may continue to build structures up and out. Usually, at its apex, the castles are more than 50 feet tall.

Heintzelman explained that the hand-placed icicles are intended to create a structure that looks like a natural phenomenon, like the ice caves at Wisconsin’s Apostle Islands, rather than something man-made. 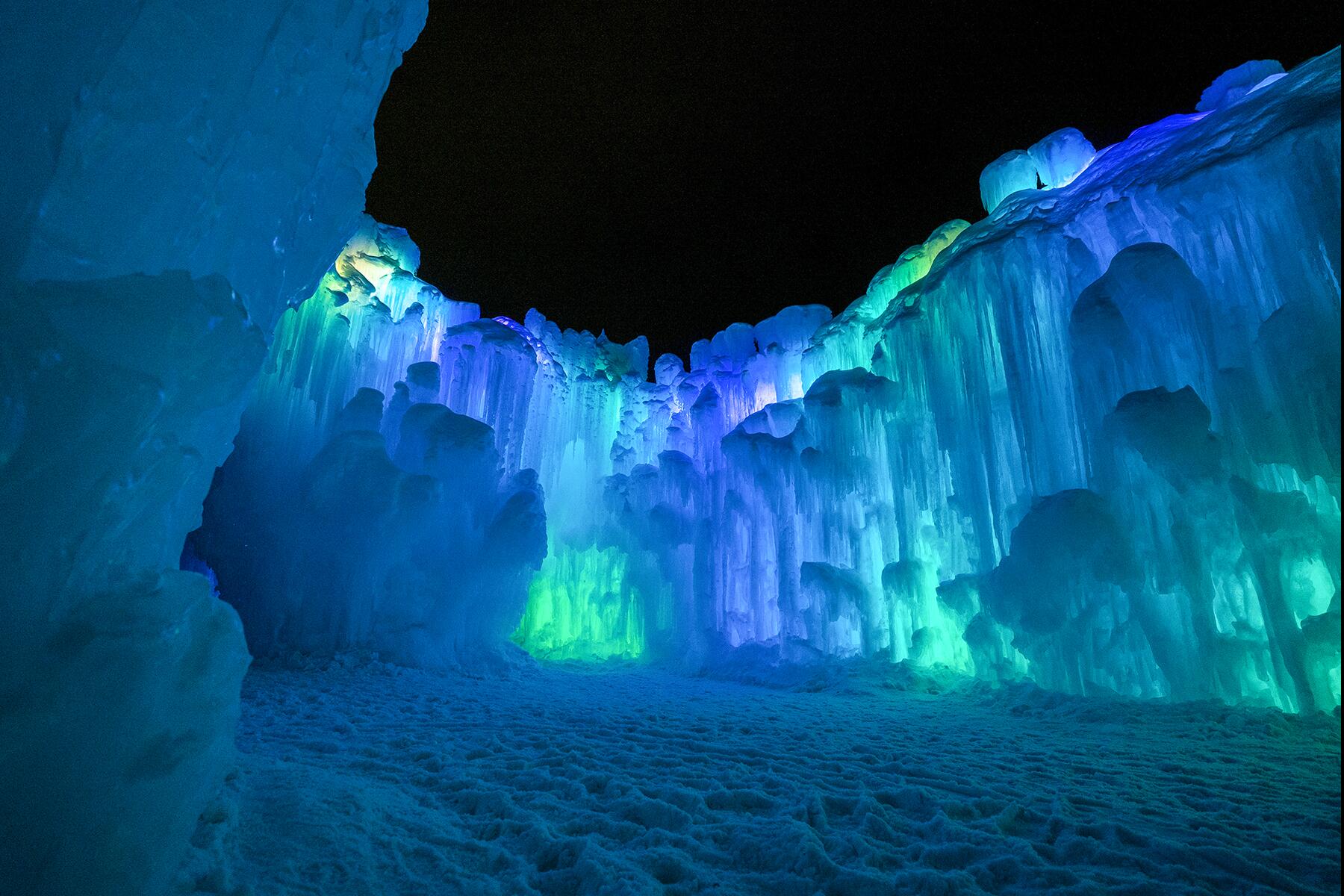 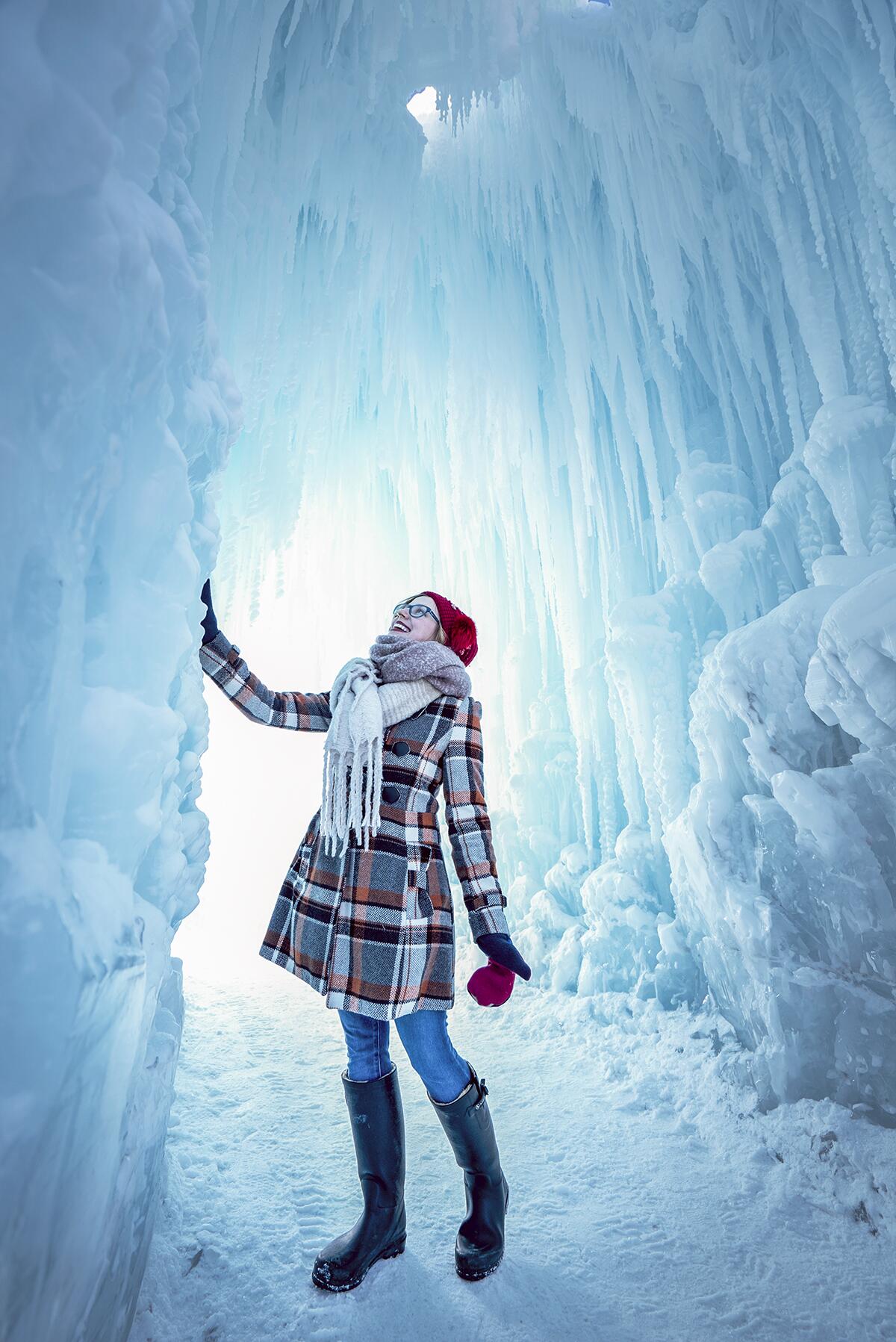 “The ice lends itself to grandeur,” Heintzelman said. “We just have to sculpt it and shape it in such a way that it is safe for people.”

A big part of their job is reading the ice, determining what areas may become hazardous, and either running water over thin parts or entirely remaking zones that aren’t sound enough. However, because the ice is bonded to ice, Closser said, it is more stable than ice formed on other surfaces, like metal. At any given point, you’re walking on six feet of ice.

“Here it melts from the bottom, up,” Closser said. “It’s not going to just randomly break and fall on you. It takes massive excavators to come knock this down in the spring—it’s not going anywhere.”

“I always say the Ice Castle is almost like a living structure because it’s constantly changing and moving and we’re constantly updating it.”

While they plan out how each castle is going to look months in advance, structural and environmental changes mean that by the end of the season, it often looks significantly different than it did on opening day. As they go along, they may add features that weren’t planned due to ice growing faster in some areas or not swelling as much in other spots. This year, the Colorado castle site has flying buttress-style arches (similar to what you might see on European cathedrals) that weren’t planned originally, but as the ice started growing upward, it formed that way on its own.

“I always say the Ice Castle is almost like a living structure because it’s constantly changing and moving and we’re constantly updating it,” Closser said. Throughout the winter, different elements affect how the castle looks, including snowmelt, wind patterns, and, specifically at the Colorado site, how the sun affects the ice at 10,000 feet of elevation.

In normal seasons, the castle has operated as a choose-your-own, free-for-all adventure, but this year, due to coronavirus, organizers had to be much more mindful about how attendees would interact with the frozen complexes. They opted to craft a castle with a single distinct path for visitors to follow and have implemented timed entry requiring people to buy tickets for a specific time online beforehand.

Tickets are on sales now for all four locations—they’ll likely be open until mid-March for visitors to practice their Elsa (or Olaf) impersonations.