12 Books to Read on Your Summer Vacation 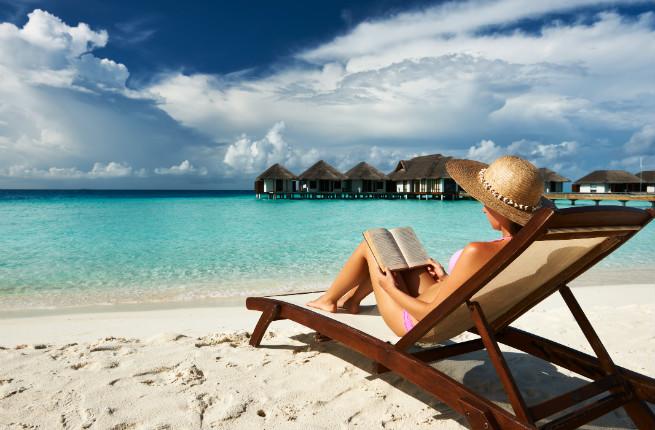 Summer is a time for rest and relaxation, which makes it an ideal season for reading. Whether you’re lounging on the beach, taking trains across Europe, or jetting off to far-flung destinations on long-haul flights, now is the perfect time to enjoy a good book. Fortunately, the publishing industry doesn’t slow down in the summer months, so there are plenty of new titles to enjoy. We’ve handpicked twelve of our favorite new releases, all of which deserve a spot in your weekenders and carry-ons.

1. Kitchens of the Great Midwest by J. Ryan Stradal

One of this summer’s most hotly anticipated titles, this novel tells the story of a life-long foodie (and Minnesota native) who becomes the star chef behind the country’s most coveted reservation, a legendary yet secretive pop-up restaurant. Inventively structured, each chapter of the book focuses on a single dish and character, all the while crafting a portrait of Midwestern culture, delicious heirloom ingredients, and foodie culture itself. Stradal is an active player in the West Coast literary scene, and his writing has appeared in many publications, but this is his first novel. (Release date: July 28)

2. The Sunlit Night by Rebecca Dinerstein

Author Rebecca Dinerstein spent some time living in the land of perpetual sunlight and then went ahead and wrote a book about it. Her debut novel, populated with quirky characters, bizarre occurrences, and picturesque landscapes, follows two young lovers whose paths cross unexpectedly in Lofoten, a Norwegian archipelago of six tiny islands located 95 miles north of the Arctic Circle. Hailing from different backgrounds—Frances is escaping heartbreak and the hustle and bustle of Manhattan, Yasha is a Russian immigrant raised in Brooklyn’s Brighton Beach neighborhood who is in Norway to bury his father—the two form the kind of special bond that can only be found far away from home. (Released June 2)

Acclaimed writer Jami Attenberg, author of The Middlesteins, trades the suburbs of Chicago for Jazz Age New York City in her latest release, a winning historical novel based on the real-life “Queen of the Bowery,” Mazie Phillips. Told from multiple perspectives, including Mazie via her diary entries, the book spins the tale of a bawdy proprietress of a downtown movie house who becomes a saint of the streets during the Great Depression, opening her theater to the needy. Mirroring real life, the final act of the book concerns Mazie’s rediscovery by a documentarian seeking a good story. (Released June 2)

4. In the Country: Stories by Mia Alvar

If your summer attention span is too short for a full novel, but you don’t want something frothy, consider this collection from newcomer Mia Alvar. Using the complicated history of the Philippines during the ’70s and ’80s as a starting point, her stories collectively paint an imagined portrait of the Filipino diaspora. Though culturally specific, the nine globe-trotting stories explore the universal experience of loss, disconnection, and alienation, told by a compassionate writer. (Released June 16)

5. The Star Side of Bird Hill: A Novel by Naomi Jackson

Another debut novel to consider is this coming-of-age tale, set in 1989, about two sisters who are suddenly relocated from Brooklyn to Barbados to live with their grandmother. While one sister chases love, the other explores her family’s ancestral home and investigates her mother’s mysterious life, though both face a crisis when their estranged father appears to reclaim them and they must make a decision about their futures. Poetic and powerful, this tautly paced story is satisfyingly complex, and one you won’t soon forget. (Released June 30)

6. Go Set a Watchman: A Novel by Harper Lee

The most talked-about book of the summer, if not the year, is this surprise (and surprising) sequel to To Kill a Mockingbird. Set two decades after the action of the first book, the story follows Scout’s return home from New York City to visit her aging father, Atticus, who turns out not to be moral hero he was cast as in Mockingbird. Given that Watchman was Lee’s first novel, and was the source material used to write Mockingbird, Watchman’s true value may be that it allows the reader to witness the evolution of one of America’s most celebrated writers. (Released July 14)

7. Circling the Sun: A Novel by Paula McLain

The bestselling author of the Paris Wife returns with another historical novel, this one transporting readers to colonial Kenya in the 1920s. Based on a true story, the book centers on Beryl Markham, the first female pilot to fly across the Atlantic from east to west—though that’s barely mentioned in these pages. Instead, this is a look at the younger years of the headstrong daughter of a British colonial who grows up to be a horse trainer and later falls into a love triangle with Denys Finch Hatton and Karen Blixen, who would later pen the memoir Out of Africa under the name Isak Dinesen. Engrossing and expansive, this is a story populated with expats and high society, motorcycles and airplanes, and exotic landscapes and people. (Release date: July 28)

8. My Paris Dream: An Education in Style, Slang, and Seduction in the Great City on the Seine by Kate Betts

With so many French women writing books about how they eat, dress, and live these days, it’s refreshing to now have a memoir from an American writer about what she learned from her time in France. After graduating college, Betts decamped for Paris determined to become a local insider; amazingly, she managed to pull it off, landing a gig at Women’s Wear Daily and becoming a trusted member of fashion publisher John Fairchild’s inner circle. As much as it’s an account of larger-than-life personalities like Yves Saint Laurent, Karl Lagerfeld, Helmut Lang, and others in the 1980s, this is equally a coming-of-age memoir about a young woman finding herself and falling in love in one of the world’s greatest cities. (Released May 12)

9. England and Other Stories by Graham Swift

From the Booker Prize–winning author ofLast Orders and Wish You Were Here comes this collection of bite-sized observation, Swift’s first new book of short fiction in almost 30 years. A perfect read for Anglophiles, these stories capture the historical and contemporary complexities of a nation, and the experiences that make up quotidian life in England’s cities and countryside. Not content to only focus on the present, Swift’s tales start in the seventeenth century and arrive in the present day. (Released May 19)

10. The Rocks: A Novel by Peter Nichols

What kind of catastrophe would have to occur to suddenly drive two honeymooners apart and prevent them from speaking for the next 60 years, despite living on the same island? That’s the question posed and ultimately answered in Nichols’ new novel, which combines mystery, saga, intrigue, two love stories, and idyllic Mediterranean scenery. There’s even a dash of Romeo and Juliet in this very unusual but very intriguing read. (Released May 26)

11. South on Highland: A Novel by Liana Maeby

Liana Maeby has contributed to publications such as Interview Magazine and the Village Voice, though she’s best known as a very funny person on Twitter—though her debut novel proves she has a knack for delivering humorous observations alongside gut-wrenching realism, often on the very same page. Based on her own life, the novel follows a young L.A. screenwriter who, on the cusp of success, falls into drug and alcohol addiction. Navigating the city’s underbelly, the question is whether she will continue down her dark path or escape addiction to become a writer who gains the acclaim she deserves. (Released July 14)

Fans of David Sedaris and David Rakoff, take note: Here’s another bracingly sharp, unbelievably funny voice for you to embrace. Charting the highlights and mostly lowlights of living in New York City, Oliver tackles dating, intimacy, subways, cocktail parties, Times Square, and so much more via sketches, vignettes, and diary entries. Yet another debut from a young writer to come out this summer, this is the only title on this list guaranteed to make you laugh out loud. (Released June 2)