As travel to Portugal and Iceland has skyrocketed, United Airlines is catching up with the trend.

Over the past few years, American travelers have completely fallen head over heels with two destinations—Portugal and Iceland. It makes sense, after all. Portugal is the perfect balance of mountains, beaches, vineyards, hip cities, and sleepy villages—plus, it’s an exceedingly wallet-friendly destination. Meanwhile, Iceland is a dream come true for anyone who wants to lose themselves in the natural world. We’re talking volcanoes, caves, glaciers, waterfalls, fjords, and—in the wintertime—the Northern Lights.

So, it was only a matter of time until United Airlines came calling—they’ve recently added direct flights from their hub in Newark to both countries. In fact, the flight to Porto is the only non-stop route from the U.S. We asked two of our editors—Jennifer DePrima and Chantel Delulio—to pack their bags, hustle over to Newark Airport, jump aboard United’s Polaris business-class, and experience the inaugural flights to Porto and Reykjavik, respectively.

Newark Airport, the Lounge, and the (Top-Secret) United Restaurant

Jennifer DePrima (Porto): United’s Porto-bound flights depart Newark-Liberty International Airport each evening at 9:45; if you’re one of those lucky souls who can fall asleep on planes (I’m not) or have a rainy-day Xanax tucked into your carry-on (I didn’t), the departure time maximizes the chance of getting a decent amount of shuteye on this relatively short transatlantic flight.

Like most New Yorkers, I cast a jaundiced eye on my city’s points of departure—complaining about the NYC-area airports is our unofficial sport, so I was already grumbling as I elbow-checked my way through the rush-hour crowds at Penn Station and sprinted to catch my train to New Jersey.

My attitude adjusted when I got to Terminal C, however; this part of the airport has undergone some major upgrades, and the amenities are now quite nice. I had the additional perk of admission into Classified, United’s invitation-only, speakeasy-style restaurant/lounge to relax before my flight. I don’t think I’m allowed to disclose exactly where it is, and details of how to score an invitation are a bit murky, but holding a Polaris-class ticket certainly helps. Once inside the small, stylish space, I was greeted by courteous servers and enjoyed a dinner that would rival many fine restaurants back across the river: aged steak, poached lobster, perfectly seared turbot, fresh salads, and an extensive wine list, rounded off with glasses of mellow 1985 port wine. 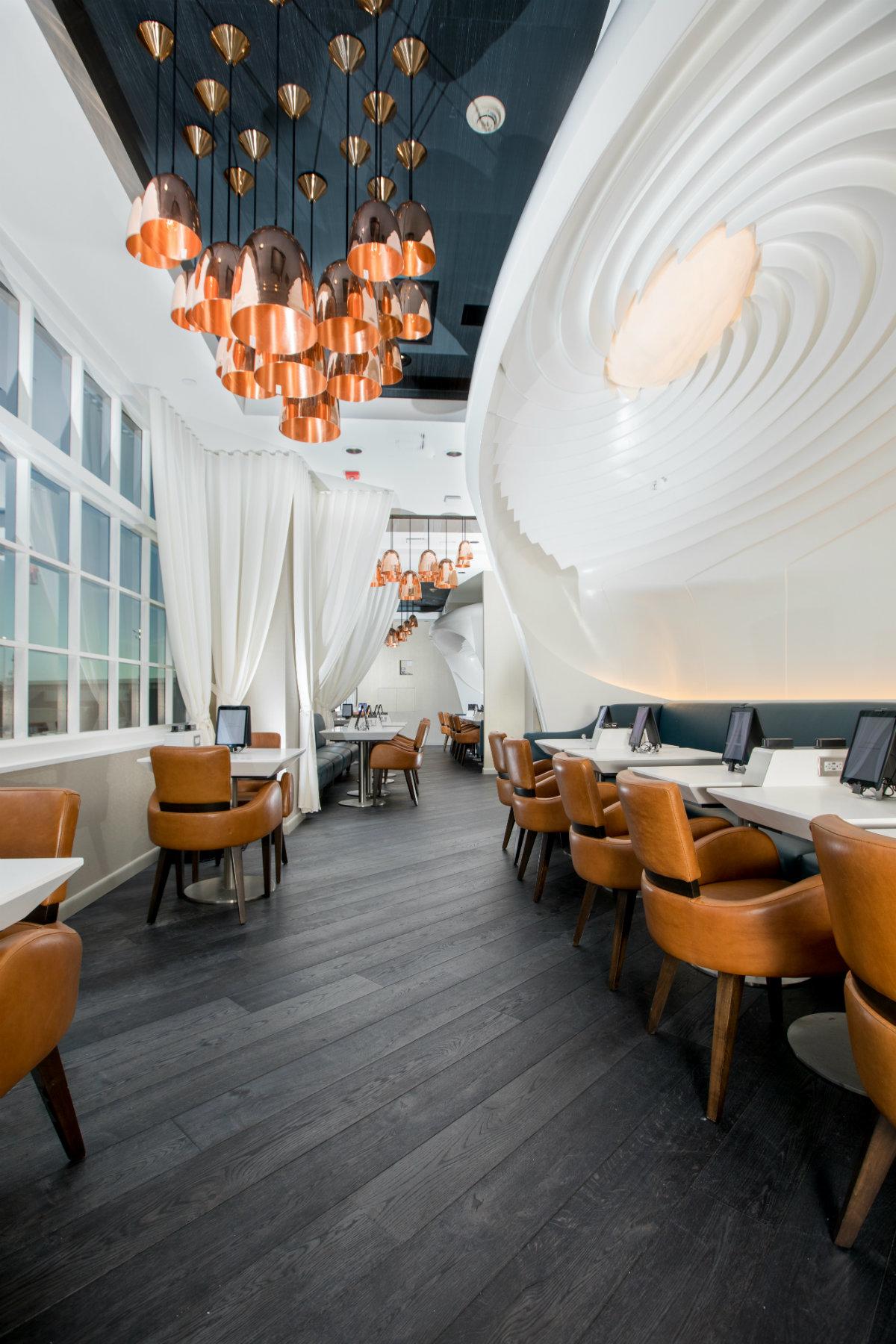 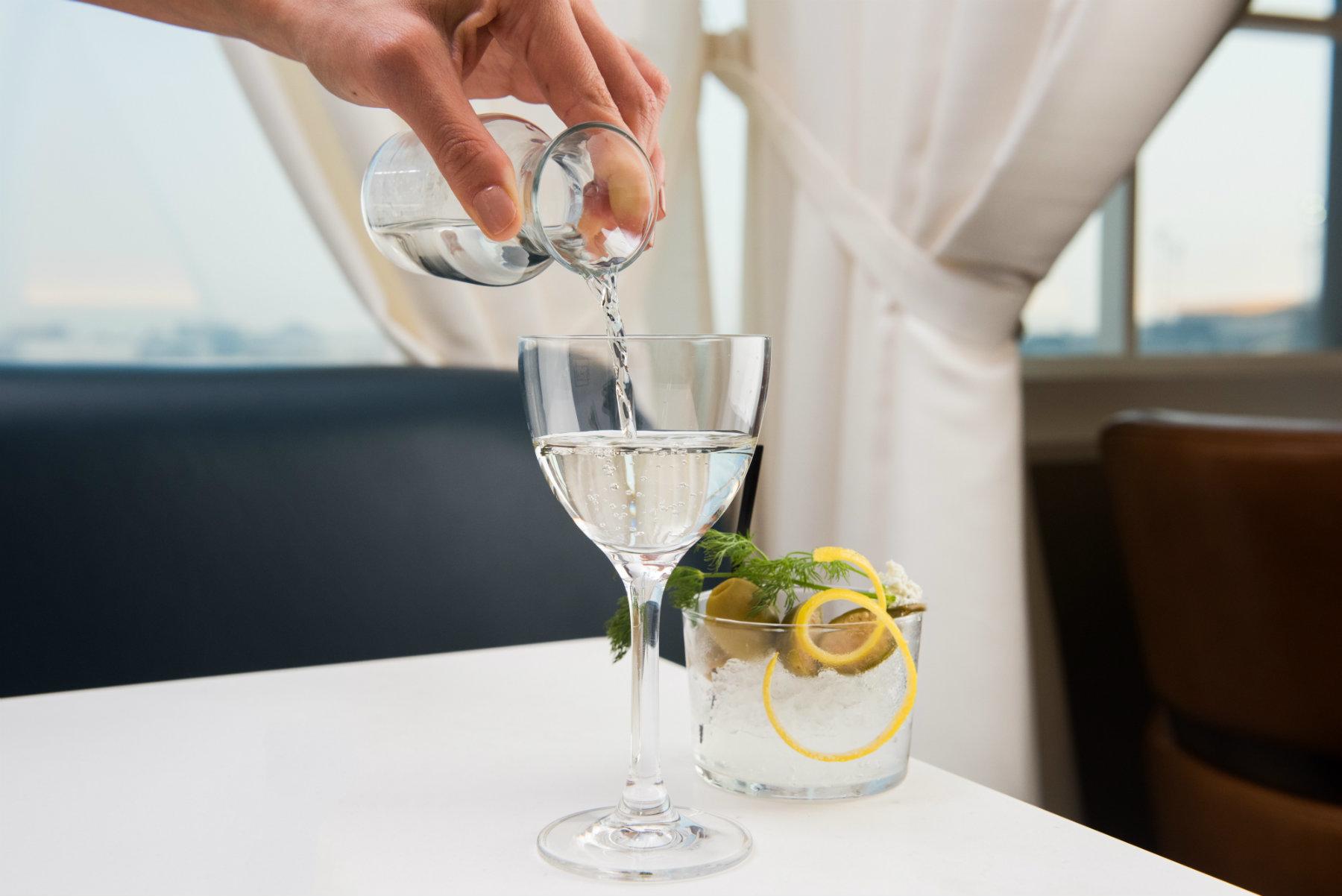 Chantel Delulio (Reykjavik): I arrived in Newark with plenty of time as I was set to dine at United’s invite-only restaurant, Classified. The only challenge was finding it. I hadn’t been expecting it to be named so literally but once a helpful bartender in one of the terminal’s middle-of-the-hallway bars set me on the right path (after I assured them that I had a reservation) I was whisked away behind the scenes of terminal C. It’s made clear that Classified dining is only by invitation but how one is deemed worthy of an invite is a lot less clear. There’s a website where you can enter your MileagePlus number and your last name to see if you’ll be approved for entry, but it’s very much a “Don’t call us, we’ll call you” situation.

Those who are lucky enough to be invited in will be ensconced in a world that feels far away from the sounds of blaring PA announcements and roller bags scraping across the floor. The only real reminder that you’re still in an airport is your plastic knife—even Classified has to abide by security rules. This dedication to transforming your airport experience, of course, extends to the food. The dinner menu has plenty of fine wines, appetizers, and entrees including the decadent Seafood Plateau (which is, blissfully, exactly what it sounds like). But the prettiest sight of all is the drink cart, which is outfitted with high-end liquor.

The Cabin and Seat 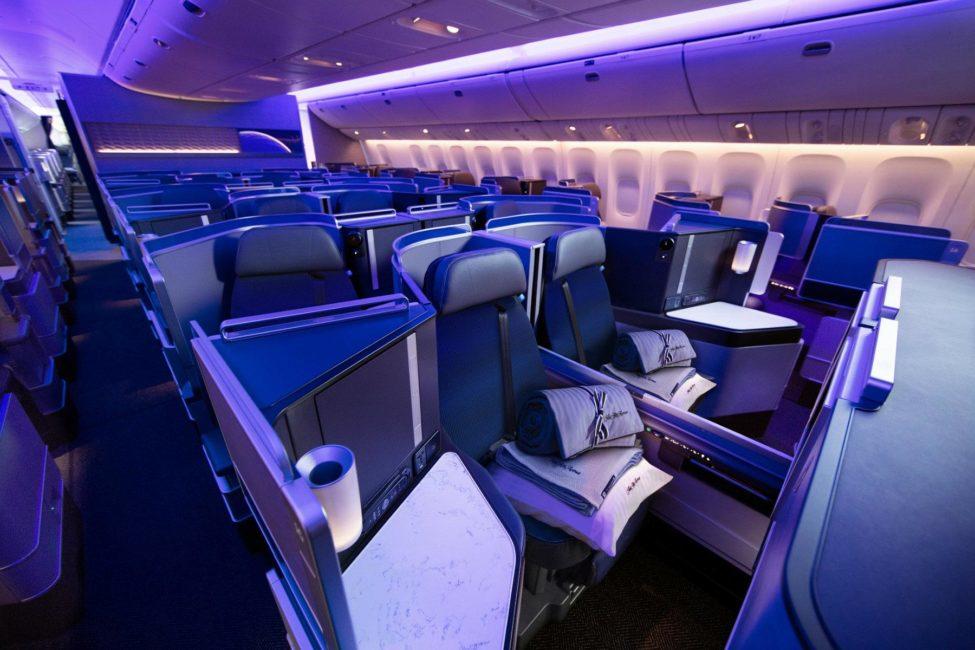 Porto: The eastbound flight only takes a little over six hours, so United doesn’t employ its largest jets for this route. The Polaris cabin is small, just four 2×2 rows, so it can feel a little cramped, but it’s packed with a full complement of business-class amenities. Most important, passengers enjoy a fully lie-flat seat with adjustable back support and high-thread-count linens from Saks Fifth Avenue (including what a flight attendant jokingly called the “maxi pad,” an additional topper to make your seat-bed even cozier). My major critique of the cabin would be the lavatory—it’s no larger or better-appointed than the ones in economy, and even with fewer people using it, there was some serious competition with other passengers (as well as the flight crew) to use it, especially at bedtime and first thing in the morning. 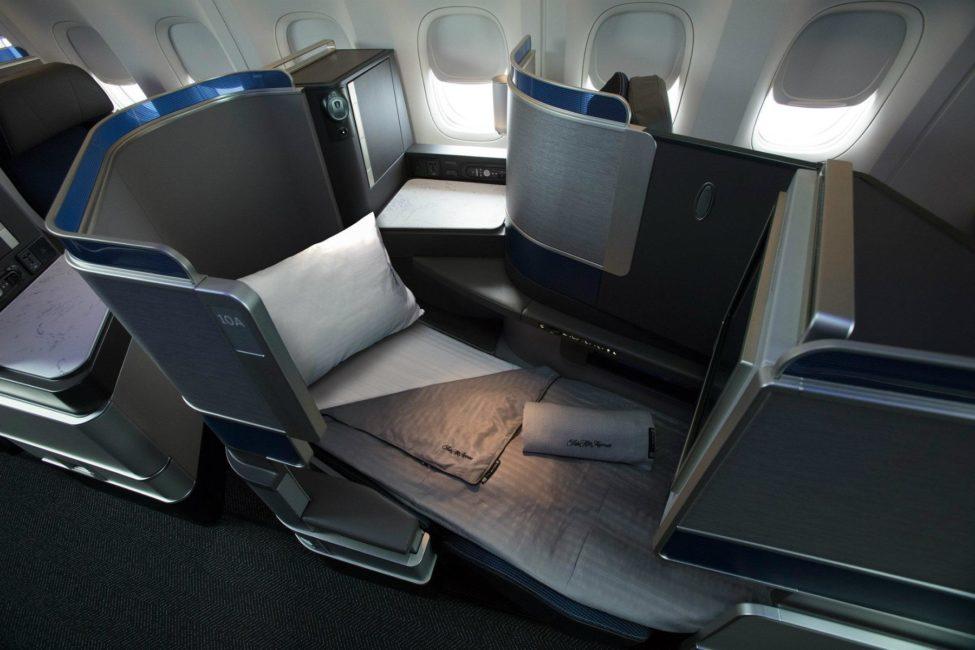 Reykjavik: The Polaris Business Class seats are exactly what you’d hope for on a five-hour overnight flight. Instead of a traditional seat, you have your own little pod complete with a neat little cubby over your shoulder. I don’t know why but there’s something thrilling about having a space that’s yours where you can put your stuff. The bedding includes a mattress cushion, a blanket, and a pillow that are all soft, generously sized, and designed by Saks Fifth Avenue. Which means you won’t be spending your flight trying to ignore how scratchy your pillow is or how your blanket only covers your mid-torso. Polaris cabin passengers can also request a gel pillow which has the added benefit of staying cool so that whatever side you’re using is the “cool side” of the pillow. 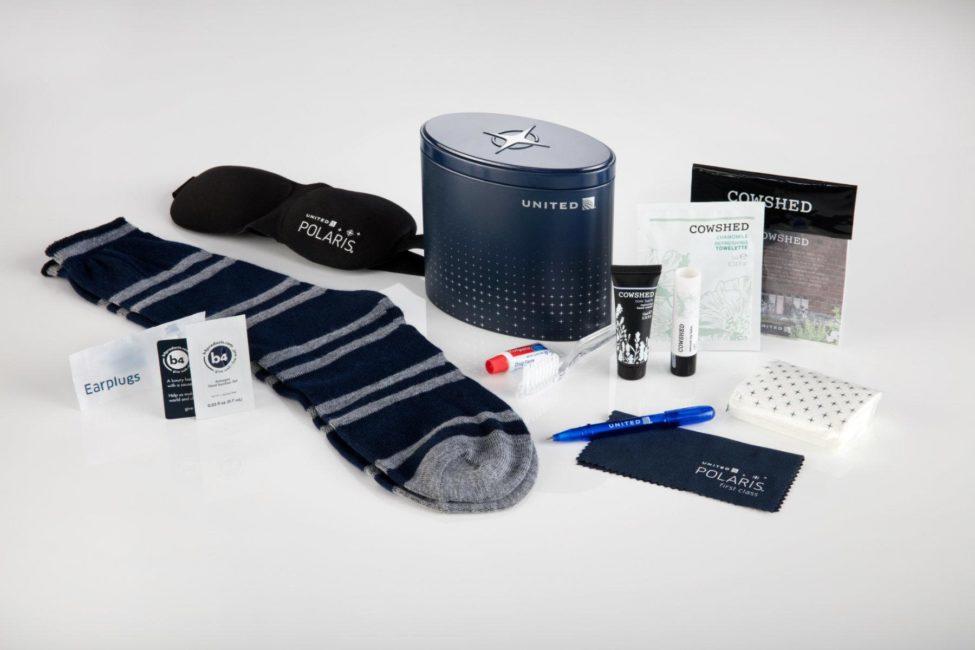 Reykjavik: The amenity kit helpfully ticks off the boxes of things you might not have brought but make a huge difference when it comes to improving your overnight, in-flight experience. I’d just started to regret my decision to wear my hiking boots (I’m unable to shake the unfashionable advice of always wearing your heaviest items on the plane instead of carrying them around in your luggage) when I spotted a handy little pair of sleep socks. All the essentials are there to help you sleep (aforementioned socks, eye mask) and to help you wake up (toothbrush and toothpaste, lip balm). But then there’s room for something I never would’ve thought of like a chamomile scented towelette. In retrospect, I believe it was intended for my face but it made my hands smell wonderful which isn’t bad at all. 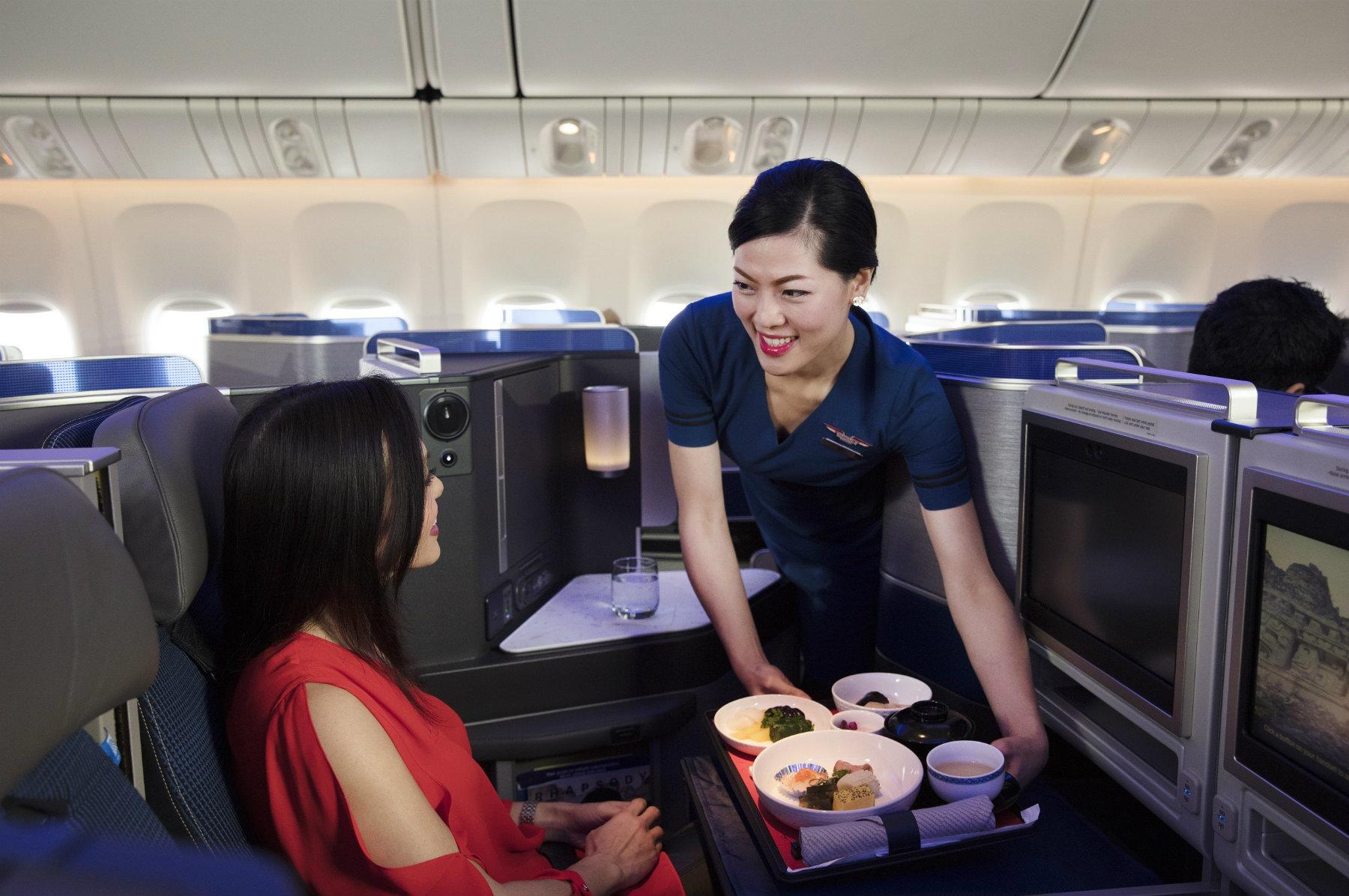 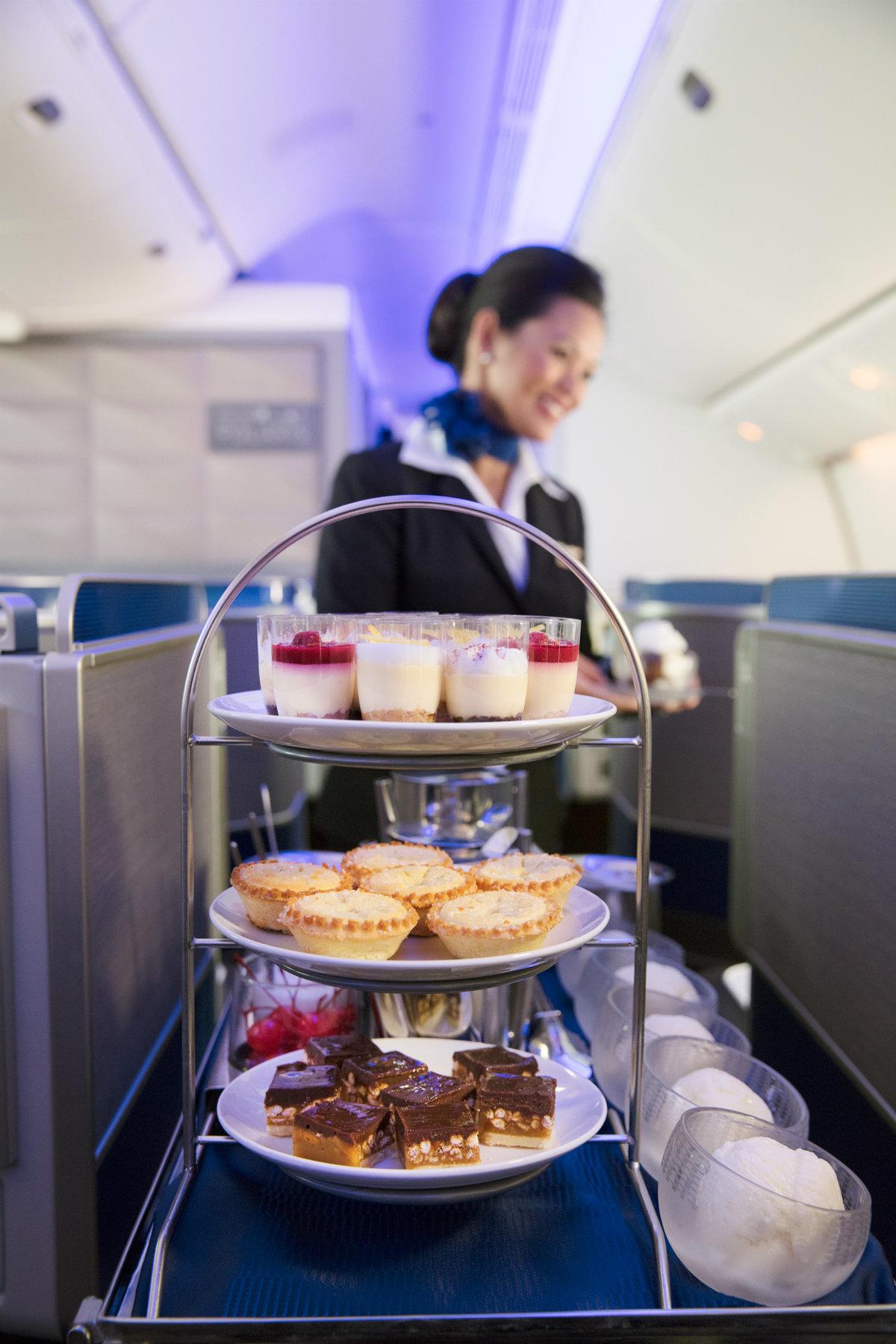 Porto: Polaris passengers are treated to multi-course meals developed in collaboration with The Trotter Project, which mentors youth who are interested in culinary arts. The menus are different on each route, keeping inspiration and ingredients as local as possible; the menus on my flights included fresh pasta, steak, grilled chicken, seasonal salads, and made-to-order ice cream sundaes. Morning brought a very welcome freshly made omelet (I can’t function without a proper breakfast) and buttery croissant.

Reykjavik: Since I had just had dinner a mere hour or so before takeoff and am, alas, not hobbit enough to have back-to-back suppers, I didn’t have the dinner myself. But the meal that was offered was multiple courses with entrees including seared short rib, Thai-style spicy chicken, and portobello mushroom and caramelized onion. The signature sundae cart didn’t make an appearance but passengers could still complete their meal with a sweet treat or a cheese plate.

Breakfast was simple enough—fresh fruit with oatmeal or cereal, both of which came with yogurt, breakfast bread, and fruit preserves. 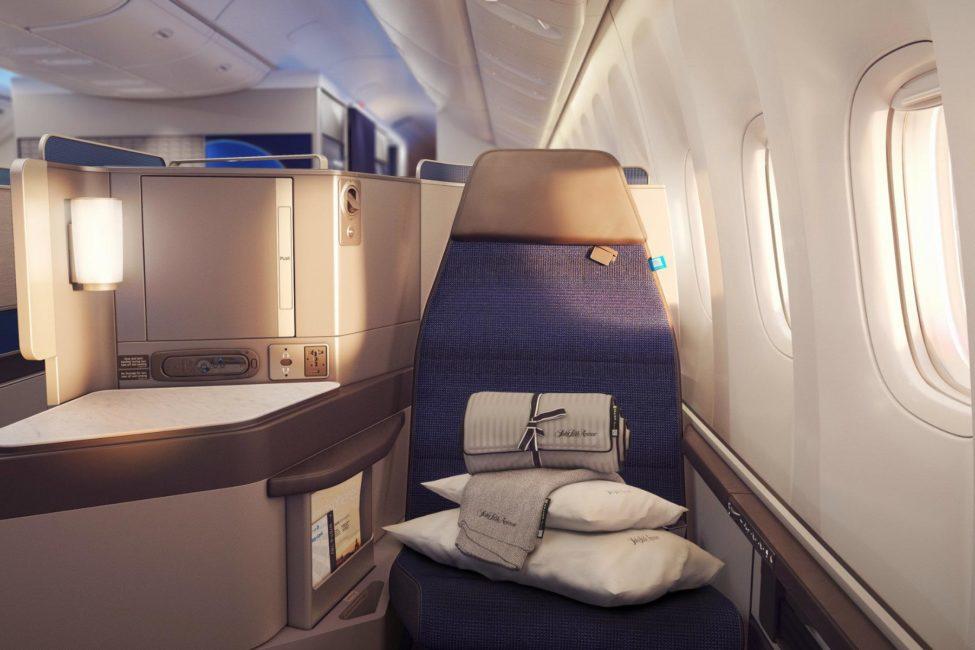 Porto: I kept my screen off for the outbound flight in my ever-hopeful attempt to get as much sleep as possible, but on the way home I was thrilled to find a full listing of recent Oscar-winning films (I opted for I, Tonya) and, even better, several episodes of BBC’s stunning Blue Planet II. Usually, in-flight media options are so dire that I end up watching the flight tracker and despairing over our slow progress across the globe, so this was a welcome distraction.

Reykjavik: Though I’ve been on flights that offered more by way of quantity, I was pleasantly surprised with the quality of movies and TV available in the seatback entertainment. If there’s an awards season darling that you just hadn’t gotten around to watching yet it’s probably available. (I didn’t watch anything on the way to Iceland but I did catch up with The Florida Project on the return flight.)

Though this is more like “out-flight” entertainment, when we landed at our destination we were greeted with a water salute (when two fire trucks spray the arriving aircraft with twin arcs of water). Who doesn’t like a little ceremony with their air travel?

Porto: We got to the airport in Porto a couple of hours early for our return flight, so I decided to relax for a bit in the lounge there before heading to my gate. Porto’s airport is quite small by international standards, but the lounge is still smartly appointed with soft lighting, comfortable seats, a full range of coffees and juices, light snacks, and a well-stocked bar. Note: the lounge is before you go through passport control to exit the country, so be sure to allow time for that.

Reykjavik: There isn’t a United lounge per se at Keflavík Airport, but we did have access to Icelandair’s Saga Lounge. It’s bright and airy, matching stylishly minimalist designs with a comfortable, inviting atmosphere. There are plenty of cozy seating areas, food options, and even showers. But, most importantly, the bar area is self-serve. While I didn’t partake, I feel like I should definitely have the option to help myself to a little pre-noon (or even pre-11 am) sparkling wine should I so desire. 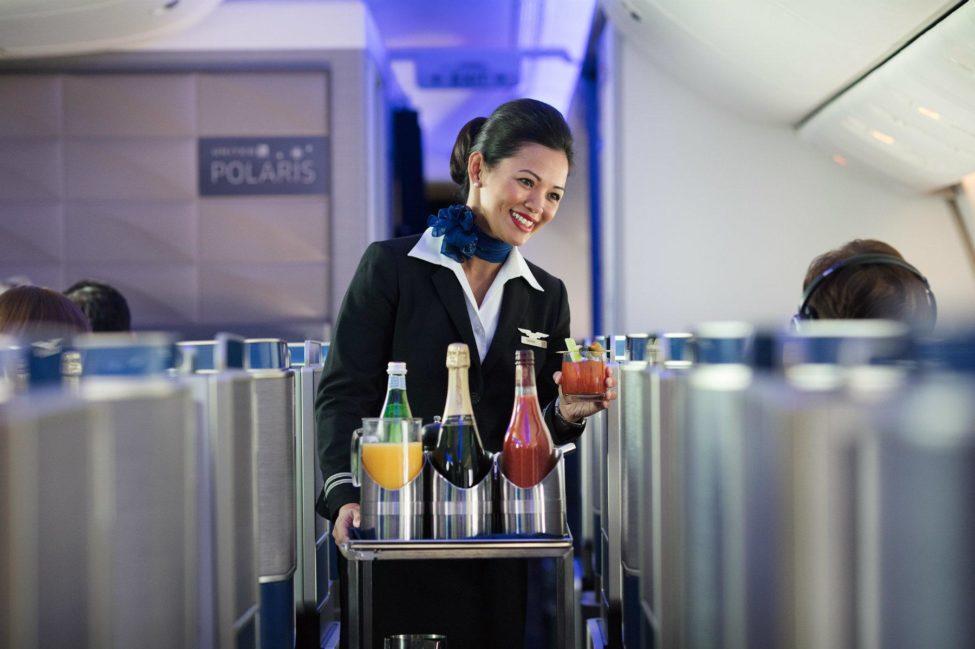 Porto: Confession: while I’m a very cheerful and easygoing traveler once I get to where I’m going, I’m a cranky and nervous flier, not to mention a terrible sleeper. I give major points to United for doing as much as they can to make their premium ticket-holders comfortable, but between the short flight time and my own issues (made worse by a fairly bumpy flight), I arrived in Porto bleary-eyed and grumpy. I fared much better on the daytime return flight when I could take full advantage of the meals, entertainment, and amenities.

Reykjavik: Air travel is inherently stressful because the majority of what happens is outside of our control. So it really makes a difference when an airline takes the things that can be controlled and make them better—even enjoyable. From offering more routes to popular destinations to opening up more of its Polaris lounges, United is doing that. Perhaps the only drawback of this particular flight is that United’s service to Keflavík is seasonal (running through May and October) so if you’re thinking of going for the Northern Lights you’ll have to explore other options. But if you’re interested in experiencing Iceland—even if it’s just a long weekend—United is going to make it easy for you.