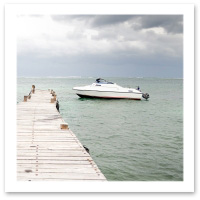 Summer is fast approaching, and for many people, it’s already started. For hurricane-watchers, the season officially starts on June 1 and continues a full six months, until November 30. One question I see a lot in our forums regards the weather one can expect to find in the Caribbean during the summer, when airline and resort prices tend to be lower. Most people want to know the answer to only one basic question: Will it be raining during my vacation? While I can’t tell you that, here’s the truth about some frequently-asked questions about Caribbean weather in the summer.

“What are the chances of a hurricane during my trip?”

Who knows? The chance of a hurricane hitting specifically at the time of your vacation is impossible to forecast this far out. You can lessen the chances of a hurricane hitting during your trip by going further south since most (but certainly not all) hurricanes end up going north of the windward islands from Martinique to the south. Hurricanes are much less likely to affect the ABC Islands (Aruba, Bonaire, Curaçao) to the far south. Similarly, Barbados, which is 100 miles further east of the rest of the windward islands and, consequently, not affected as often by strong hurricanes, which usually pass to the north, but Barbados is also a bit rainier than most of the other windward islands.

“Isn’t summer the rainy season in the Caribbean?”

Yes and no. Although the region as a whole does get more rain between June and late December, you’re as likely to get a week-long downpour in January as you are in October. The so-called “Christmas winds” can bring days of wind and rain on the heels of sunny, calm weather. Throughout much of the Caribbean, the average rainfall amounts are higher in the fall (especially in October and November) than they are in the summer; in some islands, there’s a break in rain starting sometime in July and continuing into early August (unless there is a hurricane). It also matters a great deal where you go. The larger the island the wetter it tends to be; the large islands of the Greater Antilles, including Cuba, Hispaniola, Jamaica, and Puerto Rico, get more rain than the smaller islands to the east and south (except for Barbados, which does get its share of rain for a relatively flat island). Smaller islands that are not mountainous tend to get less rain, so you’re somewhat more likely to see rainfall on St. Maarten than on nearby Anguilla.

“The weather forecast shows rain every day during my trip? Am I going to be miserable?”

While rain may be forecast every day, it’s more likely to happen in short bursts rather than as sustained rainfall (unless you have the misfortune to be visiting during a tropical storm or hurricane), and this means you may see a half-hour or more of rain every day, but usually only in the afternoon or evening. So it’s entirely possible to have rain every day of your vacation but also have the rain not really affect you very much. Sometimes, you’ll see an intense rainfall for a few minutes, and then the sun will come back out again for the rest of the afternoon.

“Is it too hot in the Caribbean during the summer?”

“Should I buy travel insurance if I plan a trip to the Caribbean during the hurricane season?”

Travel insurance usually only pays off when a hurricane occurs during the dates of your vacation. Look for a policy that allows you to cancel for any reason; these are expensive but will give you the greatest amount of flexibility to make new plans if a major or minor storm threatens your vacation. Before you buy expensive travel insurance, see what kind of guarantee your tour packager or hotel offers. Some places offer a so-called “hurricane guarantee”; if your resort or packager offers this, then you may not want to buy an additional policy. However, these guarantees don’t help you if you just get plain old-fashioned rain for a week and not a hurricane or tropical storm, and this happens from time to time regardless of the season.

From the Forums: Which is the best Caribbean destination for $1200-1400 for two?