Plenty of mountain towns have craft breweries, but did you know that many now boast craft distilleries, too? Often family-owned, these boutique facilities are turning out award-winning craft spirits ranging from oat-based whiskey to sweet-corn vodka. The secret ingredient? The pure, mineral-rich spring and snowmelt water found in these high-altitude areas. Here are five such craft distilleries, where you can stop in for a tour and a taste of some good ‘ole homegrown hooch. 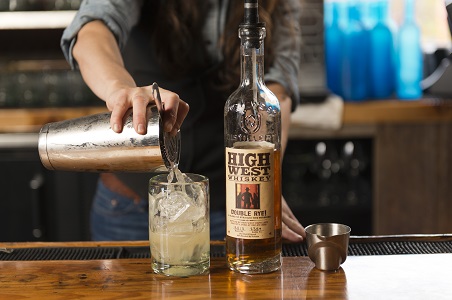 Seemingly, the words "Utah" and "distillery" don’t go together, but in the alpine playground of Park City, they most certainly do. Interestingly, High West Distillery & Saloon, housed in a former livery stable dating from the town’s silver mining heyday, was the first legal distillery to open in Utah since the 1870s. Belly up to the bar at the Western-themed saloon and sample some of the house-made sour mash like the Double Rye and the Western Oat (an oat-based white whisky). Can’t make one of the daily tours? Have a staff member point you in the direction of the 250-gallon copper pot still visible behind a glass wall.

Don’t Miss: High West’s Campfire is a blend of rye whiskey, peated scotch whiskey, and bourbon, creating a one-of-a-kind spirit that’s sweet, spicy, and smoky, all at the same time.

At an altitude of 9,600 feet, Breckenridge Distillery—started in 2008 by physician and whiskey lover Bryan Nolt and his partner, master distiller Jordan Via—is one of the world’s highest distilleries. The spirits they create, using local mineral-rich snowmelt water, include bitters, sweet-corn vodka, and its most popular product, Breckenridge Bourbon, an award-winning amber-hued hooch with a brown sugar aroma. Tours are offered in the distillery just outside of downtown Breckenridge and there’s also a tasting room on Main Street, convenient for a post-ski tipple.

Don’t Miss: The signature spirit is the Breckenridge Bourbon, made from green rye, yellow corn, and unmalted barley, all aged in new American white oak barrels. 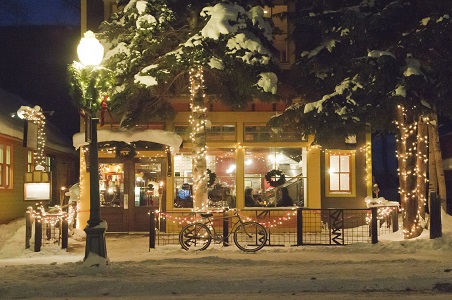 Think rum is only made in the Caribbean? Think again. Montanya Distillers, started by rum-lover Karen Hoskin and her husband Brice five years ago, brings an island flavor to the Rocky Mountains. Its tasting room, reopened in a larger location on the same Crested Butte block, has a festive vibe with a bustling bar, live music, tastings, and tours (there’s also a tasting room in Silverton). Montanya distills two types of rum: the light, crisp Platino, and the dark, full-bodied Oro. Both are aged in American oak barrels and use just four basic ingredients: Colorado spring and snowmelt water, sugarcane, yeast, and a hint of caramelized honey.

Don’t Miss: The bar offers 22 types of rum-based cocktails, including the popular Montanya Sidebar, made with Oro rum, lime and orange juices, and simple syrup.

Not all mountain distillers are out West—showing some love for East Coast small-batch fermentation are Timothy Danahy and Harold Faircloth, former microbrewers-turned-craft distillers who opened Green Mountain Distillers in 2002. In the heart of Stowe, a charming New England village, they produce numerous spirits including Sunshine, a silky-smooth vodka made from Vermont spring water and organic grain. Currently, they’re in the process of building a new facility, expected to open this spring, which will offer tastings and scheduled tours.

Don’t Miss: Green Mountain’s Organic Maple Liqueur is a sweet yet smooth spirit made from locally sourced maple syrup. Sip it straight as an after-dinner drink, mix it in with cocktails, or even add it to drinks like apple cider. 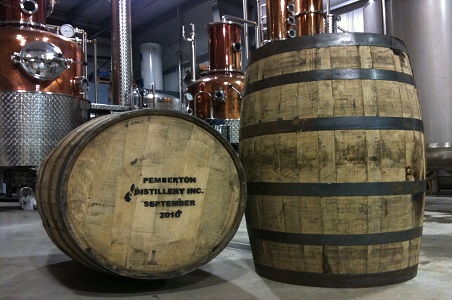 Pemberton Valley, an agricultural region in the Coast Mountains and a half-hour drive from Whistler, is home to a craft distillery started by organic potato farm owner Jonathan Schramm and his master distiller brother Tyler. The pair realized that the chemical-free spuds, coupled with the area’s pure glacial water, were ideal ingredients for making vodka and so, in 2009, Pemberton Distillery was born. Take a tour and learn how the vodka and other small-batch spirits are made by hand in traditional copper pot stills, then enjoy a tasting.

Don’t Miss: While known for its vodka, Pemberton also makes a delicious barrel-aged apple brandy with notes of vanilla and caramel, using apples from nearby organic orchards.

Jill Fergus is a New York-based travel and lifestyle journalist. She has written for numerous publications including the New York Times, National Geographic Traveler, Destination Weddings & Honeymoons, and Tatler.