News Tina Antwi 'Regenerative Travel' Is the New Buzz Phrase, but What Does It Mean?
Home  >  News   >   4 Ways to Get to Greenland

4 Ways to Get to Greenland

When you tell your friends you’re heading to Greenland, you’re sure to be met with a blank stare, followed by: Why on earth are you going there? Do people live there? Do they have electricity? You’re joking, right?

Well, I’m happy to report that your friends back home will be met with an earful upon your return, and they may even be a bit jealous of your experience—because Greenland is not only ground zero for global warming, it’s also one of the most pristine and rugged places on earth. And yes, people do live there. Here’s how to do it… 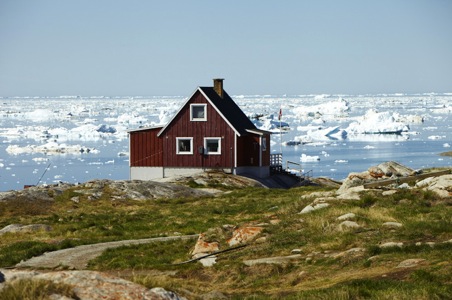 The easiest way to get that much-coveted stamp in your passport is also the easiest itinerary to plan. Take a day trip from Reykjavik, Iceland: a 2 hour flight during the summer months on AirIceland from the city airport gets you to Kulusuk, a small island village on the east coast where you can get a taste for colorful houses and snowcapped peaks. This fleet of small but sturdy dash-8s don’t hold many people, and these trips are sold out months in advance, so plan as early as you can.

Tip: There’s no real border patrol between Iceland and Greenland. You’ll be spared immigration lines, but whatever town you fly into, just ask someone at the airport to stamp your passport. 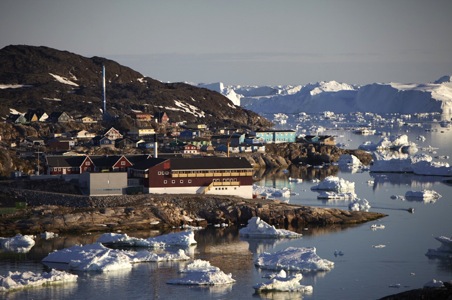 They don’t call this the Paris of Greenland for nothing. But instead of glorious architecture, you’ll find gleaming white icebergs in every shape and size that will blow your mind. The town’s name actually means “iceberg” in Greenlandic, and hiking trails around the UNESCO World Heritage Site Ilulissat Icefjord will show you how pristine yet fragile this snow white landscape is. There are a few small tour agencies that do great excursions during the summer high season. World Of Greenland is a good bet, run by energetic young Scandinavians who make great tour guides for both culture and nature. The midnight icefjord sail is a must for experiencing the midnight sun, and the solar energy cabins at Glacier Lodge Eqi, 50 miles north of town, will give you a comfortable place to rest after exploring the immense Eqi Glacier, one of the most active in Greenland.

Tip: Direct flights from Reykjavik are available on AirIceland, and make sure you get a window seat. Flying over the ice cap is something you’ll never forget. When booking an excursion, keep in mind there is usually a minimum number of participants needed—meaning, if that number isn’t met, you’re out of luck. So PLAN YOUR TRIP loosely and be open to tours you might not have thought of. You definitely won’t be disappointed. 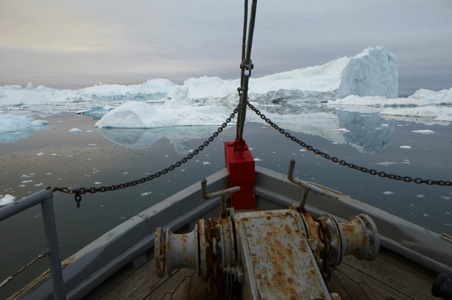 I once heard someone in Greenland say they’d like to rent a car and drive from town to town. The locals fell over laughing, because the only way to get from place to place is to fly or take a boat. Air Greenland is an excellent airline that covers virtually every inhabited corner of the island. Keep in mind: Greenland is not just expensive. It’s very expensive. A 15-minute flight may cost you $500, and a no-frills hotel room might cost over $400 per night, depending on where you are. If you want to sail up and down the more populated west coast, the Arctic Umiaq Line runs from Ilulissat to Qaqortoq in the south during the ice-free summer. Facilities and cabins are basic, but the views are unbeatable.

Tip: Admittedly, this is one of the most difficult destinations to plan. It’s certainly possible with enough research and advance planning, but keep weather delays in mind. You end up waiting at the airport for 12 hours waiting for fog to clear, only to be told the flight is cancelled. People have been known to be stranded for several weeks due to bad weather conditions, so be sure to PLAN YOUR TRIP loosely and leave more than enough time to get back home. 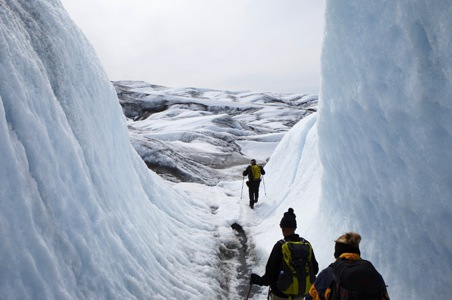 Air Greenland’s beloved Airbus, Norsaq, makes a daily pilgrimage from Copenhagen to Kangerlussuaq (pronounced Kahn-ga-slu-suac), just north of the Arctic Circle. There’s not much to do in this tiny airport town, but this is the easiest gateway to the ice cap, and there are few things cooler (no pun intended) than that. World Of Greenland Arctic Circle offers great tours that let you hike, and even camp, right on the ice cap. Dogsled tours, kayaking, and sea safaris are all available here and in nearby Sisimiut. Check out the beautiful videos at Destination Arctic Circle for more ideas.

Tip: There may be a language barrier if you don’t speak Danish or Greenlandic, but you’ll most certainly receive a royal welcome by the “Greenland Air Force.” By which we mean the infamous Arctic mosquitos, which will attack as you step off the plane. Yes, summer is mosquito season, and they’re ferocious, swarming in your face by the hundreds. You may think youâ€™re safe with 40% Deet, but when they see their target, theyâ€™ll hold their breath and go in anyway. So really be sure to cover up—and if you end up wearing a netting mask, disregard the snickering locals, because you’ll be the envy of all your fellow travelers.