On a small Peruvian island, a battle is playing out between the locals of Amantaní and the travel agencies that book trips there.

Women in brightly colored skirts, wearing long black shawls embroidered with flowers, walk by while herding sheep. Men in fedoras with farming tools resting on their shoulders hurry to get to the fields before the sun gets too high. Amantaní is Peru’s largest island on Lake Titicaca, at 12,507 feet above sea level. Up here, so close to the equator, the sun is intense at midday. This is an island of morning people, and by 6:00 AM, most are already working in the fields.

I sit back to watch the parade of locals. Two donkeys, loaded with freshly cut barley, amble by, but most of the traffic is people and sheep. Besides a few motorcycles, there are no vehicles on this island, and the noisiest traffic sounds come from the pattering of sheep’s feet on the stone paths.

Underneath the surface of this tranquil island, there is trouble in paradise. There are no hotels on the island, and the few restaurants available are small family-owned affairs. Travelers rely on homestays for both room and board. Families rely on tour agencies to bring travelers to the island. Unfortunately for the islanders, many tour agencies pay less than the agreed-upon rate. Despite community efforts to organize, the monopoly that a few agencies hold over Amantaní has stymied efforts to guarantee fair payment for its locals.

“All around, the trip to Amantaní was fantastic,” recalls Sonia Perkins. As an energetic yoga teacher from England, Perkins has traveled extensively throughout her life. She says she loved Amantaní because “as soon as you arrive there, you’re absorbed by this island life, community, and calmness.” Her favorite activity was kayaking around the island, although spending time in the plaza was a close second. “Just to hang out and people watch is definitely up there with the best things to do,” muses Perkins. 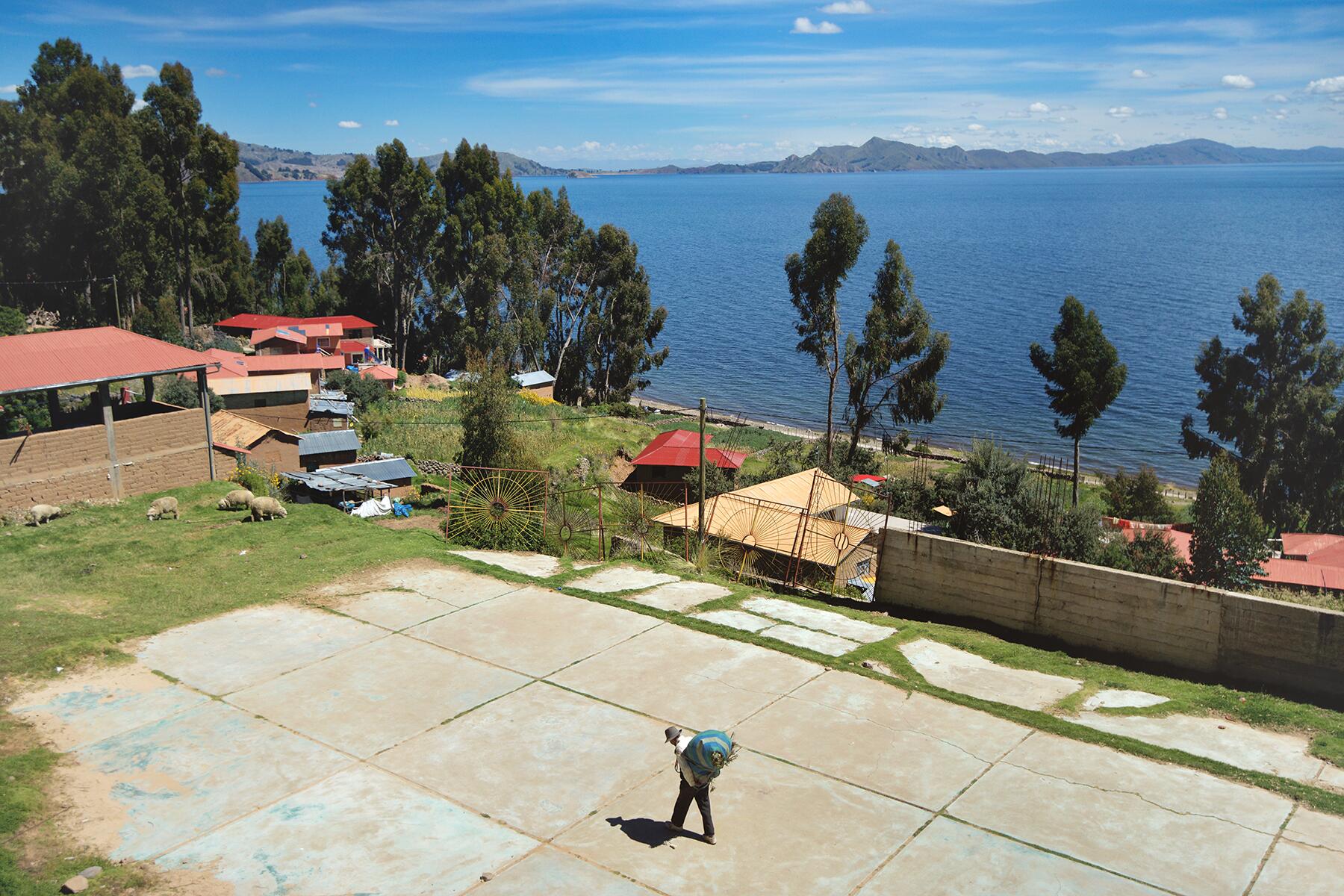 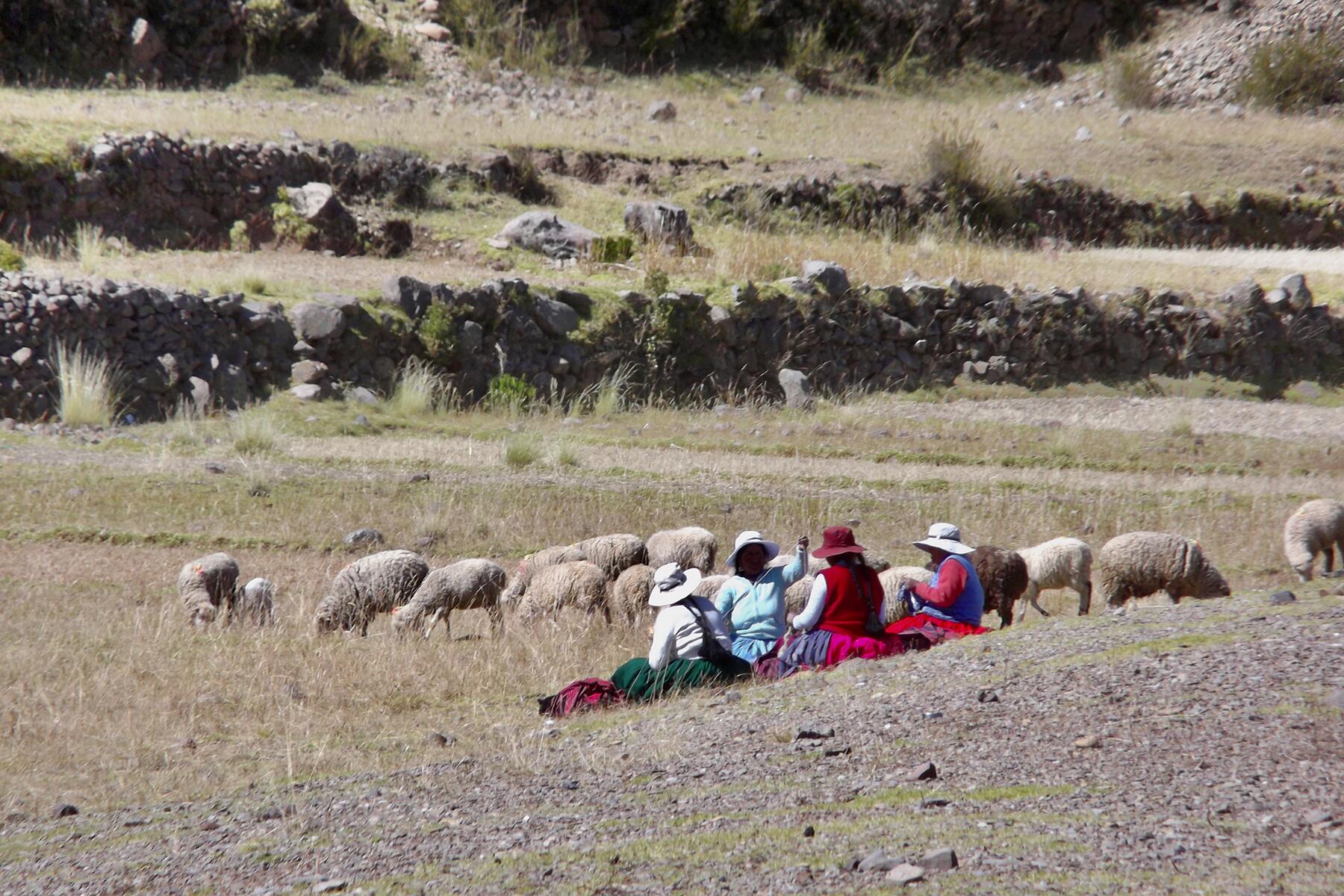 Though less than four square miles in size, there is no shortage of things to enjoy on Amantaní. The first places most travelers go are the two highest points on the island: Pachamama and Pachatata. The top of Pachamama stands at 13,615 feet and offers incredible 360 views of the lake, which has shores in both Peru and Bolivia. The best time to hike is in the evening when you can see spectacular sunsets across the lake, turning the snowy Bolivian peaks a bright pink. “At 4,000 meters, it feels like you’re in the stars,” says Perkins, who recommends staying past sunset to stargaze.

“Everybody here prefers to host independent travelers because they receive direct payment.”

Travelers can fly or drive to the town of Juliaca, and from there, continue on to Puno or Capachica to catch a boat to Amantaní. There are buses from Cusco to Puno, which does not have its own airport. Most boats from Puno are owned by tour agencies, though travelers can request transportation without a homestay.

It’s a two-hour ride from Puno to Amantaní, and many boat rides include stops to other islands along the way. Boats from Capachica are direct ferries, which take about half an hour. It’s best to arrive in Capachica in the morning, as boats are less frequent in the afternoon when the wind picks up and the water gets rougher.

“Go for three nights so that you can fully absorb the island life and slip into that calm and tranquil mentality,” suggests Perkins. “Everybody was so welcoming and so friendly. I couldn’t recommend it more.”

Amantaní is home to ten small communities interconnected through strong ties of family and a shared history of cooperation. This tradition of a communal organization is now being applied to tourism. Abel Mamani Calsin, the former President of Tourism for Amantaní, says that his job involved coordinating with islanders, local government, tour agencies, and guides.

This is an unpaid position elected by the ten local communities. When he was first elected president, his family didn’t want him to accept the role. “They also don’t want me to speak with anybody because they’re afraid,” explains Calsin. “I’ve always told everybody that we have to talk, we have to say what’s happening.”

Calsin explains that the tour agencies serving Amantaní used to pay s/6 to s/8 Peruvian Nuevo Soles per person, per night (which is about $1.50 to $2 USD). This amount didn’t come close to covering the cost of food, let alone the investment required to build and furnish rooms for travelers. When the islanders started to organize in the early 2000s, they set the rate at s/20. Through years of negotiation, the price increased to s/45, which equates to about $11. With this sum, families are expected to provide three meals, a private room, traditional clothes for travelers to wear for photos, and a party with traditional dances after dinner.

“I have to pay when I arrive at a hotel. Tourists pay before they come to the island. Why do [tour agents] delay paying us or forget to pay us?”

In August 2020, Calsin informed the tour agencies that in 2021 the island’s rate would go up to s/60 (less than $15). The agencies initially refused but eventually agreed to s/50. The stress of being the liaison between his community and the tour agencies took its toll on Calsin. When he subsequently resigned, the island lost its advocate, and the President of Tourism position has remained unfilled.

Five years ago, Juan Braulio Pacompi also stopped working in tourism. He used to host travelers in his home but now drives a ferry boat from Capachica. He says that he quit tourism because tour agencies pay two or more weeks late, and in his experience, some don’t pay at all.

“Some agencies delay paying us for so long that they forget they owe us anything,” says Pacompi. “I have to pay when I arrive at a hotel. Tourists pay before they come to the island. Why do they delay paying us or forget to pay us? If agencies paid on time, without debts, that would be excellent. Some pay late, some pay half now and say they’ll pay the other half later, and some forget.”

Another common frustration among islanders is that they are often not paid for all the tourists they host. “I’m not saying it’s all agencies, but some agencies don’t ever pay us for some of the tourists [we host],” adds Pacompi. “One year, an agency didn’t pay us for seven tourists. It’s better to work with Booking or TripAdvisor because they pay before arrival. Also, we can set our own price, depending on the quality of the accommodation.”

As families gain access to the internet, they are starting to market their homestays on Booking, TripAdvisor, and Airbnb. Gerardo Mamani Calsin (no relation to Abel) has welcomed travelers in his home for almost ten years. It’s a traditional adobe house, and he added a second story with four guest rooms, each with an expansive view of the lake. He says that he prefers to host tourists who travel independently.

For now, most of his guests come to him by word of mouth, although he plans to get online soon. “I still have some improvements to make before I register with Booking.com,” he says. “First, I want to build private bathrooms for each room.” The guest rooms in his home currently share one bathroom.

Alexa Mamani Calsin, Abel’s sister, explained that most families don’t want to work with agencies but don’t know what else to do. “I think that everybody here prefers to host independent travelers because they receive direct payment,” she adds. “People can charge a fair price, but if tourists come with an agency, we don’t know how much they pay.”

Calsin knows it’s risky to speak out now, but he hopes it will not directly impact his family. He and his sister run a small shop out of their home and host a few travelers who visit them by word of mouth. “They are more like distant relatives than tourists,” says Calsin warmly.

For Pacompi, who was raised on Amantaní, he remains frustrated with the tour agencies and agrees with Calsin that it’s time to speak out. “There are people here who want to tell the truth about what the agencies do to us,” adds Pacompi.