“Voluntourism” has received a lot of criticism in recent years. In 2000, I worked as a conservation volunteer in the Ecuadorian rainforest and returned 20 years later as a visitor.

It would take less than 20 years for the sapling I held in my hand to grow as tall as the trees around me. Or, so I was told. Covered in sweat and Amazonian mud, I wanted to believe it. I’d traveled from England to Ecuador to work as a conservation volunteer, and my reward for sleeping in rustic huts with cockroaches, spiders, and rats was to plant trees and maintain trails.

The journey to Jatun Sacha biological reserve involves a stunning six-hour journey from Quito, past volcanoes and through deep-forested valleys. After days of hard physical labor, I could enjoy the “tourism” part of voluntourism—we’re talking climbing an old radio mast to reaches above the canopy and being taken on guided walks through the forest.

So who benefited most: me, the locals, or the forest? All the full-time staff lived in the area, and they were the ones who were skilled in conservation, cooking, and botany. Not only was the forest being restored and preserved, jobs were also being created. It seemed as though this scheme was having a positive impact on the area.

I don’t, however, believe that anyone got more out of the experience than me. I learned to appreciate just how special a tropical rainforest is. I became a much more independent person, and I saw some unforgettable sights.

When I returned to Jatun Sacha almost 20 years later, I’m happy to say that the forest seems to have benefited, too. The trees I had once planted did now appear to have grown to an impressive height. The trails I’d once maintained were still all there. Amazingly, those rustic huts were still standing, as well. If I’m being realistic, I imagine that the money I paid to volunteer was more helpful than the physical work I did, but if that’s what it takes to protect the rare primary forest, then I’m OK with that.

In 2000, the last part of the journey to Jatun Sacha was either via a motorized canoe along the Napo River, or a hitched ride along a long, rugged track. Part of the reserve’s appeal is its remoteness. Life is very different deep in the rainforest; communities are much more self-dependent, and you get used to sights such as a giant snake living in the speaker of the local bar (it just loved those vibes). However, Jatun Sacha no longer feels quite so remote. 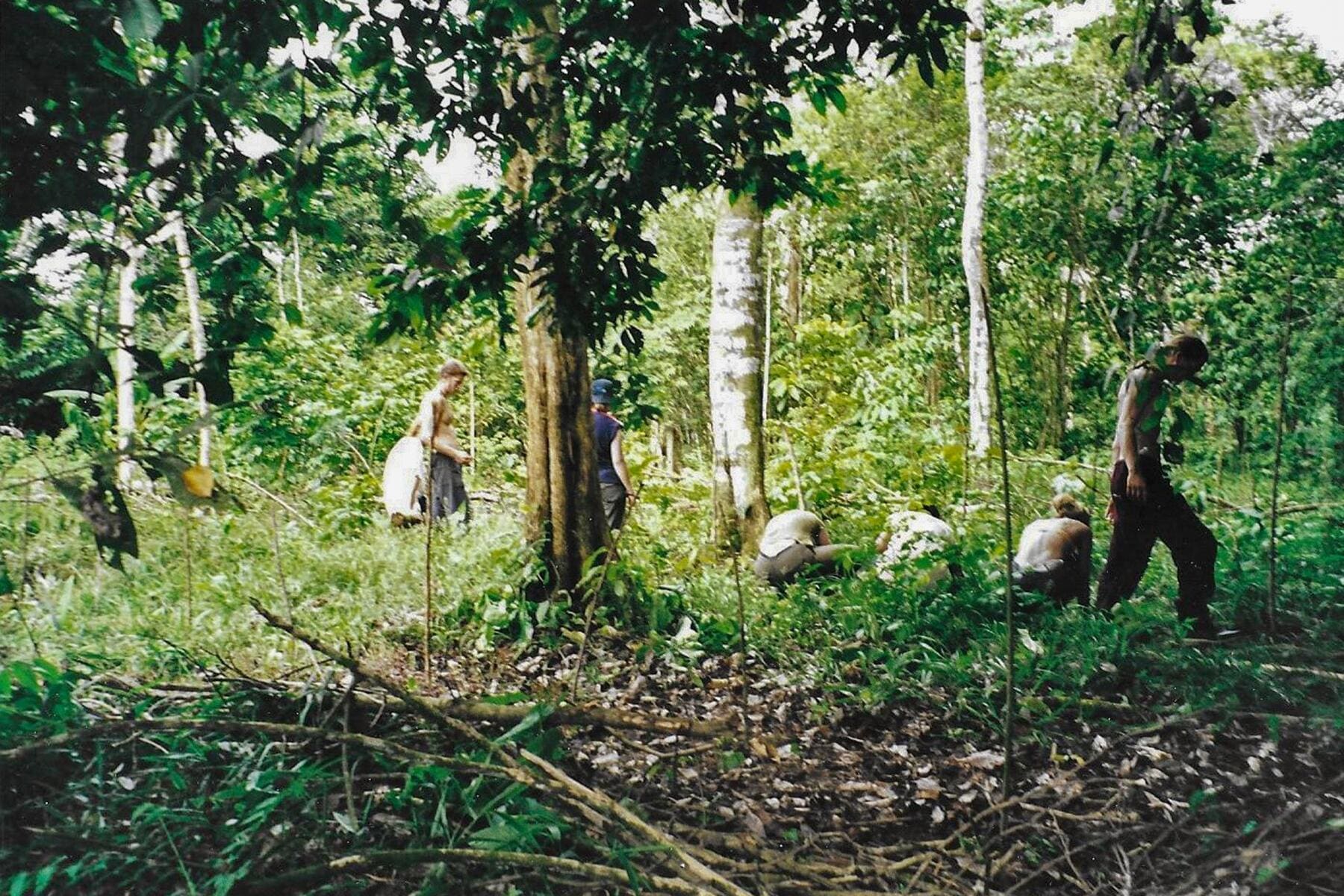 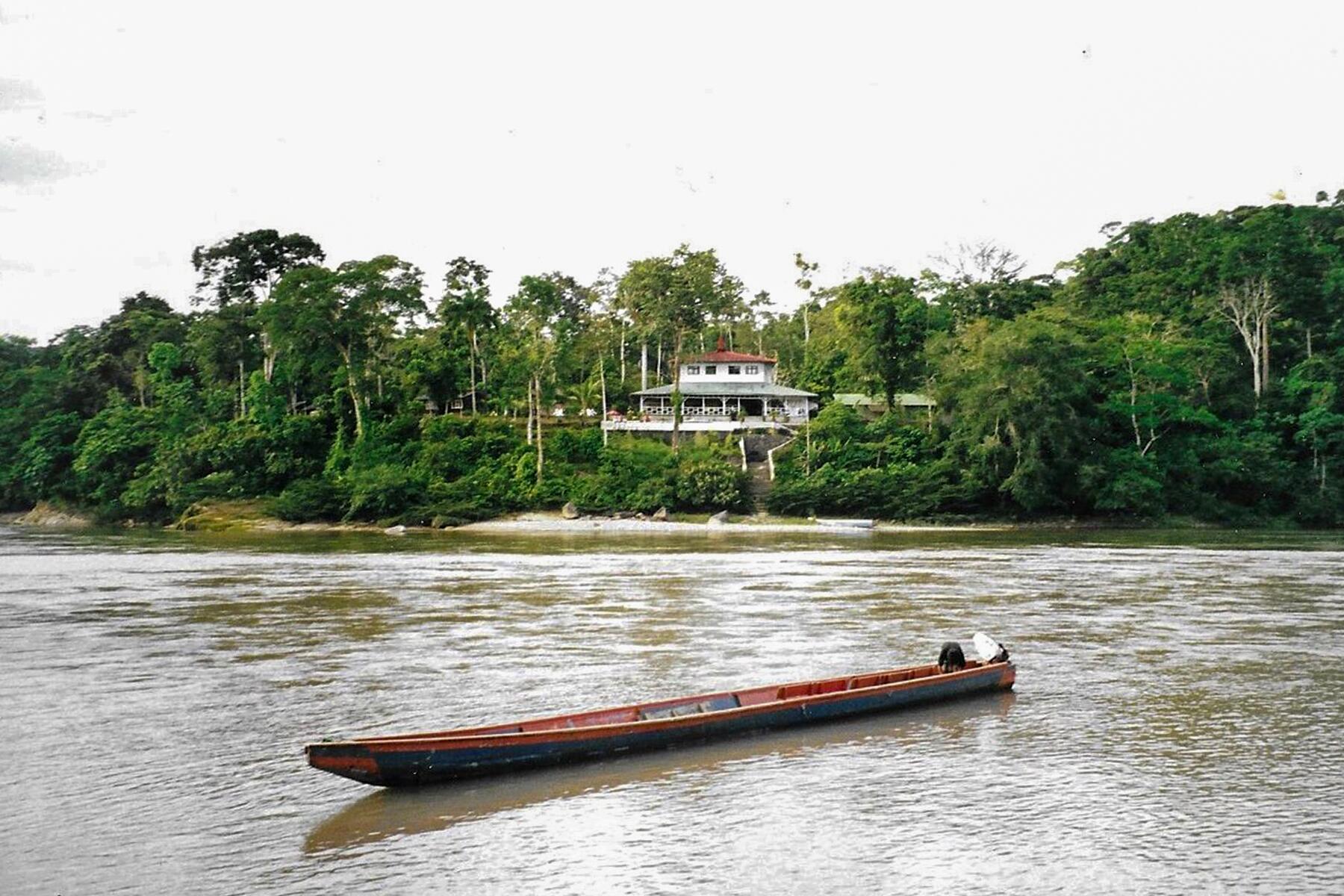 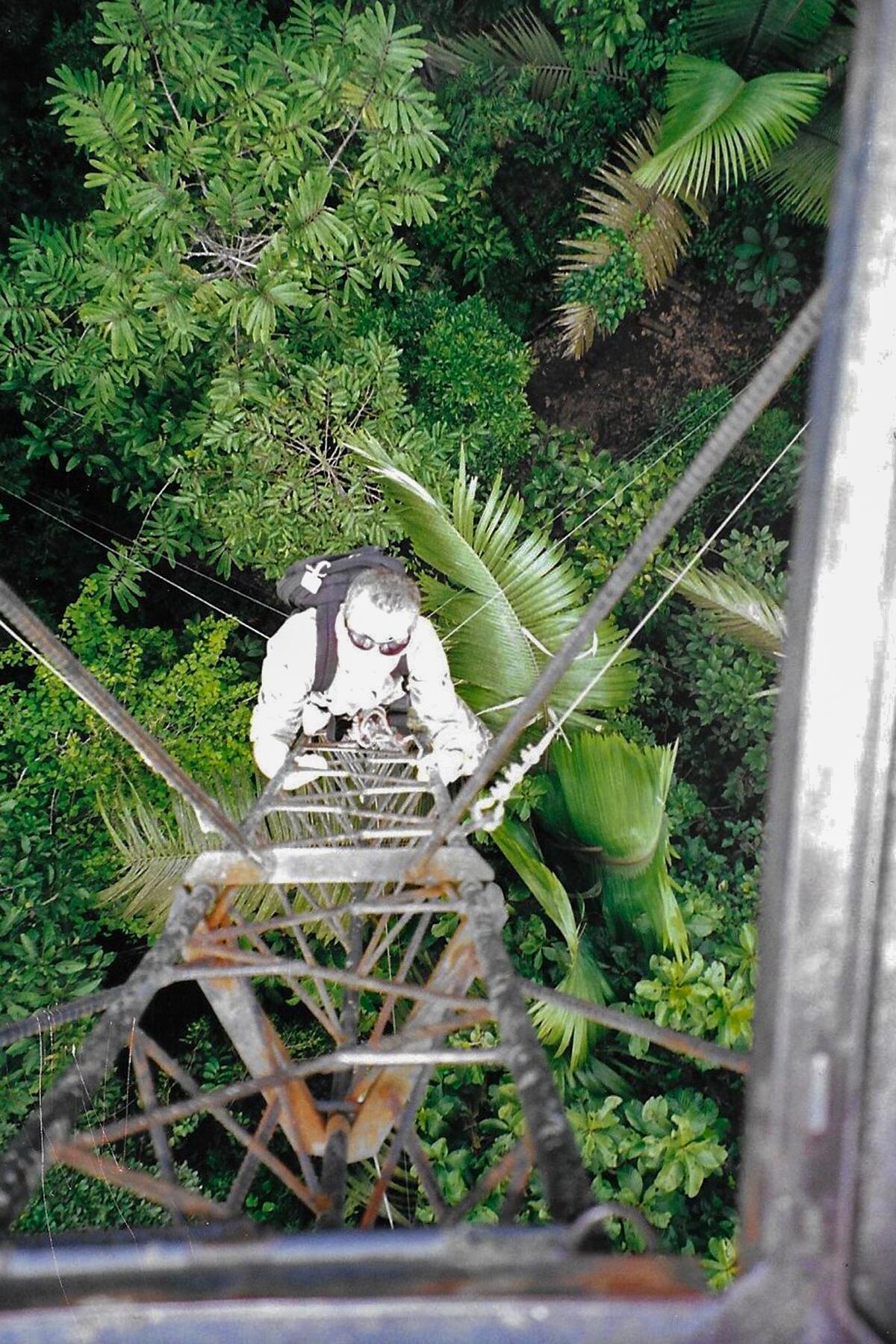 1. Clearing pathways.Olly Beckett 2. The motorized canoe taking us to and from camp. 3. Climbing into the canopy

When I returned to the reserve, I was able to take a taxi for the last part of the journey along a bridge (goodbye, motorized canoes) and along a tarmacked road (goodbye, rugged track). “Has the bridge always been there?,” I asked the taxi driver. “Yes, it was built 10 years ago.” It looked as though it had been there much longer—the humid air of the Amazon can have that effect on infrastructure. And if that bridge already looks so old…well, I’m going to avoid thinking about that when I look at those pictures of myself from 20 years ago.

This new infrastructure also includes an international airport, which has appeared just five kilometers (just over three miles) from the entrance to Jatun Sacha. Intended to bring in tourists to the area, the airport has already proved unviable. It no longer has scheduled flights and so will be turned over to the Ecuadorian Air Force. I was shocked to discover that what was once rainforest had become the airport, and while I know that tourism can be a force for good (I’d much rather money was generated by ecotourism than oil drilling), there had already been a perfectly decent airport just up the road.

Because a lot of the Jatun Sacha forest is so dense (particularly where there has been secondary growth), it’s hard to find your way around. But I managed to return to that old radio mast, and I found my way to the Napo River—a great place to wash all that mud and sweat off (if you don’t mind the currents, anaconda, and candiru fish). 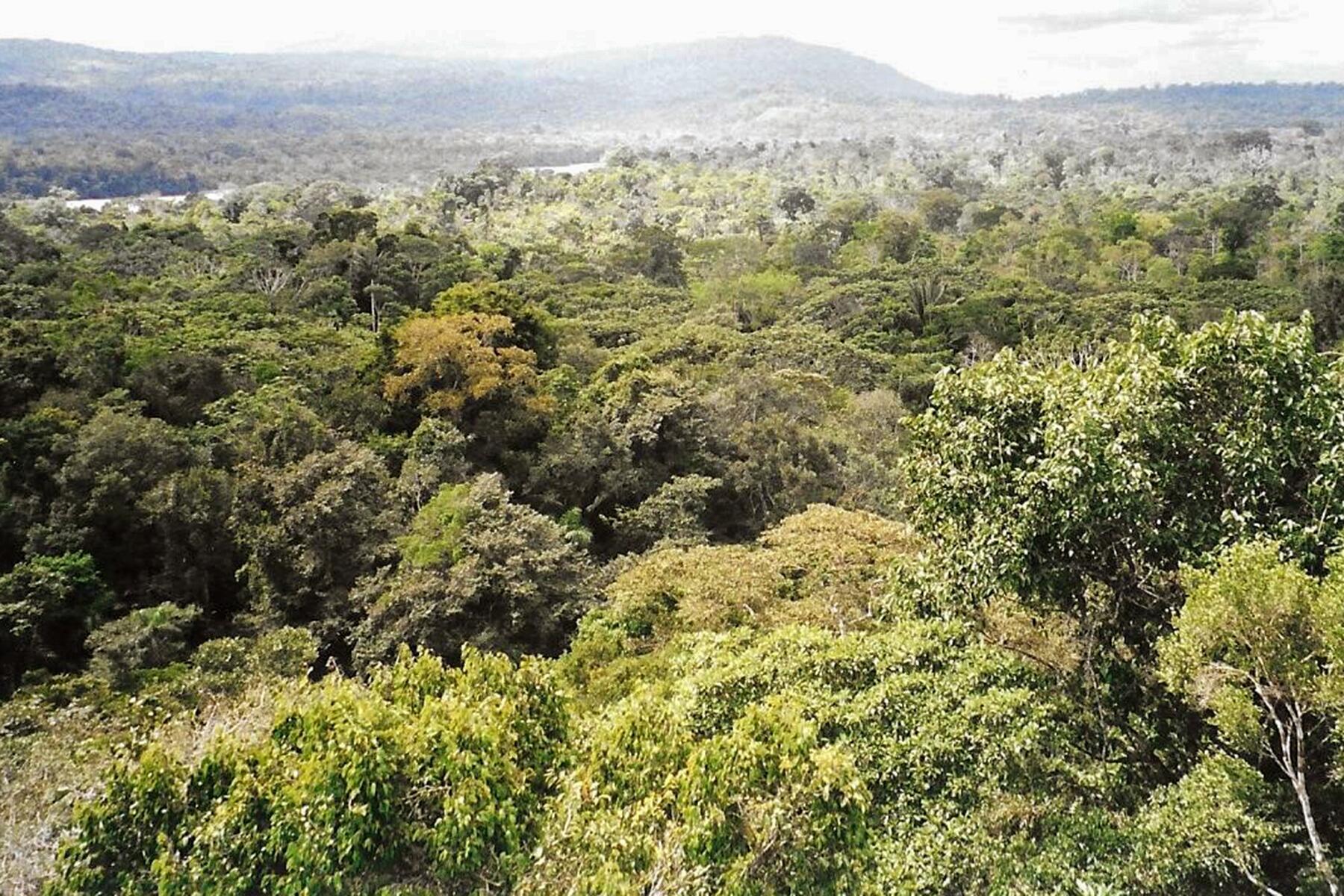 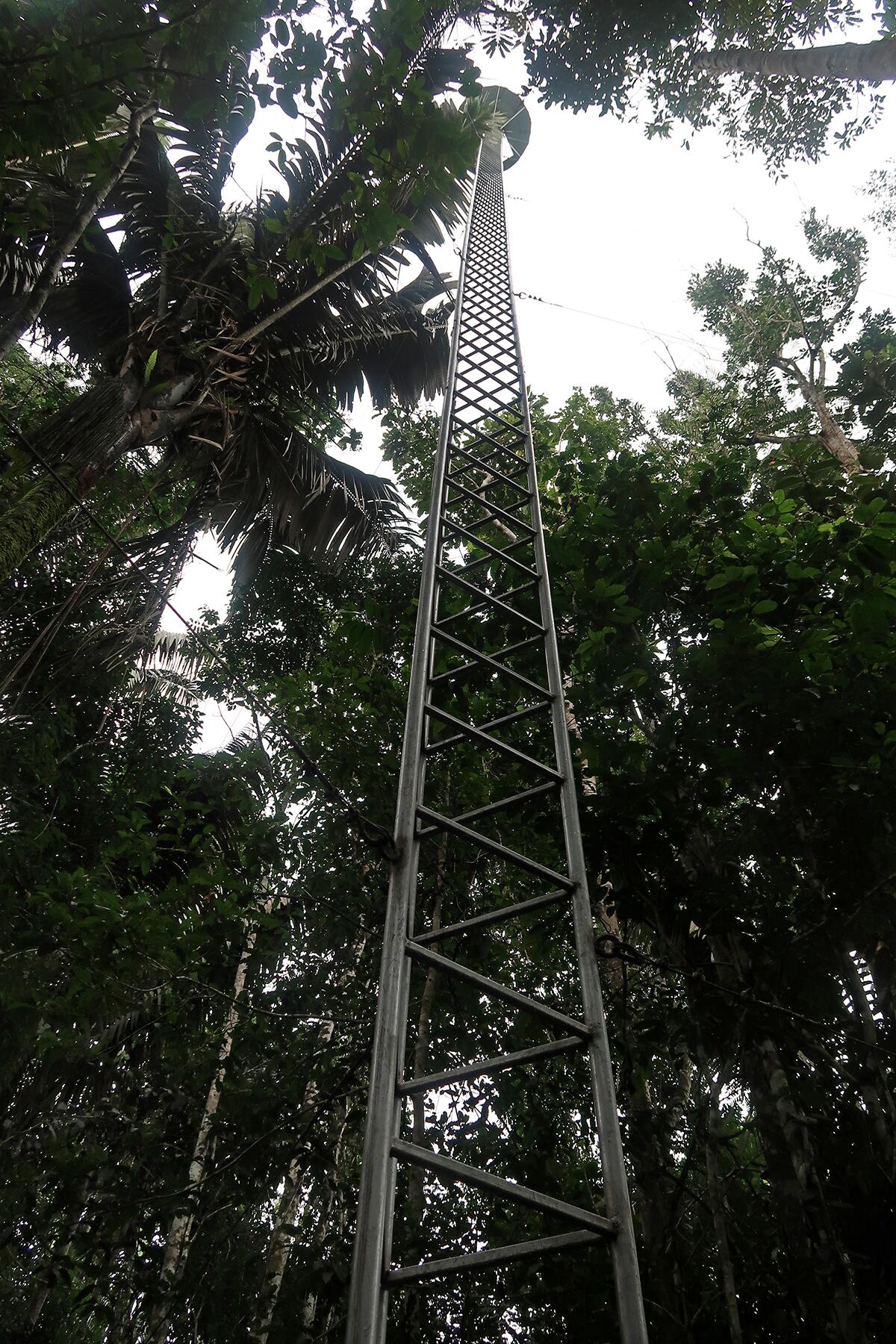 1. Climbing radio masts allowed for incredible views above the canopy.2. A radio mast I found and climbed on my recent visit.Olly Beckett

Voluntourism can be harmful, as many people are right to point out. It can replace jobs done by locals, it can break up families (particularly orphanage volunteering), and it risks perpetuating a white savior complex. When questioning my motives, I may have fallen into the latter, but I was under no illusions that I was mainly undertaking this work for my benefit. It had taken a long time to earn the money for this experience, and so I wanted some reward, too.

If you’re keen to try voluntourism, then these are some questions I’d recommend asking yourself:

When I returned from one of the hikes on my recent return to Jatun Sacha, I happened across a group of young volunteers. They were tourism students from Cuenca, a city in Ecuador’s southern Andes. As part of their studies, they were spending a week at the reserve maintaining trails and staying in those same huts I had once endured. A young generation of Ecuadorians, learning how special their country is, and working at promoting and preserving it.

This is, perhaps, the very best outcome for voluntourism.