Where to Eat in Austin During SXSW 2015 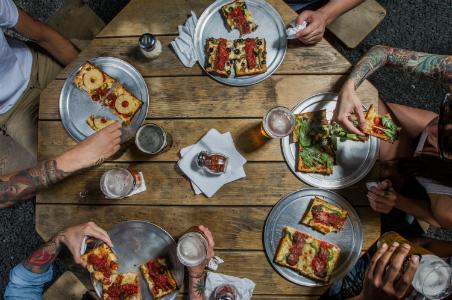 In just a few weeks, thousands of people will descend upon Austin for this year’s South by Southwest Festival (March 13–22), which transforms the “Keep It Weird” city into a thriving hotbed of music, film, and interactive technologies. The 10-day citywide festival is a marathon, not a sprint. People tend to eat (and sleep) in small spurts, surviving on adrenaline, Lone Star tall boys, and whatever free food might be on hand at promotional events or in between shows. But Austin’s culinary scene is just as eclectic as its innovative annual festival, so why not treat yourself in the midst of the madness? Trendy eateries are sure to be packed during prime dinner (and brunch) hours. Most Austin restaurants don’t accept reservations, only seating on a first-come, first-served basis, so with a little planning, whether it’s calling ahead to snag a rare table in advance or simply seeking out popular hot spots outside of peak hours, it’s easy to experience the city’s best culinary offerings. Here are a few suggestions and tips for navigating Austin’s diverse food scene.

Gourdough’s, which promises “Big. Fat. Donuts.” boasts an extremely late closing call compared to other Austin restaurants, staying open until 3 am on Fridays and Saturdays.) Their signature guilty pleasure cuisine is the ultimate indulgence after a long day of alcohol-fueled festival activities. Try one of their extravagant doughnuts—both savory and sweet—like “The Mother Clucker,” featuring fried chicken and honey butter drizzled on top of a fried doughnut, or “The ODB,” cream-filled doughnut holes rolled in icing and coconut shavings. If you can’t polish off the jumbo-sized portions, you can always save the rest for a grab-and-go breakfast—the perfect tribute to the plucky ethos and frenzied pace of SXSW. Where: Rainey Street and 6th Street

This local food truck has become the city’s premier destination for deep-dish, Detroit-style pizza. And Via 313 is expecting an onslaught of crowds during this year’s festival, seeing as both of its locations share lots with popular bars that are smack dab within two major SXSW epicenters—East 6th Street and the Rainey Street District. Its Rainey trailer sits in the backyard of craft-beer heaven, Craft Pride, so an hour-plus wait for their tasty pies—baked in square pans to yield a deliciously chewy crust with sweetly caramelized edges—doesn’t feel all that unreasonable. The food truck still accepts to-go orders, so you can call ahead and place your order to minimize the wait. After nightfall, hungry festivalgoers will flock to the trailer en masse, looking to stave off their impending exhaustion—and hangovers. Once you try signatures like “The Cadillac,” with Gorgonzola, fig preserves, shaved prosciutto and Parmesan topped with a balsamic glaze, you’ll forget that you ever waited at all.

The preppy, Wes Anderson-esque vibe of Clark’s Oyster Bar, located on West 6th Street just a few miles west of downtown, is a great palate cleanser during SXSW. Their swift, expert service; impeccable, yacht-club-chic interiors; and superior selection of fresh seafood and oysters make diners feel like they’ve drifted off to sea—or at least far from the gritty din of SXSW. Seating is limited in the cozy dining room and outdoor patio, so we recommend showing up for an early dinner to enjoy their weekly happy hour (Monday through Friday, 3 pm to 6 pm), when their decadent house burger is half price, oysters are 50 cents off, and all martinis and draft beers are $5. 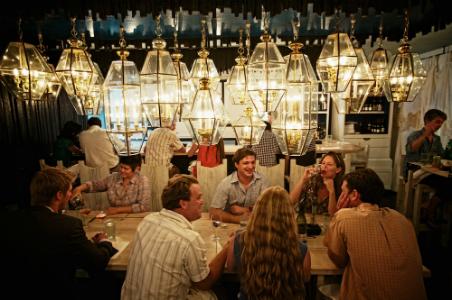 There are only 34 seats in Lenoir’s intimate dining room, so reservations are essential at this buzzed-about Bouldin Creek newcomer, which specializes in a distinctly Texas cuisine that the award-winning chefs like to call “hot weather food.” But a little advance planning and reservation shopping are worth the trouble. Their nightly prix fixe menus offer three-course options ($40) from four categories—land, sea, field, and dream (dessert)—that feature stunning creations like seared antelope heart and bowfin caviar with smoked fish and horseradish. Single off-menu dishes are available a la carte and the European-focused wine list is stellar. We suggest sneaking in as early as 5 pm to secure a table sans reservations or to enjoy an al fresco happy hour (5 pm to 7 pm), when the house wine punch is half-off and free bar snacks are offered in their charming backyard wine garden.

Gardner, the east side’s newest culinary darling, gives seasonal vegetables the rock-star treatment in a sleek, Scandinavian-style interior, with natural hardwoods and tones that match the earthy cuisine. The highbrow concept, complete with spare portions, sizeable prices, and cerebral dishes centered around unlikely stars like beet salad and sunchoke custard, might set off some people’s Portlandia radar, but serious foodies won’t be disappointed. Despite the veggie focus, diners can still find expertly prepared meat and wild game selections—from Cornish hen to Spanish mackerel—for their main course. Reservations are accepted for small parties, but we suggest showing up for either an early or late dinner—the restaurant stays open until 10:30 pm on Fridays and Saturdays—to avoid the dinner rush. 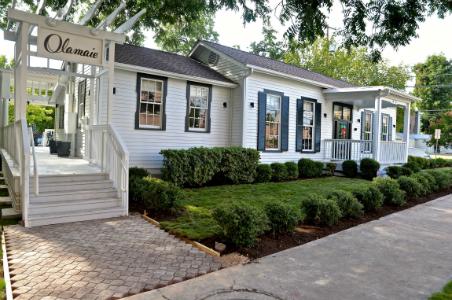 Olamaie (pronounced “oh-la-may”) has been turning heads with its upscale twist on traditional Southern cuisine since debuting this fall in a renovated downtown cottage just south of UT campus. The menu is part nostalgic (think creamed broccoli greens and skillet cornbread), and part modern interpretation. Menus change frequently, but their mouthwatering housemade biscuits are beloved mainstays, made even sweeter with honey butter and pimento cheese spreads. Their patio lounge opens at 5 pm for cocktails and dinner service begins at 5:30 pm. While walk-ins are welcome, reservations are highly recommended, especially since there will be private parties during the festival, so be sure to call ahead.

Cisco’s and Juan in a Million

Breakfast tacos are a daily sacrament for Austinites. It doesn’t matter what time of day or how fancy the establishment: odds are breakfast tacos are on the menu. Unassuming trailers like El Primo and the multitude of Torchy’s Tacos locations top the lists of most festivalgoers, but we recommend iconic breakfast joints Juan in a Million and Cisco’s for an authentic taste of Austin. These two eastside establishments aren’t secret by any means, with cult followings that span generations. Thankfully, their reputations don’t hinge on overblown prices or trendy décor. Juan in a Million is known for its famed Don Juan breakfast tacos, a huge mound of eggs, potato, bacon, and cheese served atop extra tortillas. And Cisco’s straightforward trademarks include migas (generously covered in melted cheese) and huevos rancheros.

Ramona Flume is an Austin-based travel writer and editor, whose work has appeared in publications like Fodor’s Travel Guides, Hemispheres Magazine, and Budget Travel. She’s a regular travel and city correspondent for Austin Monthly Magazine and is the co-founder of Loti, a new, artist-inspired travel journal and online market.