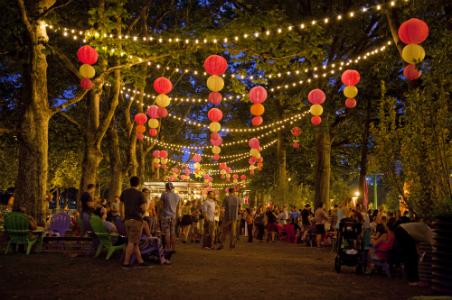 This summer, Philadelphia will transform itself into an urban “resort” with a series of pop-up parks and seasonal beer gardens. With the recent launch of the city's bike-share program, Indego, you can easily hop from one venue to another. Here's a rundown of some of the city's coolest spots to escape from the summer heat.

Beer Gardens With a Mission 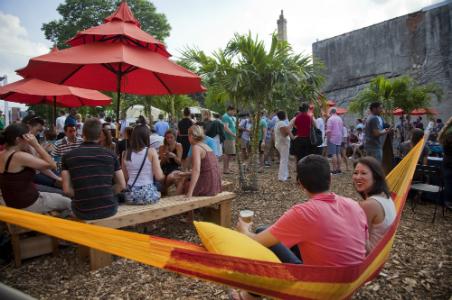 Several years ago, the Pennsylvania Horticultural Society added beer to the lineup at its annual pop-up garden, creating an instant hit attraction. This year, PHS is expanding the number of pop-up beer gardens to three. Proceeds from the pop-ups, which are set to debut the first week in June and run through October 1, will be used for programs like the City Harvest initiative to provide fruits and vegetables from community gardens to 1,200 needy families each week.

The new garden locations include one near the iconic cheesesteak stands of Pat's King of Steaks and Geno's Steaks in East Passyunk. This one sports a lounge-y vibe with beanbags, recycled bike parts, and reclaimed wood stadium seats. Another is near the Franklin Institute, Barnes Foundation, and other attractions on the Benjamin Franklin Parkway, and it will conjure up beach fantasies with palm trees, tropical plants, and cabanas. PHS is also bringing back its 2014 garden on South Street West, this time with a “Bohemian” vibe of palm and banana trees set amid a series of outdoor rooms defined by trellises and container gardens. All three pop-ups will serve a mix of craft beers, wines, and specially designed cocktail and food menus from local restaurants and bars. 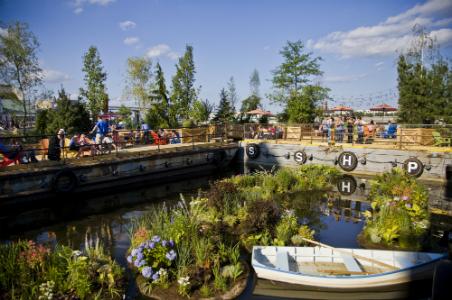 Spruce Street Harbor Park, a boardwalk-themed destination on the Delaware River, returns Memorial Day Weekend with all the elements that made it so popular during its 2014 debut. There will be hammocks galore for lounging; a casual bar-restaurant from “Iron Chef” and restaurateur Jose Garces fashioned from three repurposed shipping barges; floating gardens; ambient lighting from hundreds of multi-colored LEDs; and a boardwalk area with arcade games, soft pretzels and other snacks, and live music. New this year is a classic roller skating rink, with a boathouse-style lodge with food and adult refreshments, a play zone for kids, and rocking chairs for taking in the action. 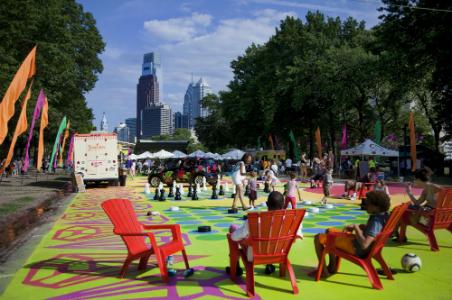 The Oval, a pop-up park across from the Philadelphia Museum of Art, has typically offered a place to relax on colorful Adirondack chairs, play chess on a giant set, and sample offerings from food trucks while enjoying tunes from guest DJs. This year's edition will also feature the only North American stop for Future Sensations, a traveling exhibition marking the 350th anniversary of Saint-Gobain, one of the globe's biggest suppliers of building materials. The show, which runs from May 30 to June 6, consists of a series of temporary pavilions that will deploy digital, 3D technology under the themes of  “Look,” “Listen,” “Color,” “Create,” and “The History and Future.” Meanwhile, The Oval will hold its regular schedule of movies, performances, and family events from July 14 through August 23. 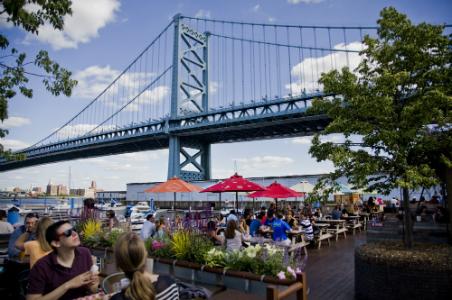 Morgan's Pier, a seasonal beer garden open through the fall, boasts prime views of the Benjamin Franklin Bridge and the Delaware River from a sprawling wooden deck lined with picnic tables and colorful umbrellas. The spot takes its name from George C. Morgan, the first person to cross the bridge after it opened in 1926. This season, the kitchen is helmed by former “Top Chef” winner Nicholas Elmi, who will be serving his haute version of summer food—think citrus-poached peel-and-eat shrimp with Sriracha, a poutine of “dancing Tater tots,” and a fried clam roll with pickled ramp tartar sauce. Morgan's Pier is also offering Sunday brunch and weekday happy hour specials from a bar stocked with fourteen craft beers, custom cocktails, and a “nitro” coffee tap from locally based brewer La Colombe. Music includes DJ sets and an eclectic playlist of live performances. 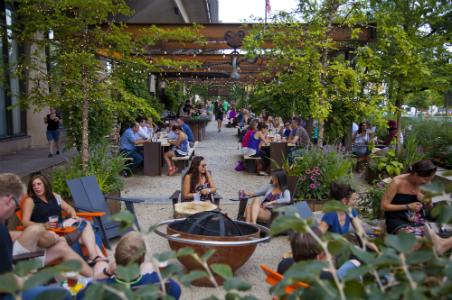 Our forefathers back in 1776 debated the creation of the country behind closed doors at Philly's Independence Hall in the heat of early summer. Fortunately, visitors to the historic district today can quench their thirst in the much more welcoming surroundings of the Independence Beer Garden. Located across 6th Street from Independence Hall and the Liberty Bell, the beer garden boasts a sprawling 22,000-square-foot covered patio; a menu heavy on burgers, ribs, fried chicken, and other picnic fare from chef Michael Schulson; and a wide selection of craft beers and specialty cocktails, like the Cucumber Crush—gin, cucumber, and elderflower.