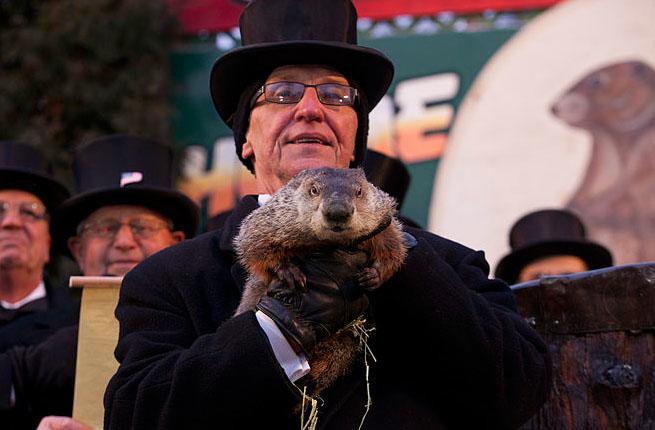 It’s time again for Punxsutawney Phil, the world’s smallest weather forecaster and actual groundhog, to give us his prediction for 2017. But what’s the deal with this guy, anyways? We got some facts for you about him and his holiday – and some of them are very strange.

On February 2, 1887, citizens of Punxsutawney, Pennsylvania celebrated the groundhog’s weather predicting skills by eating groundhog at the nearby Punxsutawney Elks Lodge nearby. Thank you for your weather update! We will now eat your friends. However, when the famed Punxsutawney Phil’s celebrity began to grow, they stopped serving groundhog, because it started to get weird that they were doing that.

Groundhog Day originates from a tradition held by German immigrants who settled in Pennsylvania, where they relied on animals to predict their weather. However, in Germany, they mostly relied on badgers and bears to tell them if it was going to keep being cold or not.

Groundhogs live about seven years, tops. Not Phil, though—he is old as hell, and will probably never die. He is going to predict the weather forever. His handlers claim that Phil has been drinking a special “groundhog punch” at an annual picnic for over a hundred years, which continuously adds years to his life.

When he’s not predicting the weather one day a year, he’s at home in a heated area of the children’s section of the Punxsutawney Library, with his wife, Phyllis. They live a quiet life together.

Phil’s caretakers are called The Inner Circle, which is not a cult but a group of men who walk around in tuxedos and top hats. They wear these because in the 1960s, Inner Circle President Sam Light said that “such an important figure as Punxsutawney Phil should be greeted with a sense of reverence and formality.”

Phil has a beer named after him

It’s called the Punxsutawney Philsner and it is unfortunately not available nationwide, but is a product of Penn Brewery in Pittsburgh, PA.

Phil traveled to Washington DC in 1986 to meet the president

Phil and his handlers met President Reagan. Repeat: this groundhog was flown on a plane to meet with the president. This is a very important 123 year old groundhog.

PLAN YOUR TRIP to Punxsutawney with Fodor’s Pennsylvania Guide