They call Oklahoma City “the modern frontier.” It’s a nice concept, inviting travelers to summon the homesteading spirit of the Great Plains as they savor 21st-century culture. And it’s remarkable how the contemporary part of OKC keeps its cowboy roots kicking. A weekend getaway allows enough time for a snapshot of the Oklahoma state capital, featuring Americana like chicken-fried steak and Route 66, plus surprises like incredible Vietnamese restaurants and a world-class arts collective.

At 6.5 hours, it’s a long drive from Houston up to Oklahoma City, so the 3.5-hour drive from Dallas seems zippy by comparison. Interstate 35 is the long, mostly straight line into OKC across the Red River (the state border). If you’re game for a smaller highway, consider US-77, which opened in 1926 and spans 1,305 miles from the Mexican border up all the way to Sioux City, Iowa.

Where to Weekend Fodor's Editors The Perfect Weekend Getaway: Wilmington From Charlotte
Continue Reading Article After Our Video

The first meal in a new city can set the tone for your whole trip. Luckily, local Chef Kathryn Mathis has two great options for you: Back Door Barbecue or Big Truck Tacos. Both are casual, affordable, delicious, and filling, plus they’re only three blocks apart in Paseo, in case you need to sample both saucy ribs and creative tacos.

You’ll soon notice that Oklahoma City is laid out like a grid with numerical streets, making navigation easy. So from Paseo on the north side of town, head south to Midtown, where you can pay respects at the powerful Oklahoma City National Memorial & Museum, which commemorates the 1995 Murrah Building bombing. 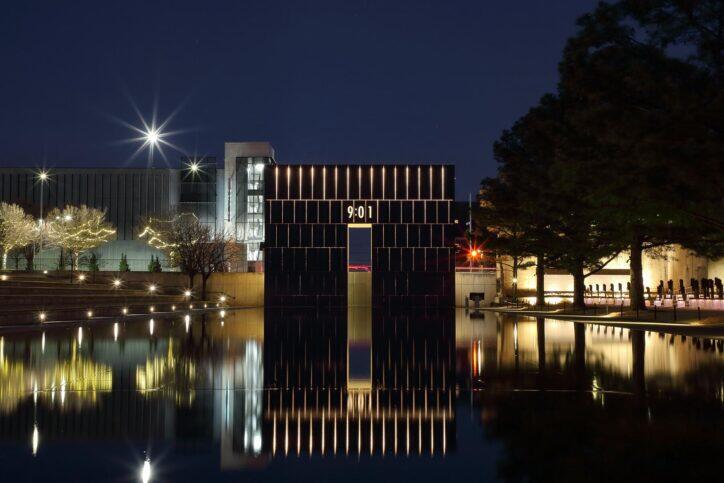 A few blocks away, shift to a bit of beautiful nature at the Myriad Botanical Gardens, a 17-acre wonderland of foliage featuring a tropical conservatory and carousel. Nearby, the Oklahoma City Museum of Art inspires visitors with a variety of visual art, including robust photography and contemporary galleries, and one of the world’s largest public collections of Dale Chihuly glass.

By now you can head over to historic Automobile Alley, along NE Broadway, for shopping, dining, and nightlife. Stop by Sidecar Barley & Wine Bar for fine libation and snacks in the elegant lounge or outdoor patio. For dinner, try inventive Mexican dishes and margaritas at Barrios, or sample seasonal American dishes at Packard’s. If you planned ahead and made a reservation, you’ll love the inventive 10-course tasting menu at compact Nonesuch.

Launch your day with a tasty breakfast at Hatch for excellent “early mood food” that will rouse your taste buds with classics and more daring omelets, waffles, benedicts, sandwiches, and “coffee cocktails.”

Then it’s an easy jaunt to one of the city’s wildest stops, Factory Obscura Mix-Tape. Housed in a converted industrial space that was originally outfitted by indie band the Flaming Lips, Factory Obscura is a local arts collective that stages immersive multi-sensory installations—an artsy, psychedelic outpost unlike anything else you’ll experience.

Shift to Western mode next, with a trip to the National Cowboy & Western Heritage Museum. The museum started in 1955 as the Cowboy Hall of Fame, before evolving into one of Oklahoma City’s top attractions, with nearly 30,000 Western and American Indian artifacts and artworks, not to mention the world’s biggest collection of rodeo trophies, photographs, saddlery, and more authentic frontier relics.

A short trip from the museum is the famous Oklahoma City Zoo, with animal shows and Outdoor Safari Walk tickets available by reservation.

Next, head to the old industrial district known as Bricktown, where you can grab a latte and snack from locally-owned Landing Coffee Co roastery and café. Then stroll through River Walk Park to see the Centennial Land Run Monument at the end of the Bricktown Canal. The monument is a striking assemblage of giant bronze statues depicting 45 early settlers frozen in motion as they race to claim new homesteads.

Keep walking south to join an hourlong tour on the Bricktown Water Taxi on the Oklahoma River. If you’re feeling splashy, head to Riversport Adventures on the north shore for on-site ziplining, slides, climbing walls, whitewater rafting, and more.

By now you should be feeling the real-deal country vibes of OKC, so it’s time to browse the big hats at Shorty’s Hattery or browse boots and more Western wear at Langston’s. Both are in the Stockyards City Main Street historic district on the south shore of the river, where you’ll find Oklahoma Native Art & Jewelry boutique, the free and funky Rattlesnake Museum, and the Rodeo Opry live music venue.

The Stockyards is also home to one of Oklahoma’s preeminent steakhouses. Cattlemen’s Steakhouse has been serving prime USDA beef since 1945 and is now considered a local institution serving all cuts of steak, “lamb fries,” fried catfish, and a mighty fine chicken-fried steak with gravy.

You can channel the early days of road-tripping with quality time along Route 66, which traverses the northwest corner of Oklahoma City. Start with diner-style breakfast at family-owned Stray Dog Café, or hit up Ann’s Chicken Fry House for its famous chicken-fried steak and eclectic Route 66 décor—both of them on America’s Mother Road (locally known as NW 39th St.).

Nearby, take a walk around Lake Overholser, where you can walk a nature trail, rent a paddleboat, and climb up the Cyrus Avery Observation Tower inside Route 66 Park. Top it off with a come from Braum’s Ice Cream and Dairy Store, a regional chain that first opened in Oklahoma City in 1968.

Since this is the Oklahoma capital, you’d be right to check out Historic Capitol Hill for its century-old low-rise architecture, and its grand State Capitol on N. Lincoln Boulevard. Its grounds span 100 acres and you can’t miss its towering Greco-Roman dome, open for self-guided or volunteer-led tours (call ahead for times and reservations).

The stately 1928 Governor’s Mansion is uptown on NE 23rd Street, near the Oklahoma History Center. While you’re in the area, don’t miss a photo opp by the city’s iconic 1958 Gold Dome Building, a geodesic dome that’s now a local landmark just off Route 66.

One of the bigger surprises in OKC is the strong local Vietnamese community and food culture. So cap off your visit with a fresh pho soup, banh-mi sandwich, and bubble tea in the Oklahoma City Asian District, sometimes called “Little Saigon.” You’ll find a busy cluster of Vietnamese-specific and pan-Asian restaurants there, on N. Classen Blvd. near Oklahoma City University. Pho Lien Hoa is a local favorite, but there are plenty more good ones, like Pho Cuong, and Lee’s Sandwiches. So fill up for your drive home, or invest in a tasty lunch to go.

It’s easy to book a room at one of the hotel chains dotting the OKC map, including big names like Marriott, Sheraton, Hilton, Hyatt, and their boutique brands. For an independent hotel, The Colcord is a nice stay near the botanical gardens, with modern accommodations in a historic high rise. The Ambassador Hotel Oklahoma City has Art Deco details and a rooftop pool, while 21c Oklahoma City is part of the Museum Hotels collection, featuring art galleries and Mary Eddy’s Kitchen x Lounge.

The Great Plains climate comes with a few weather extremes, like snowy winters and very hot summers (90 to 100 degrees Fahrenheit much of the season). March through June and October tend to be the months that bring tornadoes, so keep an eye on weather forecasts when planning your getaway.