The best way to see New York City in a new light is to imagine its past—and remember to look up.

Touted as a “Walking Tour for Music Nerds”, tour guide and musician Jesse Rifkin takes groups to the New York City haunts of impactful musicians from a medley of genres, from the birth of punk in the mid 1960s to indie-rock heavy hitters of the ’90s up through the early aughts, and the disco, hip-hop, and short-lived no wave eras in between. Rifkin’s one-man company, Walk on the Wild Side NYC (named, of course, after the Lou Reed track of the same name), offers tours that focus specifically on one musician or band, including the understated avant-garde post-disco musician and songwriter Arthur Russell, and seminal No Wave favorite Sonic Youth, while others mix a variety of artists and genres to show how they all fit together.

Three of Fodor’s editors opted for Rifkin’s Post-Punk, Disco, and Hip-Hop Downtown tour to get reacquainted with the city we all call home. We started our tour on the Lower East Side outside of a recently-shuttered restaurant with little idea of what’s in store.

Rifkin has just an iPad with him—not to refer to notes, as it’s clear he has the area’s entire musical history memorized, but to show us photos of musicians in their heydays, and what the spaces used to look like in the years between 1975-1988, which saw the height of scenes that birthed so many albums we know and love, and the ultimate destruction of that bygone era.

At the beginning of the tour, we stood outside of a building that used to be the recording studio and apartment of members of Blondie, the hand-painted sign on the exterior boasting replacement parts and repairs for meat grinders, slicing machines, and mixers. Later we’d come across spaces like Green St. Studios, known as the headquarters of hip-hop in the ’80s and ’90s that is now a Stella McCartney’s. Walking through NoLita, Tribeca, and SoHo, we encountered buildings like this that show their wear, and eventually luxury shops and a brick-and-mortar Google store, whose past lives as clubs and recording studios are nearly impossible to detect. As Rifkin points out, not even a plaque (except for on the outside of former artist haunt the Mudd Club), indicates the rich history of these converted upscale clothing retailers.

Rifkin takes us to spaces where people like Basquiat and Madonna lived, and lofts that went down in value after the 1975 economic collapse that laid the groundwork for this artistic boom. Maybe the artists lived here without hot water, but rent was cheap. We don’t go inside anywhere, but the stories of these past decades are vivid when Rifkin tells them, and you can almost imagine kids from the disco scene stumbling out of the giant Abercrombie and Fitch when it was a nightclub.

During the tour we’re not allowed to jaywalk; it’s one of the few if only rules imposed. This gives us a chance to pause and take in the city, a rarity for New Yorkers caught in the hubbub of getting from points A to B. It wasn’t just bars, clubs or artist dwellings that Rifkin points out to us either, but Xerox shops where band flyers were made and scenesters ran into one another, places where iconic album covers were photographed, and Fanelli’s, a cafe that can be spotted in Desperately Seeking Susan starring Madonna. As the tour goes on, all of the pieces start to fit together: how impoverished artists sedimented their history as rock legends, how their worlds and musical styles overlapped, and how the area eventually outpriced musicians and club kids and turned into a desirable location for high-end boutiques. 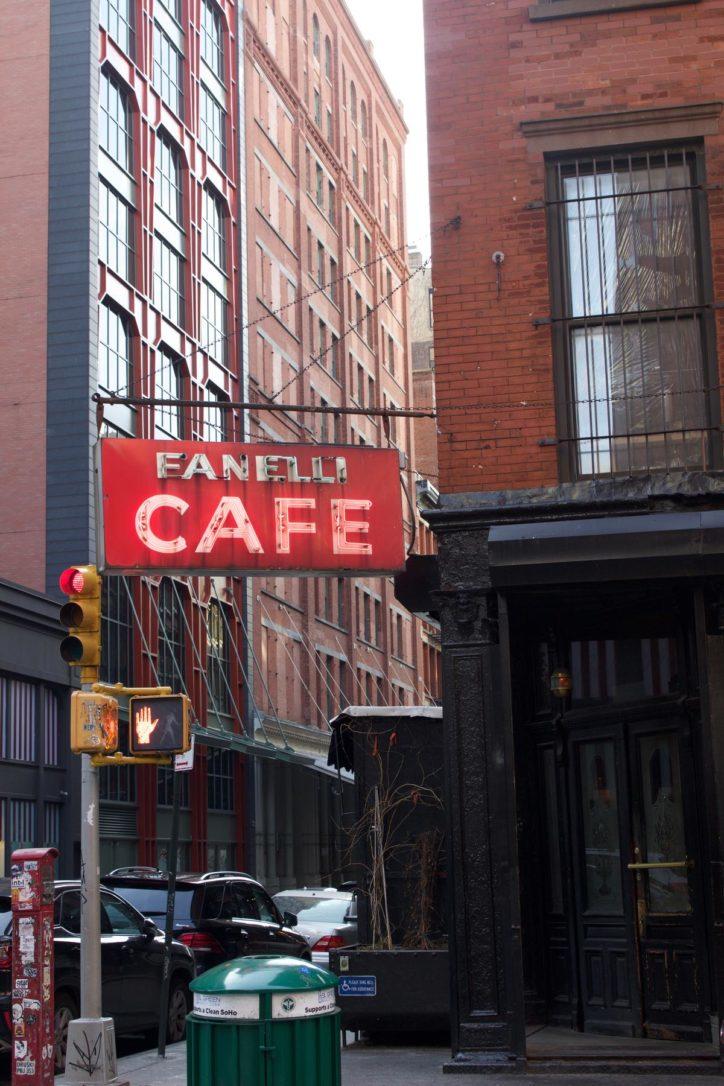 “I’ve lived in the East Village long enough to have gone to concerts at CBGB’s, and yet I still learned so much from our tour—I think it’s because this is a passion project, not something that was calculated to appeal to as many general-interest tourists as possible,” said our map editor Rebecca Baer of the tour.

By the time the sun dipped behind cranes constructing new developments and apartment buildings with fire escapes making up their facade, we were yearning for a time before Broken Windows policing when the city was still a no-man’s land that fostered creativity. But there is a shred of hope with the question of what new generation of artists will make the move next, and where?