An abandoned quarry in Mantua, New Jersey is also the probable site of a mass dinosaur extinction—and now it’s open to the digging public.

About 66 million years ago, the theory goes, an enormous asteroid hit Earth and killed off most of the world’s dinosaurs in a catastrophic event. As the eons passed, little fossil evidence remained to prove this theory–until now. In New Jersey, a pit holding countless numbers of dead dinos was being used as a quarry for marl, a type of sandy soil used as fertilizer. After decades of use, the pit was abandoned. Initially touted as a fossil hot spot, the marl pit was largely forgotten, although its original owner continued to pump out water so paleontologists could explore. A local business had other plans for the site: the remarkable pit was scheduled to be filled in and used as a parking lot for a new shopping center. (Insert your obligatory Jersey jokes here.)

For a while, it was a toss-up between redeveloping the quarry into a new shopping apartment complex and preserving a wet, muddy, messy quarry that seems to be a doorway back in time.

Enter Rowan University professor and renowned paleontologist Dr. Kenneth Lacovara, author of Why Dinosaurs Matter and the discoverer of the Dreadnoughtus dinosaur in Argentina. He theorized that the pit was filled with a great many dinosaur fossils from the same time period as the asteroid hit, and excavating the dinosaurs would prove critical to proving the asteroid theory. Lacovara proposed making the quarry into a permanent dig site, used both for university research and by the public. The pit offers tantalizing clues to what actually happened 66 million years ago: there are so many fossils in this single area, all intact, all of them from the same time period, that this New Jersey pit could offer the best proof yet of the mass extinction event theory. For a while, it was a toss-up between redeveloping the quarry into a new shopping apartment complex and preserving a wet, muddy, messy quarry that seems to be a doorway back in time. Rowan acquired the land and halted the plans to fill in the quarry. 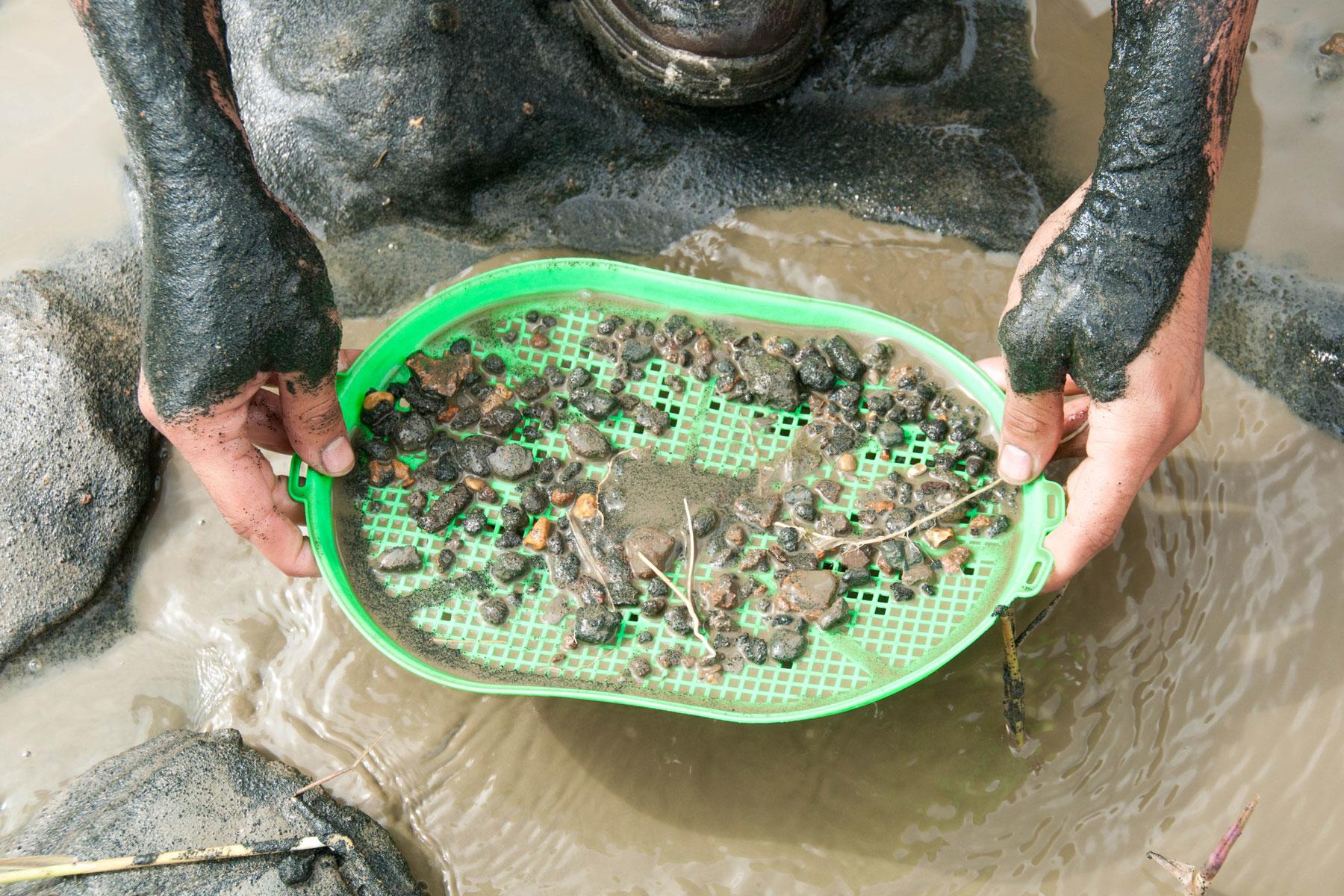 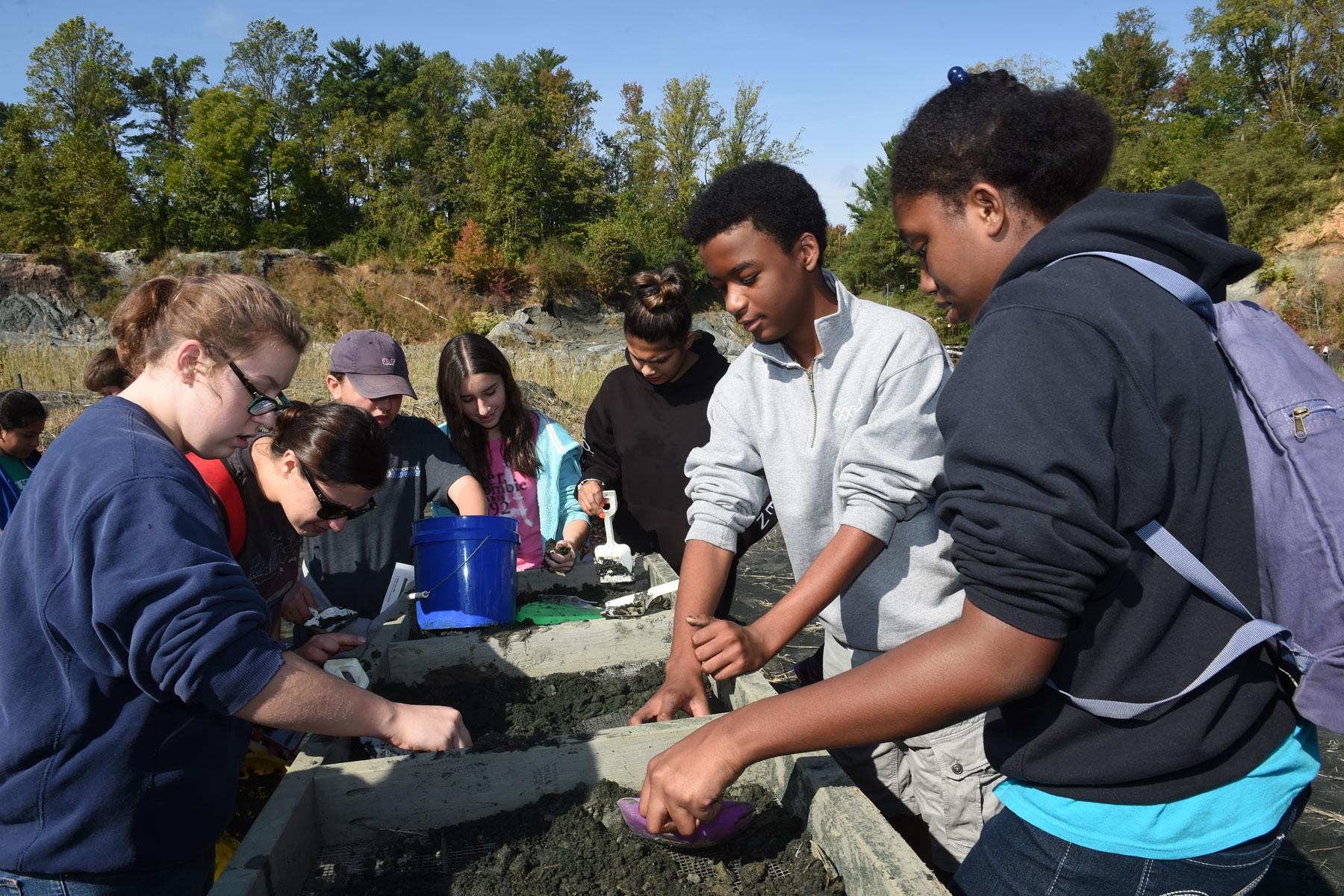 Dr. Lacovara began hosting an annual open dig day in 2012, and the program soon expanded. The 65-acre pit is now called The Edelman Fossil Park and formally opened to visitors in 2016. About 15,000 fossil enthusiasts have walked down into the pit to dig for remnants of the past. Edelman now hosts several open dig days per year, and visitors can sign up here for the opportunity to spend a few hours in a quarry deep enough that diggers can actually see some of the iridium stripe created when the asteroid hit the Earth. The most recent dig day at the park had 2,000 registered visitors. 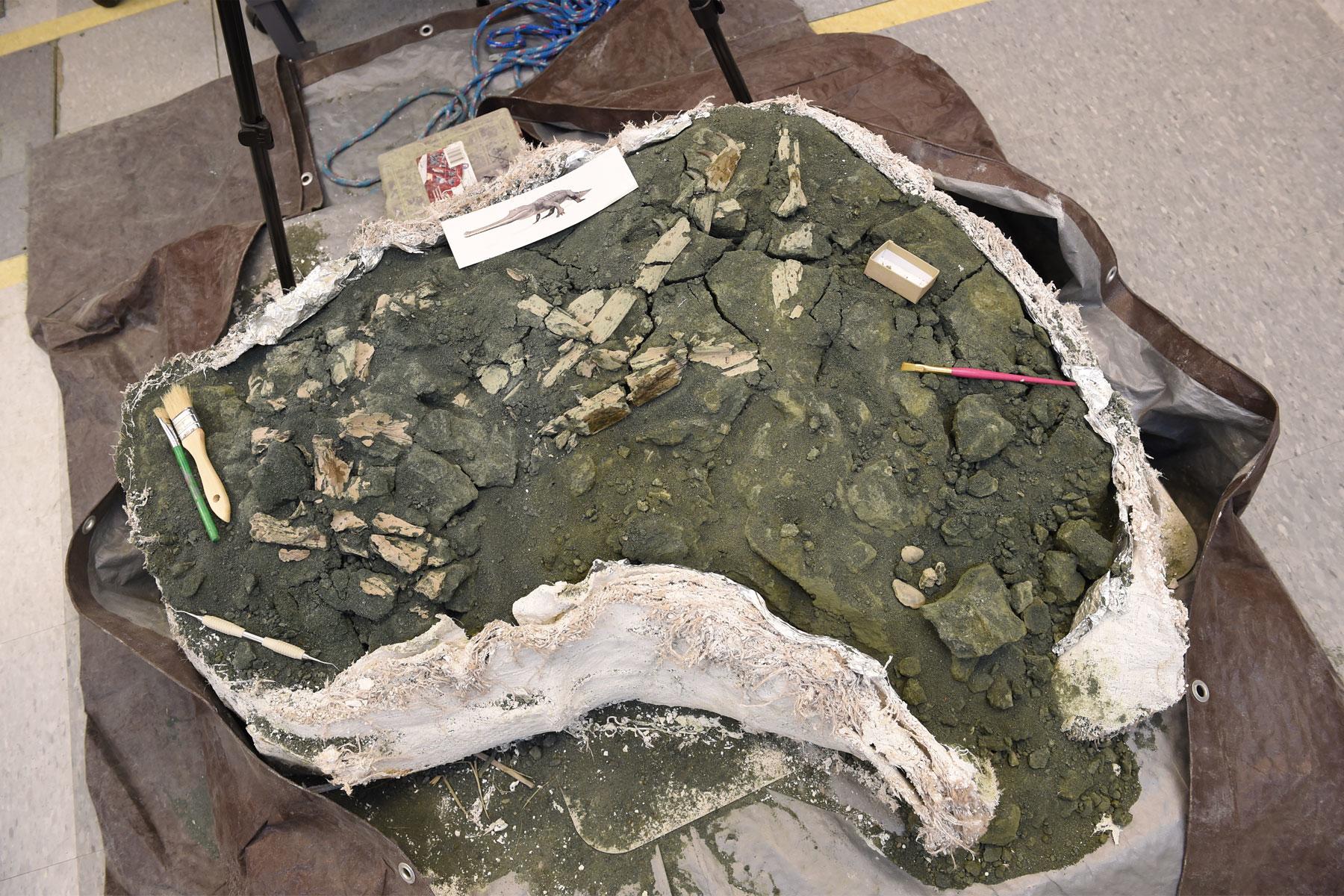 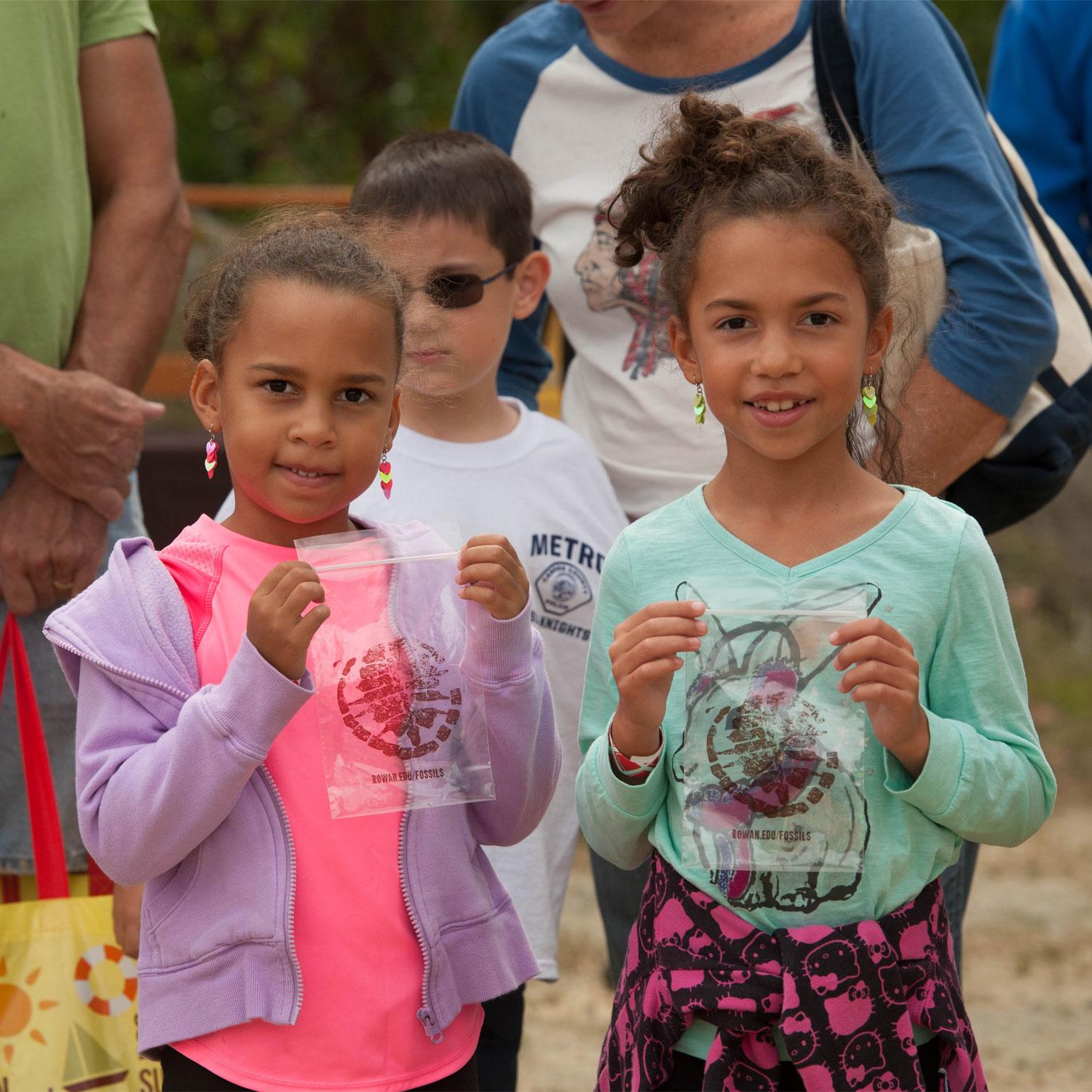 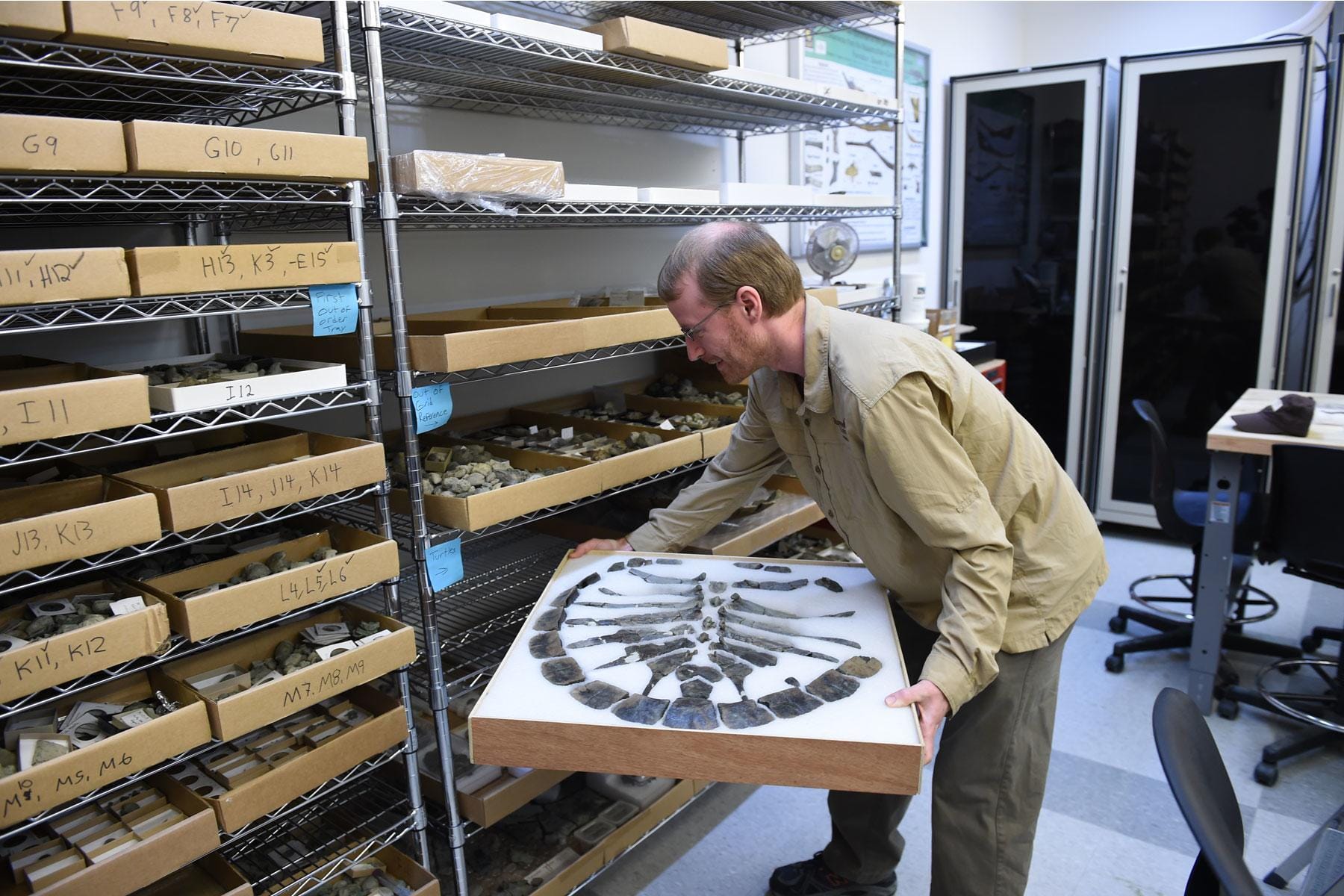 As tempting as the large piles of sand are, the best digging is near the stream that runs through the pit. The soft, wet earth yields sea turtle shells, clam, sponge, brachiopods, and even shark teeth fossils.

Other fossils from the site include marine crocodiles, sharks, and mosasaurs. Digs have also revealed plenty of the mineral vivianite, an iron ore that turns a bright blue when it oxidizes. Visitors are allowed to search nearly the entire site for fossils. Best of all, during the open dig days, you are allowed to keep anything you find. 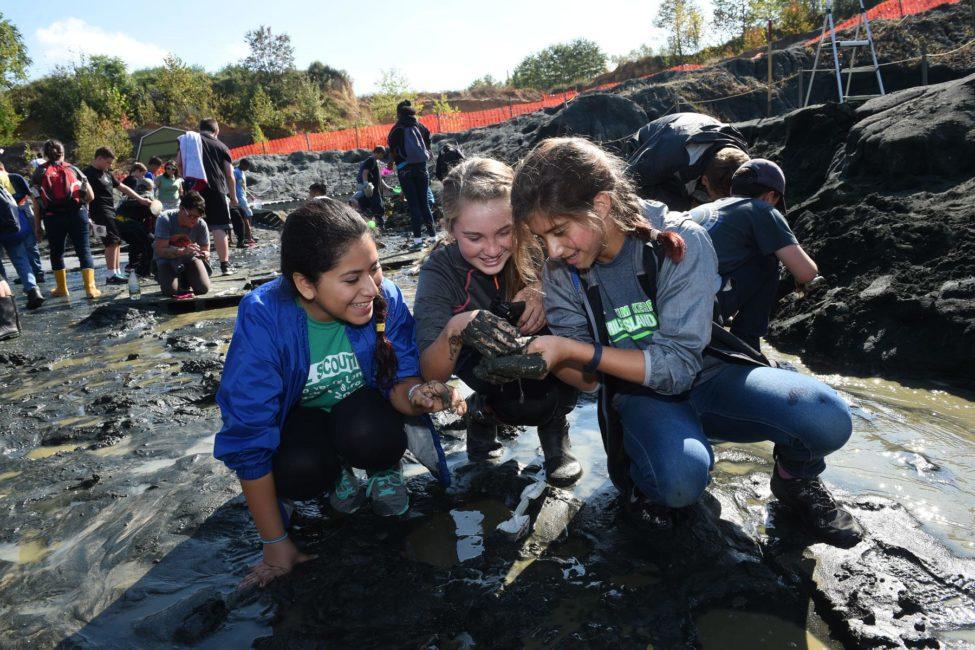 Current diggers at the park will have a rather realistic Indiana Jones experience, as the park is rugged and does not yet have permanent bathroom facilities. Directions to the park include a reminder to bring hand wipes, as the digging itself is muddy going. Wear boots or old sneakers, clothes appropriate for mud, and bug spray. Edelman Park also hosts a new summer program called GEO Explorers Summer Day Camp for 120 children ages 7-12. Click here for an application to the camp as well as dates for the next open dig days.

Edelman Park is undergoing some dramatic alterations and expansions. By 2020, the site will feature a museum, a visitor STEM Center, lab spaces for research, and the greatly-anticipated flush toilets. The goal will be to have the park open for 8-9 months of the year. But even with all of the modern features, the Edelman Park promises the allure of an ancient, mysterious, and buried past.