This soup is the delicious result of numerous cultures and chefs contributing their own variations to this signature Louisiana dish.

Louisiana’s signature stew-like soup reflects traditions spanning African, Native American, French, German, and other European cultures. Praised as “the crown of all the savory and remarkable soups in the world—a regular elixir of life” in 1850 by a Swedish writer, it comes in two main versions, both served over rice: seafood gumbo with shrimp, crab, and oysters; or chicken and andouille gumbo, with smoked pork cayenne-spiced sausage. But a third, green version—gumbo z’herbes (short for gumbo des herbes)—was made famous by Dooky Chase’s Restaurant in New Orleans, whose late chef and owner, Leah Chase, was called the “Queen of Creole Cuisine.” 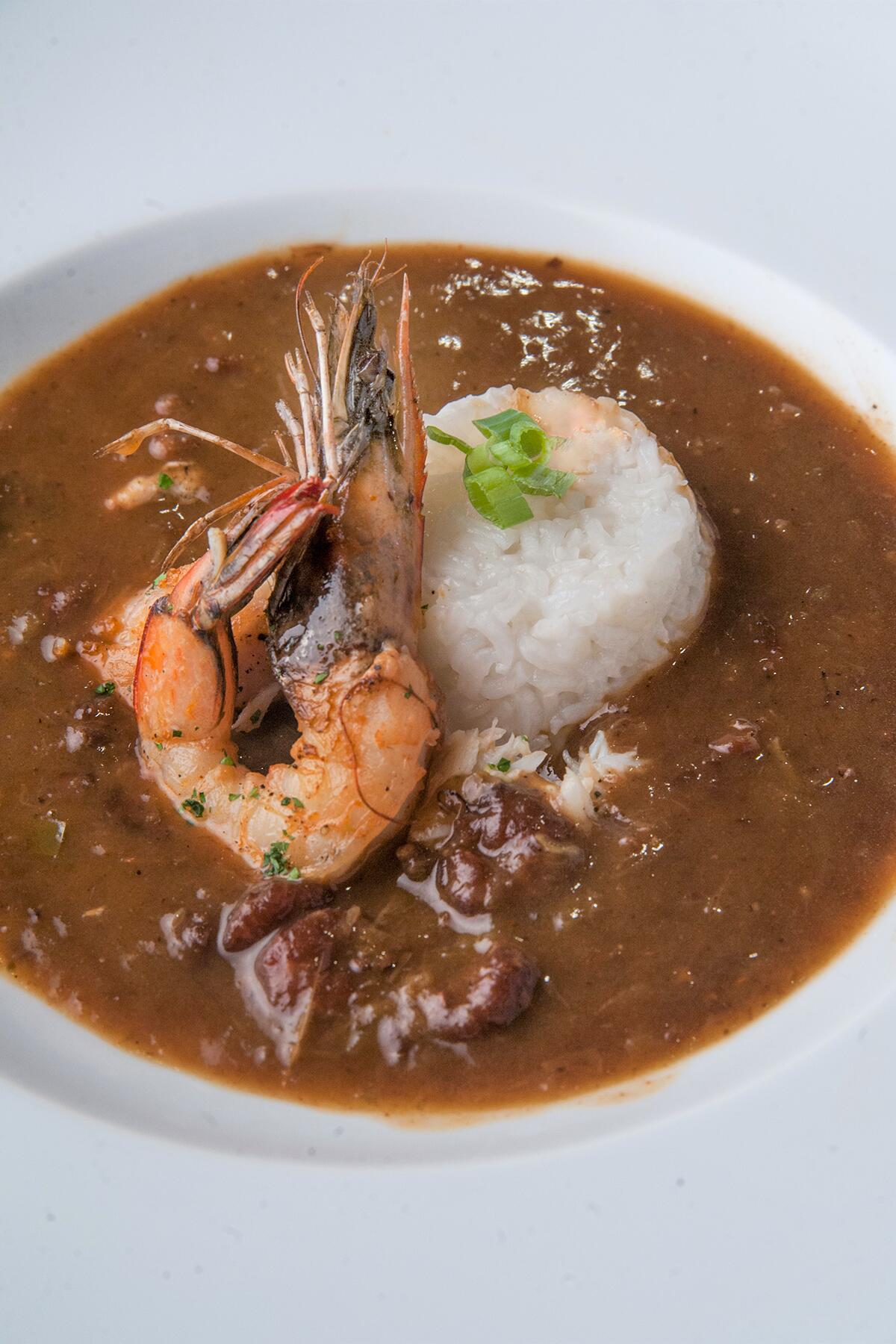 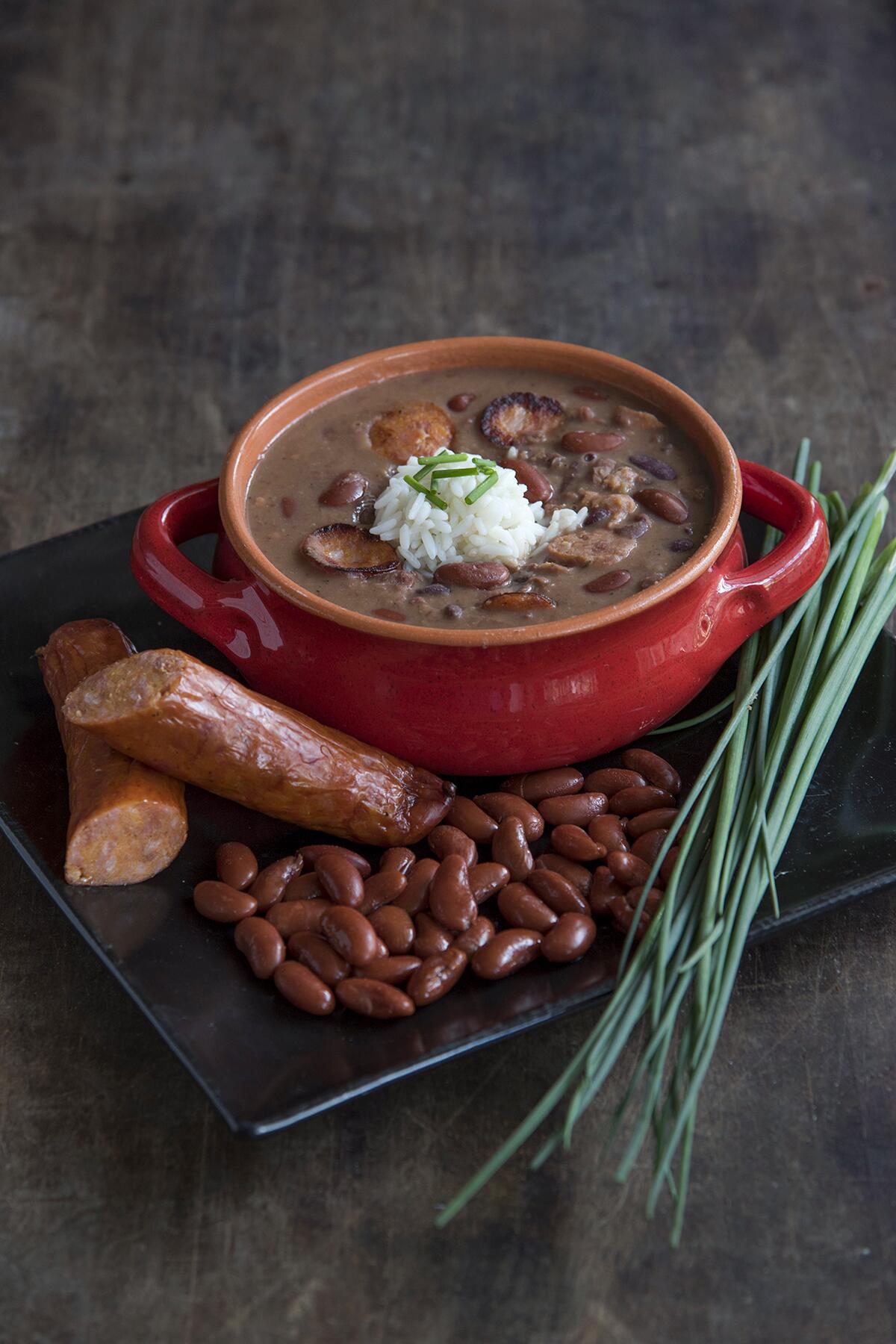 Gumbo is both a Cajun and Creole dish, beloved by both the descendants of Acadians forced to flee Nova Scotia in the 18th century, and the mixed-race descendants of Europeans and enslaved Africans. “Cajun cooking is a rustic style of cuisine based on country French cooking, which evolved around indigenous ingredients harvested from the land, swamps, bayous, and streams. Creole cuisine is more sophisticated, based on European techniques but greatly influenced by other cultures,” says chef John Folse, author of The Encyclopedia of Cajun & Creole Cuisine and co-owner of Restaurant R’evolution in New Orleans.

“Like white on rice, gumbo and Louisiana are inseparable.”

“Like white on rice, gumbo and Louisiana are inseparable,” says Louisiana Travel, the state tourism board. But its precise origin is murky. Traditionally made with a roux, a French technique that cooks flour and oil until they turn brown (often chocolate brown), it’s thickened with either okra, popular in Africa, or filé powder (ground sassafras leaves), a Native American contribution. In fact, “gumbo” is derived from the word for okra in West African languages, ki ngombo. But kombo is the Choctaw word for sassafras.

History Sarah Holt Why Is There a Mile-Long Banquet Table in This European City?
Continue Reading Article After Our Video

“In Louisiana there are as many variations of gumbo as there are cooks in the kitchen,” due to settlers’ nationalities and regional ingredients, says Folse, who identified 10 regional gumbo styles, from north to south. Tomatoes, crawfish, beans, peas, or even potato salad may be added. It’s a synonym for a potpourri: Ken Burns even named the first episode of his documentary on jazz, Gumbo: The Beginnings.

Some think gumbo is related to bouillabaisse, the French seafood stew. But purists vehemently disagree. For one thing, the classic bouillabaisse, from Marseille in Provence in southern France, uses several different types of fish, added to a broth accented with saffron and fennel. But fish has never been a gumbo ingredient. Also, it’s believed that over half the Acadians who settled in south Louisiana were from Normandy and Brittany in northern France. An emphasis on a French origin disrespects the strong influence of African foodways on Louisiana’s food, many food experts think.

Gumbo z’herbes reflects the influence of Germans, who brought their custom of serving a dish of seven different greens, or a soup of seven herbs, on Holy Thursday (the Thursday before Easter) for health and good luck. Germans emigrated by the thousands from the 1720s on to the “river parishes” upriver from New Orleans, like St. James (where Folse’s ancestor, John Jacob Foltz, settled), St. Charles, and St. John the Baptist. A town, Des Allemands (French for “the Germans”), remains in St. Charles Parish today. 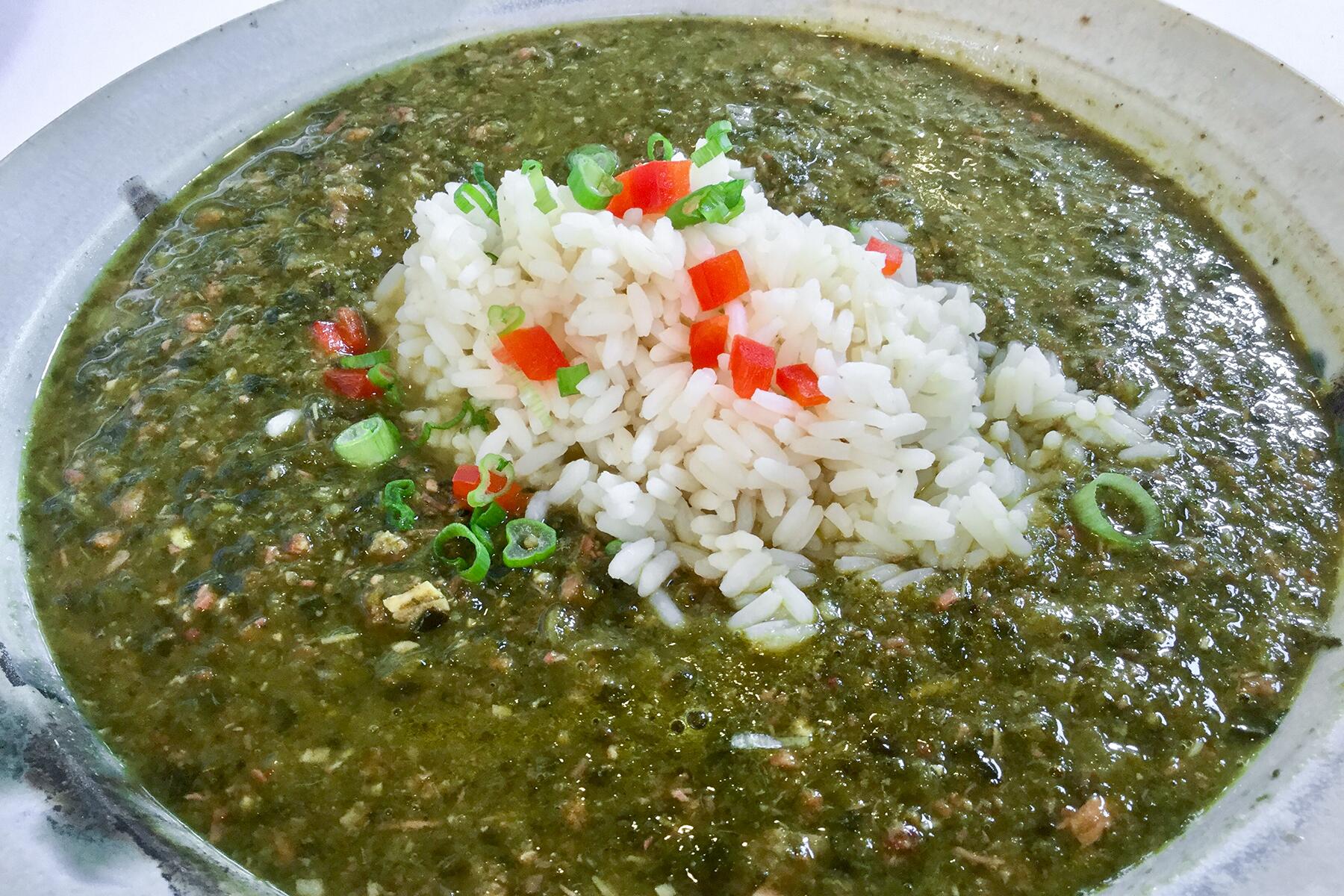 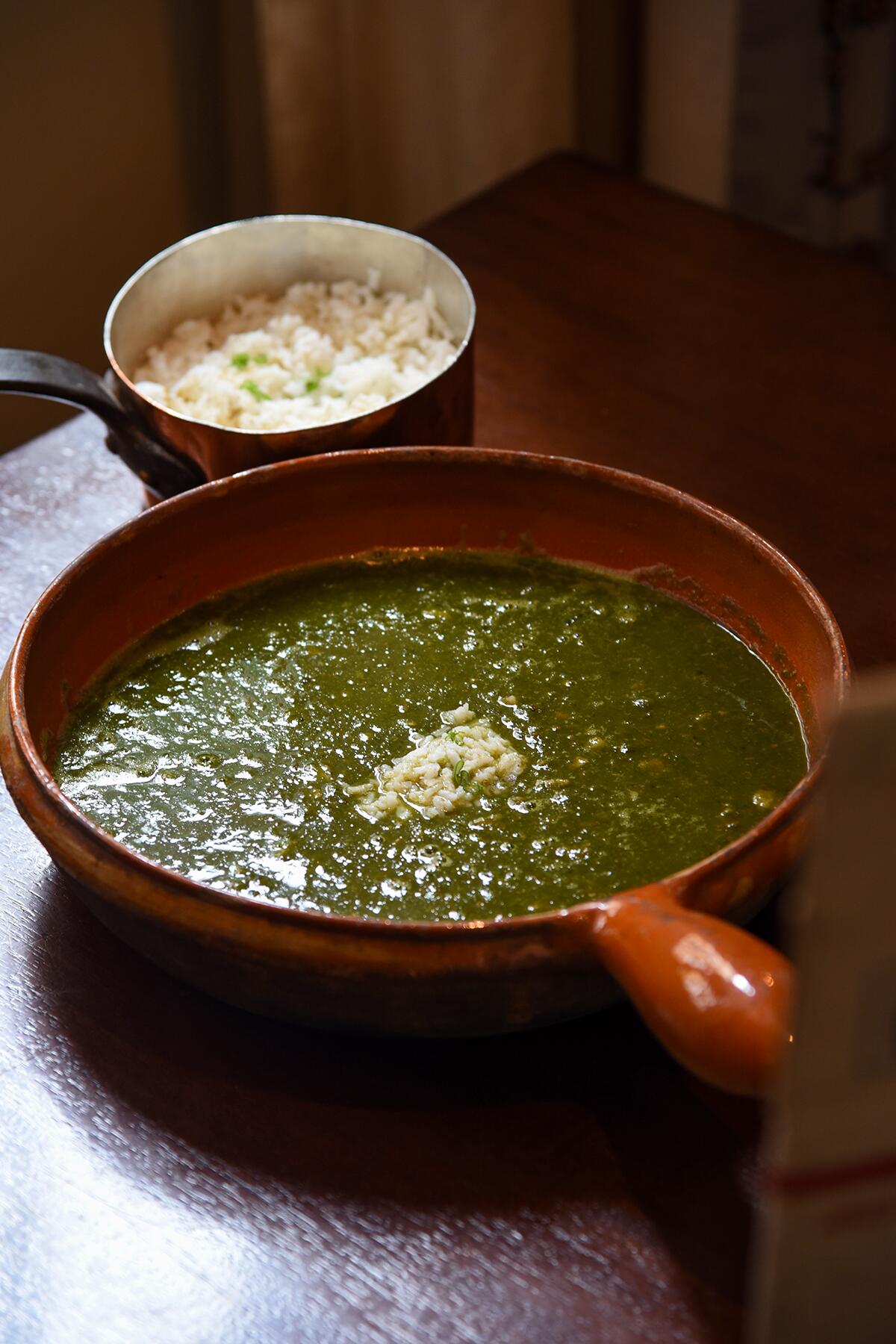 But in Louisiana, it shifted into a dish vegetarians wouldn’t recognize. Gumbo z’herbes is packed with nine greens, from collards, spinach, mustard greens, cabbage to watercress, plus (surprise!) chicken, two types of sausage (smoked and chaurice, a spicy pork sausage seasoned with scallions, parsley, and onions), ham hock, and veal, in a roux spiced with file and cayenne at Dooky Chase’s (you can find the recipe here).

“There’s a lot of protein to gear up for the fast on Good Friday,” says Edgar Chase IV, Dooky Chase’s executive chef, and Leah’s grandson. “We serve it just once a year.”

Chase says that his grandparents passed down a superstition about the origins of the nine greens in gumbo z’herbes. “Nine is the amount of new friends you’ll make and one will be wealthy. It’s supposed to be an odd number of greens; we’ve also done it with 11 or seven.”

Folse adds, “Leah would tell the story that even though it’s green gumbo, Louisiana has so much access to game and other meats that fit a heartier version, and one that stretches the table for big families. ‘There’s never too much meat for a green gumbo,’ she’d say.”

Year-round, Chase also serves a Creole gumbo, made with chicken, crab, shrimp, veal, ham hock, smoked sausage and chaurice, oyster liquid, and a roux spiked with filé. An okra seafood gumbo, featuring shrimp, crab, oyster liquid, and tomato paste, instead of a roux, is served on Friday. “That’s the beauty of gumbo, it’s so versatile and flexible. You can do duck or turkey gumbo, everyone does a different type of gumbo,” says Chase, whose grandmother, named a James Beard Lifetime Achievement Award winner in 2016, died in 2019. Her children, Edgar III and Stella, now own the restaurant, which opened in 1941.

Twists on gumbo abound. Death by Gumbo (roast quail stuffed with oysters, arugula, rice, and filé) is on the menu at Restaurant R’evolution, a variation of the dish Folse first prepared for The New York Times restaurant critic Craig Claiborne, who wrote a story on how Cajun and Creole cuisine was changing, at his home back in 1987.

Agnolotti stuffed with a gumbo z’herbes filling (collard and turnip greens braised with pork plus cream cheese spiced with Tabasco and harissa) in broth, topped with Parmesan, is served at The Chloe, a new boutique hotel in New Orleans’ Garden District. “The greens make such a flavorful pasta filling. People don’t expect it, some say it’s the best dish they ever had. It’s like pasta en brodo,” says Todd Pulsinelli, chef at The Chloe, which opened in late 2020.

In fact, gumbo is so popular among Cajuns, an unusual Mardi Gras custom is built around it in rural Cajun country. Nicknamed the “chicken run,” Le Courir de Mardi Gras in small towns like Mamou, about three hours west of New Orleans, is so different from the New Orleans festival, it’s like another planet.

Men in rustic long-sleeved, long-pants fringed outfits, homemade masks, and conical, dunce-like caps ride on horseback from farm to farm to beg for gumbo ingredients and chase chickens. The outfits resemble pajamas more than the opulent costumes and ornate floats in the big-city Mardi Gras. It’s a rollicking game whose players, often pickled in alcohol, roll around on the ground in hot pursuit of a chicken, given to a purple-caped, flag-waving captain when caught, sing and dance for bystanders, and even sway and dance atop their horses.

A haunting gumbo-begging song in Cajun French, La Danse (or Le Chanson) de Mardi Gras, accompanies the high jinks. Translated into English, one lyric, referring to the communal chicken and andouille gumbo the town feasts on after the riders enter town, goes:

Let’s go to our neighbors asking for charity,

From everyone who’ll come join us later,

Everyone who’ll cook the gumbo tonight.”

Its words are a recent addition, only about a century old, but the melody is believed to be much older, akin to centuries-old tunes from Brittany, France, one history says.

A delightful way to taste your way through history is found at gumbo festivals, known for their cooking contests, held mainly when cold weather approaches. In New Orleans, the Treme Creole Gumbo Festival is in November, held by the New Orleans Jazz & Heritage Foundation, which sponsors Jazz Fest each year. Honored as the “gumbo capital of the world” by state lawmakers, Bridge City, in Jefferson Parish near New Orleans, held a drive-through version of its long-running extravaganza, which cooks 2,000 gallons of gumbo, last year. Chackbay; in Cajun bayou country in Lafourche Parish, has held its Louisiana Gumbo Festival for 49 years.