Love is in the air for these wild animal parents at Disney World and you can meet their cute babies on your next visit.

As tends to happen when you get 5,000 animals together in one place, there have been more than a few (animal) love connections at Walt Disney World over the years.

In fact, there have been over 1,000 animal births at Disney World in the past five years and most of them were very carefully planned by Disney’s Animals, Science, and Environment team. It may not sound quite as romantic as two gazelles locking eyes at sunset and sauntering off to a romantic spot behind the tall wild grasses of Animal Kingdom’s Kilimanjaro Safaris, but there’s actually a very important reason these births don’t often happen by accident.

For years, Disney has participated in the Species Survival Plan (SSP), overseen by the Association of Zoos and Aquariums (AZA). This program helps Disney determine which animal species to breed and when to do it to ensure threatened and endangered species continue to flourish.

Though the goal is species survival, that doesn’t mean there isn’t a little flirtation involved. Disney’s animal care team works tirelessly to set up blind dates and romantic encounters to make sure these love connections go off without a hitch. A few of these courtships were documented for the Disney+ show Magic of Disney’s Animal Kingdom, and you can actually see many of Disney’s adorable animal babies (and their parents) on your next visit to the Orlando, Florida theme park.

On the sprawling African savannas of Animal Kingdom’s 110-acre Kilimanjaro Safaris attraction, a yet-to-be-named female Masai giraffe was born to mom Mara and dad George on September 22. Turns out, George is a stud in every sense of the word. He is often used for breeding at the park and gets carted around in his own personal trailer to fulfill his fatherly duties. Mom and her six-foot-tall baby will spend a few weeks bonding backstage before they join the rest of the herd on the savanna. This was the 35th giraffe born at Animal Kingdom and the 36th was born shortly after on October 20. 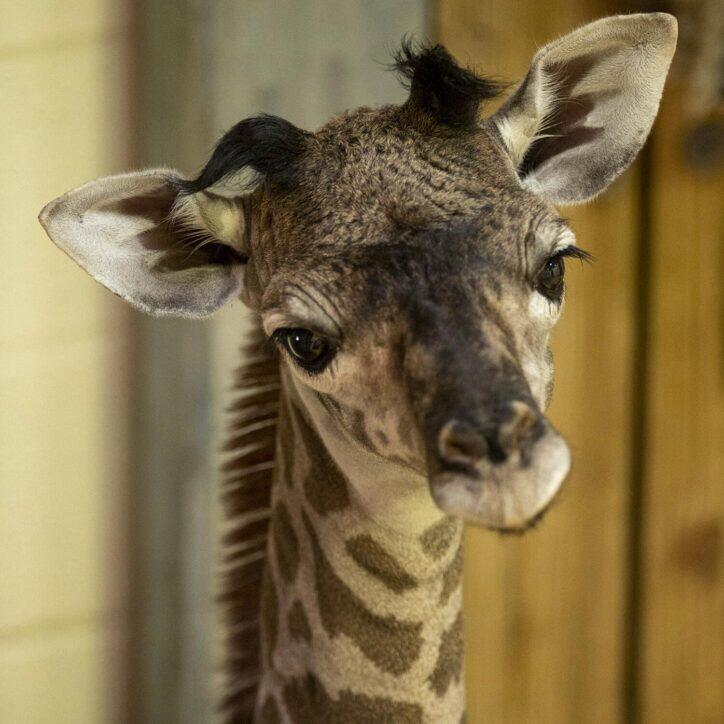 Elsewhere on the Kilimanjaro Safaris savanna, a baby mandrill named Olive was born to mom Scarlett and dad Linus on July 25. Speaking of Linus, episode four of Magic of Disney’s Animal Kingdom follows his introduction to an all-female troop of mandrills who was prone to family squabbles. In the wild, a dominant male typically leads the group to diffuse tension and, well, provide babies. Linus seems to have made himself right at home because not long after joining the troop, Scarlett was pregnant. Due to deforestation and poaching, mandrill numbers in the African rainforests are declining so baby Olive’s birth through the SSP is a huge win for Disney and the mandrills.

One of the newest animals to join the Disney family is a male white rhino born to mom Kendi and dad Dugan on October 25. Kendi and baby are currently bonding backstage, but guests should be able to see them on the savanna soon. Two other rhinos in the crash are also pregnant, and Dugan, the hunky bull of the group, was chosen to father all three calves to help bolster the world’s dwindling white rhino population. 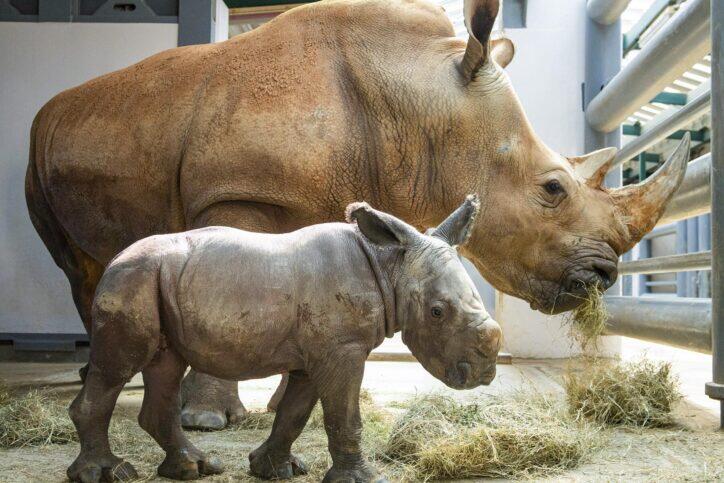 In The Oasis section of Animal Kingdom, Disney welcomed its first-ever babirusa piglet back in May of this year. Part of the hog family, the baby girl’s name is Kirana, which translates to “Sunbeam” in Indonesian. As shown in episode three of Magic of Disney’s Animal Kingdom, parents Betty and Mentari were set up on a blind date of sorts by the animal care team and they hit it off almost immediately. The pair first interacted through a window in Mentari’s stall door, and when Kirana reached the optimal time in her cycle for conception, the two had a date night in their natural outdoor habitat to help further their relationship and encourage breeding.

Though most animal babies who call Animal Kingdom home can be viewed daily, there are a couple of recent additions over at Conservation Station at Rafiki’s Planet Watch who are brought out only occasionally–a truly magical moment for guests who happen to be in the right place at the right time.

The result of a very successful blind date, Disney’s first baby aardvark, a girl named Karanga, was born to mom Peanut (Karanga means “Peanut” in Swahili) and dad Willie in early October. To prepare for her date, Peanut was treated to a luxurious pampering session where she was bathed, scrubbed, and primped before her big date. Possibly more important than Peanut’s spa day was the full physical exam she was given as part of the SSP to make sure she was healthy enough for breeding. The animal care team brought Peanut over to Willie’s habitat and, well, the rest is history. Karanga is currently backstage with her mom at the Conservation Station. She should start making appearances soon, or you can catch her parents’ love story in episode five of the show.

Born in February of this year, female prehensile-tailed porcupine Shelley also makes occasional appearances at the Conservation Station. The porcupette (the term for a baby porcupine) weighed less than a pound at birth and was covered in a coat of fine red hair. Her tiny quills were hiding underneath and will continue to grow and harden as she ages. Shelley’s mom Peri has proven to be quite maternal, which is part of why she was selected to breed through the SSP. In episode six of the Disney+ show, you can see how the animal care team gives Peri an ultrasound (our guess–very carefully!) and get a first look at baby Shelley just hours after her birth. 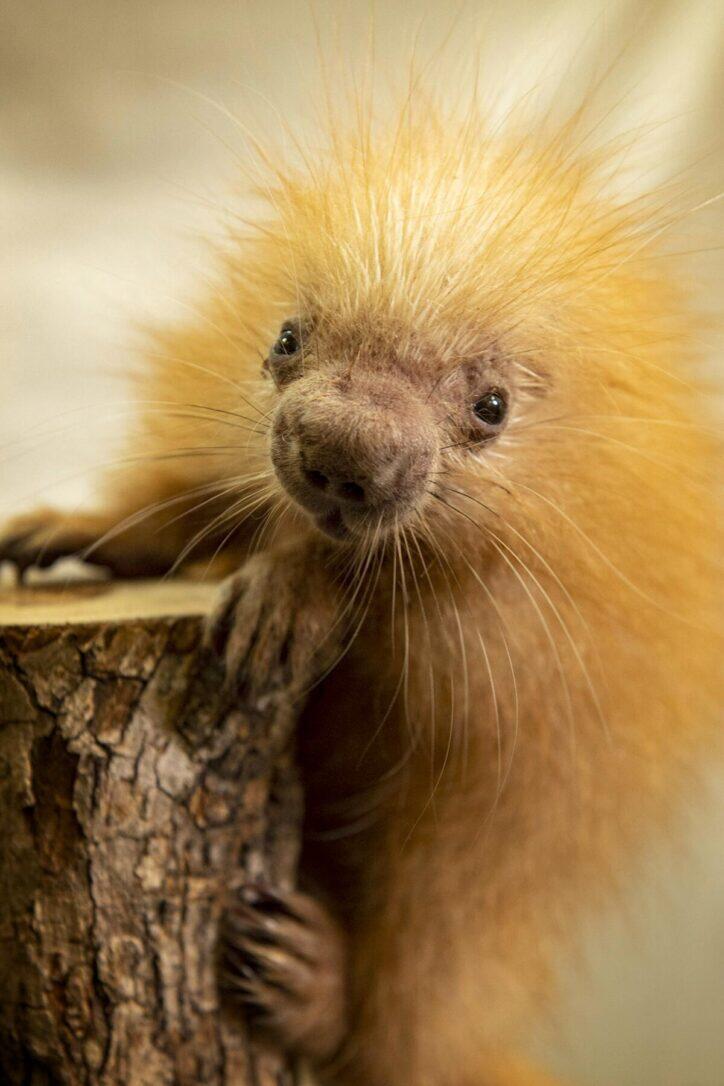 If you can’t get enough animal cuteness, you can binge Magic of Disney’s Animal Kingdom on Disney+ or follow along with Dr. Mark Penning, Disney’s Vice President of Animals, Science, and Environment, on Instagram to get your fix. And next time you’re at Disney World, be sure to ask one of the friendly animal caretakers where to look for these adorable bouncing babies.