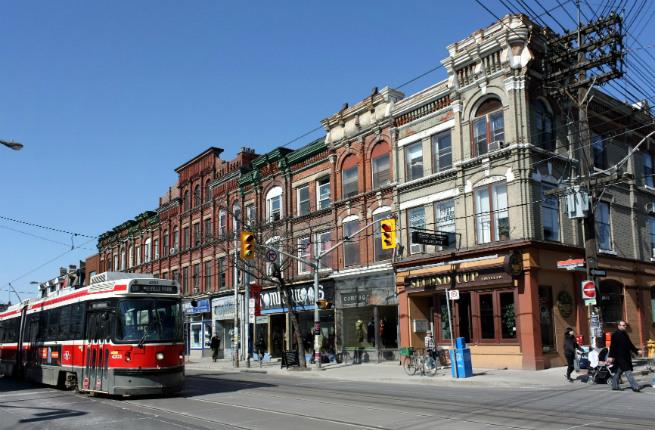 Not only is friendly, funky Toronto Canada's most populous city, but it's also one of the most multicultural municipalities in the world—and that translates to great eating. The variety of restaurants is mind-blowing: Vietnamese joints sidle up to new-school seasonal places, which sit across the street from Greek tavernas or Spanish tapas bars. The best part is that exploring this vibrant food scene merely requires picking a street in a lively area and going for a stroll. But if you'd rather narrow down the selection a bit, here are some ways to satisfy any appetite. 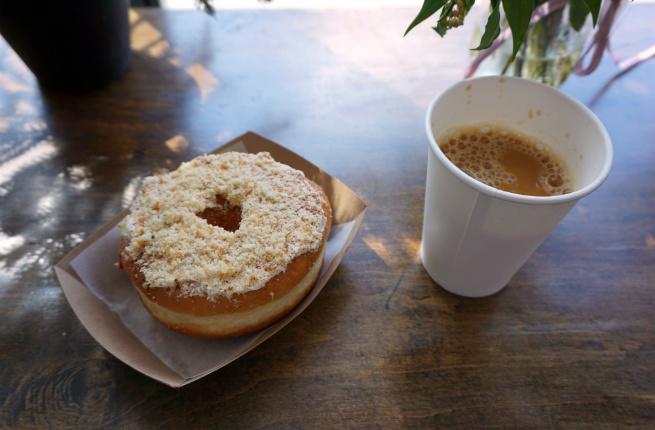 A Foodies on Foot tour-de-deliciousness is a great introduction to Toronto's restaurants and neighborhoods. Itineraries include Best of Toronto and the sandwich-focused Insanewich! tour. If you sign up for the fun 501 Streetcar Food Tour, which hops on and off along the 501 Queen line, you'll start by hitting an excellent doughnut shop in Parkdale, all the way west, and move on through banh mi, barbecue, and more.

If you'd rather indulge in some self-guided exploration, choose a vibrant, diverse street like Ossington Avenue, which runs from west Queen West up through Little Portugal. Graze through the offerings there, grabbing a Portuguese pastel de nata (custard tart) at Venezia Bakery, a Malaysian roti at Soos, and chili-soy chicken wings at Hawker Bar. Finish up with a pint on Bellwoods Brewery's sidewalk patio. 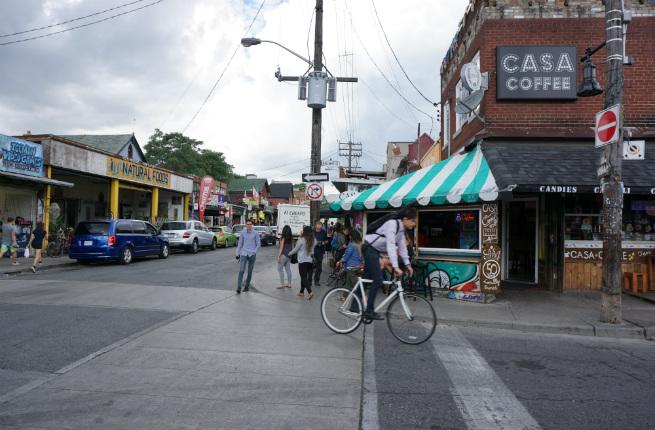 Built as a sort of early supermarket in the nineteenth century, St. Lawrence Market still houses more than 120 vendors selling everything from meat to produce to cheese. There are also some good options for a bite, including Carousel Bakery, famous for its peameal bacon sandwich, which some say is Toronto's signature dish. It's thick-cut Canadian bacon on a Kaiser roll that you slather with mustard—basic, but tasty. Follow the crowds to Buster's Sea Cove, where seafood like calamari, grilled fish, and fish and chips has made this place so popular that it now has a spinoff food truck. There's seating, though you might have to elbow someone out of the way to secure a table. Or pick up provisions here and bring them on the ferry to one of Toronto's charming islands.

Less of a traditional market than a condensed neighborhood spread over several square blocks, Kensington Market is an appealingly scruffy hodgepodge of everything from juice stands to bagel stores to grilled-cheese shops, with an emphasis on the crunchy-granola end of things. Have a wander and see what appeals to you or brave the lines at Rasta Pasta on Kensington Street, a Jamaican-Italian mash-up serving rightfully famous jerk chicken served with coleslaw or in a Panini.

For an international street-food smorgasbord, hit up Market 707 for everything from West Indian roti to barbecue to sushi sold out of shipping containers that have been converted into food stands. You'll also find crepes, cookies, and Filipino fare.

It's not exactly a market, but the Distillery District is a historic area of brick industrial buildings that's home to shops, restaurants, and a brewery, Mill St. Brewpub. If you're in the area and hungry, you can nosh on bar food (sliders, wings, poutine) here or hit the sprawling, colorfully decorated patio at El Catrin for tasty margaritas and fish tacos. 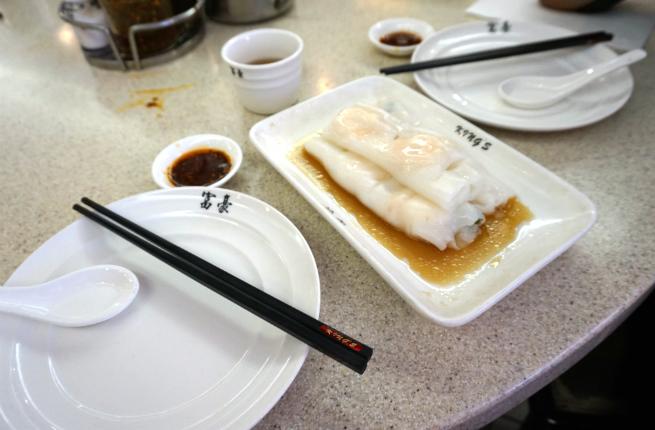 Like any big city, Toronto has its share of buzzy restaurants. Bar Raval, the smaller sister restaurant to hit Spanish joint Bar Isabel, opened earlier this year. The best time to go might be breakfast or lunch, when it's less crowded and you can really take in the gorgeous, sculptural wooden interior (there's patio seating for warm months as well). During the day, the selection of tapas and pintxos (mini bites) is displayed on the bar, enabling easy selection of doughnuts, cheeses, cured meats, high-quality canned Spanish seafood, and more.

Two other notable stops are on the same block: DaiLo, which serves eclectic new-school Asian food in a beautiful dining room with jade booths, bamboo screens, and painted walls a la vintage Shanghai; and taco joint La Carnita, where a line is apt to form before the spot opens at 5 p.m.

Multiculturalism always breeds hybrids, and popular Patois is a case in point. The Jamaican-Chinese menu is beloved for dishes like pierogi-style kimchi potstickers and jerk chicken chow mein.

Down the street is the Black Hoof, which kick-started the city's charcuterie craze when it opened in 2008. The narrow bar has a pared-down chalkboard menu with offal-heavy offerings like pig's ear slaw and tongue on brioche. 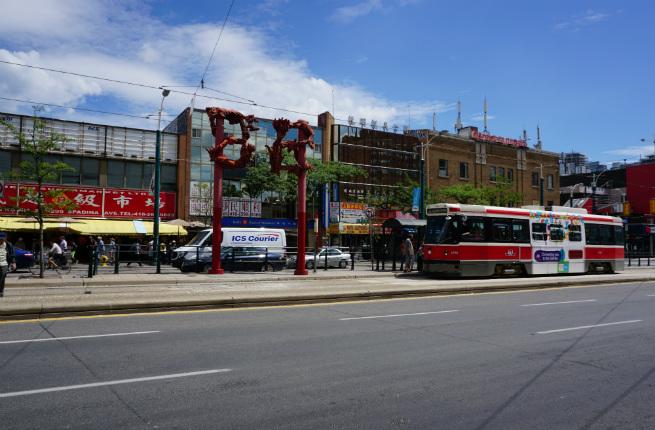 Be sure to stop by Chinatown, the main drag of which is Spadina Avenue roughly between Queen Street West and College Street. Don't miss beloved institution King's Noodle, where the roasted meat platter, shrimp dumplings, and wonton noodle soup are musts. For late-night chowing, hit Swatow (309 Spadina Ave.; 416-977-0601) across the street, where classics like chow mein and shrimp and lobster sauce on rice are the dishes to order. For a Vietnamese fix, Pho Hung is so good that two other branches have opened elsewhere in the city. 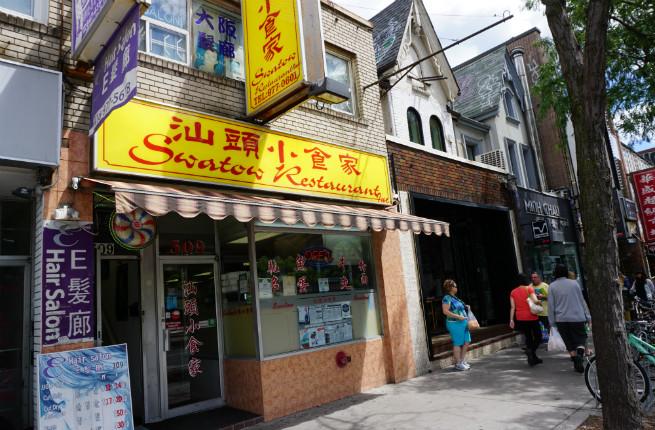 If you want to make an evening of good views, first hit daisho on the third floor of the Shangri-La Hotel, Toronto. An outpost of David Chang's New York-based momofuku empire, the restaurant offers creative spins on modern Asian grub—and beyond. The menu recently featured two decidedly non-Asian riffs on the famous momofuku pork bun: an “everything” bun stuffed with whitefish salad and a falafel bun filled with a chickpea patty and pickled vegetables, both delicious.

Cap off your evening with a drink on the rooftop lounge of the Thompson Toronto hotel (reservations recommended), which boasts some of the best views of the downtown skyline. At night the buildings are lighted in different colors—it's a spectacular sight.