New regulations seek to prevent any more drownings in the famous canals.

Xochimilco, a borough of Mexico City, is popular for its canals where groups of tourists hire the operators of flat-bottomed boats called trajineras and typically spend a few hours floating on the water, drinking, eating, and generally enjoying the party atmosphere.

But a recent incident has illustrated how, in the space of an instant, a lighthearted outing can take a tragic turn.

On September 1, 20-year-old José Manuel Romero Reyes was partying with friends and, while attempting to cross to another trajinera, lost his footing and fell into the canal. When he didn’t resurface the party came to a stop, but despite the efforts of the dozens of people on the trajineras searching the surrounding area, the murkiness of the water made it impossible for anyone to see where he was. It would take until the following morning for police to recover Reyes’ body.

According to Milenio, there have been five other drownings in the Xochimilco canals since 2005 (with one of the incidents being as recent as March of this year). Many of the other drownings involved alcohol and passengers attempting to climb from one trajinera to another. But it’s the fact that the tragedy from last Sunday was caught on camera in a widely circulated video that appears to have prompted officials to swiftly lay out much stricter regulations.

Passengers will no longer be allowed to hop between trajineras or play music from speakers, be required to be seated during the tours, and be limited to a one-liter bottle of hard liquor per boat or three beers per person.

As for the operators, they’ll be required to carry lifejackets (though passengers will have the option to opt out of wearing them if they sign a waiver) and be subject to drug testing. Vendors at the embarcaderos (where passengers can purchase food and drink before setting out on the canals) are already barred from selling “caguamas” (40-ounce beers or micheladas).

These changes started being enforced as early as last weekend, while the rest of the rules will roll out on September 15 and October 1.

The regulations on alcohol is a drastic change for the canals and trajineras, where a big part of the appeal is the freewheeling, casual atmosphere, and buying your next drink is as easy as flagging down a nearby vendor selling beers out of their boat. However, the combination of bodies of water and alcohol is a dangerous one. The CDC states that 70% of all incidents of drowning among adults and adolescents (in the U.S.) involve alcohol. 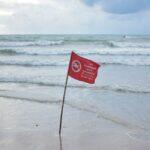 RELATED STORY
Why Do People Keep Drowning at These Popular Beaches?

According to the Associated Press, trajinera operators are in favor of putting regulations in place that would limit the disruptions caused by the rowdier passengers but say that a better solution would be an increased police presence on the canals.

So Should You Prepare for a Much More Sober Xochimilco Experience?

Whether or not these new rules will be effectively enforced remains to be seen. On September 6, according to the Associated Press, some passengers were unaware of the new rules, and no one was wearing life vests. But whether or not the rules are being enforced, it’s important to be safe and keep your wits about you. Don’t drink to excess or hop across trajineras for the fun of it. And if you don’t know how to swim you should probably opt for the life vests.