When the world went into lockdown, I was in paradise.

In early March, I flew from San Francisco to Guatemala to volunteer at a party hostel for what was supposed to be a month. I’d found it online, and the photos made it look like a traveler’s dream. COVID-19 was already wreaking havoc but had not yet reached a global scale. I naïvely assumed that coronavirus would hit like the other global health crises that have occurred in my lifetime. When SARS and Swine Flu took the world by storm in 2003 and 2009, people in many countries were still able to travel, many schools worldwide were still open, and one could still go to the grocery store without a sense of apocalyptic panic, so I thought I’d be able to go gallivanting in the jungle to my heart’s content and then, after that, see more of Central America.

Boy, was I wrong.

One thing I did successfully gauge was that the hostel was everything the photos cracked it up to be. I spent the afternoons making cocktails for guests at a swim-up bar in a pool overlooking a lush green valley and the nights meeting fun people from all over the world. On days off, we’d grab beers and inner tubes and head down to the river. The hostel was pretty much in the middle of nowhere—the bathroom showers overlooked the jungle. The soundtrack to my morning bathing routine was actual birds chirping. It was definitely a far cry from life in San Francisco and I was loving every second. 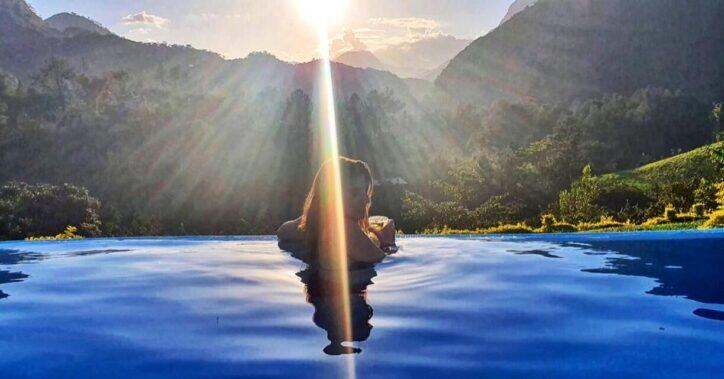 Meanwhile, my friends back home were sending me photos of grocery store shelves devoid of nearly everything, and my Facebook feed was filled with videos of people fighting over the last roll of toilet paper. This was my only indication that the world was very different than it had been when I left less than a week prior.

One week into my new life in jungle paradise, Guatemala reported its first case of COVID-19. A day later, there were six; that same day, Guatemalan president Alejandro Giammattei announced he was shutting the country’s borders. No buses, shuttles, or planes would be allowed in or out of the country for a 15-day period, and maybe longer if Guatemala continued to see more cases. All the hostel guests and my fellow volunteers had 24 hours to either get out of the country or be stuck there indefinitely. Giammattei also imposed a curfew which mandated that all restaurants and bars close by 5 p.m. People wouldn’t be allowed to leave their houses after that time, and the consumption of alcohol was no longer permitted after 5 p.m., as well. Talk about the opposite of “it’s 5 o’clock somewhere!”

The day after the shutdown and curfew were announced, 75% of our guests hopped on an early morning shuttle out of the country. The hostel management offered a cheaper nightly rate with meals included for the guests who wanted to stay. The remaining people—25 guests and four volunteers from eight different countries, and the local staff—had accepted our fate that we were trapped in the country.

My life while “trapped in Guatemala” was full of tropical drinks, inner tube races across the pool (since we couldn’t leave the hostel to go to the river), and waking up every morning to that idyllic jungle view. Volunteers got free accommodation and three meals a day, so I was quarantined with a pool, fun people, and free food. I was pretty sure I was one of the luckiest quarantined people on the planet. We did start needing to ration food, and one day, none of the food we ate was solid, but still, we had it pretty damn good.

I felt that being “stuck” in the jungle was the safest place I could possibly be while a deadly disease was ripping across the planet, especially in a country where the president closed the borders immediately. In stark contrast, the person in charge of running my home country was issuing troubling statements such as, “I’m not concerned at all. [COVID-19] will go away. Stay calm. It will go away.”

People wouldn’t be allowed to leave their houses after that time, and the consumption of alcohol was no longer permitted after 5 p.m., as well. Talk about the opposite of “it’s 5 o’clock somewhere!”

Sure, we couldn’t leave the hostel, but most of us wouldn’t have wanted to. Being in a jungle paradise with swimsuit-clad people in their 20s and 30s lounging by the pool all day as the speakers pumped house music through the jungle made it feel more like an MTV reality show than a lockdown during a pandemic.

The glamour of our situation was soon offset by the realities of COVID-19, no matter how stunning the views were. On Day 3, all the guests and volunteers were told by the hostel management that we had to hide in our rooms, because someone was coming to bring us more food supplies, and he was accompanied by local police officers. Apparently, many of the locals in town believed that foreigners (us) had brought the disease to the country, so it was best if they didn’t see us. “Hiding from the cops in my room” hadn’t necessarily been on my Central America itinerary, but I was quickly learning that I was not having the adventure I thought I’d be having. 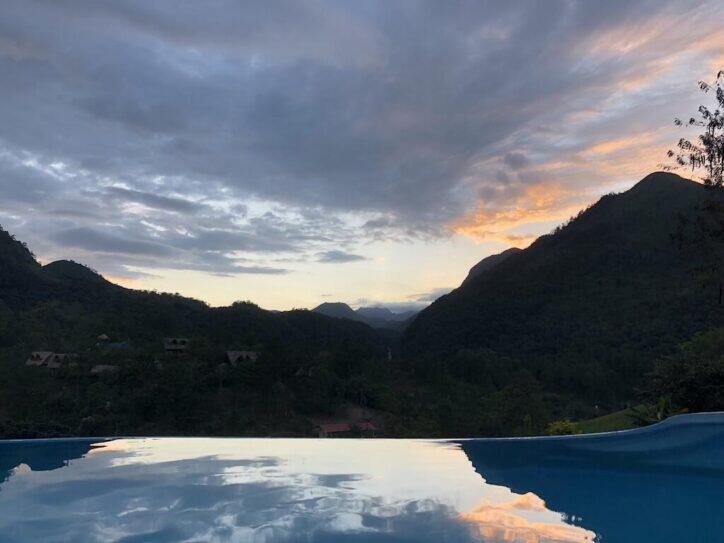 On Day 4, healthcare officials in town started coming to our hostel daily to check everyone’s temperatures. Throughout the whole time we were quarantined, there continued to be no cases at our hostel, nobody was exhibiting any symptoms, and nobody had a fever—but we still got checked every day.

Honestly, I understood the locals’ concern. They saw us drinking and partying by the pool while the country was in lockdown, so I understood how it could look bad. No matter where you are, being quarantined far away from home can be scary. New friends were helping the situation be less frightening and more fun while keeping us sane.

The Guatemalan staff were offering Spanish lessons to guests, some people were doing yoga together every morning, and we started doing group workouts. In lieu of drinking at night, we’d play card games or watch a movie together. The kitchen staff started offering “family dinners” where we’d all sit down and enjoy the same meal at the same time. And honestly, it started to feel like we were a big family from eight different countries brought together in paradise during a worldwide health crisis. We all were laboring under the collective delusion that we’d be able to “ride out” the coronavirus outbreak in the jungle in our little community, poolside piña coladas in hand.

On March 24, our quaran-dream ended as suddenly as it had started. Twenty-five guests were not enough to keep the hostel running. Continuing to keep the pool running was costing them a lot of money. It was no longer feasible for them to stay open, at least for the time being. The rest of us either took an embassy-sponsored shuttle to Mexico (whose borders were still open) or flew home immediately. I reluctantly opted for the latter.

Before leaving the U.S., I had been living in and working for another hostel in San Francisco. On the same day we got the news about our jungle paradise shutting down, I was informed that the hostel in San Francisco was closing to guests for now, so I was worried that I wouldn’t have anywhere to stay when I got back.

Everyone heading back to their home countries from elsewhere is required to do a two-week self-quarantine period, and my former boss in San Francisco thankfully allowed me to quarantine in an empty hostel dorm.

Because La Aurora International Airport in Guatemala City had been shut for a week already, the U.S. State Department arranged a few rescue flights for American citizens, the last of which were that week. I waited in line for three hours just to get into the airport, since each person was having their temperature checked before being allowed inside. The flight was delayed three additional hours. Twenty hours and a layover later, I landed at San Francisco International Airport, which was the most deserted airport I’d ever seen.

Instead of embarking on the rest of my Central American adventure, I’m back in San Francisco in a room with eight vacant bunk beds, watching the typically busy streets outside the window remain empty except for the occasional masked afternoon stroller. As the number of COVID-19 cases in the U.S. climbs daily, I drink wine, call my friends on Zoom, and pretend I’m still in the jungle.