The Cayes and Atolls

The Cayes and Atolls
TRAVEL GUIDE 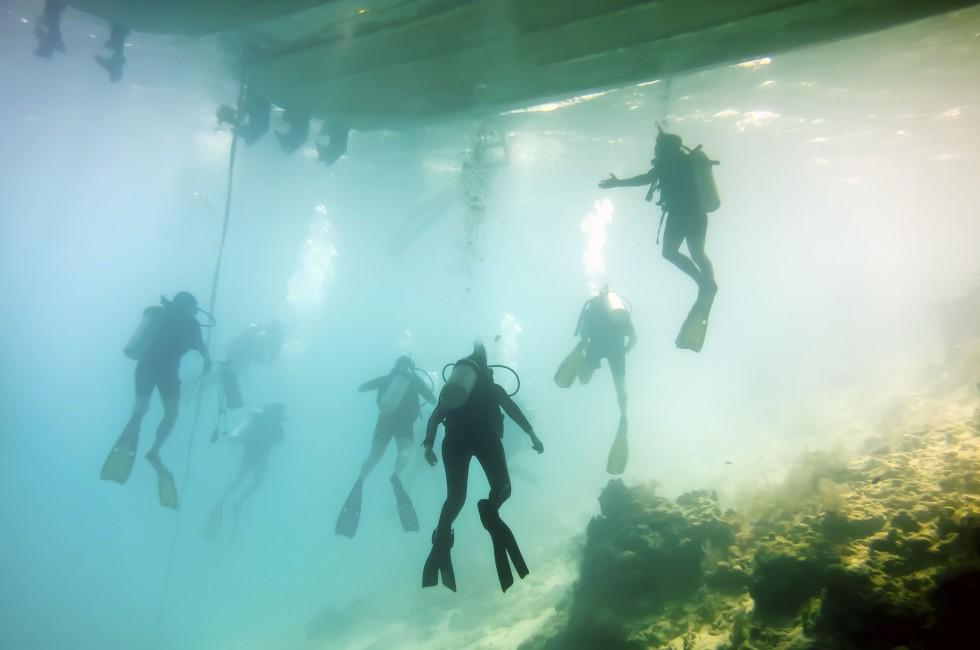 Imagine heading back to shore after a day of snorkeling, the white prow of your boat pointing toward billowing clouds, the sky's base darkening to deep lilac, spray from the green water like warm rain. To the left, San Pedro's pastel buildings huddle among the palm trees like a detail from a Paul Klee canvas. To the right, the surf breaks in a white seam along the reef.

You can experience such adventures off the coast of Belize, where more than 400 cayes dot the Caribbean Sea like punctuation marks in a long, liquid sentence. A caye, sometimes spelled "cay" but in either case pronounced "key," is simply an island. It can be a small spit of sand, a tangled watery web of mangroves, or, as in the case of Ambergris Caye, a 25-mile-long (41-km-long) island about half the size of Barbados. (Ambergris is locally pronounced Am-BUR-griss.)

Besides being Belize's largest island, Ambergris Caye is also Belize's top visitor destination. Around half of all visitors to Belize make at least a stop at Ambergris, and many visit only this island.

Ambergris Caye is easy to get to from Belize City by water taxi or a quick commuter flight. It has the largest concentration of hotels, from budget to the ultradeluxe, and the most (and some of the best) restaurants in Belize. Although the island's beaches may not compare to classically beautiful sands of the Yucatán or the main Caribbean, Ambergris has miles and miles of beachfront on the east or Caribbean side, and the amazing Belize Barrier Reef is just a few hundred yards offshore.

San Pedro, the only real town on Ambergris Caye and growing in renown, is a place of paradox. It's mostly laid-back and low-rise, but traffic increases every day. It's traditionally a fishing town but now has resorts with ionic columns and combed sands. Rum is cheap but a taco salad can cost US$19. And a zinc-roof shack sits two doors down from a terra-cotta palace. These juxtapositions are what makes San Pedro a complicated product of modern economics; however, it remains a charming destination. In spite of the growth in tourism, most San Pedranos are authentically friendly and welcoming to visitors. Most main streets have concrete cobblestones, but side streets are hard-packed sand. Golf carts are still the prevalent vehicle, although the number of cars on the island continues to rise, and downtown the traffic on the narrow streets can be dangerous to pedestrians.

Since the paving of its single road, or "golf cart path," was completed in 2016, North Ambergris (above the Boca del Rio bridge) is more accessible and less remote than ever. A celebrated boost in infrastructure, the road means developers can almost be heard shouting "Land ho!" as they envision the area's potential. Currently, this 12-mile stretch has some of the most glamorous resorts in the country.

Caye Caulker is Ambergris Caye's sister island—smaller, less developed, and much cheaper. Caulker, whose name derives from the Spanish word for coco plum, hicaco, has the kind of sandy-street, no-rush, low-key Caribbean charm that some travelers pay thousands to experience. Here it can be had almost for peanuts. Less than 10 miles (16 km)—about 30 minutes by boat—from San Pedro, Caye Caulker, sometimes called Caye Corker, is definitely worth a day visit, and in our opinion, worth a week.

Most of Belize's cayes are inside the Barrier Reef, which allowed them to develop undisturbed by tides and winds that would otherwise have swept them away. The vast majority of them are uninhabited but for pelicans, brown- and red-footed boobies, and some creatures curiously named wish-willies (a kind of iguana). Island names are evocative and often humorous: Wee Caye, Laughing Bird Caye, and—why ask why?—Bread and Butter Caye. Names can suggest the company you should expect: Mosquito Caye, Sandfly Caye, and Crawl Caye, which is supposedly infested with boa constrictors. Several, like Cockney Range or Baker's Rendezvous, simply express the whimsy or nostalgia of early British settlers.

Some cayes have a population of one or two dozen, but also have exclusive villas and glamorous resorts. Cayo Espanto and Caye Chapel are slated for Four Seasons developments, among the first hotel chains in Belize.

Farther out to sea, between 30 miles and 45 miles (48 km and 74 km) off the coast, are Belize's atolls, Glovers (or Glover's), Lighthouse, and Turneffe, impossibly beautiful when viewed from the air. There are only four true Pacific-style atolls in the Americas, and Belize has three of them (the fourth is Chinchorro, off Mexico). At their center the water is mint green: the white sandy bottom reflects the light upward and is flecked with patches of mangrove and rust-color sediment. Around the atoll's fringe the surf breaks in a white circle before the color changes abruptly to ultramarine as the water plunges to 3,000 feet. 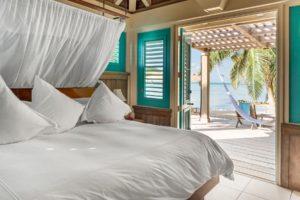 Recommended Things to Do in The Cayes and AtollsSEE ALL

Find the perfect tours and activities in The Cayes and Atolls.

Recommended Hotels in The Cayes and Atolls SEE ALL

Quickly find The Cayes and Atolls hotels and compare prices.

Recommended Restaurants in The Cayes and Atolls SEE ALL

Find the best food tours and activities in The Cayes and Atolls.

From Caye to Cayo: Top 4 Experiences in Belize
Considering a trip to Belize? Here are four of our favorite experiences for a memorable “surf and turf” itinerary.

25 Amazing Hotels With Eye-Popping Views
Some properties truly outshine the rest when it comes to the surrounding scenery.