In order to predict the summer weather, the ever-practical Swiss turn not to the meteorologists of the world—but to the obliteration of snowmen.

Cheese. Chocolate. Heidi. At first glance, Switzerland seems peacefully innocent. Look down from an airplane and you see nothing but snow-sprinkled peaks, hiker-filled valleys, and sparkling lakes. From up here, you wouldn’t know it, but in the center of Zurich, the Swiss are preparing to burn a snowman at the stake.

This snowman, the Böögg, will meet his fate at precisely 6 p.m. on the third Monday in April. His unfortunate demise is part of a very winter-hostile, yet family-friendly Zurich holiday called Sechselaeuten.

While the other tourists are running through Alpine meadows full of virgin wildflowers pretending they are in the Austrian-based Sound of Music or flocking to see Heidi’s house and the apple tree blossoms burgeoning around it, you’ll be standing in front of Zurich’s opera house witnessing what most visitors never do—pure, unadulterated Swissness. 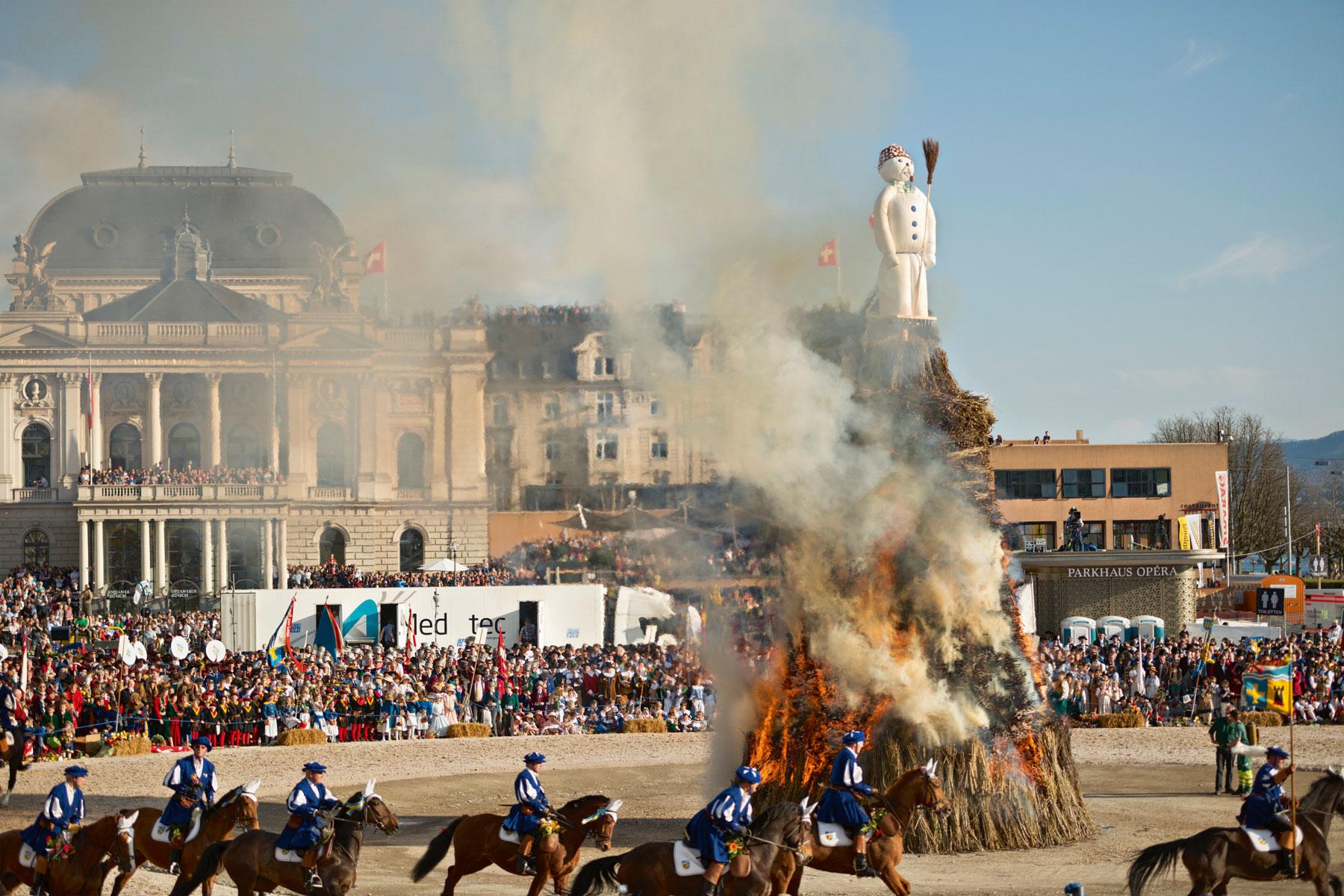 According to Swiss folklore, the Böögg must be burned. Unlike the Americans, the Swiss have no groundhog that sees his shadow (or doesn’t), so in order to predict the summer weather, the Swiss blow up a snowman. 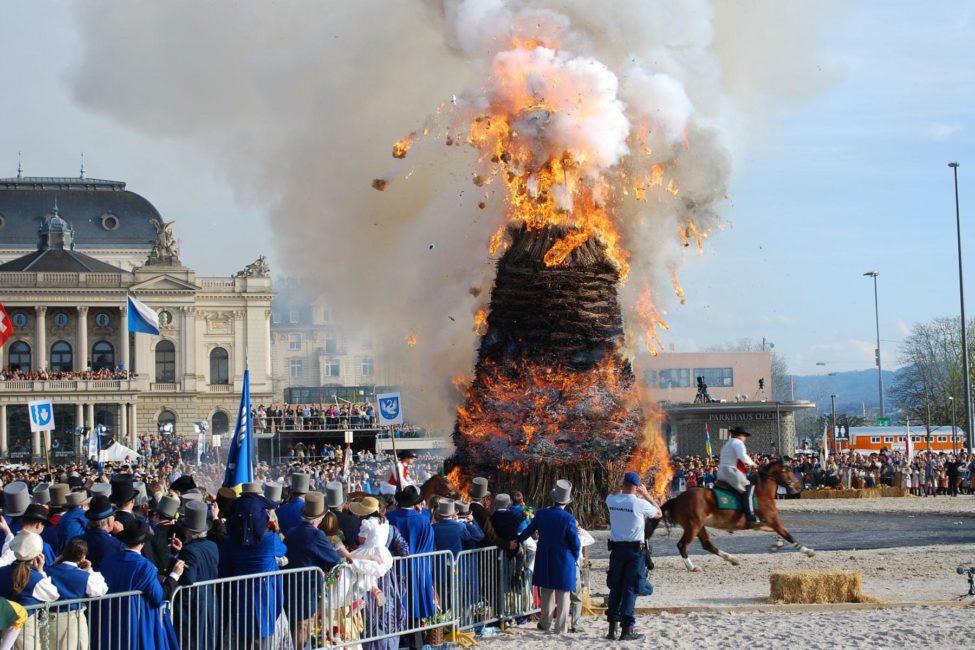 The Böögg is no ordinary snowman, however. He’s made of straw and cotton wool and filled with explosives. Standing at over 11 feet tall and a fireman’s worst nightmare, he’s set ablaze when the church bells ring the hour at 6 p.m.

The Sechselaeuten holiday is such a big ordeal that the locals have the afternoon off from work so they can join the festivities. The anticipation begins several hours before the Böögg’s burning time with a parade down Zurich’s main shopping street. Arrive on Zurich’s Bahnhofstrasse in the afternoon, and you’ll see costumed guild men on horseback, girls in flowered headdresses, and bands all marching with purpose towards one destination—the appropriately named Sechselaeutenplatz, where the Böögg (and the Swiss) await their fate.

Once in front of the Zurich Opera house, the guild members thunder around the pyre on their horses, bands play the official festival tune, and crowd members eat cotton candy as they all look forward to the snowman’s quick and painless death. 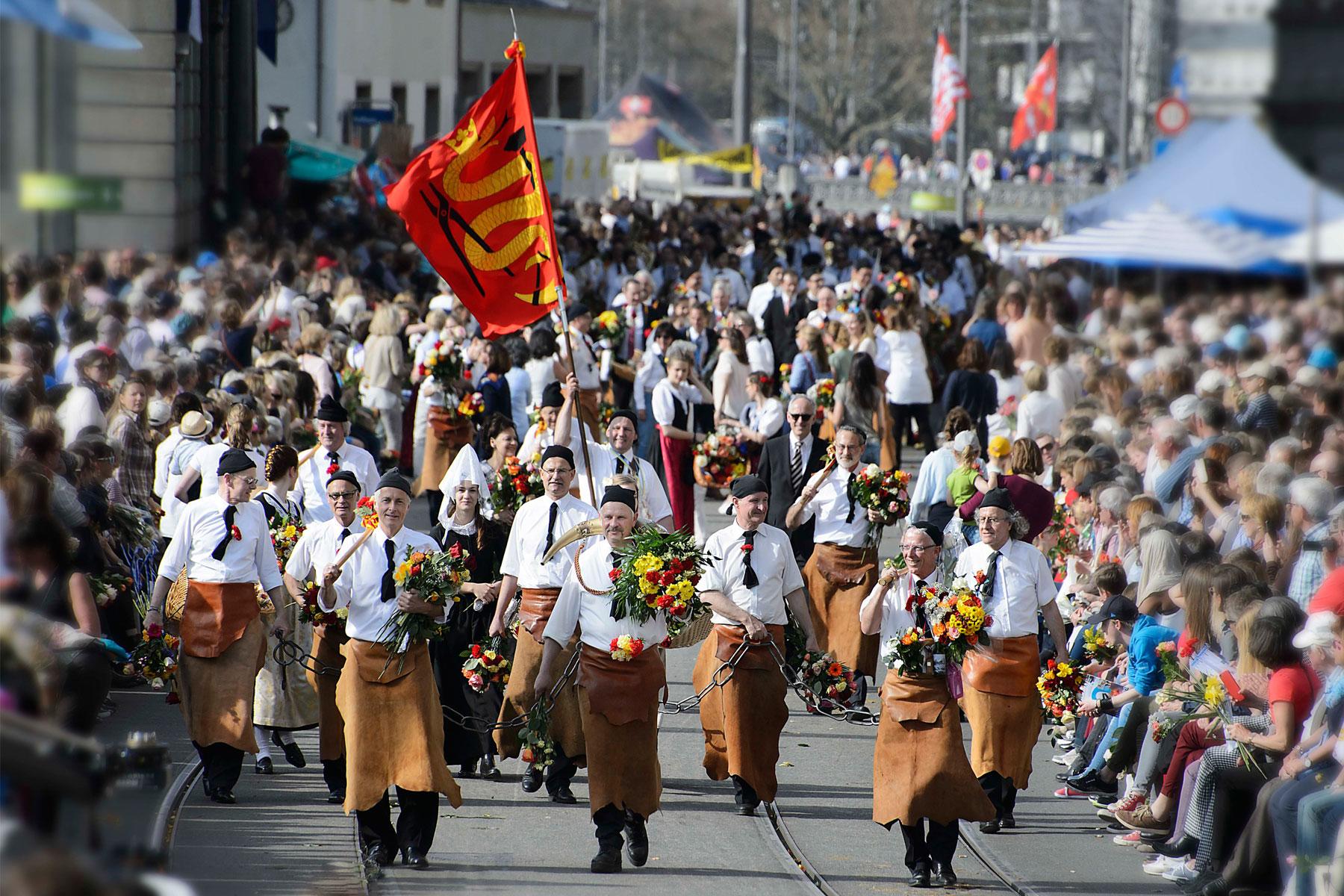 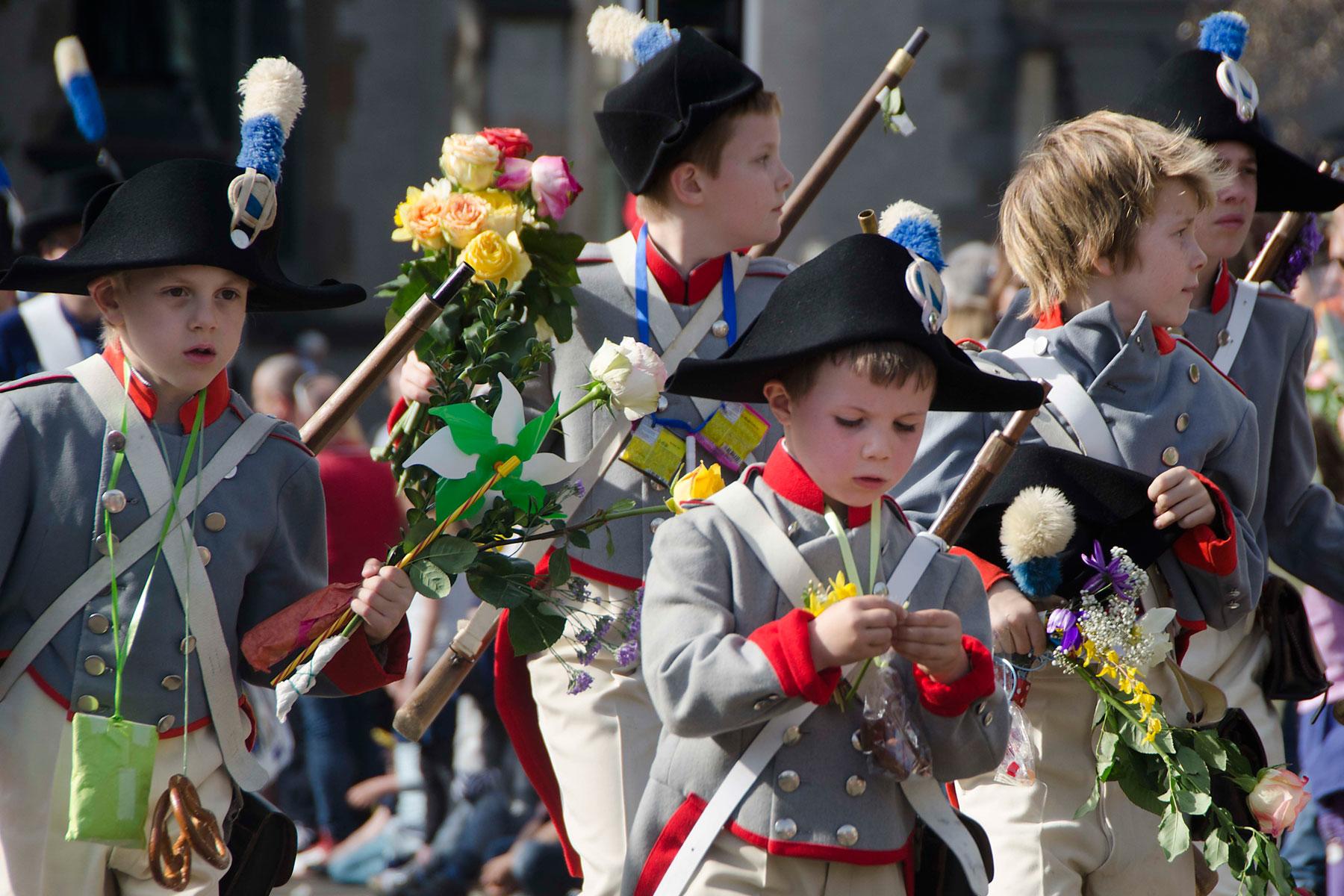 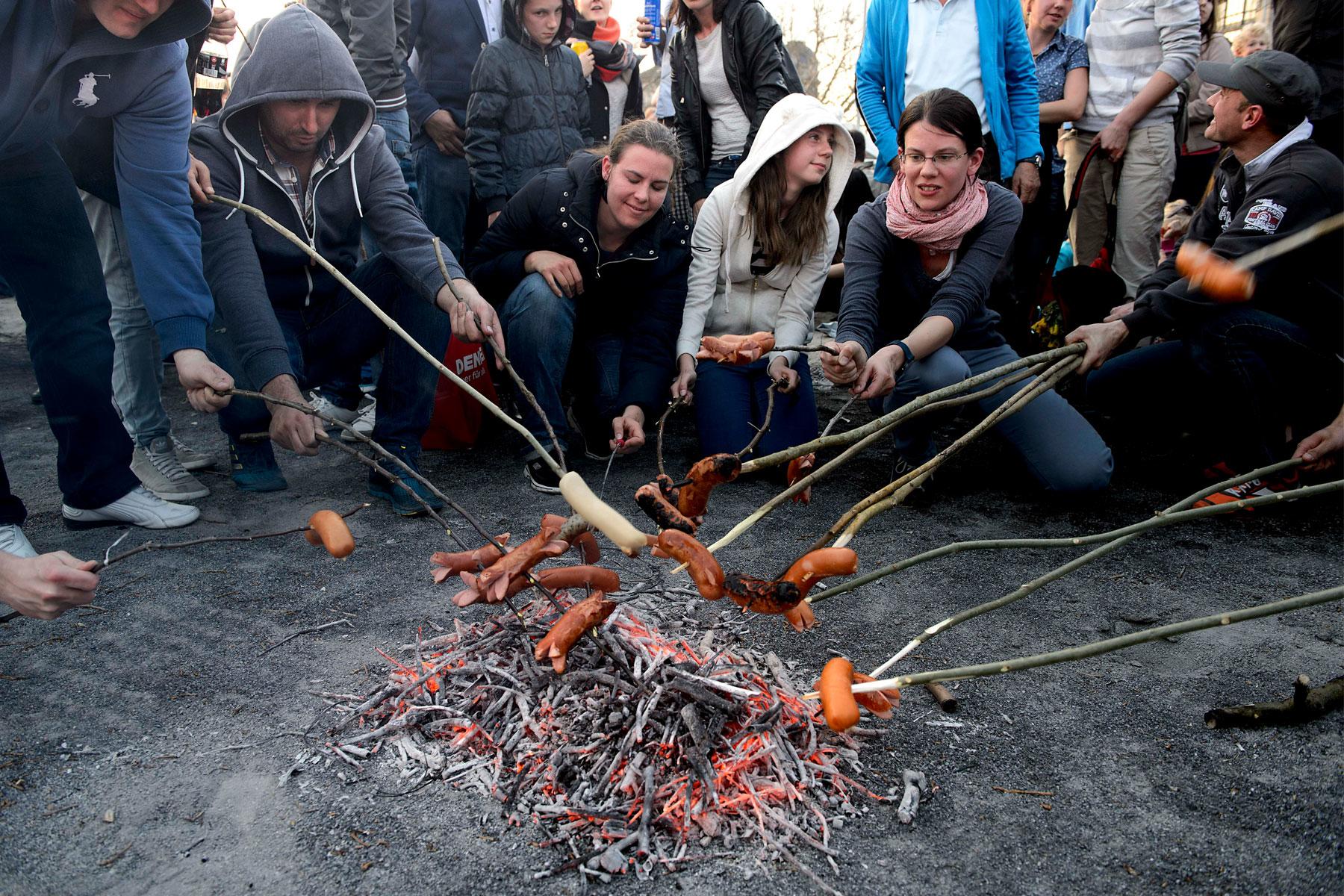 Swiss folklore says that the longer it takes for the Böögg’s head to explode, the longer it will take for summer to appear. Ideally, a quick explosion of the entire head and neck decapitates the Böögg in less than six minutes, which will mean a hot and sunny summer (with no air conditioning) for the Swiss. But if the Böögg takes more than fifteen minutes to explode, the Swiss will prepare to forget summer because July snow showers are coming.

Unfortunately for the Swiss snowmen of the world, Sechselaeuten has been celebrated in its current form since the end of the 19th century. The holiday centers around one of the things the Swiss like best: time. In fact, the word Sechselaeuten means, “the ringing of the six o’clock bells.” The snowman meets his fate at 6 p.m. because in medieval times, the workday ended at that time during summer hours. Due to the increased number of daylight hours beginning on the Monday following the vernal equinox, people not only had an extra hour to work, but they also had extra sunshine for leisure pursuits.

Speaking of leisure, after the Böögg’s explosion, it’s party time, at least until the summer comes (or doesn’t). So when in Zurich, come to the festival with your own Cervelat, or sausage. Put it on a stick. And as you join the locals in grilling your sausage in the poor Böögg’s embers, you may come to a conclusion: perhaps Switzerland isn’t so neutral after all.