The age-old question of how to find the best paella in Spain is not one of the worst dilemmas to face, but it can be one of the most confusing.

Ask any Spaniard and they’re sure to have a very strong opinion on where you can find the best paella. But they’d probably give you a completely different answer to the next person you ask, who would give you a totally different reply to the previous two; because people’s ideas of where to find “the best paella” can be frustratingly subjective.

However, where paella geographically originates from, the precise ingredients of the authentic recipe—and what paella is not—is something that there are definitive answers to. Plus, there are also some tricks that can help you recognize what constitutes a perfect paella.

While everybody knows paella is Spain’s most famous culinary export, fewer people know Valencia is where the dish originates from. And even fewer folks know paella comes from the tiny pueblo of El Palmar, rather than the ancient city of Valencia itself.

Leave the Hipsters Behind

Head just 20-30 minutes’ drive south from the city and you’ll suddenly find the crowded hipster bars, medieval buildings, and cupcake bakeries replaced by landscapes of infinite rice fields and silence, only interrupted by the calls from wading birds.

Rice was introduced here by the Moors during their 500 years of rule in the region (along with many other things associated with Valencia today, such as oranges, palm trees, and silk). They found the natural wetlands, Spain’s largest freshwater lake (Albufera), and 300 days per year of sunshine created ideal conditions for cultivating short-grain rice.

To get to El Palmar, either hire a car or take the shiny, accessible Line 25 EMT bus (€1.50 each way). The latter of the two will painfully maneuver over a canal bridge too tiny and old to have ever anticipated such manhandling. 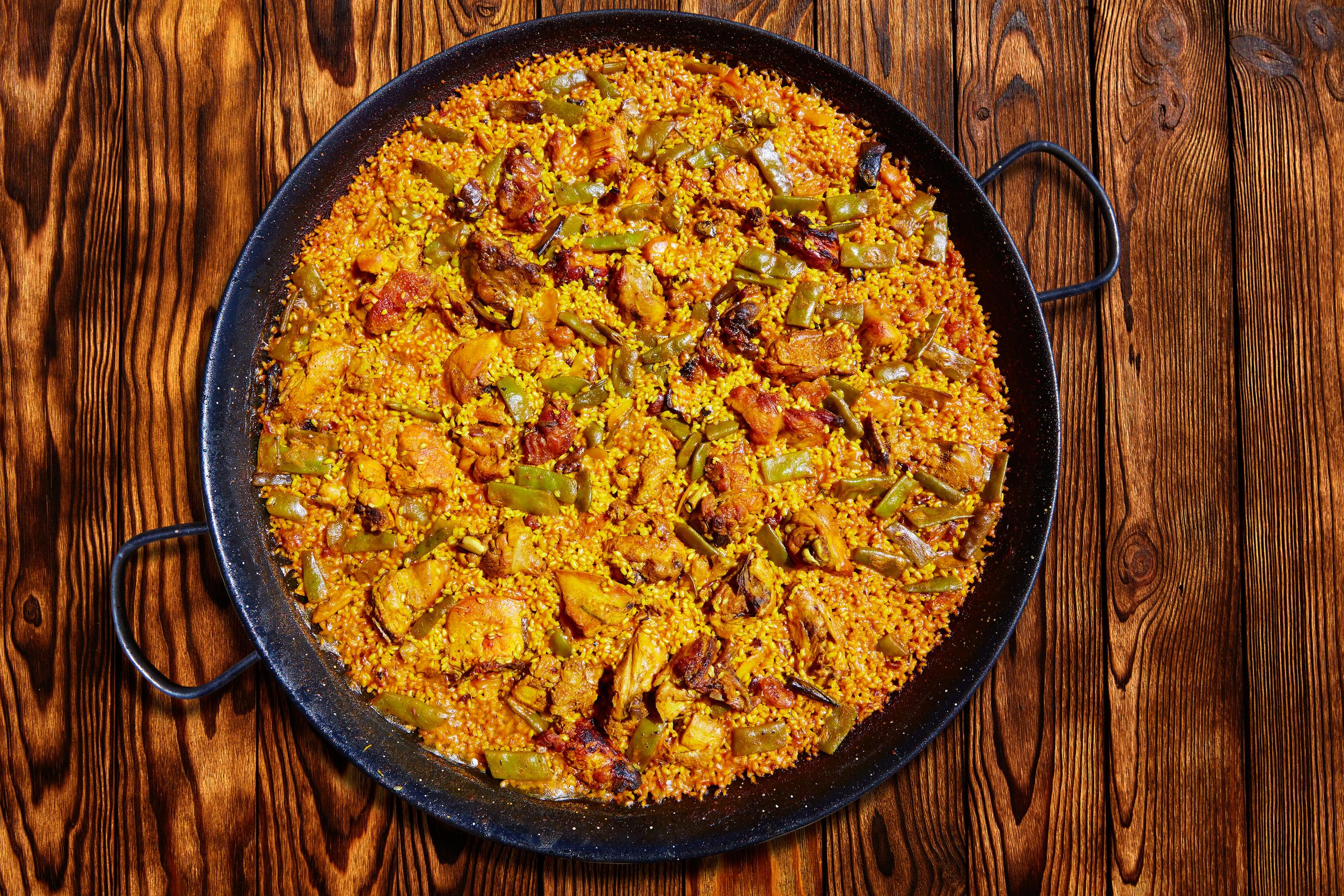 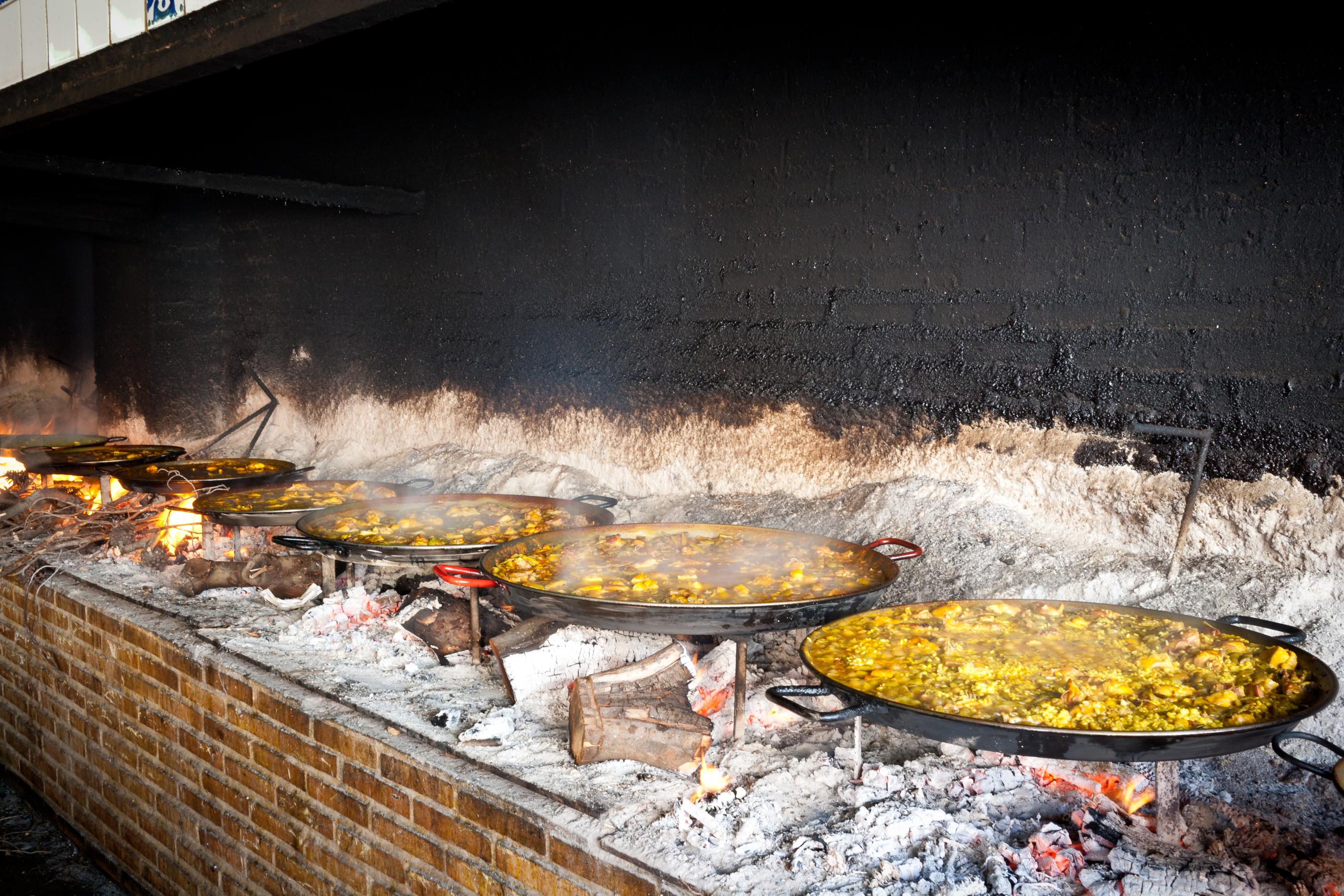 A Village Amongst the Rice Fields

El Palmar lies in Albufera Natural Park; a mixture of wetlands, forests, and orchards between the southeastern shore of Albufera lake and the golden beaches of the Mediterranean.

On arrival in the village, you’ll discover narrow emerald-green canals slicing past colorful houses decorated with Manises ceramics. Tiny painted wooden rowing dinghies are moored against the walls of the canal, and the unmistakable scent of saffron and cooked rice wafts through the air.

Paella was first recorded here in the 6th century after Moorish Valencia was conquered by King Jaume I. Another thing that was recorded was 18th century: Valencians using water vole meat as one of their main ingredients. Thankfully, that practice has gone the way of horses and carts.

So, you’ve found the home of paella. But on this enjoyable gastronomic quest for authenticity, how can you tell what makes the best paella and what doesn’t (no, we’re not still talking about water-voles).

The first thing to note is to make sure you have it for lunch. Paella is a lunch dish, not a dinner dish. In Spain, lunch time is 2 p.m. to 4 p.m.

Now for the lowdown on the ingredients. “Valencian paella” is believed to be the original recipe—not seafood paella. It consists of local white short-grain senia rice, rabbit, chicken, snails, two types of green beans, garrofó (a type of lima bean) paprika, garlic, salt, saffron, and rosemary.

In artichoke season, artichokes replace the snails and sometimes they use duck instead of chicken. But there’s definitely no chorizo in there. Valencians regard paella as one of their defining symbols and any attempt to change the original recipe is met with scorn and sarcasm (celebrity chefs Gordon Ramsay and Jamie Oliver know only too well, having faced a backlash after deviating from the recipe).

The rice is really important. It must be short-grain rice and is never braised in oil. How it’s cooked is another key to finding the best paella. It must be cooked in a wide, shallow steel pan called a paella, and it’s always made for two or more. Some restaurants cook it in the wrong pan, which affects how it cooks, or even use long-grain rice, which is just plain wrong. The rice shouldn’t be more than one centimeter deep.

When your meal arrives, you can tell from how it sticks to the bottom of the dish if it was cooked in the same pan. Senia rice is slightly stickier than the bomba rice that most paella chefs use elsewhere, but when it is served it should be dry and al dente. It’s more susceptible to over-cooking but a good chef will get it just right. And if it falls off your fork in one massive clump, you’ve been had.

It shouldn’t be over-laden with so many ingredients you can hardly see the rice, either. And if it’s extremely yellow and shiny, it means they used yellow food coloring with no flavor instead of saffron. Saffron has a softer ochre hue and a subtle aroma.

Restaurante La Isla, Nou Raco, and the award-winning Bon Aire are amongst the most popular restaurants in the village but standards are high amongst all of the canal-side eateries, although there’s not a water vole in sight—some traditions are more worth keeping than others.