Two weeks spent largely underwater was just what I needed to come to life.

Many of us are time-traveling during the pandemic, back to those places and people we’ve journeyed to and loved best—but still can’t visit during this very strange moment in time. Mostly where I’ve been going in my mind during all of this is underwater—to the blue, rocking womb of the ocean where the only mask I’m wearing is a scuba one.

For as long as I’ve been doing it, scuba diving has been my escape (I got certified 24 years ago while I was a college student in Florida—best elective ever). Once you put the regulator in your mouth to breathe and slip underwater to start blowing bubbles through it, all the cares of the topside world are put on pause. You become instantly aware of your breath as your lifeline—each inhale and exhale a subtle reassurance and reminder that as long you’re still breathing, everything is OK. And I needed that now more than ever. I was finally able to get back underwater in September on a trip to the Azores and mainland Portugal. Although Europe is technically closed to Americans, I was surprised (and relieved) to learn that people traveling on official business, as I was, can enter. With my required negative PCR test taken 72 hours within arriving in the Azores in hand, I caught a nonstop flight from Boston on TAP Portugal to Ponta Delgada on São Miguel island for a trip arranged by Portugal Dive—a boutique dive concierge that organizes group and solo trips for guests to experience Portugal’s underwater highlights on the mainland and in the Azores and Madeira.

INSIDER TIPYou can dive year-round in mainland Portugal and the Azores, but May through October brings the most pleasant waters. Portugal Dive can arrange single-day dives and multi-day itineraries with all the moving parts of accommodation, transportation, liveaboard diving, gear rental, and apres-dive suggestions for fun in the mix.

I barely had time to sleep, the flight is so quick. I fell asleep in the dark just before midnight while we were taxiing for takeoff and woke up four and a half hours later to daylight streaming through the plane’s windows. After viewing life from ground level for so many months, the crumpled emerald coastline of São Miguel below felt like a mirage.
And checking into my room on the island’s south coast at Pestana Bahia Praia–an elegant hotel overlooking a crescent of black sand beach lapped by waters a clear cobalt hue–reminded me of how much I’d missed luxury linens in a bed all for me and salty ocean winds.

Liveaboard Diving in the Azores

My home for the week was the Water & Wind, a 43-foot catamaran that’s one of just two liveaboard dive boats operating in the Azores, an archipelago of 11 islands. Usually, scuba divers base themselves on land on the islands of Pico, Terceira, Santa Maria, or São Miguel, and then head out on day trips to dive. But I was looking to maximize my time on and in the water, so living and sleeping aboard a boat equipped with all the dive gear and a compressor for filling tanks seemed like the best way to do it.

When you’re diving on a liveaboard, the entire schedule revolves around the tides and the day’s diving schedule, with meals served in between (on the Water & Wind, those were lavish spreads of local seafood and Azorean-grown pineapple and cakes for dessert). With as many as four dives a day, it can be exhausting squeezing yourself in and out of a wetsuit, hood, and boots (the water here hovers around the 72-degree mark during the warmer months). But after all the mental exhaustion of the pandemic, getting physically exhausted doing something I love was exactly what I was hoping for. The Water & Wind has four cabins to host up to eight divers, and our group hailed from Belgium, Germany, France, Portugal, and Holland. Several of the guests were divers used to visiting far-flung destinations like the Maldives and Palau who were looking for a destination closer to mainland Europe this year, and all of us had shown COVID-19 tests to enter the islands. Underwater photographers and experienced divers from around the world have the Azores on their radar for encounters with big pelagic animals including blue sharks, whale sharks, and mobula rays. The offshore pinnacles, washed with currents, aren’t for beginner divers, but they’re a welcome challenge for divers with some experience under their weight belts and a desire to see bigger things in exposed Atlantic waters. 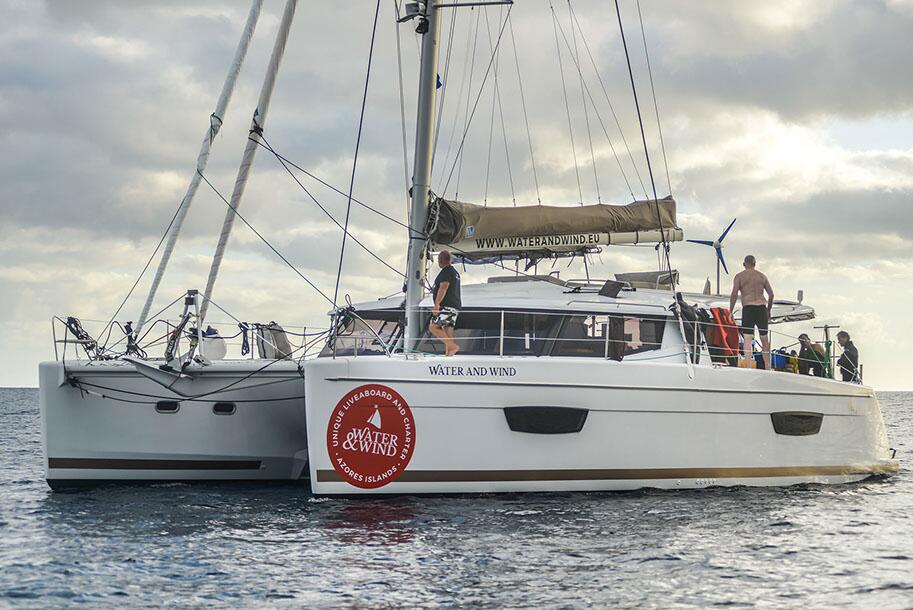 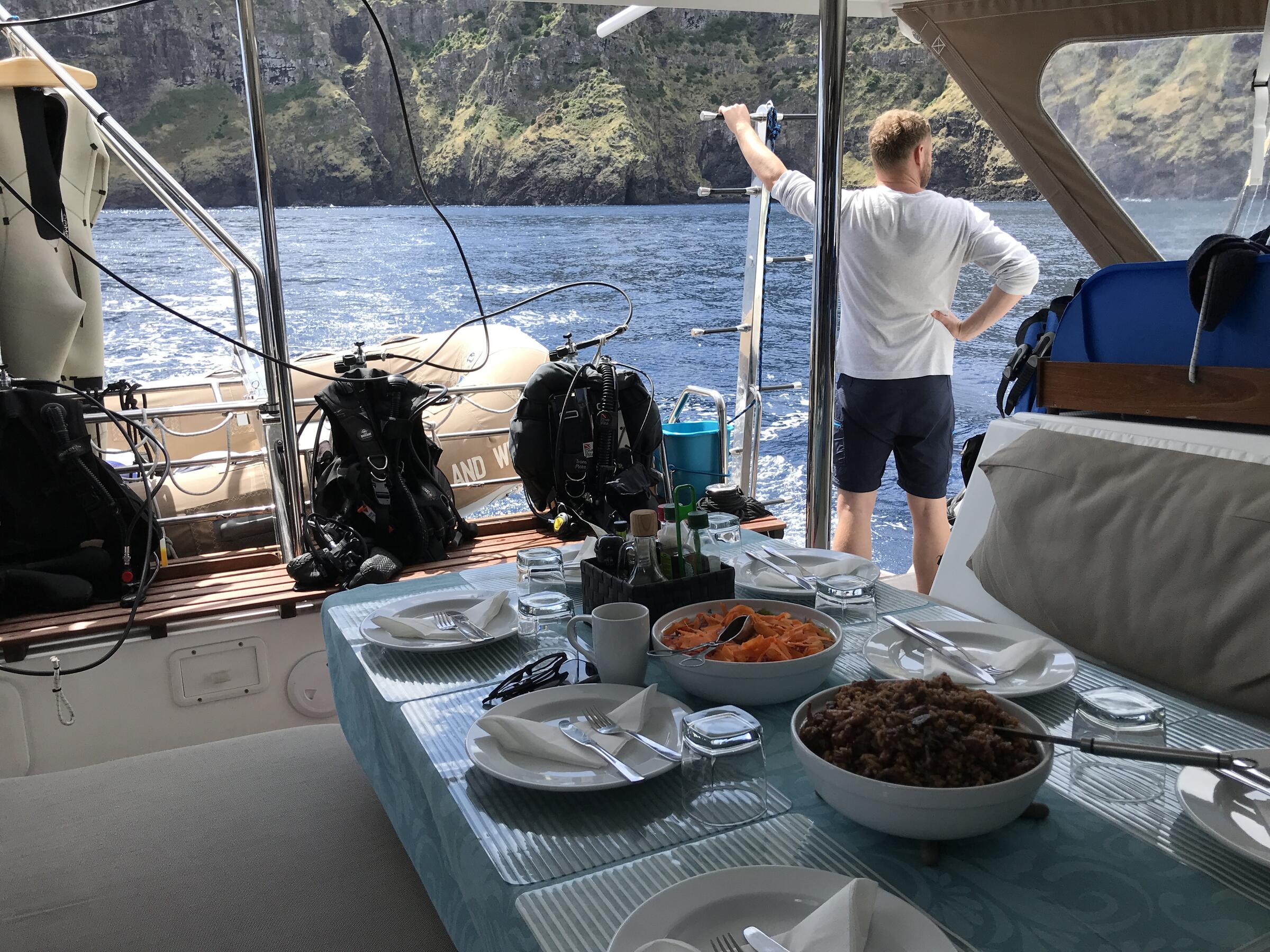 At the dive site called Ambrósio off Santa Maria Island, we descended about 30 feet and held onto a buoy line attached to a deep, underwater pinnacle where mobulas, whale sharks, and other pelagic fish feed in the current. I flew there sideways in the current like a flag blowing on a pole as several mobulas made close passes. On other dives, we saw barracuda and jacks schooling like underwater tornadoes and wended our way through strange volcanic formations. As you’d expect for such an exposed archipelago, the weather can be unpredictable in the Azores. On days when the conditions didn’t cooperate to dive, we’d spend our time hiking in the hinterlands of Santa Maria Island, with landscapes that look like what you’d expect to see if, say, New Zealand and California gave birth to a love child in the Atlantic—only greener. On our fifth day of the trip, we all bonded over a mandatory group COVID-19 test outing on land—people staying more than seven nights on the Azores are required to take a free test on day 5, and we’d all received emails from the local government about our appointments. Both nostrils and our throats swabbed for good measure, we were in and out in 15 minutes, and had the results back before lunch the next day.

After a few more memorable days diving and hiking in the Azores, I hopped the two and a half hour flight on TAP Portugal from São Miguel to Lisbon and got my land legs back at the lovely Lisbon Plaza Hotel, a quiet spot right off the Avenida da Liberdade (Lisbon’s answer to the Champs-Élysées). Down to the tomato slices, each item was individually wrapped at the breakfast buffet, which I had to myself, and the general manager told me how much they were missing Americans, their main market. While the Azores is famous around the world for scuba diving, diving off Portugal’s mainland coast is a lesser-known thrill. It could be because the water is even colder (around the mid-60s in the summer), but more likely, people just don’t know what’s there. As Serrao from Portugal Dive told me, “Portuguese divers travel to Croatia, the Maldives, and many other places to dive without ever knowing what we have right here at home.” Determined to find out what they were missing, I set out for Sesimbra, about 40 minutes south of Lisbon, to head underwater with Dive Club Cipreia.

A quick boat ride from the shop brought us to the submerged wreck of the River Gurara, a Nigerian cargo ship that broke apart and sank in 1989 during a big winter storm after an engine failure forced it onto the rocks and it split in two. Seven people died when the ship sank, including the captain, “but today it’s not so sad because it’s full of life,” our dive instructor, Ricardo, assured us. When we descended, it was easy to focus on redemption in all the life flourishing around the wreck, with conger eels and moray eels peeking from the rusting nooks and crannies and the silvery sparkle of schooling fish flitting like confetti everywhere. To fin within the skeleton of a shipwreck is to feel a certain gratitude just to be underwater, among the living and breathing. At one point, a large conger eel ribboned out from a rusty hideout and brushed its soft body, smooth as a banana peel, alongside my outstretched arm.

A Famous Surf Spot With Epic Diving, Too

More epic diving awaits less than 90 minutes north of Lisbon in Peniche, a beachside town famous among surfers for its consistent beach breaks and point breaks. What most of the board riders miss, however, is swapping out surfing for a scuba tank to see what’s below the surface within the UNESCO Berlengas Biosphere Reserve. A collection of rocky islands about six miles offshore, the archipelago is washed with currents rich with nutrients that attract a rush of marine life. I headed out with the biggest dive center in Portugal, Haliotis, for a look. 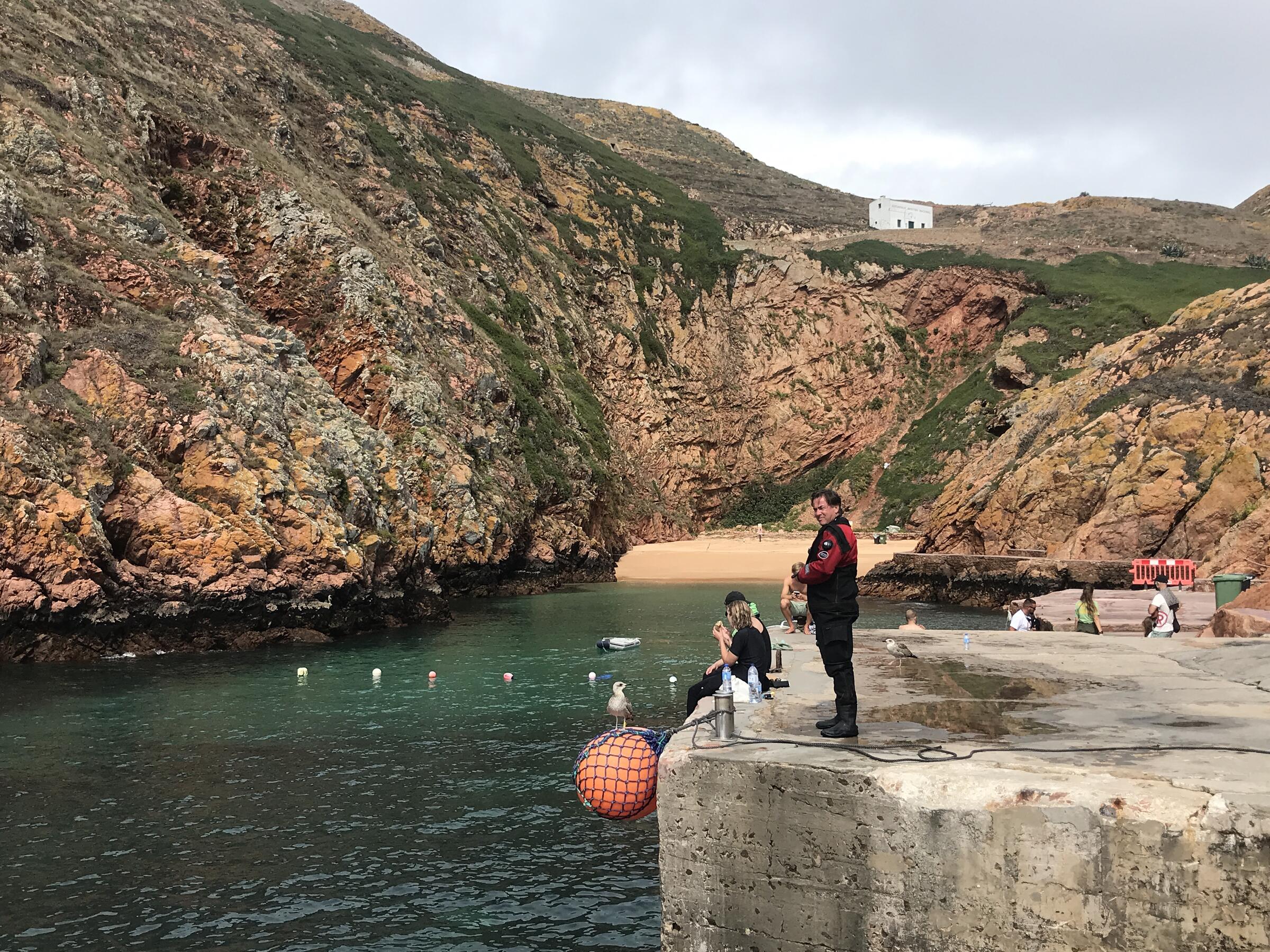 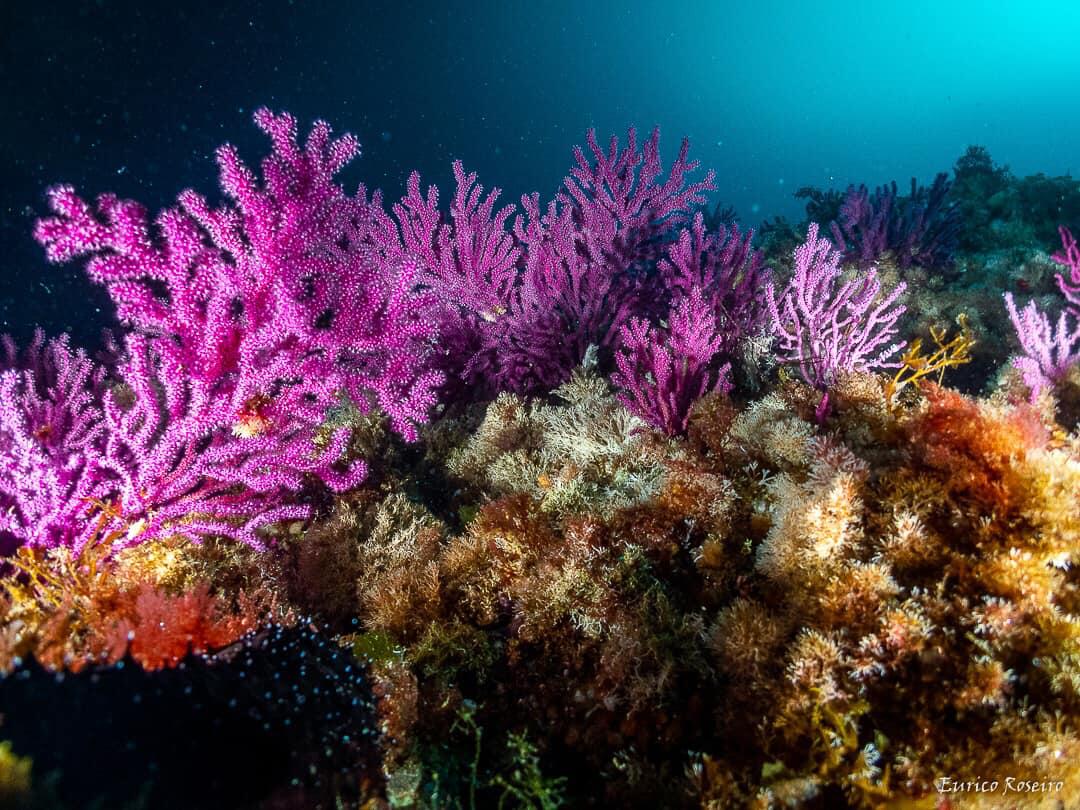 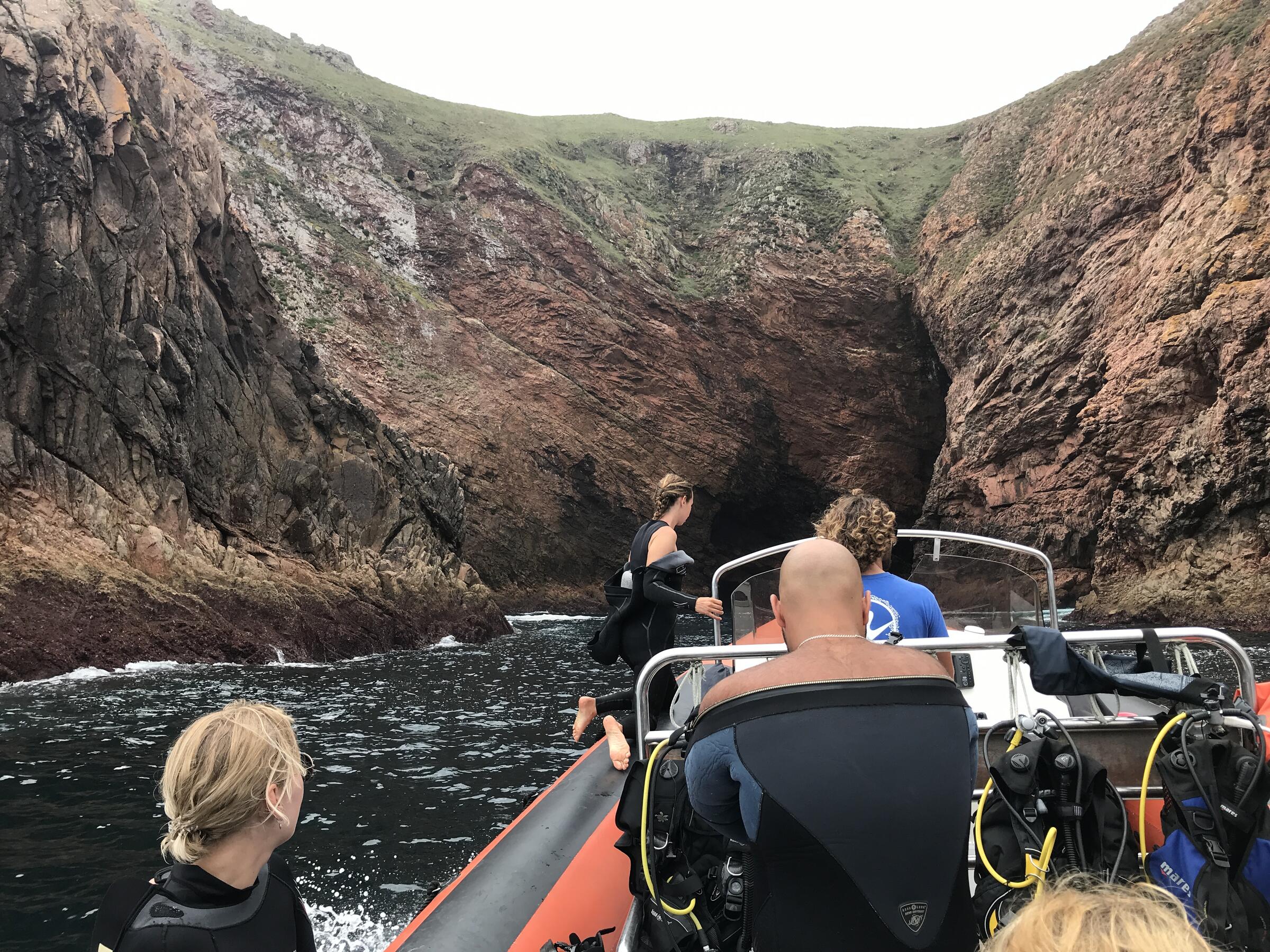 Caverns, caves, and sheer walls flanking the islands make for fascinating underwater terrain. And we spent the most memorable dive of the day letting the swell push us into the gaping mouths of underwater caverns, including one that was packed with so many schooling triggerfish they looked like treasure glinting overhead. My favorite dive day closer to Lisbon, however, was just offshore from Fonte da Telha beach, 30 minutes south of the city—a laid-back enclave with just a few beach bars and residences where towering sandstone cliffs back a long stretch of golden, undeveloped beachfront nearby.

Serrao and I headed out with a crew of his dive friends with Cabana Divers. And the fun started when a tractor pulled the dive boat down to the shoreline for a beach entry, with everyone working together—timing the big push into the ocean with a lull in the waves—to launch the boat into the water. At the dive site, Pedra de Lagao—a fishy reef down about 90 feet that’s just a short cruise from shore—Serrao told me that most of the fish we’d see on the dive were varieties found on local menus, too. “When we dive in Portugal, we often see what’s on the plate,” he said. We finned through schools of sea bream and horse mackerel and spotted cuttlefish and hiding scorpion fish among the corals before clambering back onto the boat and drying off in the sun. The travel moment I’m likely to play on repeat in my mind through any potential trying months ahead, however, came next—and if you’re a fan of apres-ski fun in the winter, then I can heartily recommend apres-dive fun in Portugal, any time of the year. Once we’d beached the dive boat back on the sand and warmed up with hot showers at the dive center, we headed to Cabana Beach Bar, next door, and settled around a big table overlooking the ocean to feast on the same kinds of fish we’d admired underwater. The casual theater of plate after plate piled with seafood from the waters we’d just been in, the smiles and laughs all around that broke through any language barrier, the after-glow of a shared experience with new friends in a new place—all these things hit me at once. And when the dive shop owner came around to pour us all shot glasses of persimmon aguardiente he’d made and started a toast in Portuguese, I didn’t understand a word but raised my glass, too—to everything I’d been missing all these long months on dry land.