A crossroads of East and West, Venice is a melting pot of architectural styles, with ever-captivating, oft-idiosyncratic examples of structures from several periods.

A tour of Venice is like a survey class on the history of Western architecture. The city’s glorious design history had humble origins, however. Refugees fleeing marauding barbarian tribes in the 4th and 5th centuries headed to the Venetian lagoon, where they built rough wooden huts on stilts above the marshy mudflats. Later, they learned how to work with the precarious shifting ground and to enlarge their structures by driving wooden piles into the mud.

Byzantine style, especially visible in palaces like Ca’ da Mosto, clearly shows the influence of the East. But it wasn’t until the Byzantine Empire’s hold over Venice ended in the 12th century that the architectural artistry for which Venice is known began. As the examples here show, however, this artistry continued through the Gothic, Renaissance, Baroque, Neo-Gothic, and beyond. 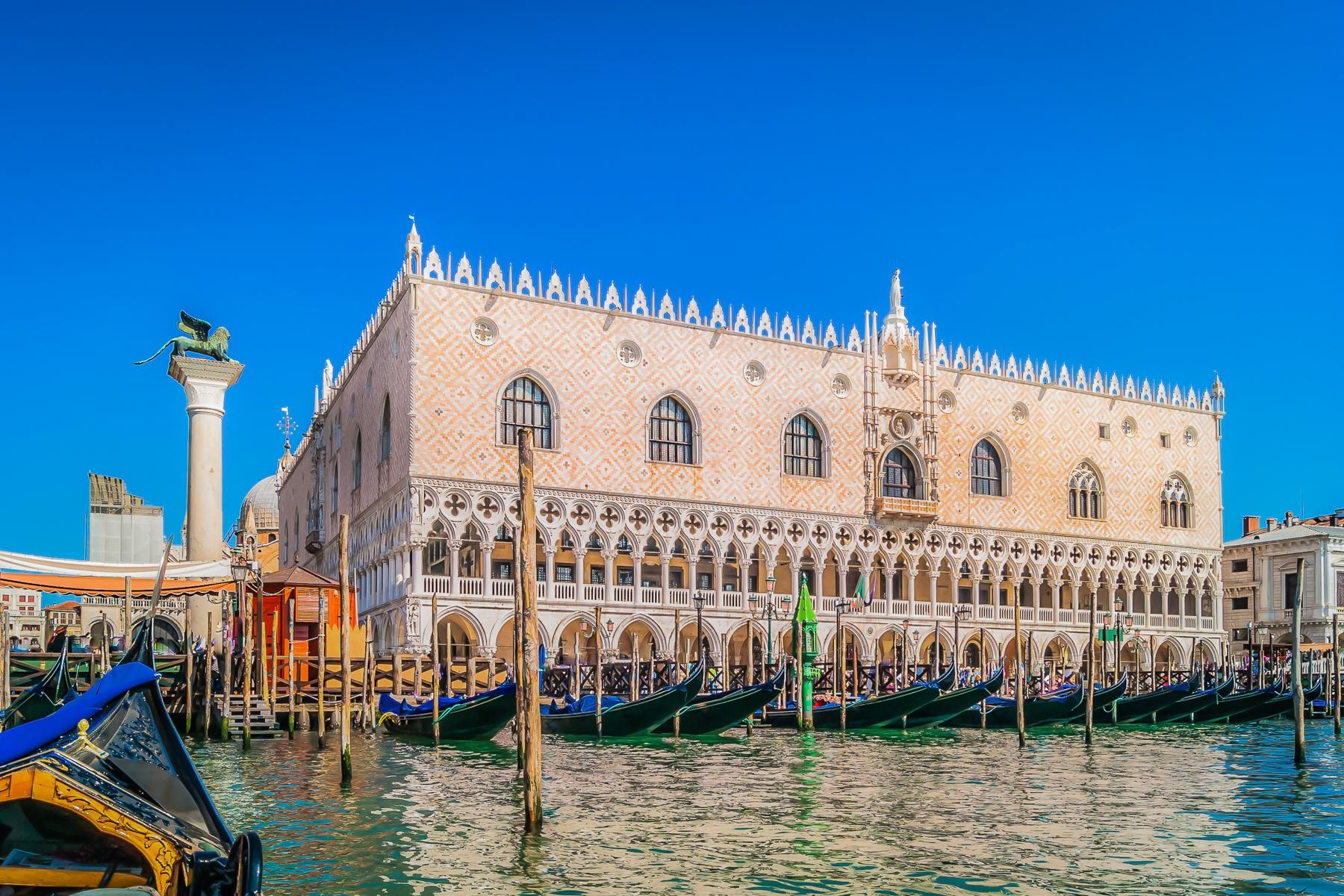 Adorned with a series of soaring Gothic arches, topped by an ornately columned arcade, and encased in Istrian limestone and blush-pink Verona marble, the labyrinthine Palazzo Ducale has a wedding-cake-like delicacy when viewed from the Piazza San Marco or the waterside Bacino di San Marco.

Conceived in the early 14th-century by architect Filippo Calendario and further developed in the 15th century, the palace is awash in Venetian Gothic opulence, as well as in the city’s history and intrigue. Highlights include the interior courtyard with its colonnaded loggias, the Scala dei Giganti (Giant’s Staircase), where each new doge was sworn into office; and the Prigioni Nuove (New Prisons), which are connected to the palace by the Ponte dei Sospiri (Bridge of Sighs).

INSIDER TIPTo fully experience both its dizzying splendor and dastardly history, it’s best to opt for a guided palace tour. 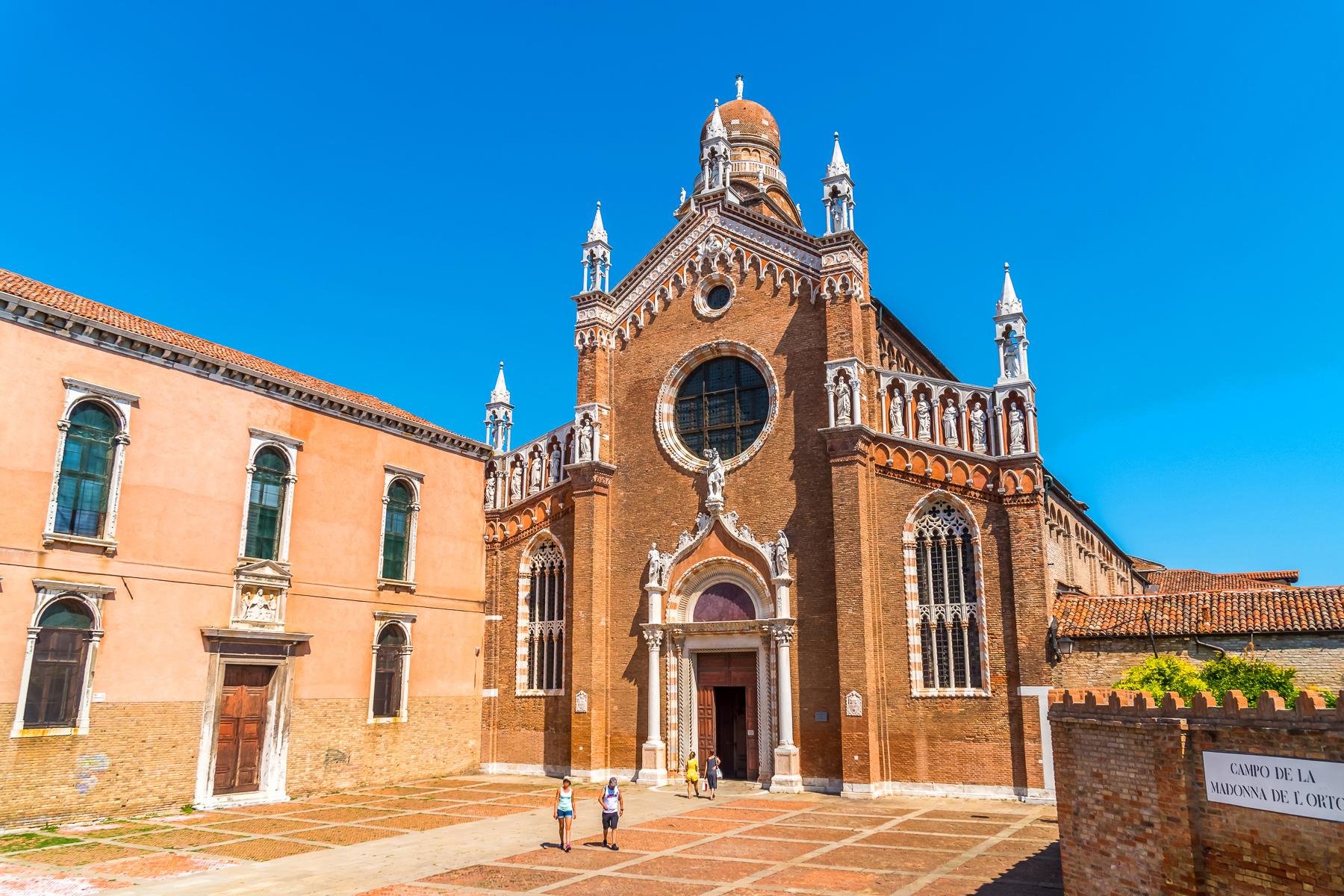 On the northern margins of the Cannaregio district, the Madonna dell’Orto—an alluring, red-brick Gothic church with ornate marble decoration—rises from a quiet campo. Note the statue of St. Christopher above the portal: the church was dedicated to the patron saint of travelers until a Madonna statue was found in a nearby orto (kitchen vegetable garden).

This was Tintoretto’s local church, and the painter left an impressive array of works here, including The Martyrdom of St. Paul (1556) and the swirling Last Judgement (1560–62). Apparently, Tintoretto learned his craft here and painted for the mere cost of materials.

INSIDER TIPLook for the statue of a turbaned moor on nearby Fondamenta dei Mori; it marks the place where Tintoretto lived. After the demise of various wooden bridges by fire and neglect, 16th-century Venetian authorities sought a more solid structure to span the Grand Canal in order to connect the busy, commercial San Marco and San Polo districts. The aptly named Antonio da Ponte leapfrogged illustrious rivals Andrea Palladio, Michelangelo, and Jacopo Sansovino to win the commission, and the iconic Ponte di Rialto was completed in 1591. Its generous arch, central portal, and Renaissance arcade make it appear so beautifully balanced that Palladio himself would surely have approved.

INSIDER TIP For views of the Rialto from the water, take a short, affordable (just €2 each way) traghetto ride across the Grand Canal, between Riva del Carbon and Riva del Vin. 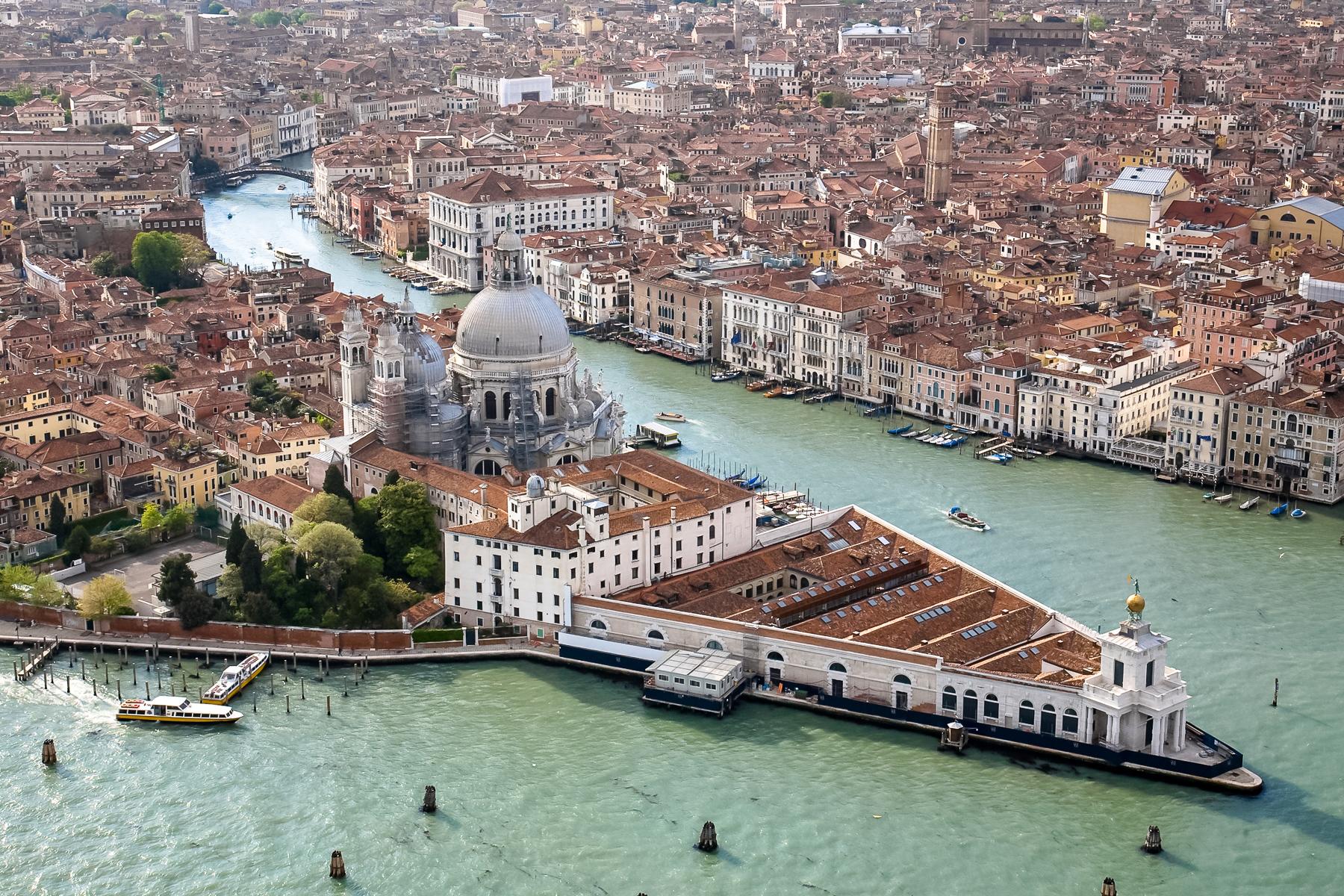 There has been a Punta della Dogana (Sea Customs House) situated between Venice’s two main arteries, the Grand and Giudecca canals, since the 15th century, although the wedge-shape building you see today was designed in the 1860s by architect Giuseppe Benoni. Above the entrance tower, two Atlases lift a bronze sphere topped by the figure of Fortune, which can, in this case, shift literally as well as figuratively with the wind.

From the late 1980s to the early 2000s the building was abandoned, but its scenic locale became a popular place for impromptu tourist picnics and late-night student revelry. In the late 2000s, the structure was renovated by Japanese architect Tadao Ando, reopening in 2009 as a contemporary art exhibition space—albeit one with a gorgeous, show-stealing backdrop.

INSIDER TIPThe spur of land surrounding the building remains a fabulous place to dangle your legs over the water and contemplate the sparkling views. 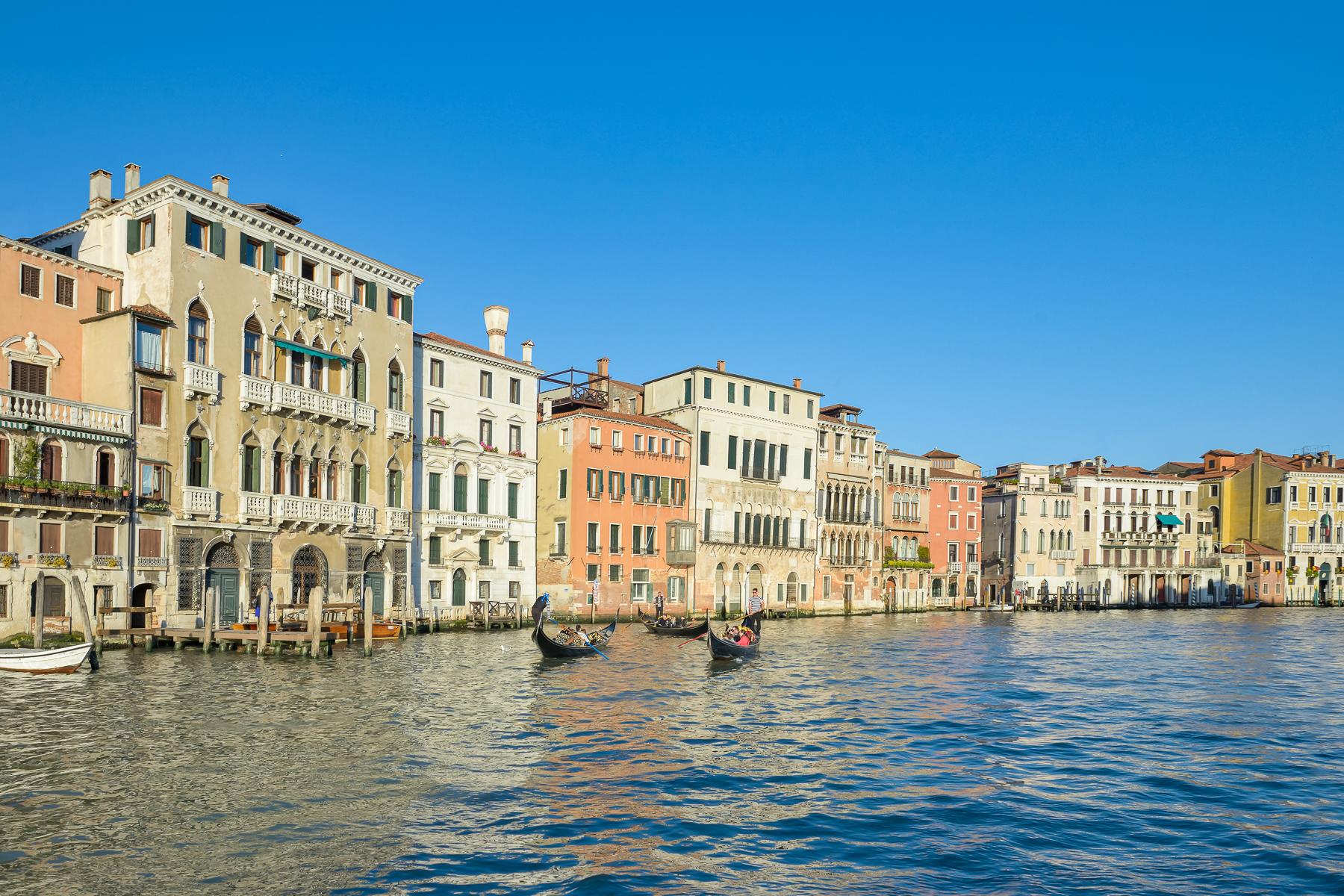 As you drift along the Grand Canal on a vaporetto, gondola, or traghetto, you’ll see many palazzi far more eye-catching than the Ca’ da Mosto, but none more enduring—the crumbling Byzantine-style palace has been here since the 13th century. The ground and first floors, part of the original structure, are an example of a casa-fondaco (a building that combines work and residential spaces), and another two floors were added later. After years of neglect, plans are afoot to transform the palazzo into a luxury hotel.

INSIDER TIPYou have to keep an eye out for the Ca’ da Mosto: It’s opposite the Rialto Mercato vaporetto stop not far from the Ca’ d’Oro. 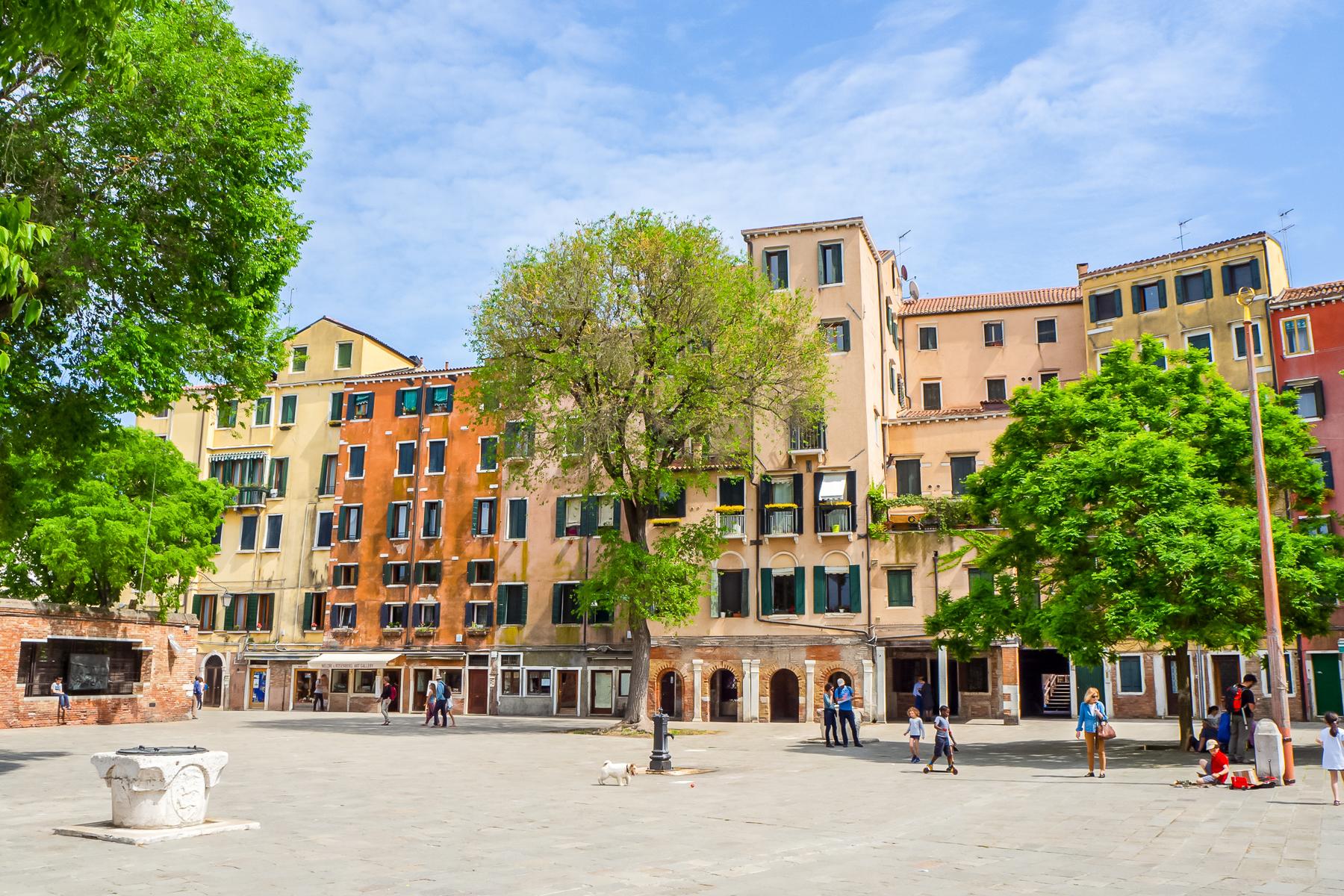 Originally the site of a foundry (geto in local dialect), this island in the Cannaregio district was where, in the early 16th century, Venice’s Jews were segregated from the rest of the city and subjected to a curfew. Both the atmosphere and the architecture set the Jewish Ghetto apart: palazzi and case are taller here than elsewhere, with story upon story piled on high in an effort to make the best use of limited space. 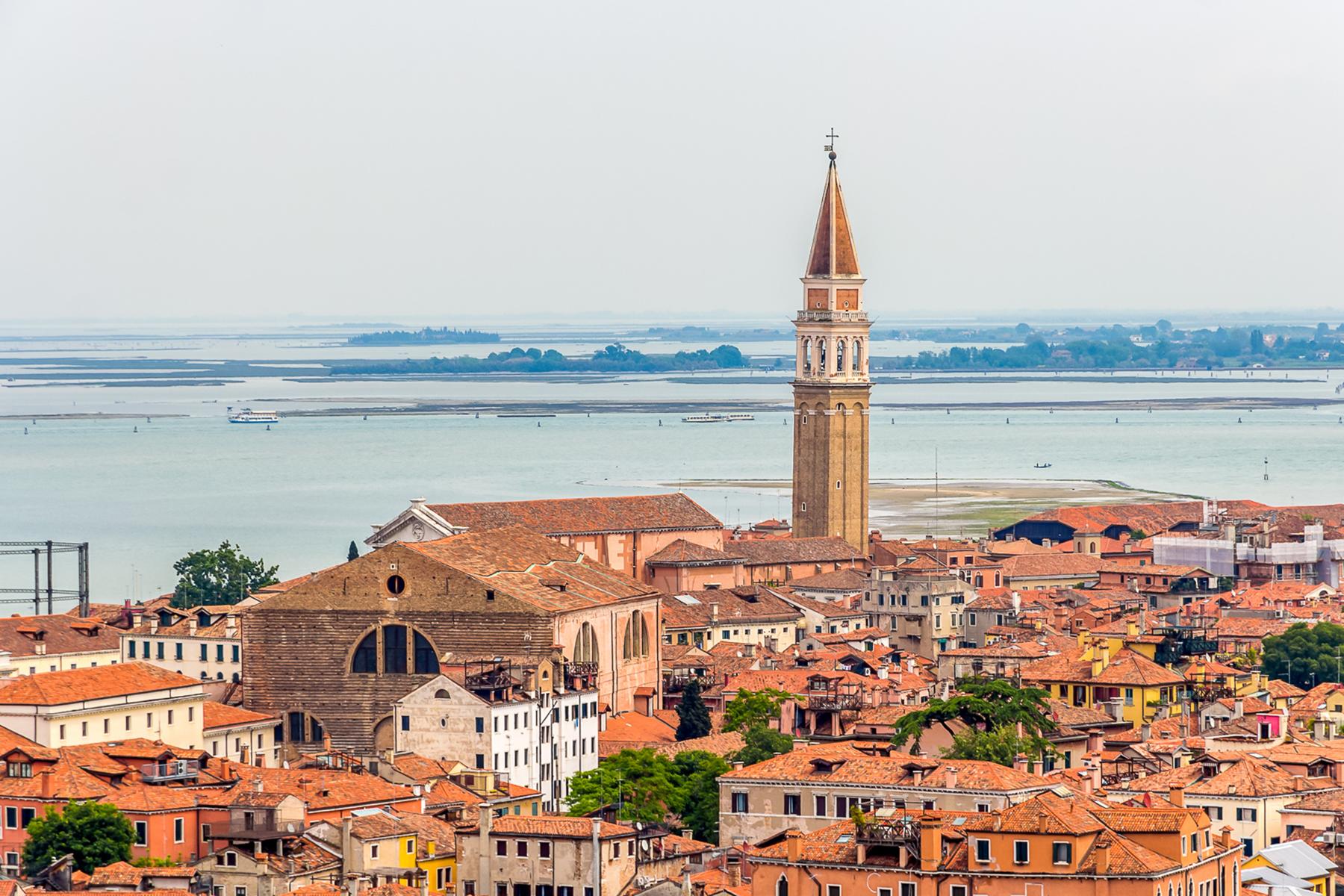 Enlarged by Jacopo Sansovino in the 1530s, the San Francesco della Vigna church in the Castello district is worth seeking out just for Andrea Palladio’s imposing facade. In addition, the harmonious combination of architectural designs by two Renaissance maestri and the tranquil neighborhood setting make it wonderful place to escape the crowds. Among the works in the simple Latin cross–plan interior are Paolo Veronese’s vibrant and swirling Resurrection (1584) and Giovanni Bellini’s Madonna and Child with Saints (1507).

INSIDER TIPDon’t miss the church’s three cloisters, two of which are usually open. 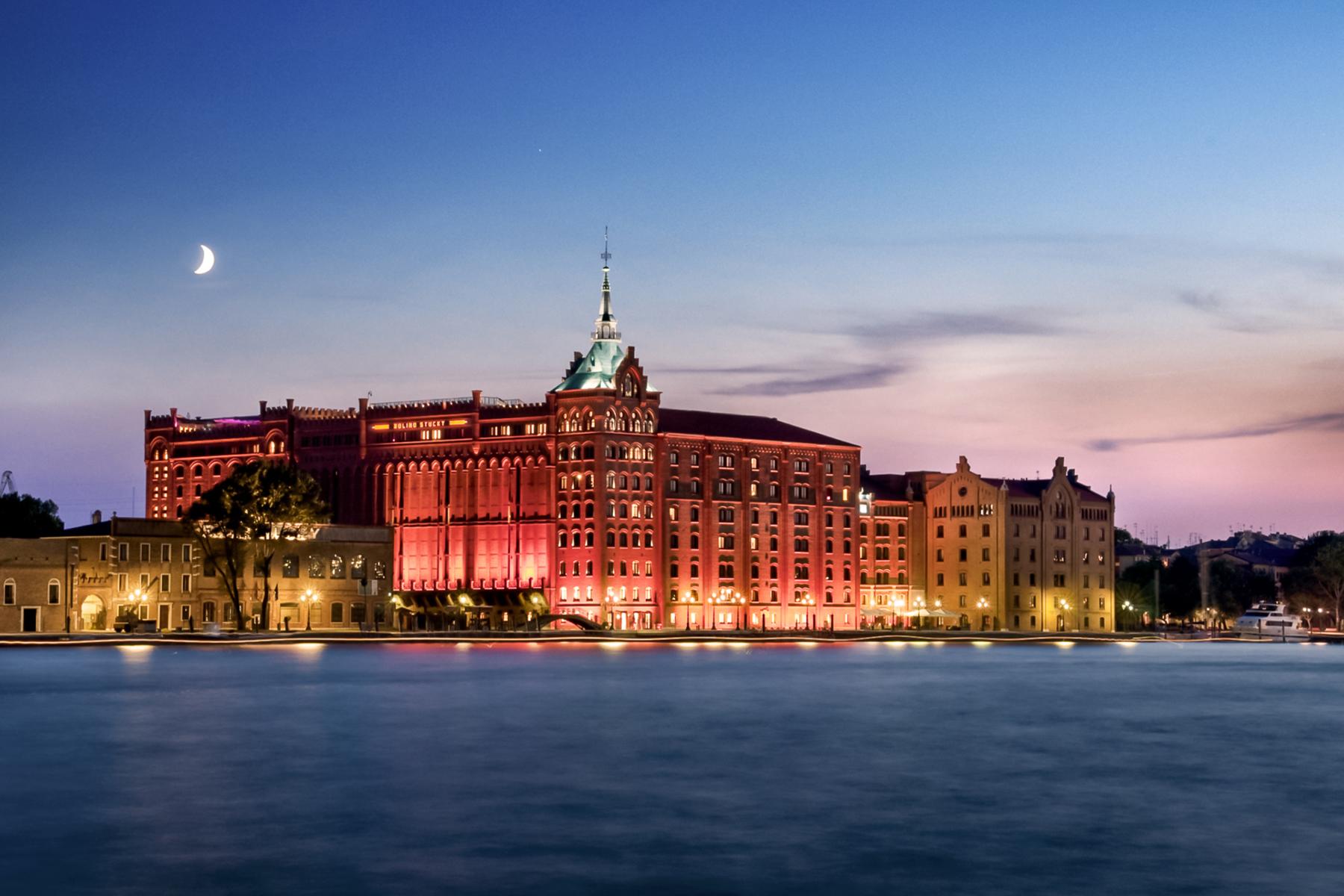 This behemoth, neo-Gothic warehouse-like building on the western end of the Giudecca certainly stands out on the Venetian skyline. Built by Swiss businessman Giovanni Stucky in the 1880–90s, it served as a flour mill and pasta factory until its closing in 1955. It remained dormant for decades before restoration work, begun in 1998 and punctuated by a fire in 2003, was finally completed in 2007. Today it’s the Hilton Molino Stucky—an eight-story hotel with a rooftop pool.

INSIDER TIPFor great views up and down the Grand Canal, head upstairs to the rooftop bar. 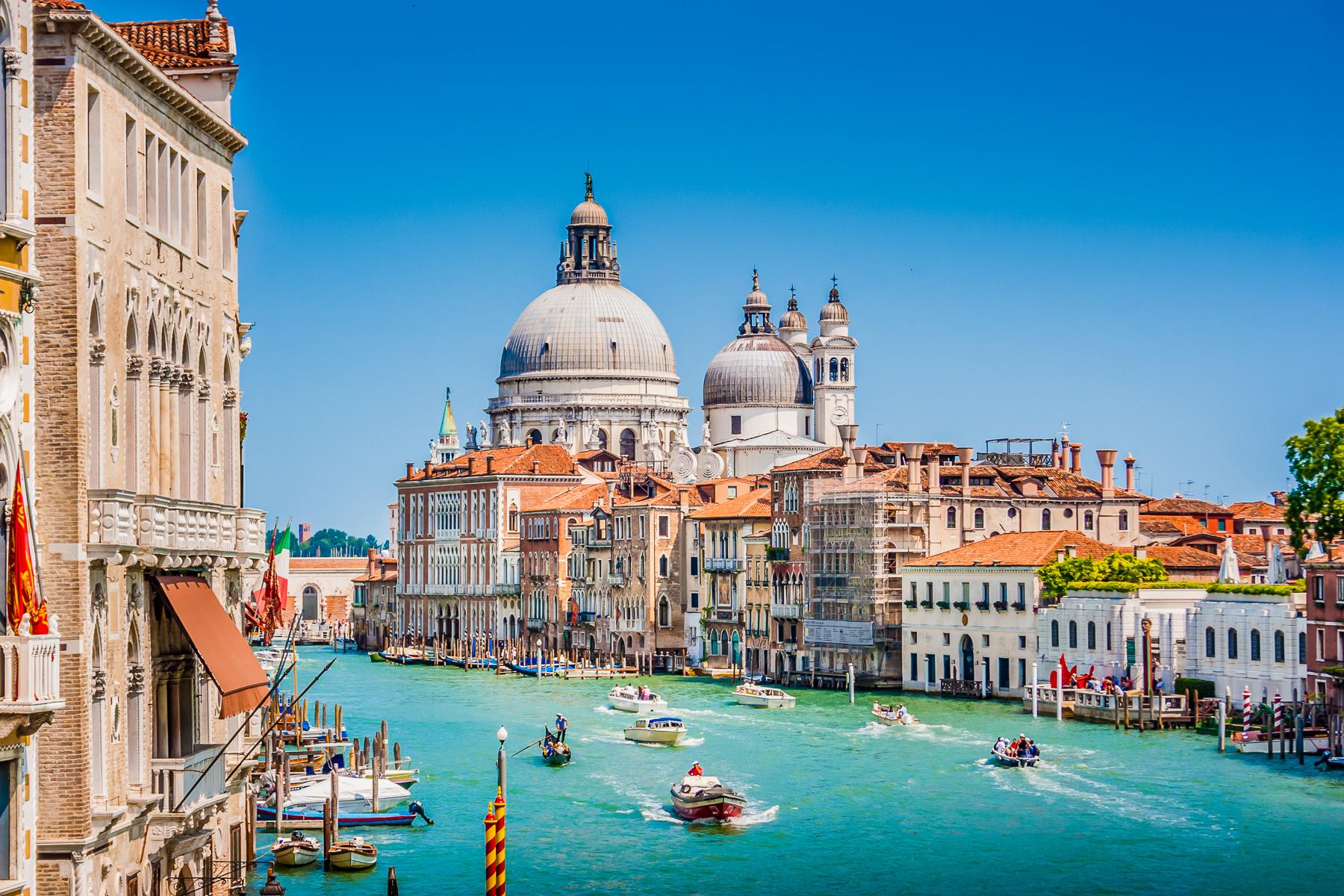 One of the city’s most beloved and iconic churches, La Salute was built to mark the end of the 1630 plague that took almost 50,000 Venetian lives. Designed by Baldassare Longhena at the age of just 32, it took half a century to build. Some 100,000 pinewood logs were driven into the soft mud to support this colossal structure. The solemn, spacious interior features gorgeous geometric marble tiles and many notable works of art, including paintings by both Titian and Tintoretto.

INSIDER TIPIf you’re in Venice around November 21, don’t miss the Festa della Madonna della Salute, when a votive bridge is constructed across the Grand Canal and food stalls are set up. Better still, befriend a Venetian—who may invite you home to sample the traditional castradina, a 16th-century mutton stew. 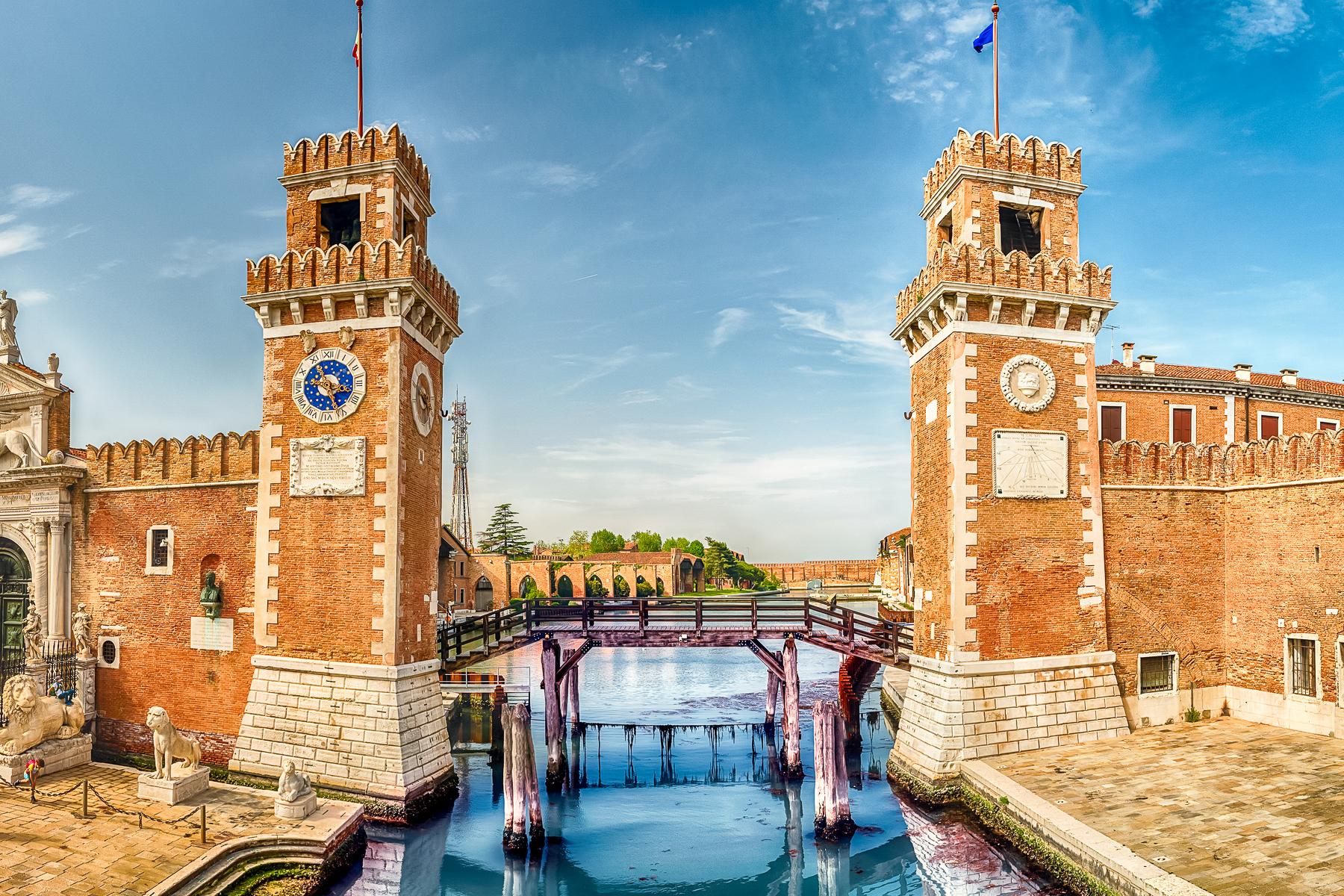 For centuries, the colossal Arsenale complex of shipyards, warehouses, and armories was Europe’s largest military-industrial compound, a testament to the might of the Venetian Republic. Although many areas are still cordoned off as military zones, the southern side of the Arsenale is open to the public during the city’s famous Biennale di Arte, coming alive with the world’s artists and their admirers.

INSIDER TIPFor some creepy tales about the Arsenale and Venice, check out the books of Alberto Toso Fei, including Venetian Legends and Ghost Stories.