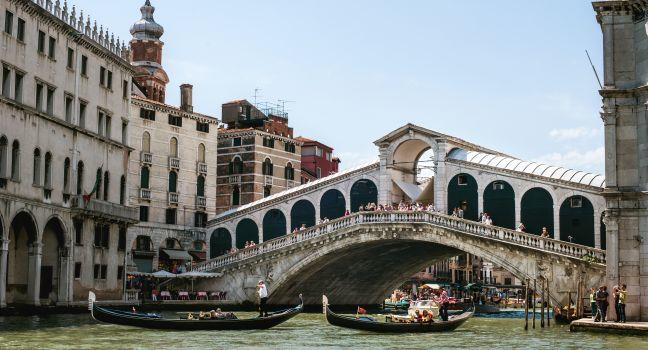 The competition to design a stone bridge across the Grand Canal attracted the best architects of the late 16th century, including Michelangelo, Palladio, and Sansovino, but the job went to the less famous (if appropriately named) Antonio da Ponte (1512–95). His pragmatic design, completed in 1591, featured shop space and was high enough for galleys to pass beneath. Putting practicality and economy over aesthetic considerations—unlike the classical plans proposed by his more famous contemporaries—Da Ponte's bridge essentially followed the design of its wooden predecessor; it kept decoration and cost to a minimum at a time when the Republic's coffers were low, due to continual wars against the Turks and competition brought about by the Spanish and Portuguese opening of oceanic trade routes. Along the railing you'll enjoy one of the city's most famous views: the Grand Canal vibrant with boat traffic.

Book an Experience at Venice VIEW ALL