Despite a global pandemic, the historic Neapolitan tradition of the caffè sospeso will likely continue for years to come.

Inside the Gran Caffè Gambrinus, an elegant 160-year-old cafe a stone’s throw from the Bay of Naples, an old, oversized Neapolitan coffee pot sits in one corner. Despite being the oldest and perhaps grandest cafe in the historic Italian city, replete with extravagant chandeliers and gilded stucco in its belle-époque rooms, a local version of this kind of container can be found in almost all homes around Italy.

Unlike those essential domestic appliances, however, the difference at the Gran Caffè Gambrinus is that its giant brass pot is tilted open, the lid gaping like a mouth. There’s an important reason for it: so that clients can drop receipts inside. Not in the sense that it is an overblown trash can, but, instead, so that they can participate in the city’s age-old coffee tradition of caffè sospeso, or the suspended coffee.

The practice of caffè sospeso is a Neapolitan tradition that was born in the late 1800s in the center of the city and that boomed during World War II. Originating in the many working-class cafés of Naples, where someone would order a sospeso—paying the price of two coffees but consuming only one, leaving the other to be suspended until later. Anyone could then ask whether there was a sospeso available and would be served a coffee for free.

“It’s a tradition handed down orally by grandparents and parents,” says Sergio Arturo, one of the owners of Gambrinus. “There are different versions of how it began. Some say nobles shared the joy of having won a game of horse jousting or having met a beautiful young lady by going to coffee shops and paying for two coffees, one for themselves and one for a stranger.”

At the Gambrinus, their potent, sugary espresso is a mixed blend that comes from Nicaragua and is served in a unique way that sees the coffee spooned across the top of the cup not only for the ceremony, they say, but also to reduce the chance of a burnt tongue. According to Arturo, all kinds of locals leave the tokens, and there are also those, like the President of Naples, who come and pay for 50 euros worth of sospeso at a time. 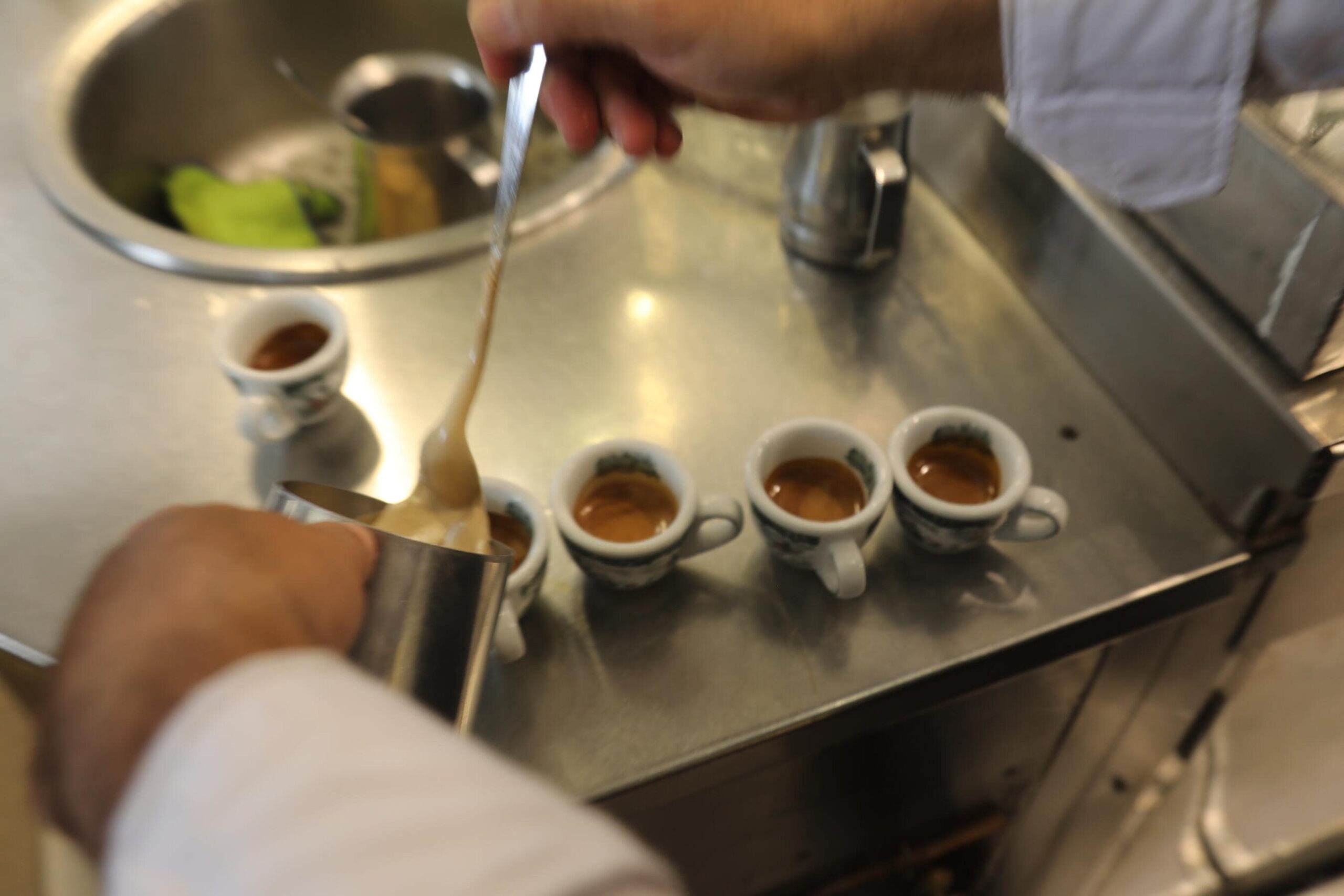 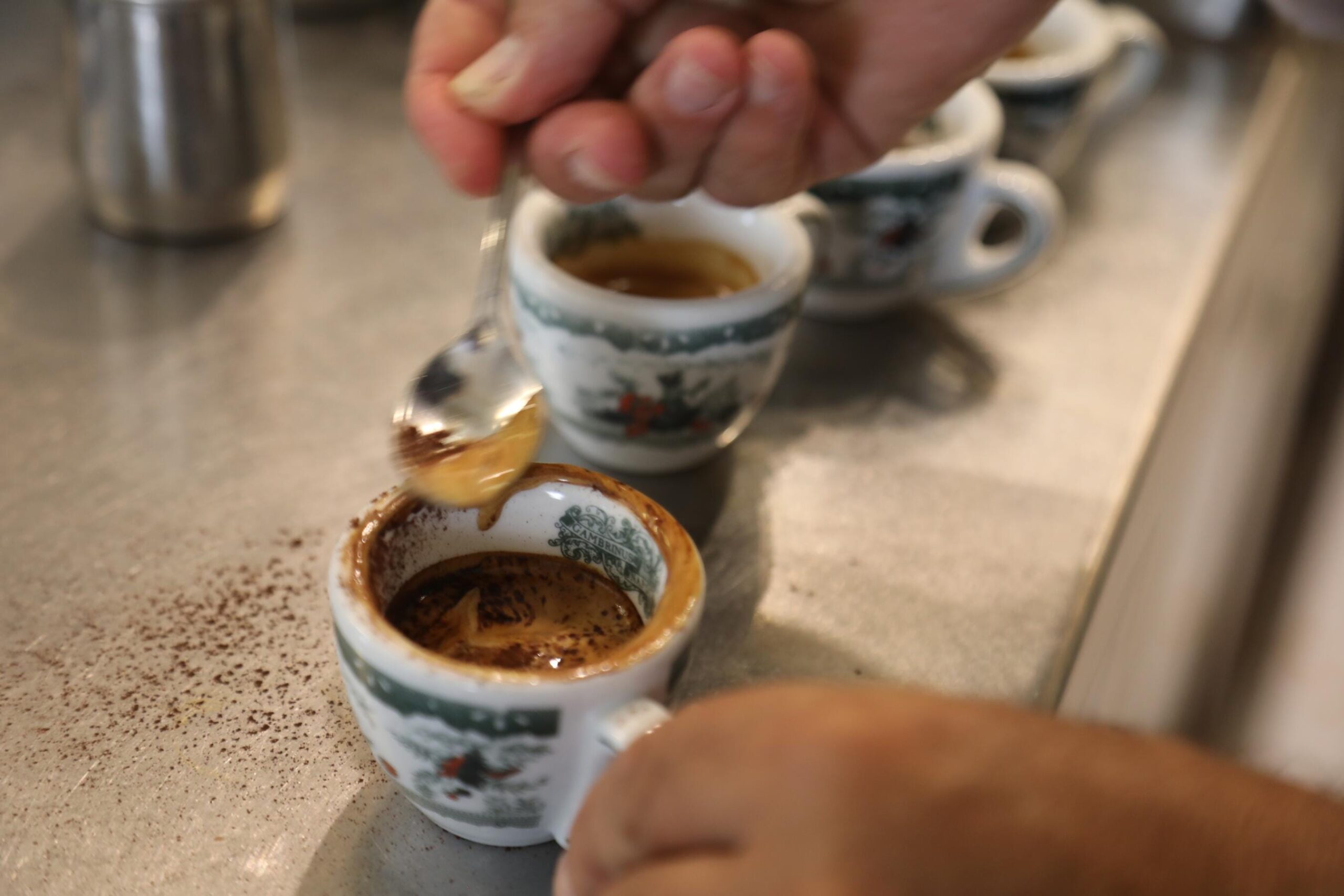 1. At Gambrinus coffee is spooned across the top of the cup.Peter Yeung

But Gambrinus is far from the only place offering caffè sospeso, the practice of which has been revived in recent years during hard economic times and particularly through the ongoing period of the coronavirus pandemic. A group of coffee shops across the city now belong to the Suspended Coffee Network, with a day of celebration marked out for each year on December 10. The movement has come to embody a spirit of solidarity.

“Caffè sospeso is the first step of solidarity to those who don’t get a chance to have coffee,” says Pino De Stasio, the owner of Bar 7Bello, a coffee shop along the Via Benedetto Croce in the historic center of Naples that has been offering sospeso coffees since 1969. “It is the symbol of a network of solidarity between citizens who can afford it and those who need it, like the homeless or underprivileged immigrants.”

All along the cobbled stones of the Spaccanapoli—a historic street that cuts right through vibrant heart of the city—or at least small alleys running off it, there are bars offering the sospeso, like the Caffè San Lorenzo, the Caffè Svelato, and the Caffè Letterario Intra Moenia. “It’s a beautiful gesture,” says Anna Gas, owner of Bar Nilo, which also is a hub for caffè sospeso. “It says a lot about the Neapolitans. We take care of each other.”

It’s such a part of the fabric of the place that Italian writer Luciano De Crescenzo once wrote that, “When a Neapolitan is happy, for some reason he decides to offer a coffee to a stranger because it is like offering a coffee to the rest of the world.”

But since the pandemic struck Italy at the beginning of the year, Naples, and particularly its impoverished residents in the historical center, were hit very hard. It’s since seen the spirit of the caffè sospeso evolve and adapt into something new. During the first lockdown, running from March to May, those who could work left pizza, pasta, and sweets to doctors, nurses, and COVID patients.

The concept of “suspended baskets”—where poorer residents would leave baskets hanging from their homes in the hope of food being left by kind strangers—became a phenomenon with the guiding phrase: “Those who can leave, who can’t take.”

Individual initiatives began to pop up all around town. Feltrinelli, one of Italy’s largest bookstores, began to encourage customers to buy a book and leave it for readers who couldn’t otherwise afford them. Likewise, the critically-acclaimed pizzeria Da Concettina ai Tre Santi is now giving out pizza sospeso to the poor. They handed out 6,000 margherita and marinara pizzas during the lockdown and continue to deliver around 15 pizzas to the poor each week.

“With this simple product, only with water, flour, salt, and yeast, we managed to do something positive for our city,” says Ciro Oliva, the fourth-generation chef. “This simple dish brings a smile to those in difficulty. That’s all we wanted to achieve.”

With no sign of the coronavirus pandemic nearing an end, the historic Neapolitan tradition of the caffè sospeso, built on generosity and togetherness, seems set to continue. It likely will for years to come. “It’s just a small gesture,” adds Arturo of Gambrinus. “But the value is symbolic. It means we are together as one.”

Nobody sane wants to hurt elephants or support their torture, and articles like this show us how to avoid doing that. Thank you Fodors!