The varied landscape of France offers cities and regions to charm nearly every type of traveler—Paris for romantic urbanites, Cannes and Nice for the glamorous set, Burgundy and Bordeaux for oenophiles, the Pyrenees and Alps for outdoor adventurers. But the gentle Loire Valley, just a few hours southwest of Paris, tends to hover just under the radar of many foreign tourists, which is a serious oversight. This rolling countryside is studded with spectacular medieval and Renaissance castles (plus award-winning vineyards, luxurious hotels, and Michelin-starred restaurants) that will ignite the most jaded imaginations.

Before Louis XIV took up permanent residence in Versailles in 1682, there was no centralized court for French kings. Instead, from the medieval era and especially through the French Renaissance of the 16th century, kings and other royal figures built châteaux all over the country, moving from one to the next every few months as they ruled and warred over the many independent regions. With its strategic river access, fertile soil, central location, and easy proximity to Paris, the Loire Valley emerged as the preferred royal neighborhood. A drive (or bicycle tour) through the valley today will leave you gasping in wonder at the seemingly endless parade of turreted fairy-tale castles. There are too many to list here, but the following is a sample of the many personalities of Loire châteaux.

The largest and most famous château in the region is Chambord, built over a 28-year span beginning in 1519. This castle displays the height of French Renaissance architecture, borrowing many elements from the Italian Renaissance—some believe Leonardo da Vinci, who died in nearby Amboise the year construction began, may have contributed to its design, which includes a famous free-standing double-helix central staircase. 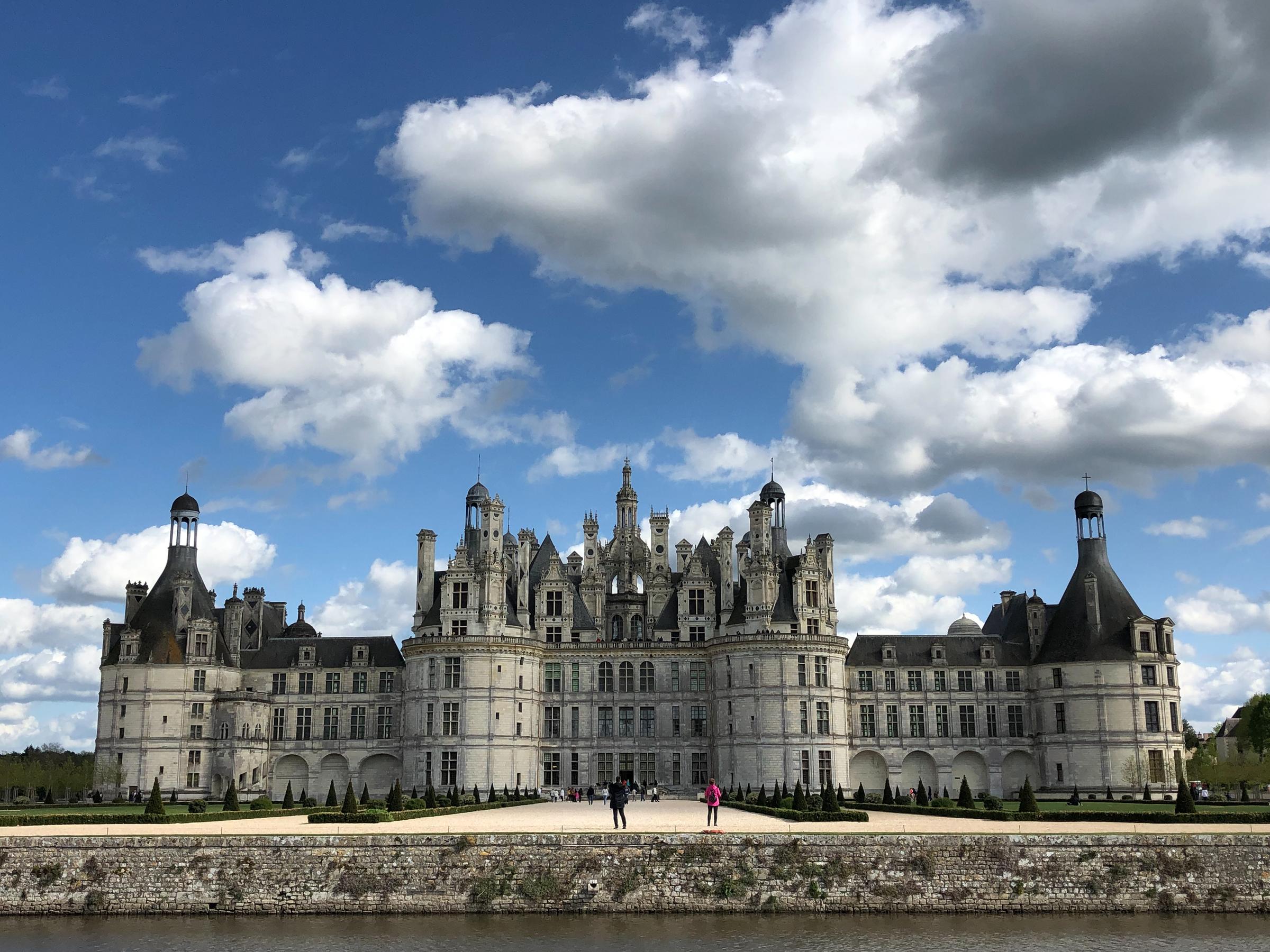 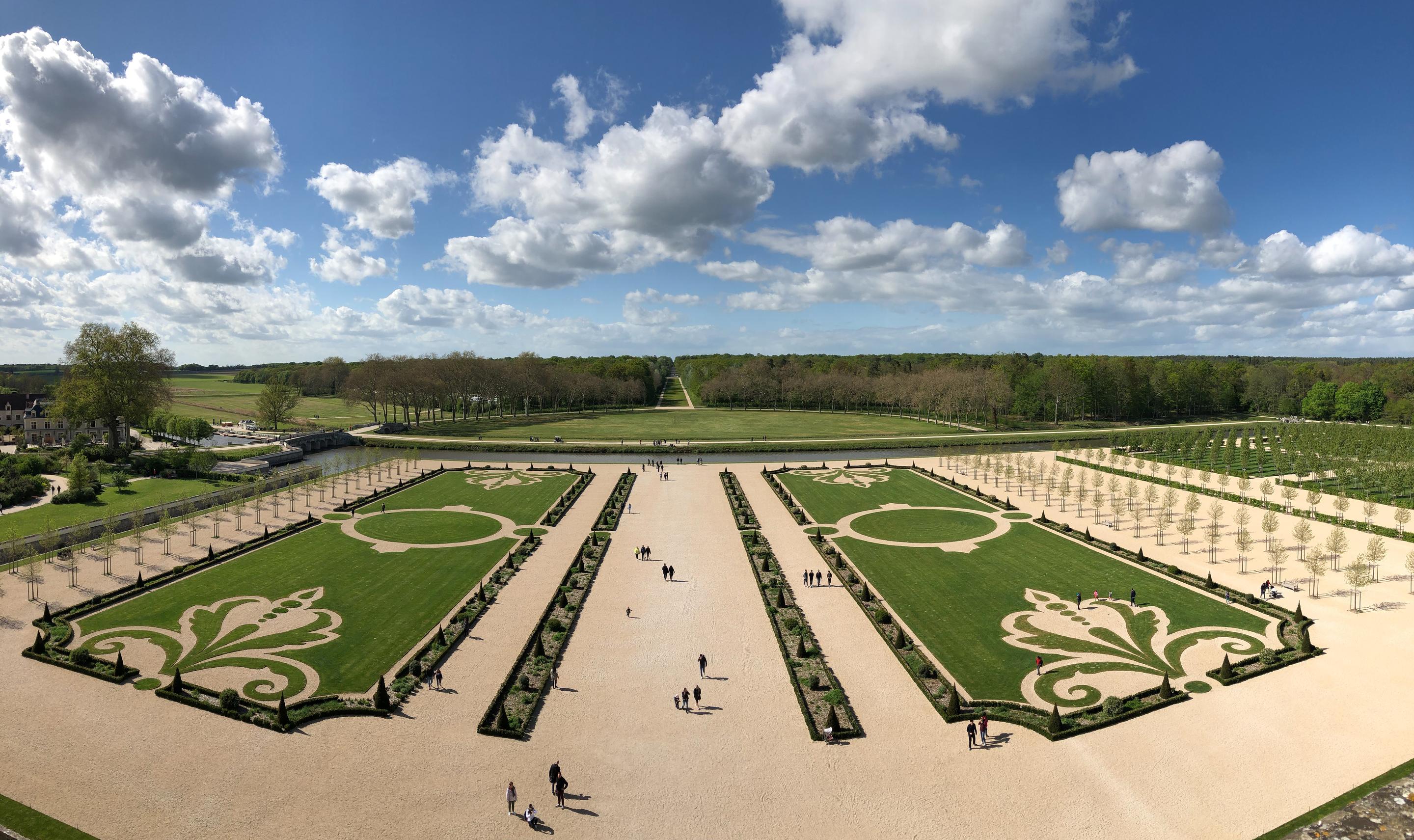 Despite the magnificently ornate exterior and beautifully groomed parklands, the château feels abandoned and unfinished; in fact, it’s both of those things, as King Francis I only built it as a hunting lodge and, primarily, as a display of power and wealth to his rival, Emperor Charles V. According to historical records, Francis I only spent about seven weeks there during his reign, and it was abandoned entirely for more than 80 years following his death, with only sporadic occupation in the centuries since. Now, more than 700,000 visitors a year tour its empty rooms and climb to the roof, which, with eleven different styles of towers, has often been compared to the skyline of a city.

As befits its original role as a hunting lodge, Chambord is a bit out of the way. Visitors who plan ahead can spend a few days as next-door neighbors to the château at the Relais de Chambord, a chic, modern boutique hotel literally a stone’s throw from the huge castle. If you can’t score a room for the night, the hotel’s Grand Saint Michel restaurant provides an elegant respite from a day of sightseeing.

Originally built in the 10th century and largely rebuilt throughout the 15th century, Chaumont is only a fraction of the size of Chambord but is still a commanding and somewhat forbidding presence perched at the edge of a bluff overlooking the Loire River. Its strategic location helped protect the castle and its village during feudal times. In 1550, Catherine de’ Medici, with her husband, King Henry II, acquired the castle from the Amboise royal family and lived there until Henry’s death. During Catherine’s tenure at Chaumont, she hosted numerous famous astrologers, including Nostradamus.

Today, the château itself is largely unchanged, but the grounds have evolved and are a tourist attraction in their own right. The formal gardens are a draw year-round, but they really come alive between April and November, when gardeners and landscape artists from around the world compete in the International Garden Festival. Each artist (or team of artists) transforms their little plot of land to fit that year’s theme; for 2019 the theme is Paradise. The château’s Centre for Arts and Nature livens up the surrounding park as well as the estate’s buildings with exhibitions of commissioned work from noted contemporary artists.

One of the most popular and striking castles in the valley sits astride the Cher River, a tributary of the Loire. The estate of Chenonceau dates to the 11th century, but the current château was built starting in 1514, and today stands as one of the finest examples of early Renaissance architecture in the country; in 1547, King Henry II purchased it as a residence for his mistress, Diane de Poitiers, while he and Catherine de’ Medici were living at Chaumont. After Henry’s death, in 1559, Catherine claimed Chenonceau as her own primary residence, forcing Diane to move to Chaumont. Catherine expanded the already famous formal gardens (maintained in historically accurate splendor to this day) and hosted a series of lavish events there, including the first fireworks display ever held in France. 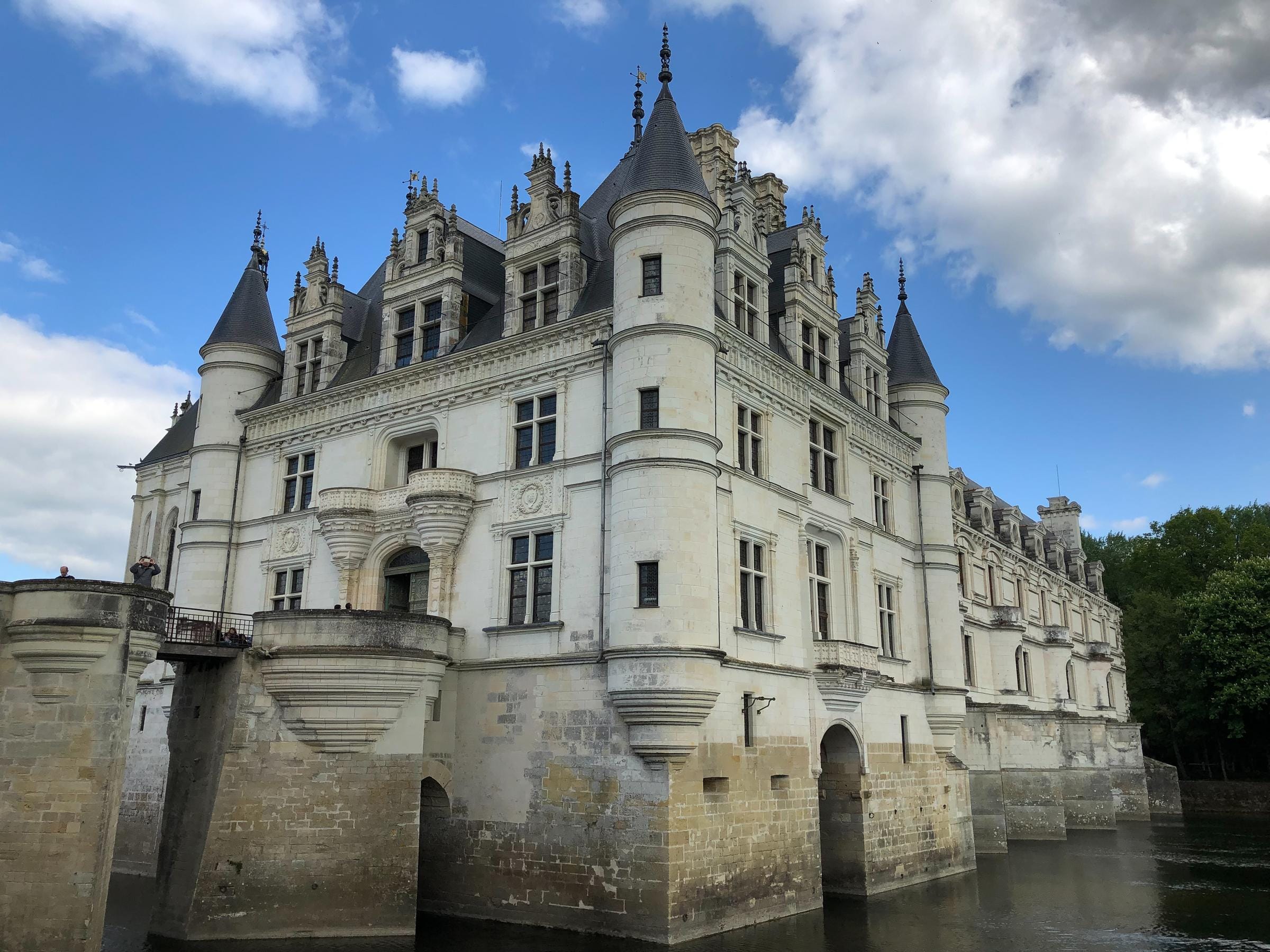 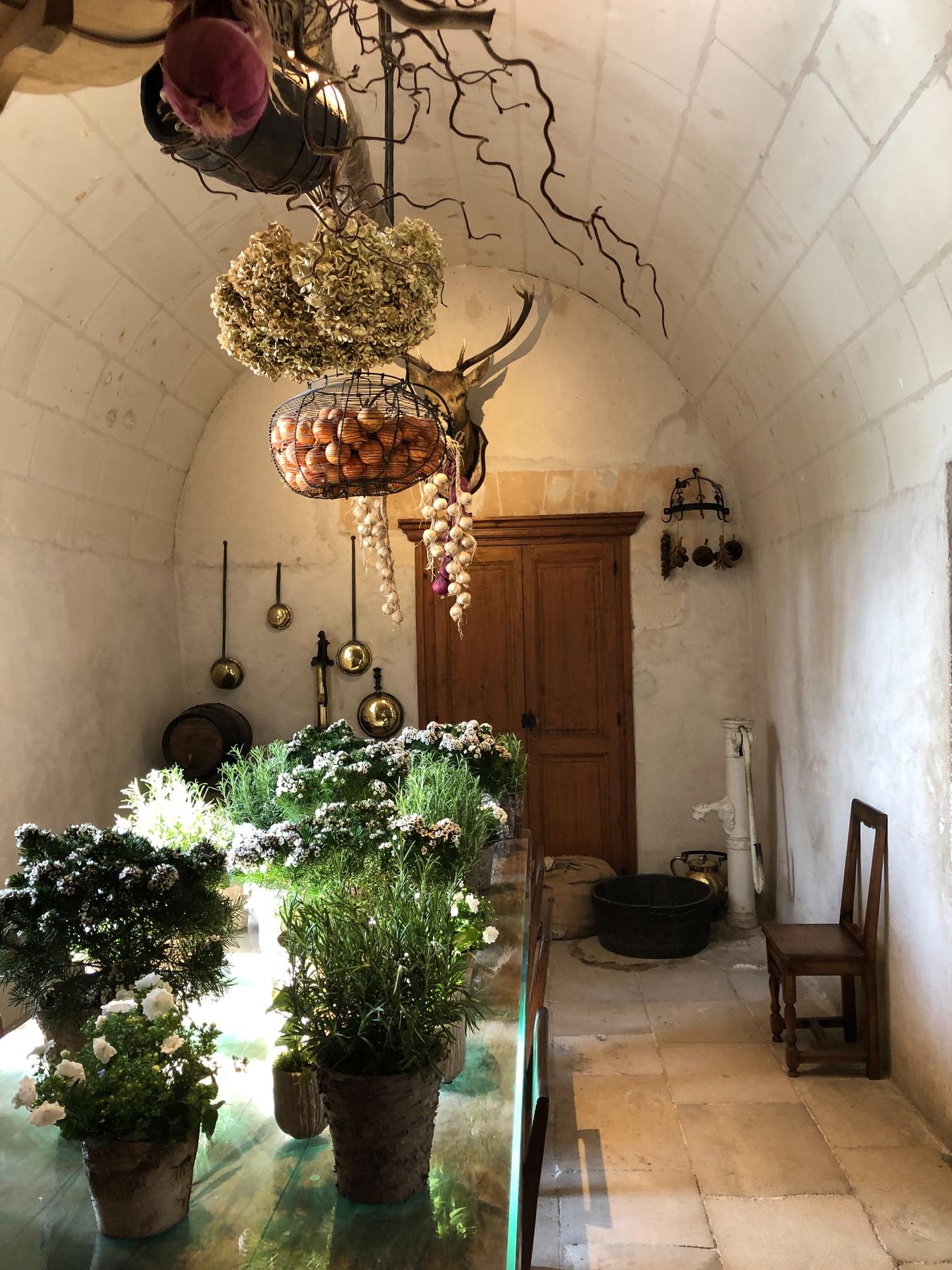 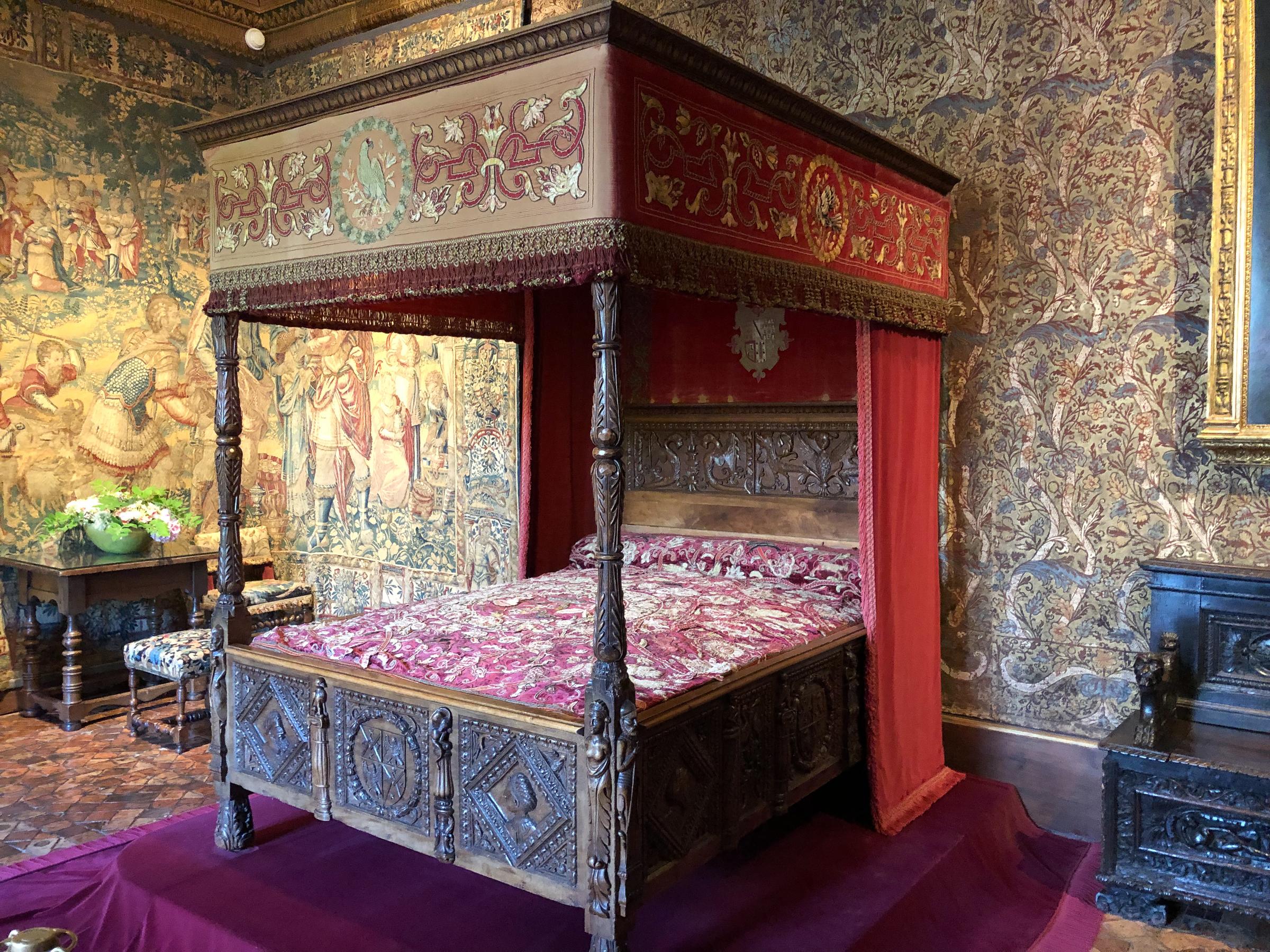 For the next three centuries following Catherine’s death in 1589, occupation or ownership of the château remained in the hands of women, who all put their personal stamps on the property. Since 1913, the estate has been owned by the Menier family, who have meticulously restored the house and gardens after years of damage by wars and floods.

At one point in its history, Château de Cheverny was the third house of the Henry–Catherine–Diane love triangle, when Henry first presented the estate as a gift to his mistress. But, as Diane preferred the much more charming Chenonceau, she sold Cheverny to Philippe Hurault, who built the present graceful manor house in the early 17th century. As is the case with most châteaux, the estate has changed hands many times through the ups and downs of war, revolution, and personal fortunes; today, it is privately owned and operated by the de Vibraye family, who acquired it in 1914 and opened it to the public in 1922.

The home is renowned for its formal gardens and interiors swathed in Flemish tapestries and Aubusson textiles, but two of its biggest draws are outside of the house. First, crowds gather each Monday, Wednesday, Thursday, and Friday at 11:30 am to watch the kennel master feed the château’s famous pack of 100 hunting dogs. The tricolored hounds are a sight to behold as they stream, baying at the top of their lungs, from the kennel toward the feeding trough in their exercise yard. 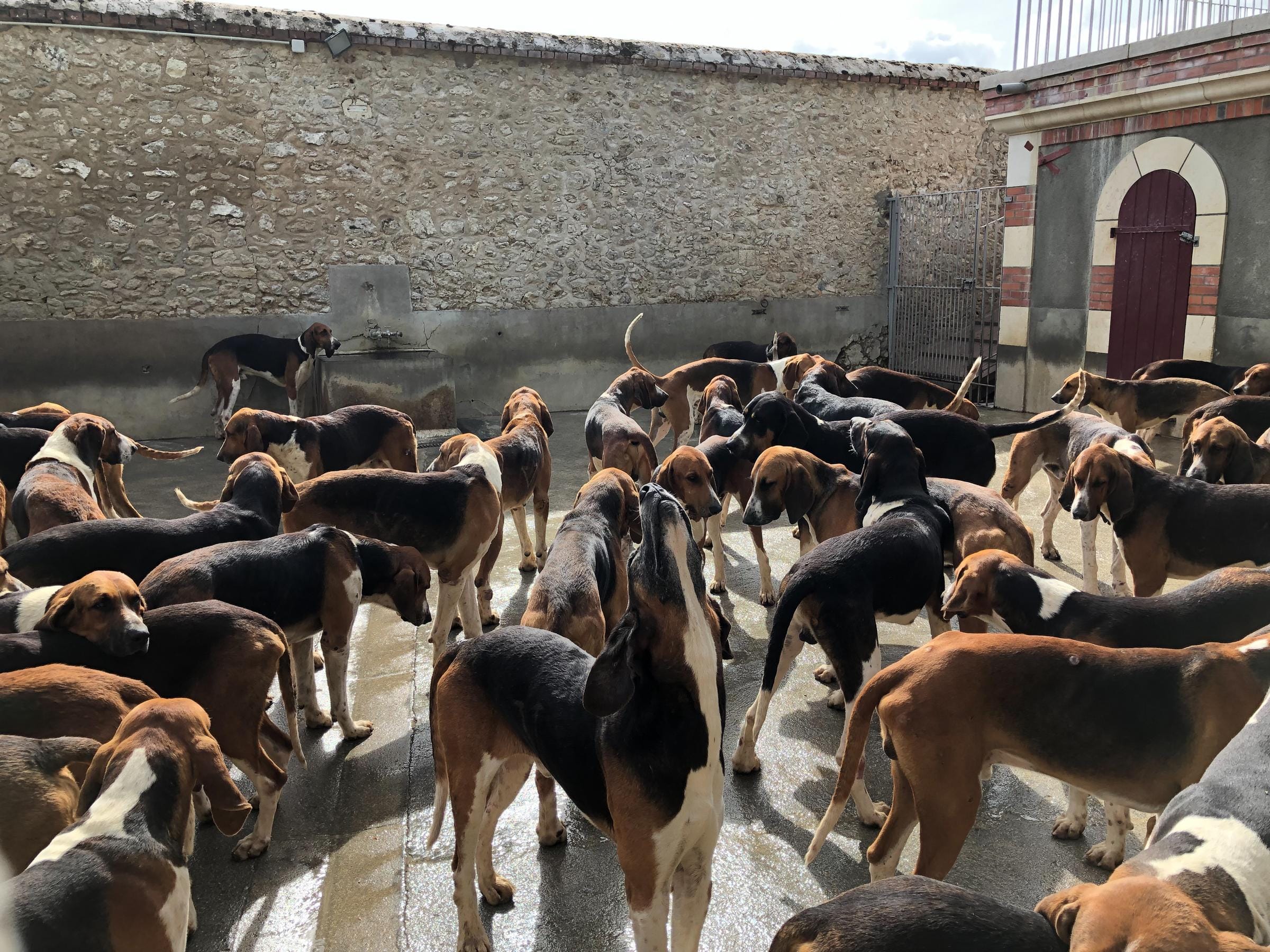 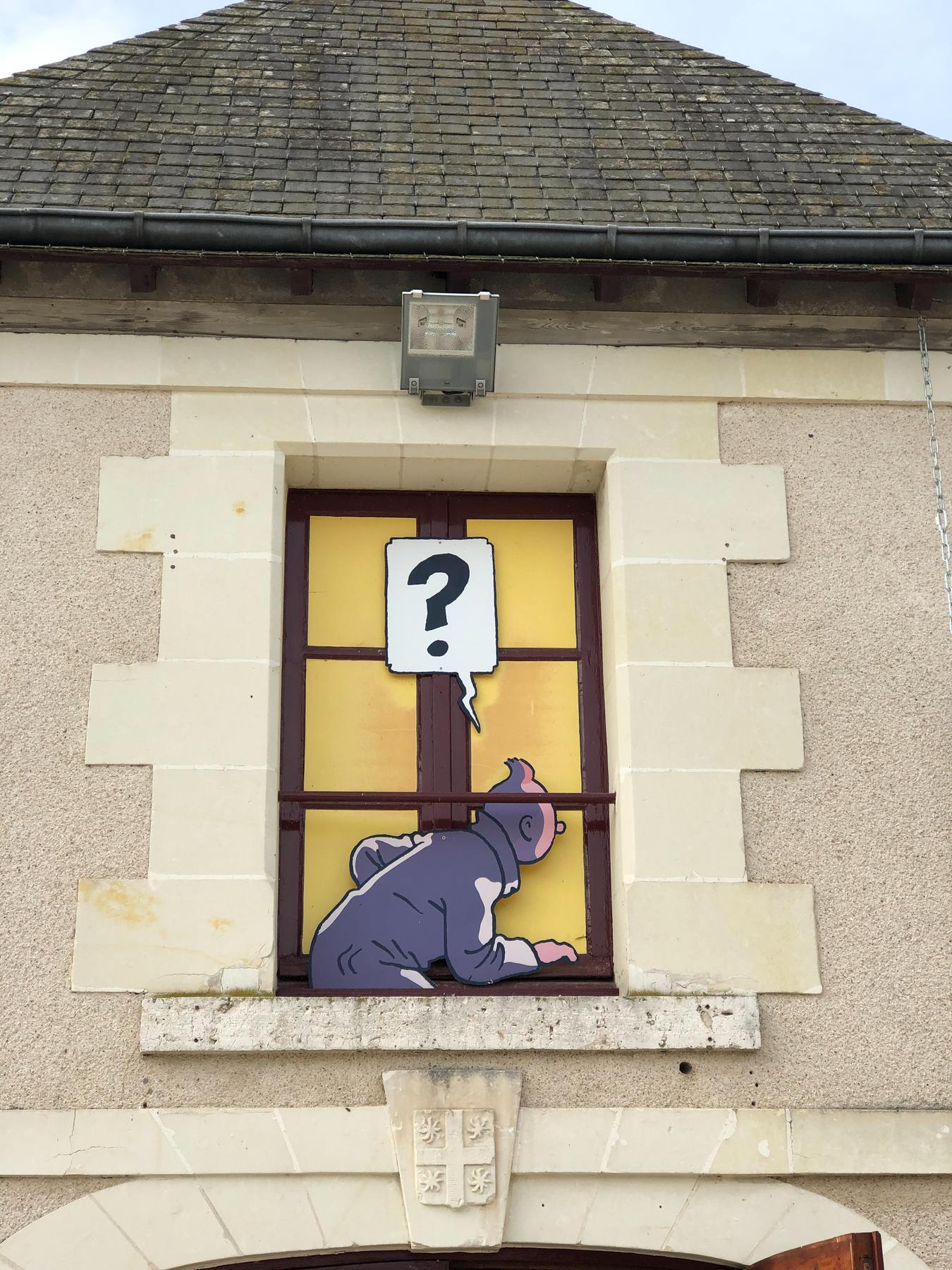 And fans of vintage European comics (who isn’t?) are also in for a treat, as many will recognize Cheverny as the model for Marlinspike Hall from Belgian artist Hergé’s Tintin books. A section of the old stable has been converted into a permanent exhibition called The Secrets of Marlinspike Hall, where visitors can walk through life-size vignettes from the famous comics about the boy detective and his faithful little white dog.

One of the more modest châteaux in the Loire Valley is actually one of the most culturally significant. In 1516 King François I invited Leonardo da Vinci to move from his home in Florence to the modestly handsome Château du Clos Lucé, at the edge of the small city of Amboise. Here the great artist, scientist, engineer, and inventor spent the final three years of his life, sketching in his workshop and planting his gardens. His tenure in France is widely considered to be the beginning of the French Renaissance (it also brought the Mona Lisa and Virgin of the Rocks to the collection of the Louvre). Visitors to the château can browse his workshop as well as interactive exhibits of his visionary inventions. Just down the street is the imposing Château d’Amboise, where the king lived. Da Vinci’s remains are interred in a small chapel on the larger castle’s grounds, where people can pay their respects.

Amboise has a number of nice accommodations, but for historic charm and central location, the Clos d’Amboise is hard to beat. The guest rooms of this sumptuously restored 17th-century manor are unusually large by European hotel standards and each is uniquely furnished, lending to the illusion of being a guest at a private mansion. The cozy bar and restaurant on the ground floor are ideal for a civilized nightcap and a leisurely breakfast.

Rising from farmland a bit off the beaten tourist path is the Château du Rivau, a small but historically significant medieval castle about an hour’s drive southwest of Tours. Built in 1420, in the waning days of the Hundred Years’ War, the castle and stables became famous for the quality of the warhorses bred and trained there, so much so that Joan of Arc visited in 1429 to acquire horses for her troops before riding in to end the nearly year-long British siege of Orléans.

Under the stewardship of the venerated Beauvau family, Rivau continued to supply horses to the royal family throughout the Renaissance; the castle’s enormous stables, which date back to 1510, were built by François de Beauvau, a captain of King François I (who brought Leonardo da Vinci to live in Amboise just a few years later). The château remained in the family until the end of the 18th-century and then, as with so many of the castles in the region, changed hands a number of times and had fallen into serious disrepair by the early 1990s. The Laigneau family acquired the property in 1992 and embarked on a meticulous 18-year restoration of the castle both as a museum/historic site and a private residence (the family lives in the castle part-time). While the structural upgrades to the castle are historically accurate, the château and estate are infused with a sense of whimsy and modernity. The surrounding gardens and woodlands (presided over by five extremely vocal peacocks) are filled with modern sculptures and children’s play areas, and the public rooms of the castle display a fascinating mix of period-appropriate furnishings mixed with commissioned contemporary art that pays homage to the castle and its history. 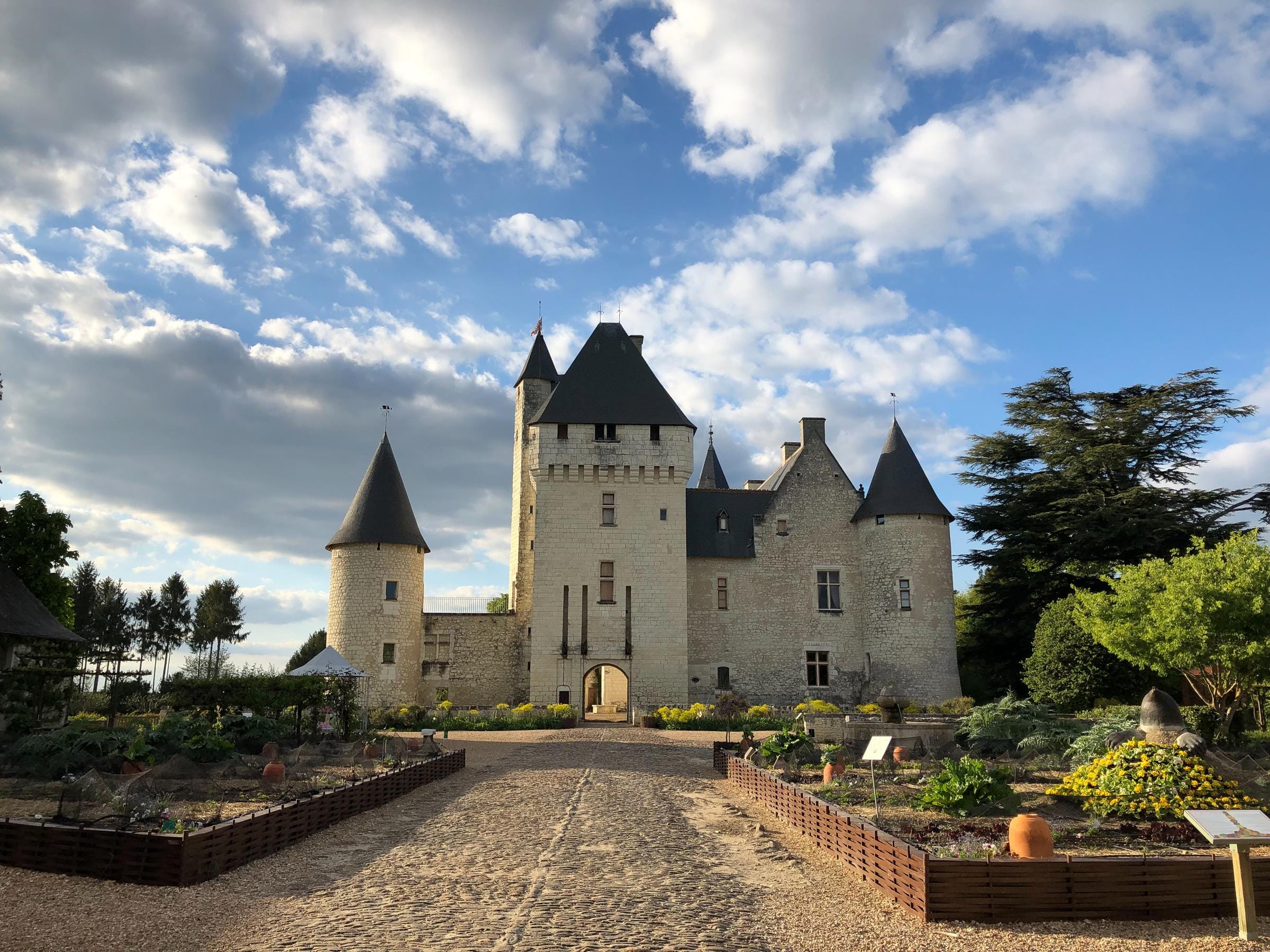 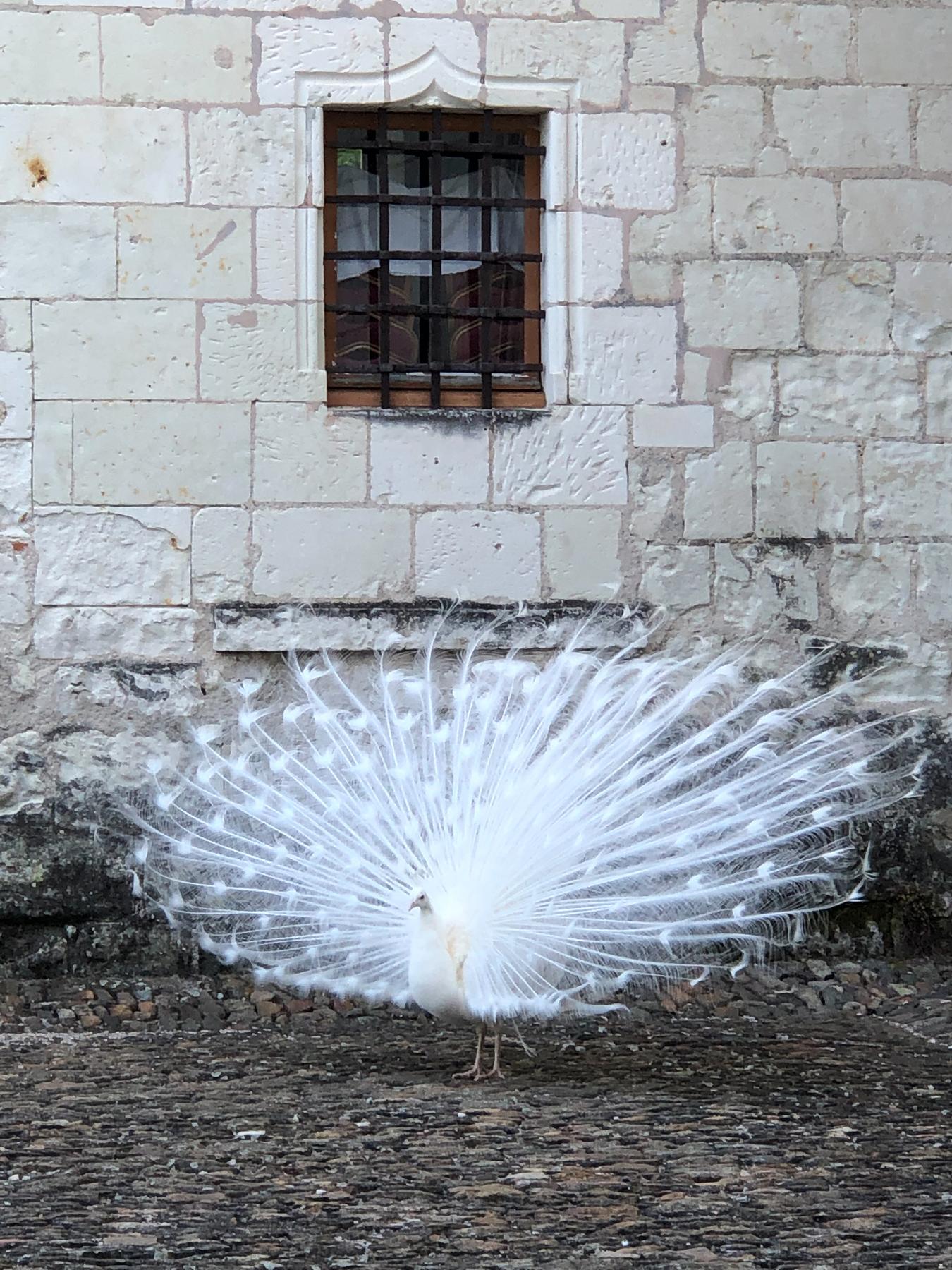 The most recent stage of restoration has converted a section of the stables into seven luxury guest rooms, which opened in September 2018. With so few rooms, it’s necessary to book fairly far in advance, but it’s a perfect opportunity to fulfill the fantasy of sleeping in a castle.

How to See It

The larger towns of the Loire Valley are served by fairly frequent trains from Paris, but since many are in the middle of large estates outside of their associated towns, it’s best to rent a car if you want to tour on your own schedule. For those who prefer a bit more structure and service, many local travel agencies offer tours of the region. Val de Loire Travel is a good place to start for group and private tour services. For a slower touring pace, or if you need to work off the decadent French meals, the valley is crisscrossed by an extensive network of safe, well-marked bicycle lanes.

The Loire Valley, like Paris, is pretty much always a good idea, but 2019 is even better, as the entire region is collaborating on multifaceted cultural events and exhibitions throughout the year to celebrate the 500th anniversary of the French Renaissance. A comprehensive guide can be found here.

The Loire Valley is very handy to Paris, and numerous cities offer nonstop service at reasonable fares throughout the year. Budget carrier Norwegian Air continues to be a leader in affordable trips abroad; recently they have expanded their service to Paris, with September and October fares under $400 from several East Coast cities, and $500 from the West Coast, with prices dipping even lower in the winter. Norwegian is noted for having one of the newest fleets in the business, and surprisingly comfortable economy seats. But travelers should keep in mind that, as with most economy fares, extra costs (choosing a seat before check-in, checked bags, on-board meals) add up quickly. In addition, Norwegian does not allow self-service check-in (online or at airport kiosks) for direct flights between the U.S. and Europe, so even if you’re not checking a bag, you will have to stand in the full check-in line in order to receive a boarding pass, so be sure to allot enough time before your flight.