Drift down this icy arctic river in Finnish Lapland for the ultimate adrenaline rush.

Chunks of sleet crunch underneath heavy boots. Labored breath turns to a cloud of frosty mist. A trail of trekkers weaves between the trees, their headlamps piercing the inky black sky. It’s 3 p.m., but the sun has already set this far north in Finland, where there are only a few hours of light in the winter months.

Out of the eerie silence comes the dull rumble of rapids, which turns to a roar when the group breaks out of the forest. The riverbank is a slippery slope, awaiting the next careless misstep as they stumble and slide to the edge of the brook. The guide wades into the water, instructing those following to avoid the sharp rocks lurking in the murky mud below. A splash and a squeal erupts from a fallen comrade, startling another, who drops like a domino. The current sweeps them up one by one, hurtling the bobbing bodies away from each other until they’re all alone in the arctic.

A splash and a squeal erupts from a fallen comrade, startling another, who drops like a domino. The current sweeps them up one by one, hurtling the bobbing bodies away from each other until they’re all alone in the arctic.

This is “river floating” in Finnish Lapland.

The activity originated two decades ago in Kemi, Finland, aboard the Sampo icebreaker ship in the Gulf of Bothnia. The massive steel vessel cuts through icebergs and cruises to a safe, contained area, where travelers suit up and jump in for a quick swim. Adventure companies in Ruka—Finland’s most popular ski resort town just 20 miles from the Russian border—were inspired to up the ante by offering a river floating experience that’s not only more challenging to control speed and direction, but can also be done in the dark. 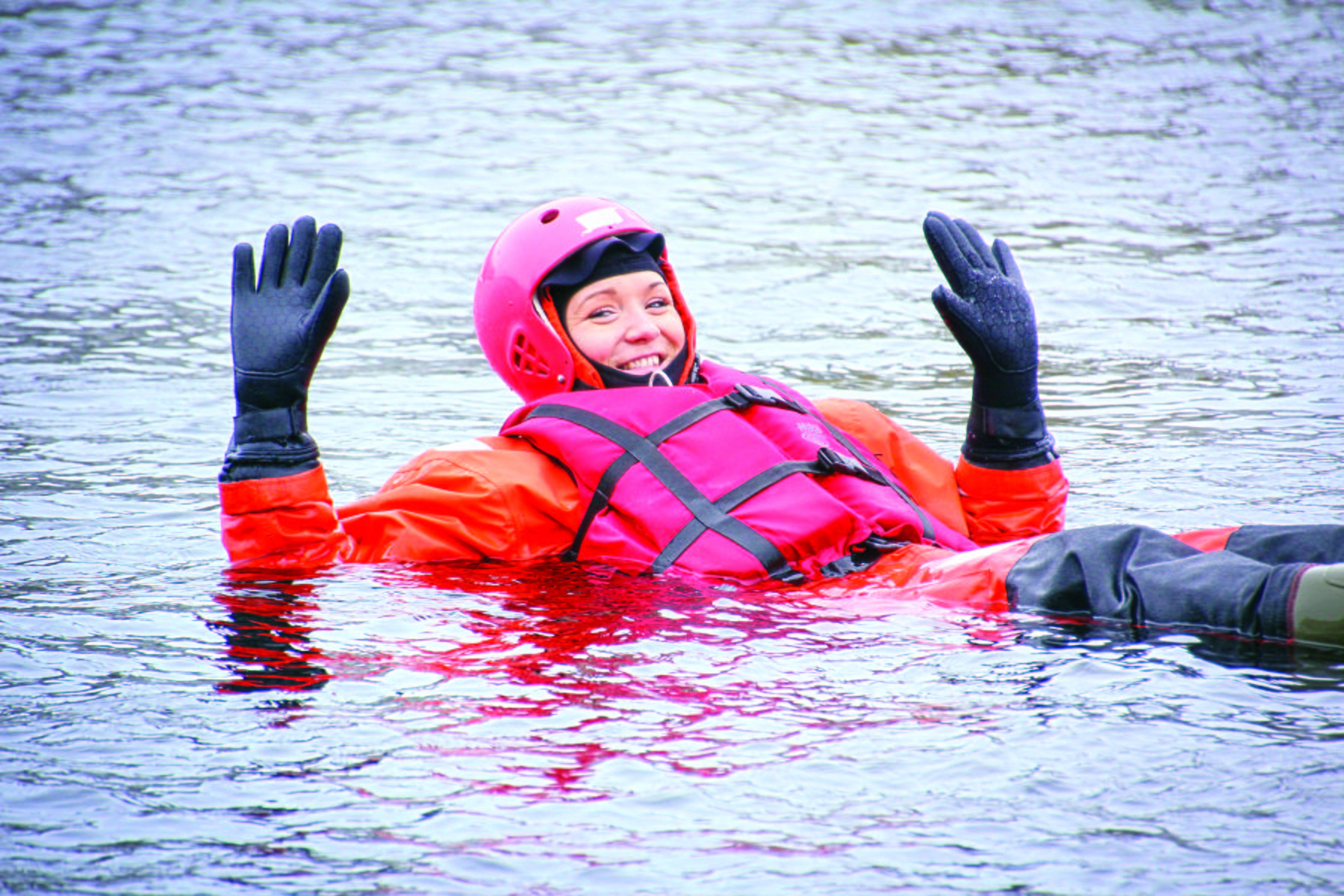 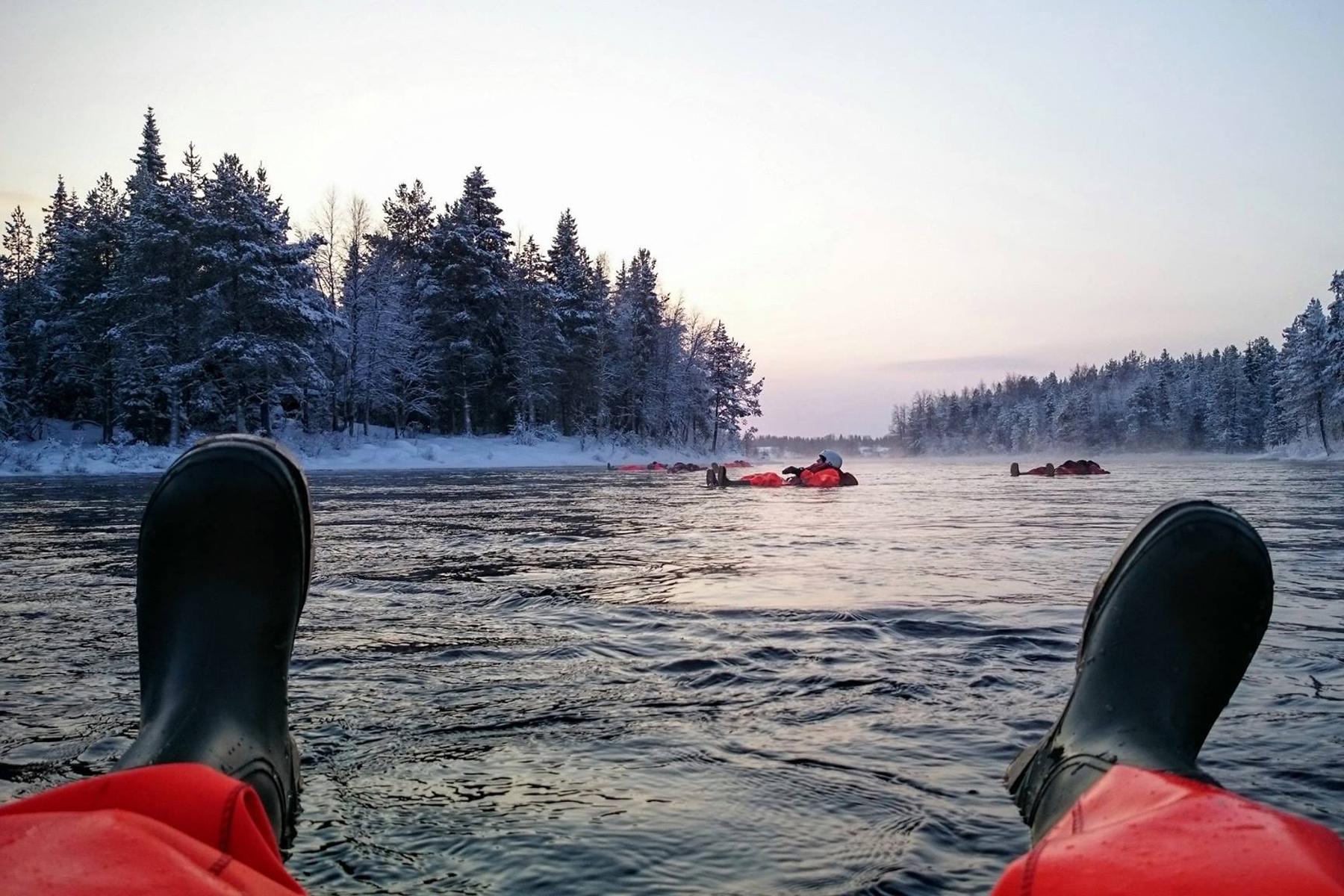 Before starting out, everyone is fitted in five onion-like layers that’ll keep them warm and buoyant. First, they’ll wiggle into thermal overalls, drysuits, and woolen socks before zipping on waterproof suits with rubber boots, neoprene gloves and hoods, lifejackets, and helmets. Their eyes are the only bare skin that’s open to the elements.

Thrill-seekers can opt for two different river floating excursions. Both take around two to three hours, including a hike and two 15-minute floats. During the day journey, the group walks across a frozen lake, taking in the snowy landscape, unaware of the ice thinning beneath their toes. When they least expect it, a crack shocks them as they plunge through the glacier and drift downstream. The evening trip is more heart-pounding because the water can dip to a frigid -22 degrees. Midway through the expedition, the leader calls out to turn off the headlamps, so they are floating in the pitch black and spinning in starfish position, while periodically surging head first. If there are clear skies, the northern lights can be seen swirling above.

Between the sets of rapids, there are calm, slow stretches, where the float turns peaceful and meditative. The waves lap softly against the side of the suits and shooting stars twinkle above the treetops. It’s easy to lose a sense of time and space, which makes it all the more jolting when gruff hands grab on as the guide hauls each soaking passenger against the current and back to land. 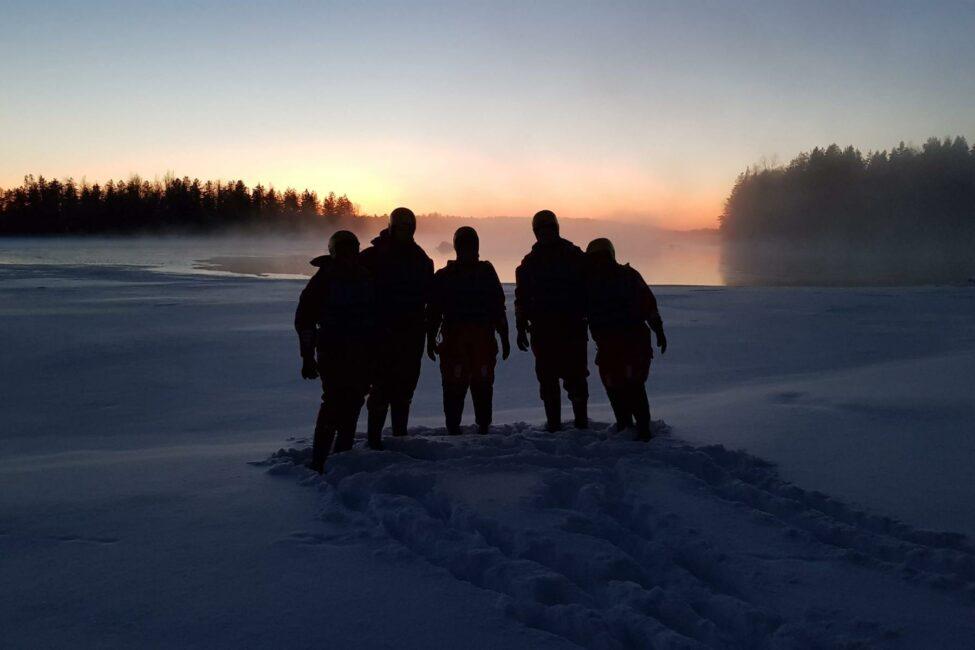 Trips depart from Ruka, Finland, and the bus ride to the river takes roughly 10- 20 minutes. Ruka is a quick hour flight or a 9-hour drive from Helsinki. River floating companies include Ruka Adventures, Ruka Safaris, and Rukapalvelu.

Transportation, whether by bus, snowmobile, or ATV quad, is provided. All gear—such as suits, life jackets, and helmets—will also be supplied, and a place to change and store belongings is available. Some outfitters offer a hot drink after the trip.

It’s best to wear fleece-lined leggings or thermal layers and activewear. Clothes will not be getting wet, so you don’t need to bring a spare pair. The instructors may joke about packing a swimsuit, but it is not necessary unless you want to hit the sauna to warm up afterward.