Beware the creatures of the night when traveling in Yorkshire.

The English county of Yorkshire has a fascinating nocturnal history of ghosts, vampires, and smugglers. Over 1,000 ghosts are said to haunt the historic city of York, which is not surprising given its violent history of battles, Roman legionaries, Viking marauders, and riots.

Ghost numbers have risen dramatically since the arrival of the Ghost Merchants within the atmospheric medieval Shambles near the great Cathedral. Approaching the shop is like stepping back over two hundred years. Passing through the oak-paneled door, the ticking of a grandfather clock in the corner is the only sound. A smartly-dressed gentleman complete with a bowler hat, apron, and waistcoat suddenly appears, asking very formally, “Good Day. How can we help you?”

Peering down from the shelves are hundreds of ghosts in every imaginable color and shade. Just two types are sold–large and small. Peeping through the holes and cracks of a Cabinet of Curiosities reveals yet more tiny ghosts watching people dining, standing at windows, or hiding in a corner. 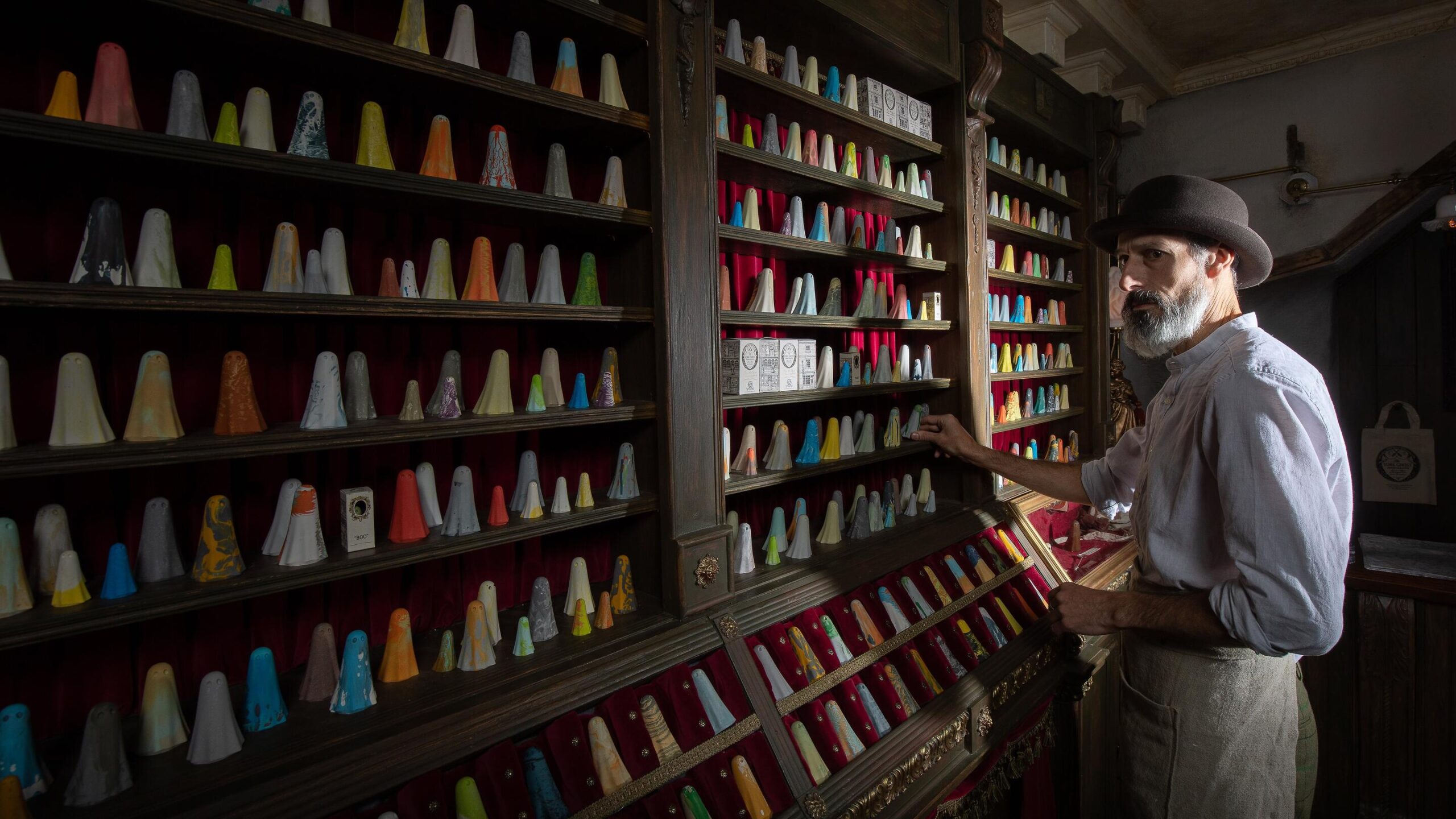 Sometimes customers know immediately which ghost is their perfect choice. Others may browse for an hour or more. Once chosen, the ghost is carefully placed on a hidden podium and photographed, before being carefully wrapped in tissue paper adorned with a map of 1850 York and placed in boxes resembling the store. As the customer walks towards the door, their ghost follows in the wagon of a model steam train trundling past the shelves ready for collection as they leave.

The Ghost Merchants say they are following in the footsteps of medieval pilgrims who would purchase badges to be taken into the local holy shrine for blessings. “They would buy a badge to prove they had been to York. These badges would have been made in a workshop above a shop in the Shambles,” comments Ghost Merchant David Bloodworth.

His fellow merchant, Angus McArthur adds, “Although their origins are shrouded in mystery, York ghosts seem to have followed a similar tradition, carved from oak and used as a protection from evil. The somewhat obscure legend of York Ghosts has continued over the centuries.”

The Ghost Merchants say they are following in the footsteps of medieval pilgrims who would purchase badges to be taken into the local holy shrine for blessings.

All the ghosts are made in the workshop above the store, ensuring every single one is totally unique. Work is always underway, and the Ghost Merchants can be glimpsed at work making ghosts as you pass by outside. Just as medieval guildsmen making pilgrim badges had a distinct identity, so do the Ghost Merchants have a crest, motto, and their own special clothing style.

Some of these York ghosts are long-distance travelers, as customers have taken them overseas to countries like Australia and the United States. From the moment the shop opened last year, the ghosts have been in demand, with queues waiting to buy.

In typical times, the Ghost Merchants’ offerings are complemented by activities including guided ghost walk tours, in which visitors amble the darkened streets late at night to hear tales of soldiers walking through cellars, of murders, and ghostly encounters. At Halloween, people usually come from all over the country to take part in a Great York Ghost Hunt, seeking out tiny ghosts peering from hidden nooks around the buildings and streets of this ancient city.

Even outside the city, visitors are not safe from potential nocturnal encounters. After all, the coastal town of Whitby is less than an hour’s drive away. Descending down from moors, there are glimpses of the dramatic abbey ruins high on the headland above the little harbor. Outwardly, it seems a peaceful setting–but novelist Bram Stoker’s imagination gave it a much more eerie atmosphere. One dark and stormy night, the most notorious of all vampires came ashore at Whitby when his ship ran aground. Bounding ashore, Dracula quickly snatched his first victim, old Mr. Swales, an elderly resident of Whitby. Taking the form of a great black dog, Dracula ran up the 199 steep steps leading to the abbey ruins and into the monk’s graveyard.

Countless films have since told the story of Dracula, filming in and around this iconic spot, recreating a world of vampires amid the windswept harbor and moors. The vampire links are even more evocative because it was in the town’s library that Bram Stoker first read the history book that included the name of Dracula.

Visit Whitby in the spring or autumn and you can be forgiven for thinking vampires and other dark creatures have overtaken the town. All around are people dressed in Victorian black, exaggerated white paint, and pointed teeth while others are carrying crucifixes. The cult of death and vampirism is at the heart of these seasonal Goth Festivals, usually attended by hundreds of costumed visitors drawn from far afield.

Countless films have since told the story of Dracula, filming in and around this iconic spot, recreating a world of vampires amid the windswept harbor and moors.

Even as the town begins to celebrate Christmas, there are demons around. The annual Krampus Run involves demons, devils, and strange creatures accompanying St. Nicholas through the town as they compete to be the one chosen to accompany him for the following year. Unwary children suddenly find themselves being chased by a Krampus as they giggle away.

Yet these are not the only nocturnal creatures to be found. The isolated, rugged coastline was once a thriving center for smugglers. Battles and disputes with men both at sea and on land were common as the smugglers sought to evade capture. It is said that on dark nights, when the mists drift over the moors, ghostly scenes may well appear.

For over a century, Robin Hood’s bay, less than 10 minutes drive outside Whitby, was a thriving center for smuggling activity. Even today it is a small village, built around steep narrow streets winding down to the jetty. No cars are allowed here, the streets are far too steep. Almost every family in the village was involved in the smuggling trade (it was very profitable). In 1777, a smuggling gang led by a man named Faggs operated a massive ship crewed by 40 men, often seen selling goods to colliers off the coast. When it was eventually captured, it was carrying 7,700 gallons of gin costing over £5,500 and tea worth over £3,000, according to local guide Paul Johnstone of Baytown Smuggling tours. 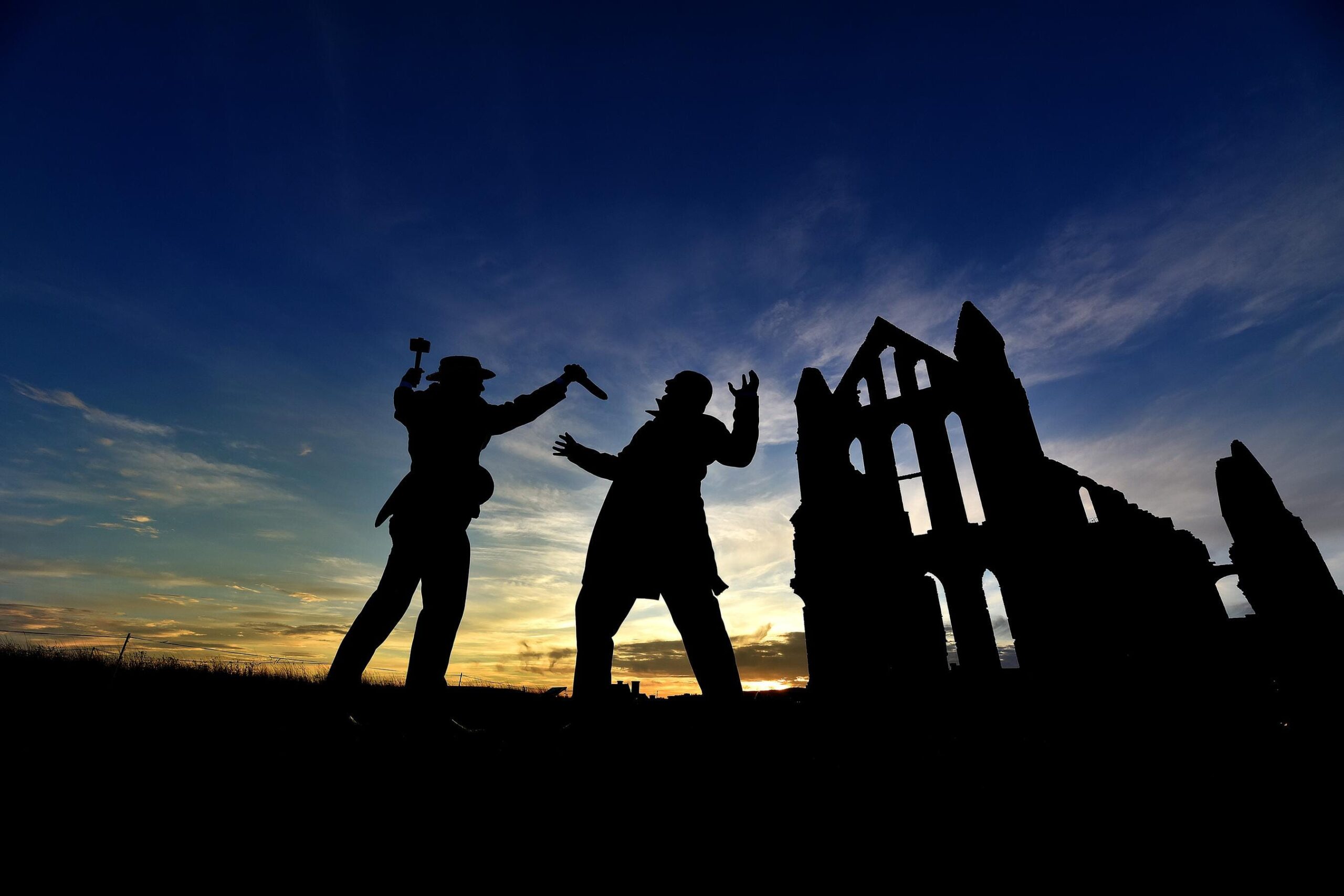 The closely-packed houses hid a network of secret, interconnecting cellars that formed the basis of smuggling activities. Smuggled goods landed on the jetty could be taken to the very top of the valley without ever seeing the light of day, before being whisked away across the moors, along tracks known as the Fish Road. It is said that many of the wives of fisherfolk at Robin Hood Bay’s walked the tracks carrying baskets of fish, and smuggled silk around their waist or had pig bladders filled with gin under their petticoats. Remote inns on the moors were often used as storage for smuggled goods. Discovery could be lethal.

One murdered Exciseman was buried under the fire pit of the Saltersgate Inn. To prevent his ghost from returning and seeking revenge, the fire was never put out, burning constantly for 200 years. Exploring here it is easy to imagine nocturnal creatures among the drifting, atmospheric mists common on the windswept moors, cliffs, and rugged hills. Whether you prefer city or coast in Yorkshire, there are always ghosts and nocturnal creatures to be found hovering just outside your vision.