How to navigate the world’s best street party.

Trinidad’s yearly festival turns life up to eleven. In a country that is still deeply religious, Carnival is a robust “farewell to flesh.” Trinis have an opportunity to become a less inhibited version of themselves, where they cast aside their shyness and “play ah’ mas.” And there’s a yearly, standing, open invitation to anyone and everyone to join and experience its transformational power. 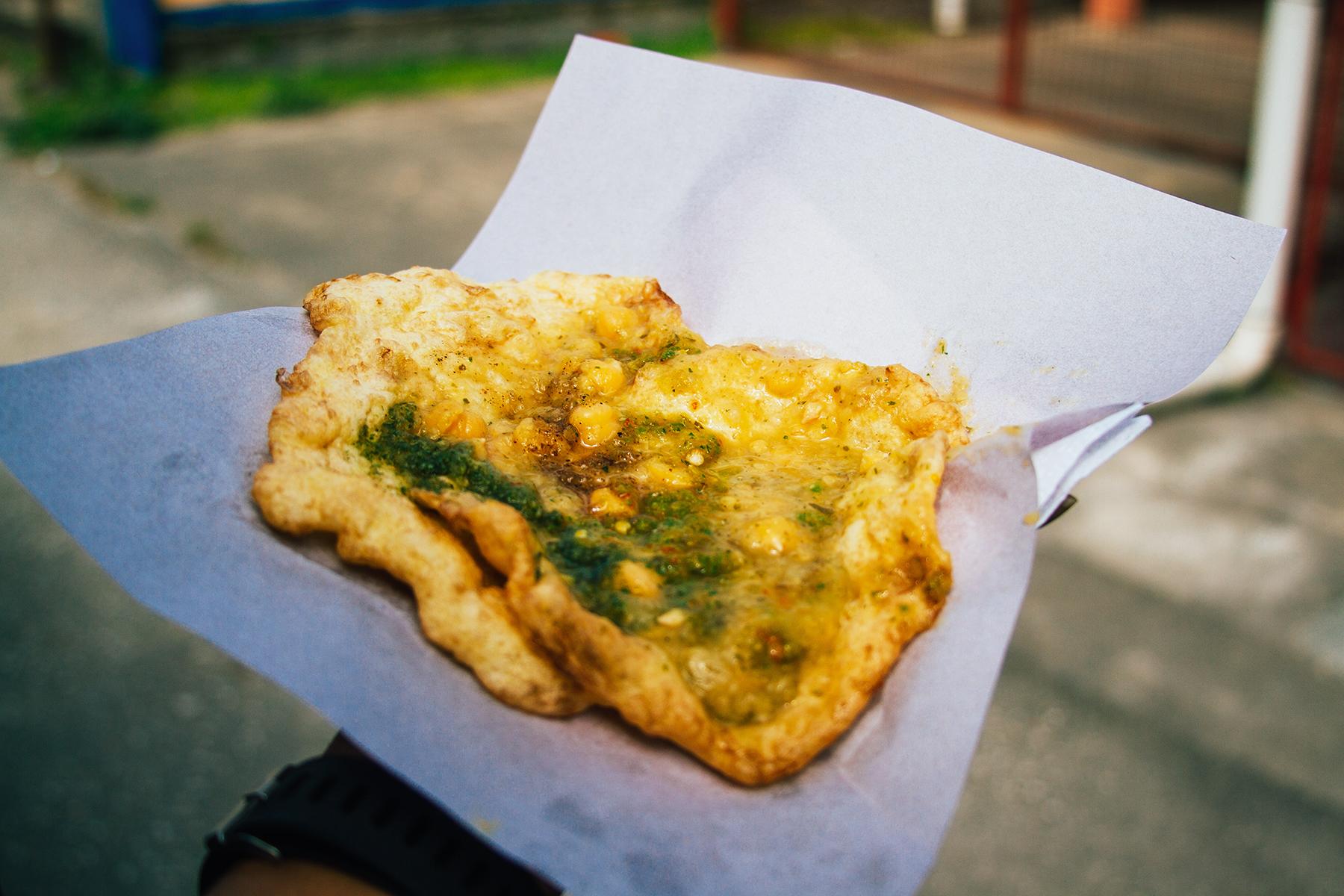 Fuel Up Before You Leave Piarco

Before you leave the airport, head outside to the food stalls and buy Skater’s “doubles.” Chickpea curry on two fluffy barra pancakes topped with chutneys, mango, and tamarind, this Indo-Trinidadian snack will quickly become your favorite food. Take a minute to lick the curry off your fingers. Truly arrive and realize the spicy and delicious carnival experience waiting for you. There will be lots of late nights and you’ll need to eat well to have the energy for all that’s in store—so, fill up.

INSIDER TIPDo you like it hot? Trinidadian peppers are notorious. Ask for yours with “slight pepper.” 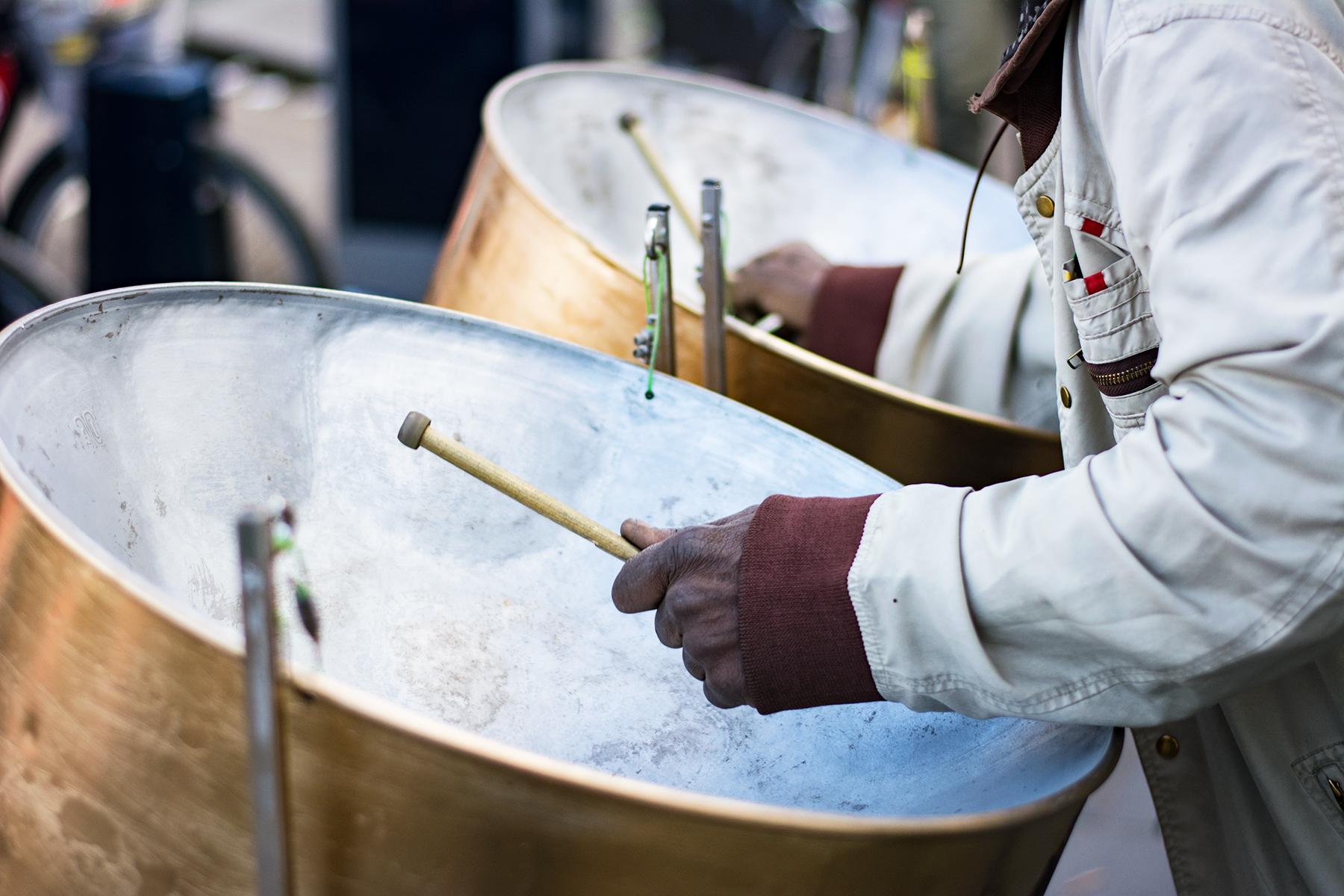 Panorama in the Savannah

The best, or the only, major acoustic instrument invented in the 20th century, pan was created in Trinidad from discarded oil barrels. People argue about the origin story, but no one can disagree that when played, they light up your ears like no orchestra you’ve ever heard before. Don’t imagine a lone player of “Yellow Bird” on a street corner, but rather a 100 musicians on nearly 300 drums, and a wall of sound that vibrates your body.

INSIDER TIPVisit a Pan Yard first to watch them drill as they prep for the big night and then buy your tickets for the Panorama (both the semifinals and finals shows are great) to see the big bands compete for the coveted title of number one. 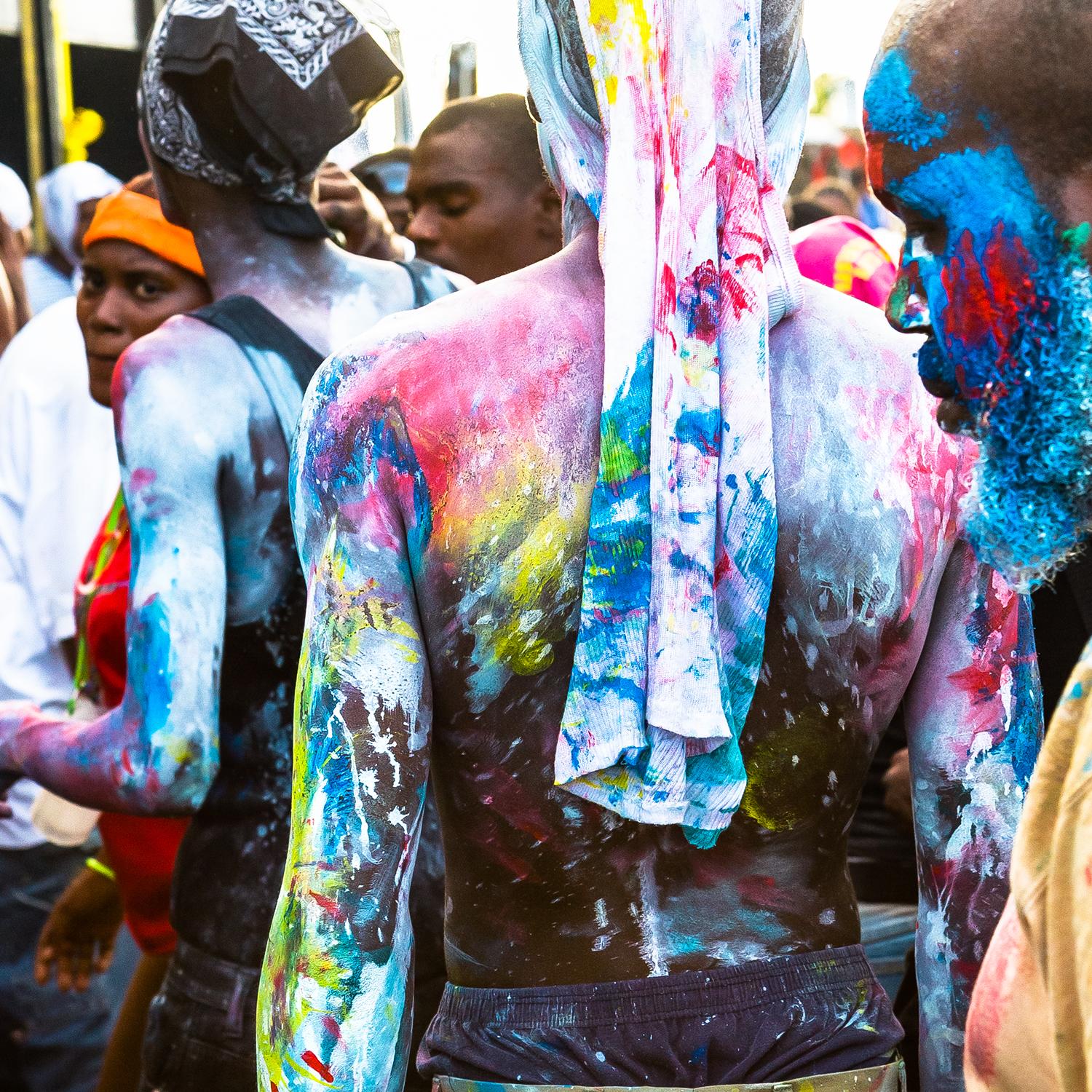 The most liberating part of the best street party in the world, Jouvert is the reason Trinis don’t need therapy. Dance it all out from 4 am until the sun comes up behind a semi truck stacked with speakers blasting soca. Most people play with a group of friends and relatives together in a Jouvert band. “Play ah dutty mas” for the full immersion experience. That means you’ll be covered in mud, oil, or paint. Popular bands include Friends for the Road, 3Canal, Duck Crew, and Dirty Dozen.

INSIDER TIPSign up with a band to get your costumes ahead of time or be left watching on the sidelines. 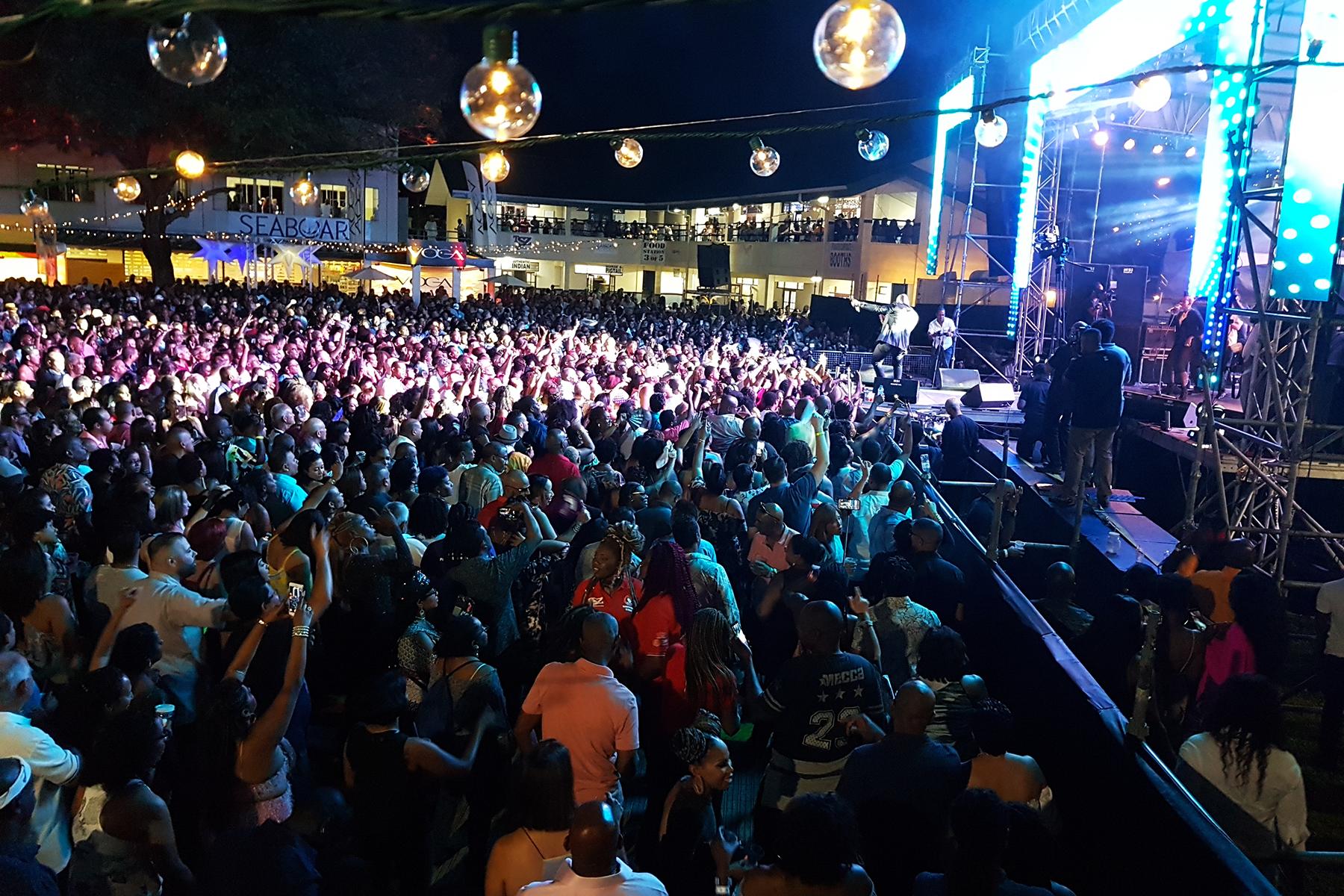 Fete is Trinidad’s middle name and no one can party like Trinis. Ever been to a party that starts in the middle of the night and lasts through breakfast? How about one that sprays everyone with water? Or covers you in colored powder? Or plays soca on a boat? Fetes start at 2 pm, 10 pm, midnight, at 3 am. They are well lubricated by drinking, and everyone gets decked out. Popular soca artistes perform, often at multiple fetes in a night.

INSIDER TIPTickets to some of these can be expensive and hard to come by, but score one and you’ll realize what the hype is all about. And don’t worry, there are at least ten fetes a weekend so you won’t be left out. 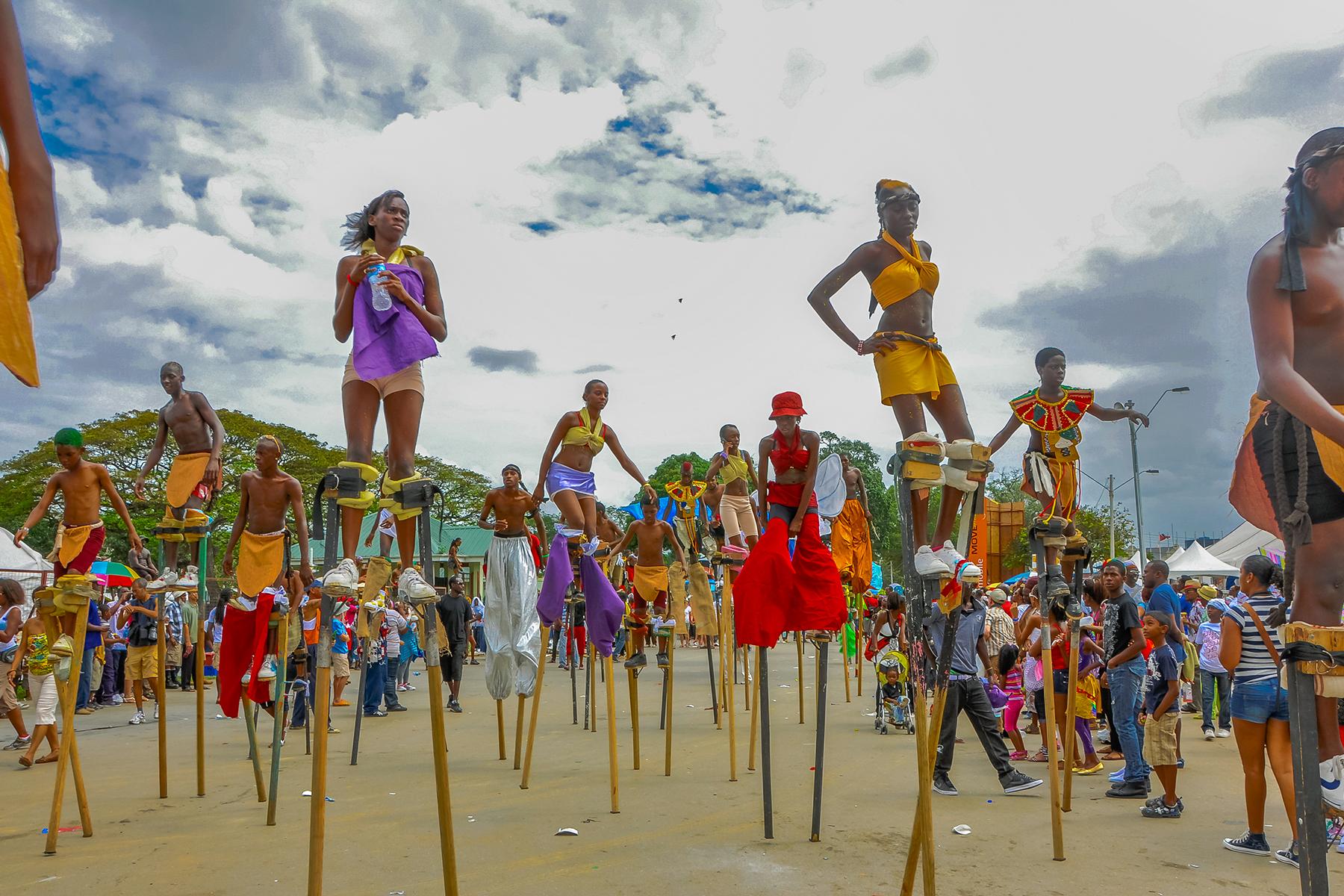 At Victoria Square on Carnival Thursday night or on Frederick Street at noon on Carnival Friday, you’ll see the “ole time mas’.” (Mas’ is how people refer to masquerade and costumes.) Dame Lorraine’s in drag with exaggerated bosoms and bums waiving, Midnight Robbers with huge hats who tell tall tales, and Moko Jumbies on nine-foot stilts who “walked here from Africa” are all symbols of Carnival’s roots. 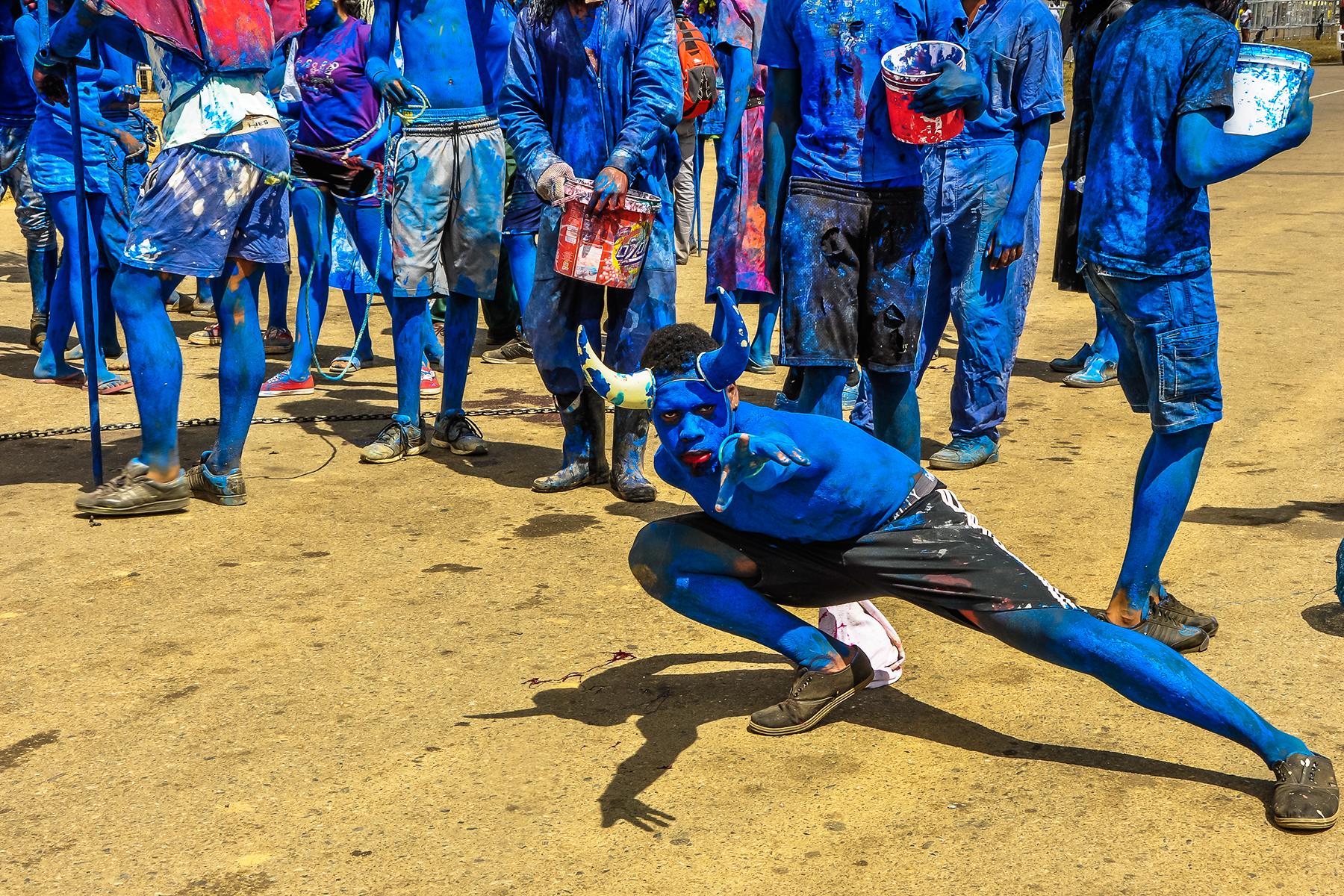 On Carnival Monday evening, trek north of the city and take a land cruiser taxi from Maraval up the steep hills to the tiny village of Paramin where a special tradition lives on in the blue devil. Local people cover themselves in indigo (washing blue) and transform into bands of devils. Screaming winged imps roam the streets accompanied by primal frenzied rhythms beaten on biscuit tins. That terrifying red oozing from their mouths? Don’t be too afraid, it’s dyed fruit.

INSIDER TIPThere’s no entrance fee but be ready to pay to stay clean. As a bystander, be sure to have many small bills on hand (USD is fine) or else they will smear you with their blue.

Lime Under the Trees at Hotel Normandie

The historic hotel hosts one of the best concert series leading up to Carnival weekend featuring old-time Calypsonians and famous musicians. Even the hottest acts show up for cameos. Unlike fetes, the hotel creates a sit-down concert venue outside under the mature Immortelle and Mango trees.

INSIDER TIPThe venue seats 200. Go to the hotel to purchase tickets ahead of time and while you are there, stop at their gift shops, one of the best places to get unique souvenirs like local chocolate and books of Caribbean authors. There’s also a cigar shop just outside. 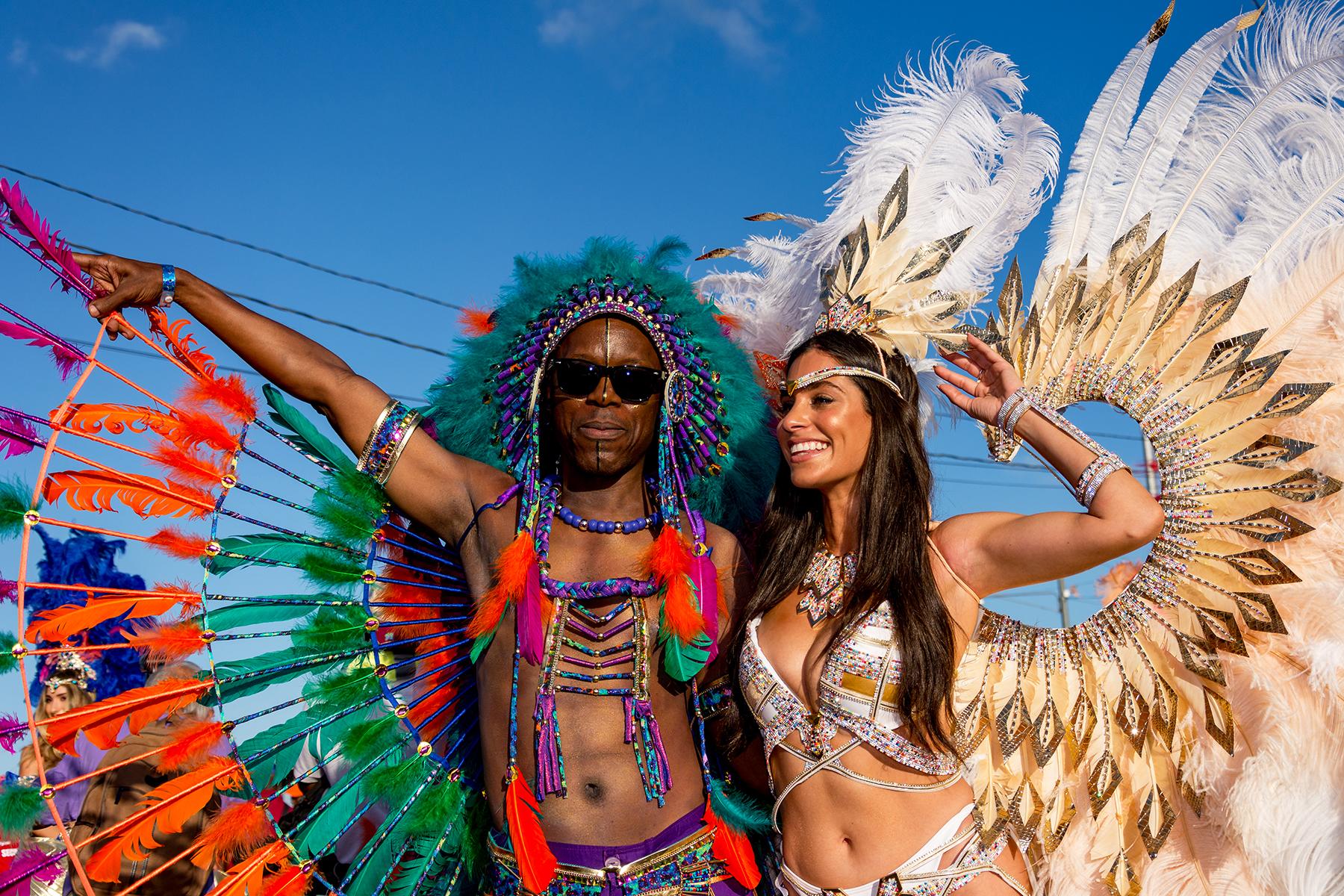 Immerse in Soca and Practice Your “Wine”

Soca music is the “soul of Calypso” and is the faster dance version of the Harry Belafonte your parents listened to. You’ll know all the big tunes after just three days because every car, radio station, shop, and available speaker plays soca. This is what you’ll dance to when you ‘play ah mas’ on the road. Before you go, listen to DJ Private Ryan to hear what’s hot for 2019. Then google “Trinidadian wine” and see if you can teach your hips to do that before you go.

INSIDER TIPChose a favorite song and use this to strike up a conversation about what will win “Road March,” the favorite song of the year. Use this one to perfect your wine.

Need a break from the heat? Want a little good vibes indoor entertainment? Just a stone’s throw from the main Carnival Savannah stage, Rapso group 3Canal creates beautiful theater, taking the carnival spirit and turning it into a choreographed stage show. The message is always uplifting and you’ll dance out with their music stuck in your head. Don’t forget to pick up one of their t-shirts, some of the best Carnival swag you can buy. 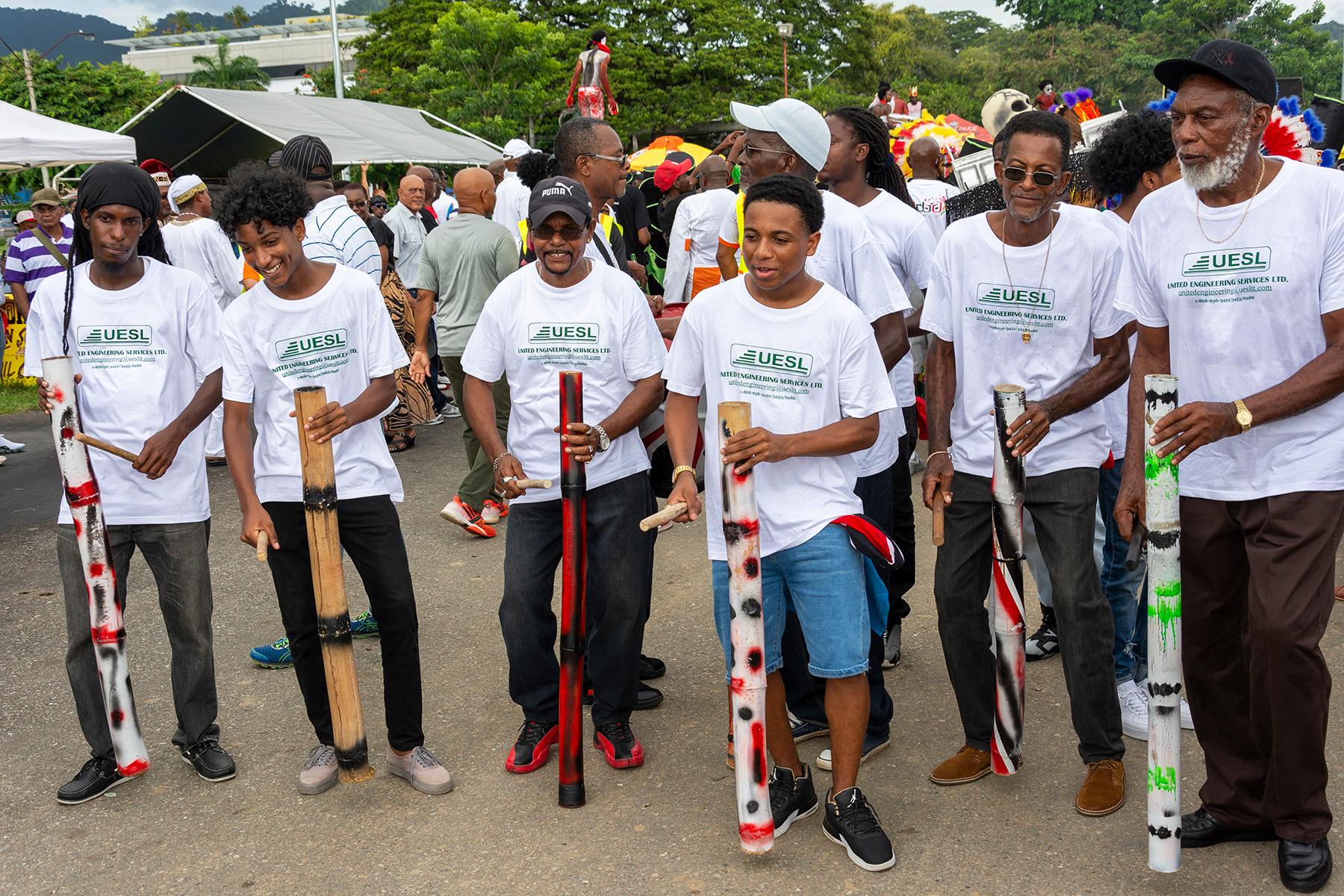 Early on Carnival Friday morning (read: 4 am or so) come out to watch a reenactment of the famous Canboulay riots. “Cannes Brulee” is the lighting on fire of sugar cane to mark freedom from slavery. When, in 1881, the British tried to stop this celebration, people resisted and riots broke out. Now, you can see stick fighting (a martial art), tamboo bamboo drumming, and lit flambeaux as a way to start the Carnival weekend. 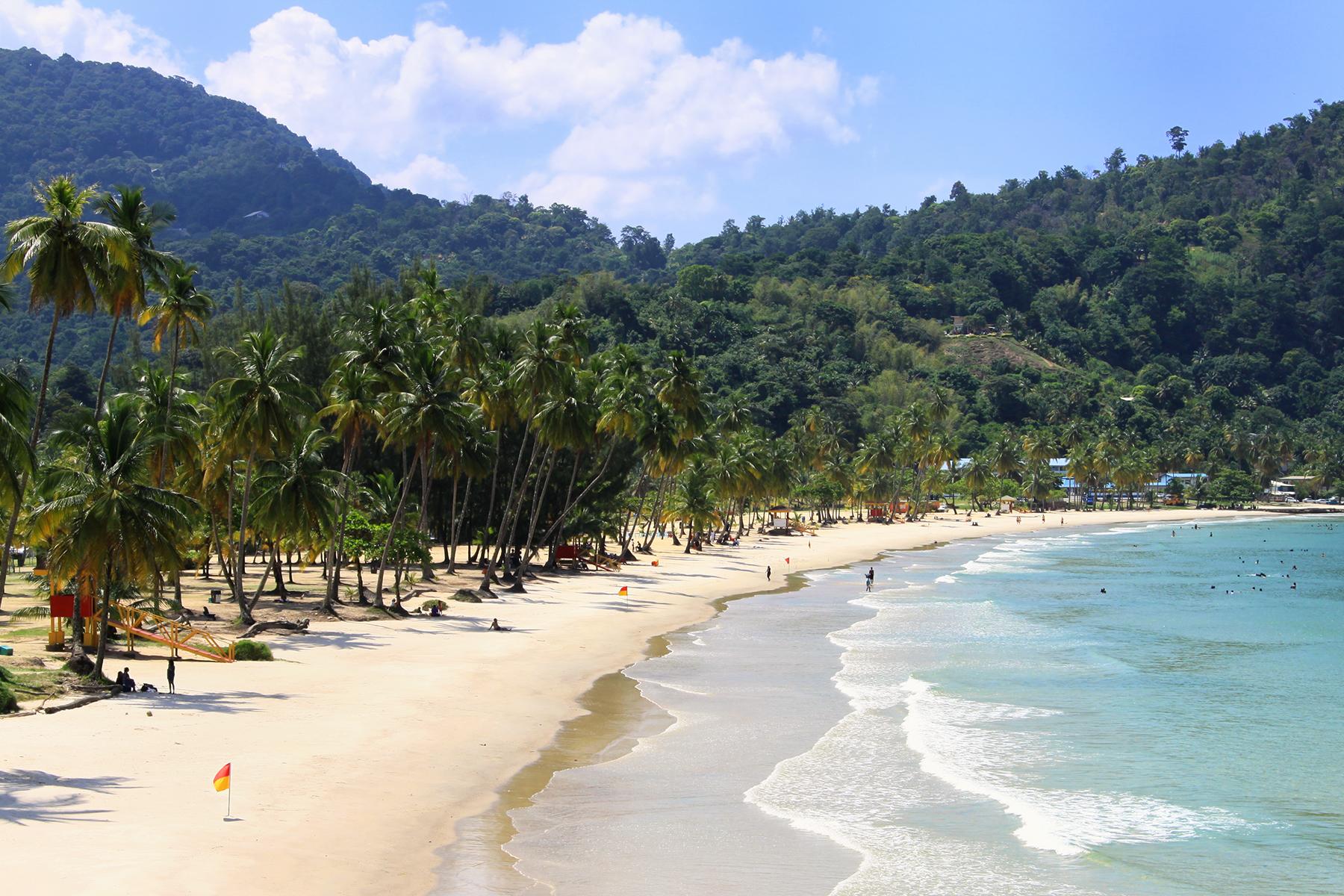 When you’ve had too much heat and too much fetein’, take a break and go to the beach. You are on an island after all. Maracas Bay is not the closest, but it is one of the best beaches. Be sure to stop for snacks like pineapple chow and coconut water at the lookout. And the day after Carnival is the start of lent so much of the country gives up alcohol and turns it down a notch. That’s when many heads to the beach to relax after they’ve danced in the sun. Join them so you don’t go home needing a vacation.

INSIDER TIPThe road is windy so consider hiring a driver who knows the way well. 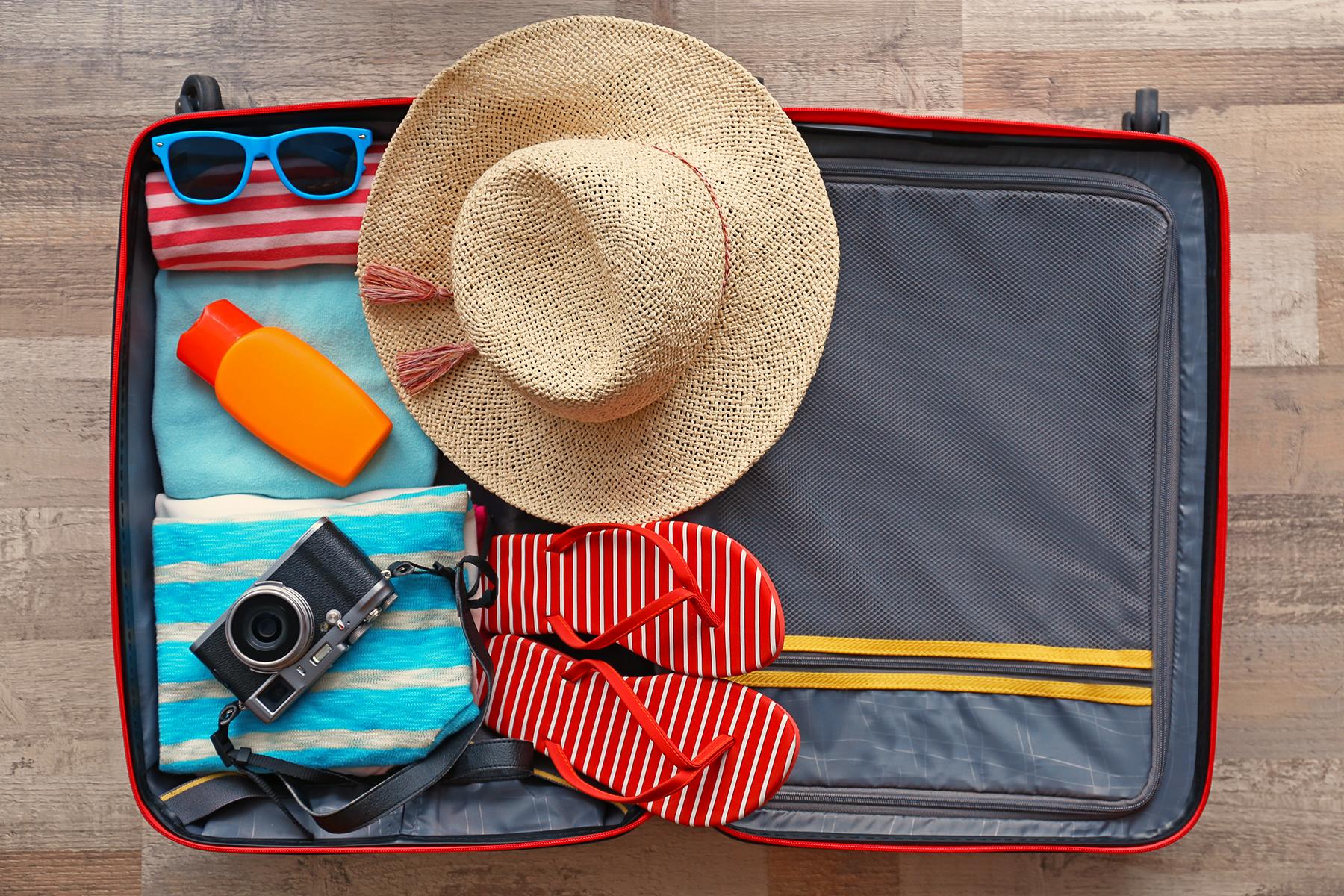 Anything you need, you can buy on the island. But who wants to spend time away from the party? You’ll be walking, dancing, and jumpin’–good cute tennis shoes are essential. Pack loads of sunscreen and some bug spray. Sunglasses and hat are key. The water is safe to drink so bring a bottle to refill. Trinis swear by vitamins to keep their energy up so throw some in. You don’t need much else. And don’t bring any camouflage because it is still illegal for non-military members to wear it.

INSIDER TIPLeave lots of room in your suitcase to bring home aged Trinidadian rum from duty-free when you leave. They’ve got the best prices and selection so no need to lug it around.