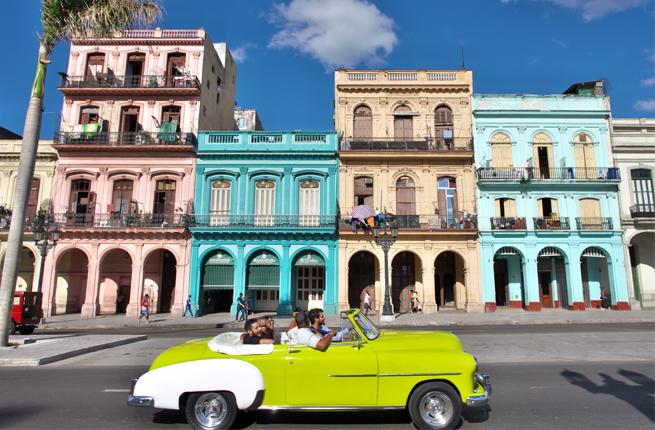 “How would you like to spend the weekend in Havana?” sang Carmen Miranda in the 1941 film Week-end in Havana. In the interim, a 50-year-plus U.S. economic embargo put the island nation off limits for Americans and made Cuba’s sultry capital one of those so-near-and-yet-so-far destinations. The rapprochement that began between our two countries in 2015 now opens up new travel opportunities, and with eight U.S. airlines rolling out scheduled service to Havana, now is a great time to visit this city an hour south of Miami. A few legal restrictions do remain, though, and it’s not quite unfettered access yet. A long weekend in Havana gives you a taste of one of the hemisphere’s great repositories of colonial architecture and a thriving music scene. And few cities manage to pull off both “magnificent” and “crumbling” with such style. 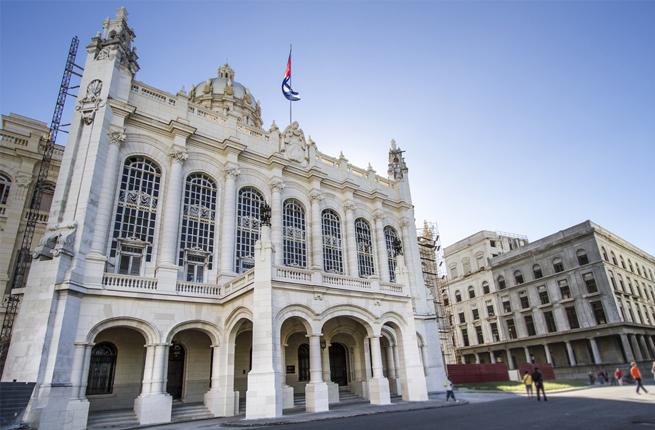 Dive into politics on Friday at the Museo de la Revolución, housed in the one-time presidential palace. We yanquis might bristle at the presentation of events following Castro’s 1959 rise to power, but most Cubans show you no ill will as an individual American. You’ll do a double take when you spot the nearby Capitolio, Cuba’s one-time legislative home, modeled on the U.S. Capitol, but with a taller, slimmer dome. The 1929 site is under perpetual restoration these days, and you may or may not be allowed inside.

Drivers keep Cuba’s famous 1950s cars in tip-top shape, and many congregate near the Capitolio and adjacent Parque Central. You may not use them as point-to-point private taxis—spiffy, comparatively boring Japanese models serve that purpose—but you can hire them for excursions. Talk to a driver about a weekend ride, but remember there will be no air conditioning. 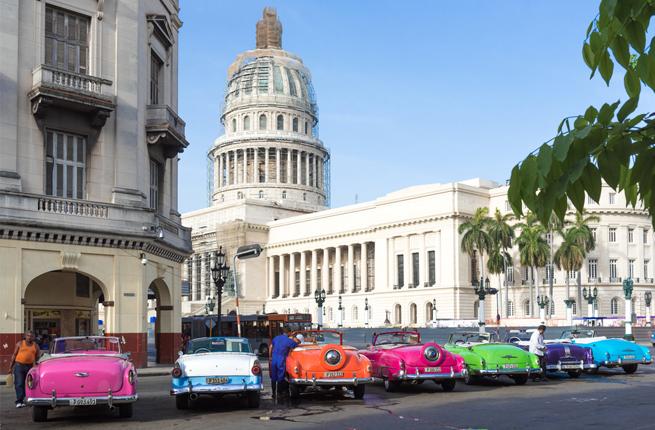 Havana meets Vegas at the Tropicana, one of the world’s most famous cabarets. The feathers and sequins evoke that bygone era when Lucy met Ricky Ricardo. Cheesy? Kind of, but the place packs ’em in every night. Your hotel desk can arrange various packages with drinks, with or without dinner. If the Tropicana registers too high on your kitsch meter, the fabulous, and newly restored and reopened Gran Teatro de la Habana hosts the Ballet Nacional de Cuba and provides a more highbrow alternative with performances most Friday evenings. Even if you don’t attend a show, you can take a guided one-day tour of Havana’s most photogenic structures.

Spend your Saturday wandering the cobblestone streets of La Habana Vieja (“Old Havana”), the city’s colonial quarter. (Don’t forget that the name of this city is spelled with a B, not a V, in Spanish.) Officially atheist Cuba lovingly cares for its principal cathedral, the 1777 Catedral de la Habana, notable for its two massive, asymmetrical bell towers. Midday Saturday opening hours make a visit before or after lunch ideal. Mass is at 3 pm—it’s in Spanish, of course. Assemble a variety of tapas for lunch at O’Reilly 304—the address is the name—and enjoy the inventive cocktails.

Thanks to the embargo, Havana Club rum is little known in American circles, but the company’s Museo del Ron Havana Club documents the history of distillation in the country, with a free sample included at the end of your tour, and an adjoining cash bar for imbibing well into the evening. If you’re on a legal visit to Cuba, you may now bring bottles home. 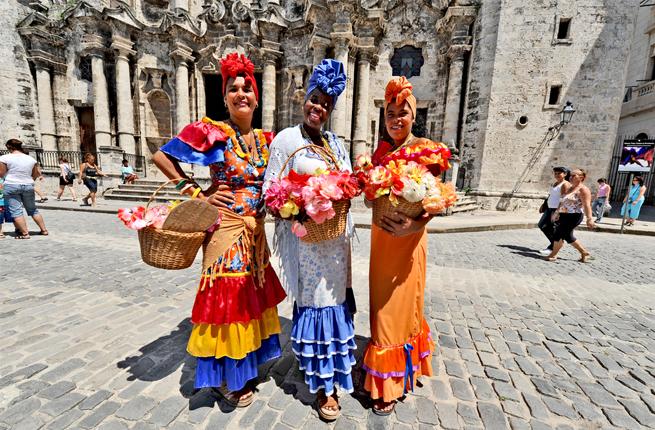 The Museo Nacional de Bellas Artes, Cuba’s premier fine-arts museum, is a twofer and more attuned to the tastes of the bourgeoisie than yesterday’s Revolution Museum was. The original 1928 building exhibits several European masters—Rubens, Breughel, Goya, and Velásquez among them; a starkly modern 1954 structure showcases contemporary Cuban art.

Hop in a regular taxi and head for El Cocinero, which occupies space in an old olive oil factory in the Miramar neighborhood. The rooftop dining area is in demand on warm nights, but you can eat indoors too. Empanadas are the specialty here, a bit pricey but worth it in a city where the dining scene is still hit and miss. A Katy Perry visit cemented the shiny, tropical-chic Sarao as Havana’s hottest new club. Things don’t really get going until 11:30, but it’ll be easier to get in for a nightcap if you arrive earlier.

Did you make a date for a drive with one of the vintage-car owners you met Friday at the Capitolio? A Sunday-morning cruise down the Malecón, Havana’s 7-km/4-mile seaside highway, in a 1957 Buick Riviera is something right out of a film. 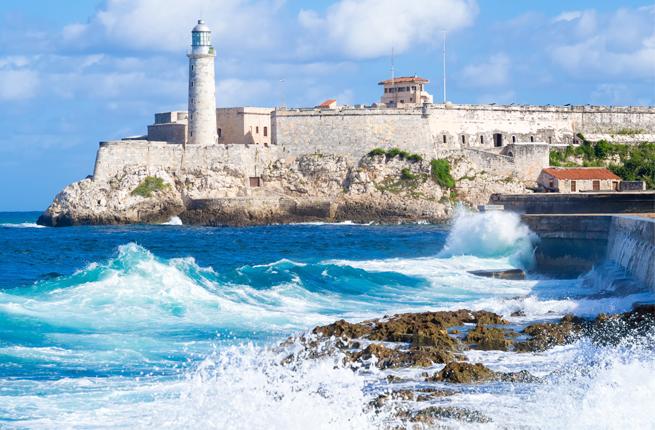 Sunday is a great day to get out of town; a standard taxi works better for a longer excursion. Head southeast from Havana and pay homage to Ernest Hemingway at Finca Vigía, the author’s off-and-on home for 20 years. The site was once a farm, but Havana’s suburbs have now engulfed the place. You’ll see his boat, El Pilar, displayed here as well as all his effects. Veer north to the seaside village of Cojímar, Hemingway’s inspiration for The Old Man and the Sea. Lunch at La Terraza is a standard stop on the Hemingway trail, but the family-run Ajiaco Café gets a wink and a nod from those in the know for better seafood with fewer tourists. Make it a late lunch or early dinner here before heading back to Havana.

Wind up your weekend with a bang, literally, at the Castillo de San Carlos de la Cabaña. Take in the pomp and circumstance of a 9 pm cannon-firing ceremony. (Cover your ears.) The fortress also contains a military museum and a museum dedicated to the life of iconic Cuban revolutionary Che Guevara.

Despite many promises, U.S.-issued credit, debit, and ATM cards still do not work in Cuba. If you can pay for anything in advance online, do so to lessen the cash you need to carry. You may not spend cash U.S. dollars; you must change them into so-called convertible pesos (CUC), an artificial, secondary currency the country uses for premium goods and services, including tourism transactions. At this writing, 1 CUC = U.S. $1, but you will pay a 13 percent surcharge to make the exchange. 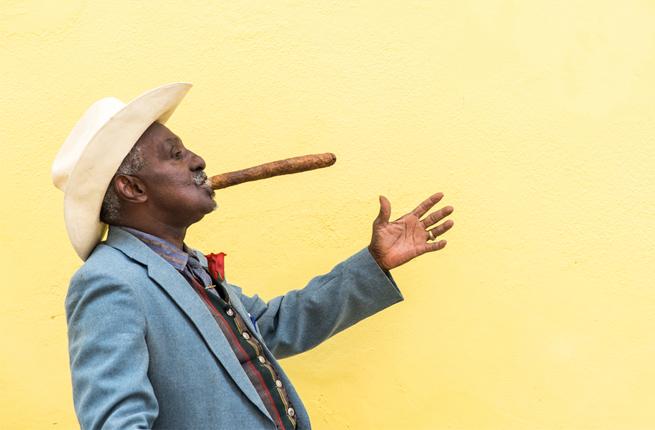 The U.S. government approves of 12 categories of travel for its citizens to visit Cuba, among them family visits, journalism, and cultural and educational travel. Glaringly absent from the list is leisure tourism. Under the “educational” heading fall the long-established people-to-people tours with their highly structured itineraries of cultural activities. (Indeed, a few such tour operators offer escorted long weekends in Havana.) As of 2016, you are permitted to put together your own culturally themed visit to Cuba outside the bounds of a tour group, as long as that is the sole purpose of your trip. (Hanging out at Playas del Este, the beaches east of the city, would not conform to U.S. law.) You must keep a log of your activities and have it available for possible inspection by U.S. authorities for 5 years. Whether or not anyone official will ever ask to see your journal is a different matter entirely.

Alaska, American, Delta, Frontier, JetBlue, Southwest, Spirit, and United airlines are rolling out service from various hubs to Cuba’s capital. Of the 20 daily USA–Havana flights, 14 depart from Florida. In keeping with the requirement that you fit into one of the 12 categories of permitted travel, airline websites oblige you to state the purpose of your travel to Cuba when you book your tickets. 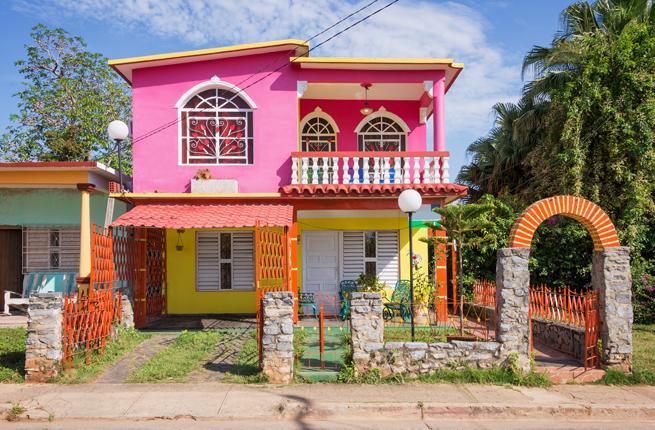 The state owns all hotels in Cuba, but it has turned over management of several to foreign firms—so far, mostly Spanish and Canadian chains—which are permitted to brand the properties with their names. In a spark of government-sanctioned private enterprise, Cubans may rent rooms (a maximum of five) in their homes to tourists. The quality of these casa particulares varies widely. No centralized listing exists, but Airbnb serves as a reservations agent for many of them.

Everyone from Hollywood, politics, and organized crime stayed at the salmon-colored Hotel Nacional de Cuba during its 1950s heyday. To be frank, you can do better, but history draws guests here. The Spanish chain Iberostar puts you right on the central park at its spiffy Iberostar Parque Central hotel. The U.S. brand Starwood is getting into the lodging game here in early 2017 and will manage the iconic Hotel Inglaterra, Havana’s oldest lodging.

Expect high temperatures in the 70s with mostly dry days and cool nights during the North American winter. The thermometer climbs into the 80s by our spring, and many regard this as the best time of year to visit Havana. Heat, humidity, and rain increase markedly in summer, and the Atlantic hurricane season always poses a risk to Cuba in summer and fall.