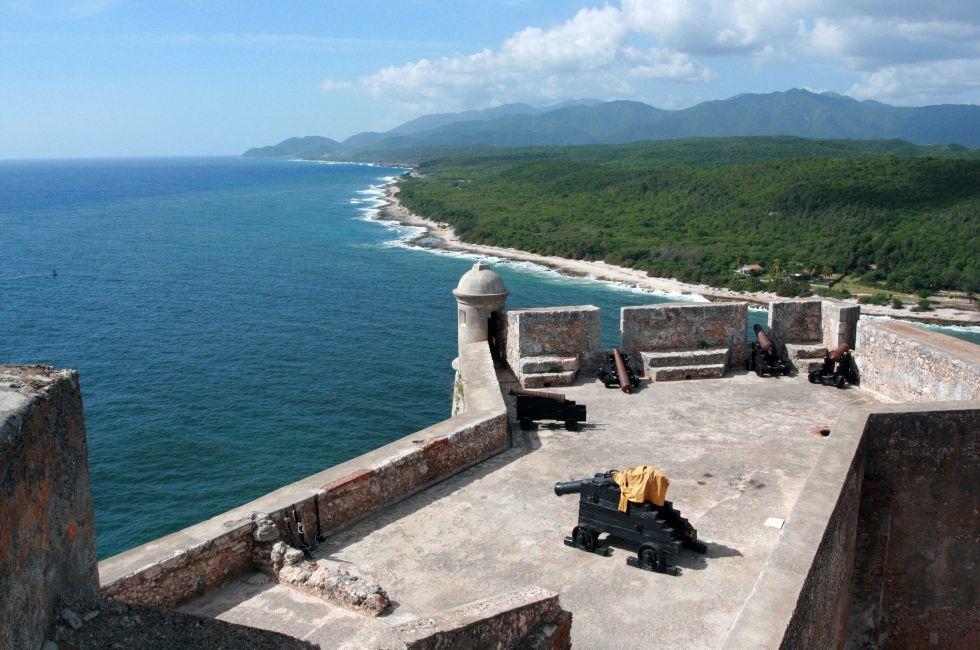 The region known as El Oriente has a variety of sublimely beautiful settings—from palm-lined beaches to the city of Santiago—the metaphorical seat of the Cuban soul—to the majestic Sierra Maestra. The sagas that unfolded here lent great drama to the island's history, and Cubans speak of the area with awe.

Eastern Cuba brims with tales of rebellion and revolution. The stories go back all the way to the 16th century, when Hatuey, a Taíno leader, rose up against the Spaniards and was captured and burned at the stake near Baracoa in 1523. On October 10, 1868, Carlos Manuel de Céspedes freed the slaves on his plantation near Bayamo and proclaimed Cuba's independence from Spain, launching the Ten Years' War. And what can you say about the resolve of citizens of Bayamo, who, a year later, burned their lovely city to the ground rather than let it fall into Spanish hands? In 1895, patriot and poet José Martí landed on the south coast of the Bahía de Guantánamo; he was killed shortly thereafter in a battle against the Spanish at Dos Ríos in Granma Province. The region is the birthplace of Fidel Castro (who was born in Holguín Province) and his Revolution. (Castro's arch-nemesis, Fulgencio Batista, was born nearby, so the pendulum has swung both ways in this region.) Granma Province itself takes its name from the boat that carried Castro and 81 revolutionaries back to Cuba from exile in Mexico in 1956. Although their landing—at Playa las Coloradas in the province's southwestern corner—was disastrous, the survivors fled to the Sierra Maestra, the eastern mountain range, and continued their fight.

In this region you'll find Cuba's second largest city, Santiago de Cuba, whose proud citizens are second to none and which has always been as open to French, African, and Caribbean Creole influences as it has to those of far-off Havana. It explodes during the July carnival, a week-long festival of music, dancing, and merrymaking. One of the country's great pleasures may be enjoying a mojito (light rum, sugar, mint, and soda) on the balcony of Santiago's Hotel Casa Granda. From here, you can watch the goings-on in the Parque Céspedes, the city's historic heart and the hub for Santiagueros (as locals are called). The city also sizzles at night, when musicians share a microphone at the Casa de la Trova.

From the Caribbean Sea 32 km (20 miles) north to the Atlantic, a legendary highway known as La Farola cuts a sinuous path through jungle. At its northern end, El Yunque, an anvil-shape mountain, rises into the clouds. Beyond, in the far reaches of Guantánamo Province, are more coastal enclaves, including quirky Baracoa, site of the first Spanish settlement. Throughout the region, hiking trails lead through history to colorful hamlets and old rebel outposts that appear lost in verdant jungle or rugged mountains.

El Oriente remains Cuba's least-visited, least-known, least-developed region. You're a long way from Havana, and traveling here requires a bit more planning than it does elsewhere in the country. Take a hint from Christopher Columbus, who became Cuba's first tourist when he landed near Baracoa in 1492 during his first visit to the New World. He wrote of the southeast coast: it is “the most beautiful land human eyes have ever seen.” Make the effort to get here, and you just might agree.

Casas Particulares Are an Authentic Alternative to Hotel Stays in Cuba
Travelers interested in seeing a more intimate side of Cuba should consider booking a unique homestay experience.