The bizarre legend behind a most peculiar sight.

Think of Myanmar and one conjures images of floating in a hot air balloon above the temples of Bagan or drifting by villages on the Irrawaddy River. Perhaps gold comes to mind? The winking wonders of Shwedagon Pagoda or the Golden Rock at Mt. Kyaiktiyo are among Myanmar’s most dazzling sights, but neither is the country’s most peculiar. That honor goes to the Pindaya Caves, or the “Shwe U Min Natural Cave Pagoda of Pindaya” as it’s officially known.

A Path to Nirvana

Pindaya, in Myanmar’s Shan State, is not on every Burmese itinerary. Some travelers may overnight at the sleepy town solely to break up their cross-country journey from Inle Lake to Bagan. They will most likely take an afternoon stroll along the shores of the calm Pone Taloke Lake and dine at one of the tranquil lakeside restaurants before climbing back aboard a bus the following morning. Others may visit Pindaya to trek in the remote hills above the town. The secluded six-mile hike to the traditional Yazakyi Monastery is a popular option. 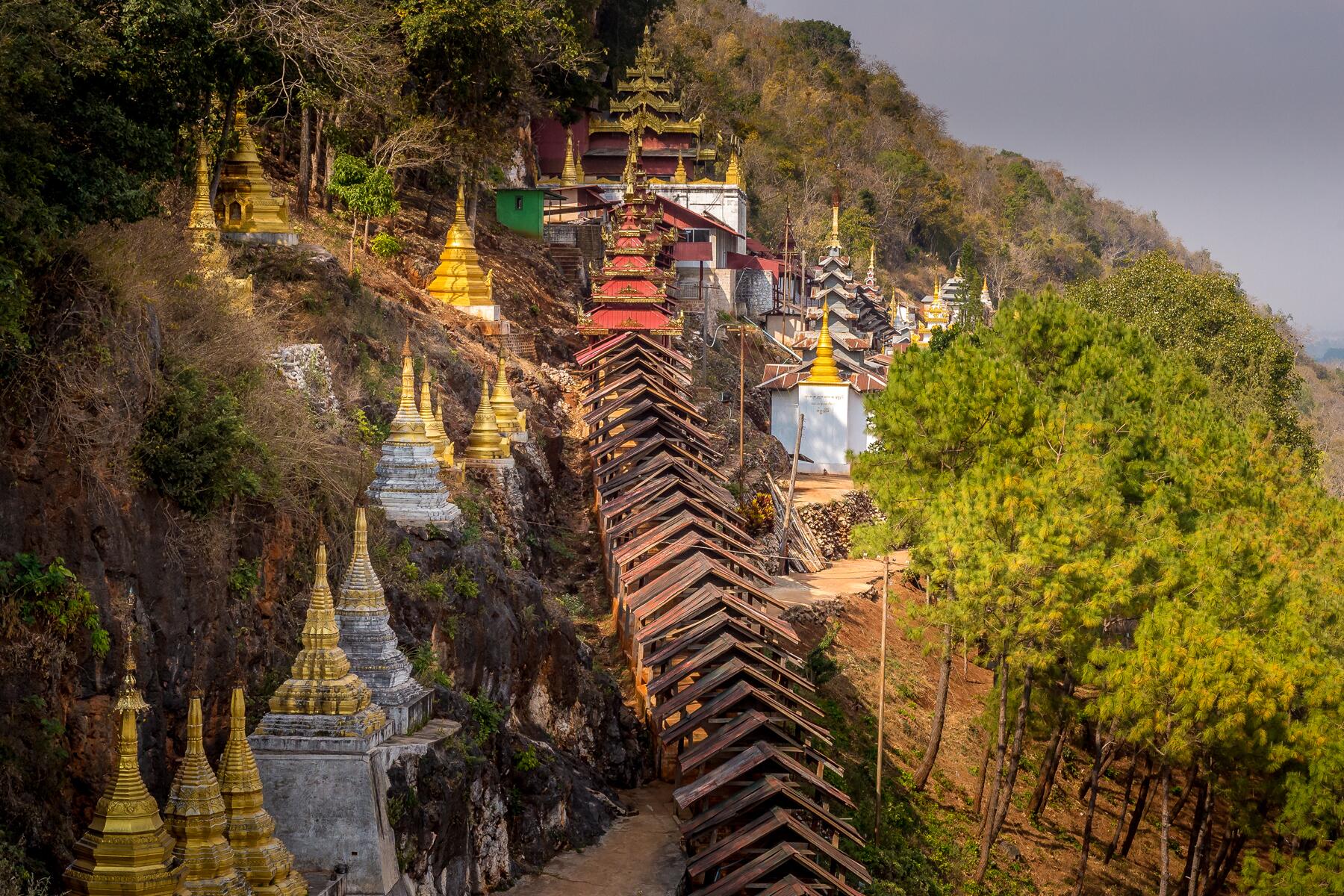 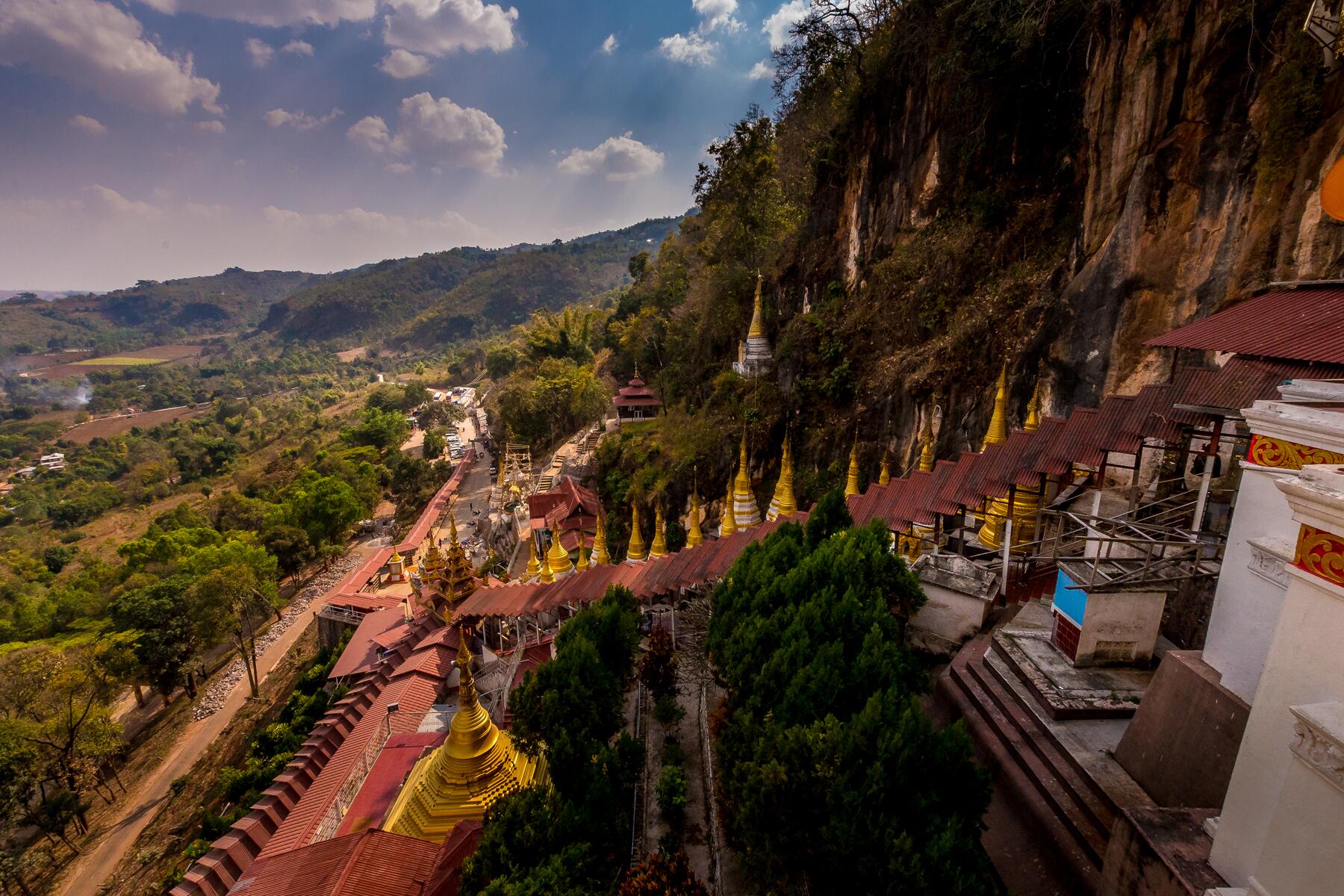 However, the best reason to stop at Pindaya is to see the town’s “world famous” Shwe U Min Natural Cave Pagoda—one of the most revered Buddhist pilgrimage sites in the country and certainly its most unusual.

Positioned high on a limestone ridge above the town lies a labyrinth of twisting natural caves and tunnels bursting with over 9,000 Buddha statues—often referred to as “images.” Large numbers of figurines continue to arrive year after year, installed by devotees hoping to receive favor in return for their endeavor. For believers, the ultimate aim is to escape the cycle of samsara—Buddhism’s series of death and rebirth—and finally achieve Nirvana, or enlightenment.

INSIDER TIPThe Shwe U Min Pagoda is located around two miles or a 20-minute walk from town. Taxis cost approximately $5. The final 130 stairs to the cave entrance can be avoided by taking an elevator.

The winding complex of caverns, stuffed from floor to ceiling with gilt images of Buddha in an extraordinary array of shapes, sizes, and styles, is a sight to behold. Every available inch of floor space along with every nook, cranny, and cavity features an image of the holy figure. The rows of statues fight for space amid slimy limestone stalactites and stalagmites formed from centuries of mineral-laden drops of water.

The Enlightened One can be seen in his full spectrum of traditional poses and hand gestures along with a unique representation of the Buddha holding a single seed in his upturned palm. These caves are believed to be the only place in Myanmar where such a depiction can be found. 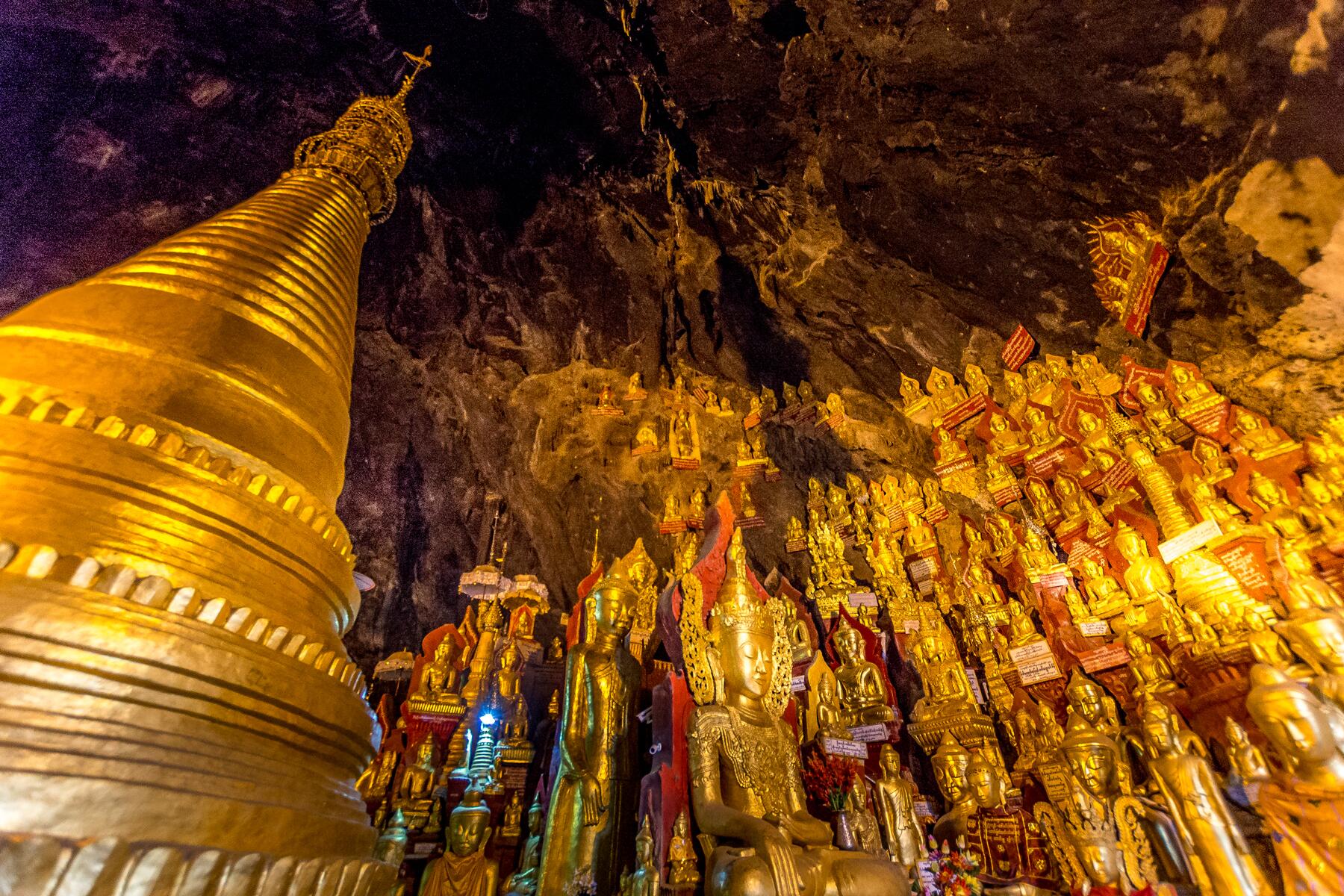 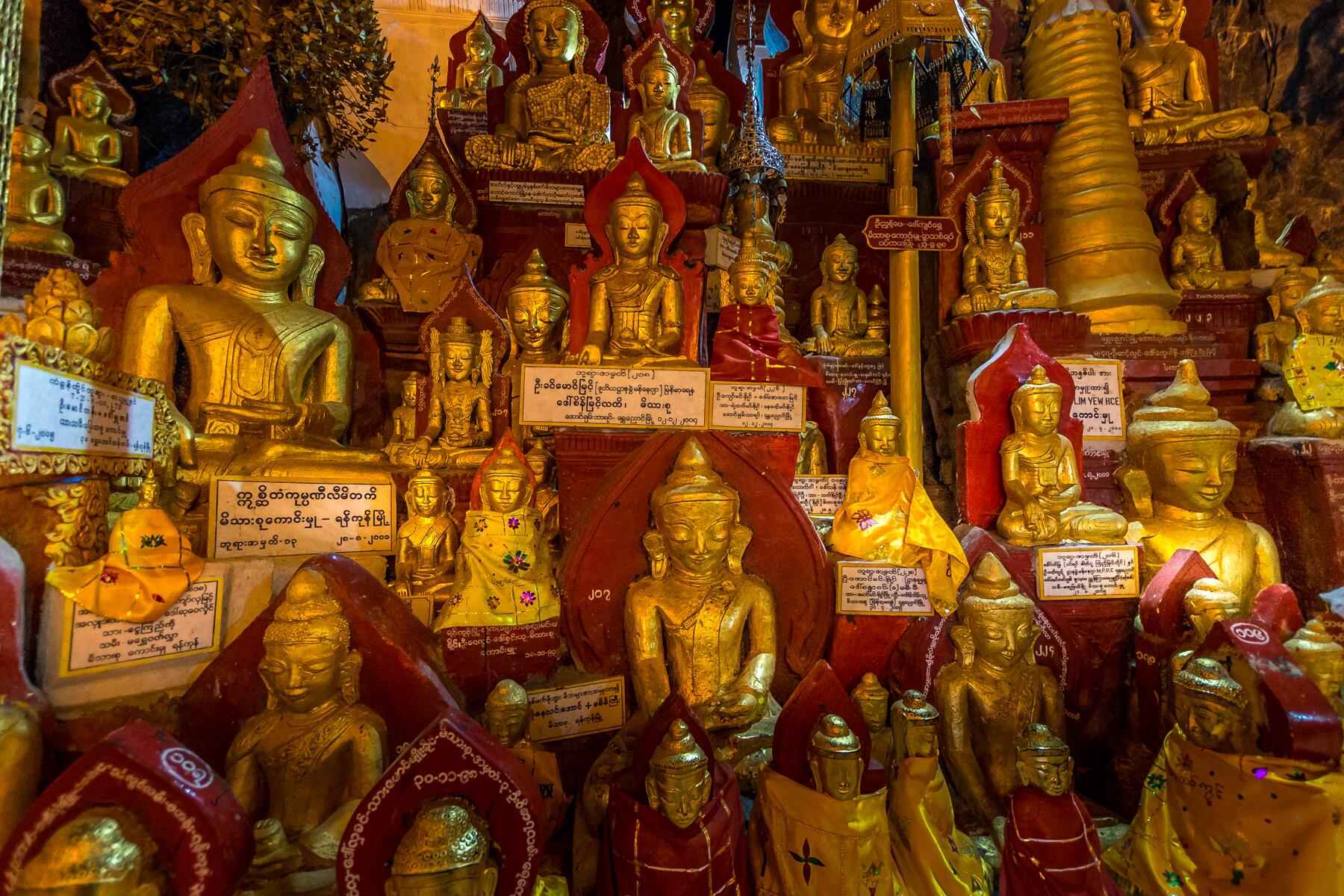 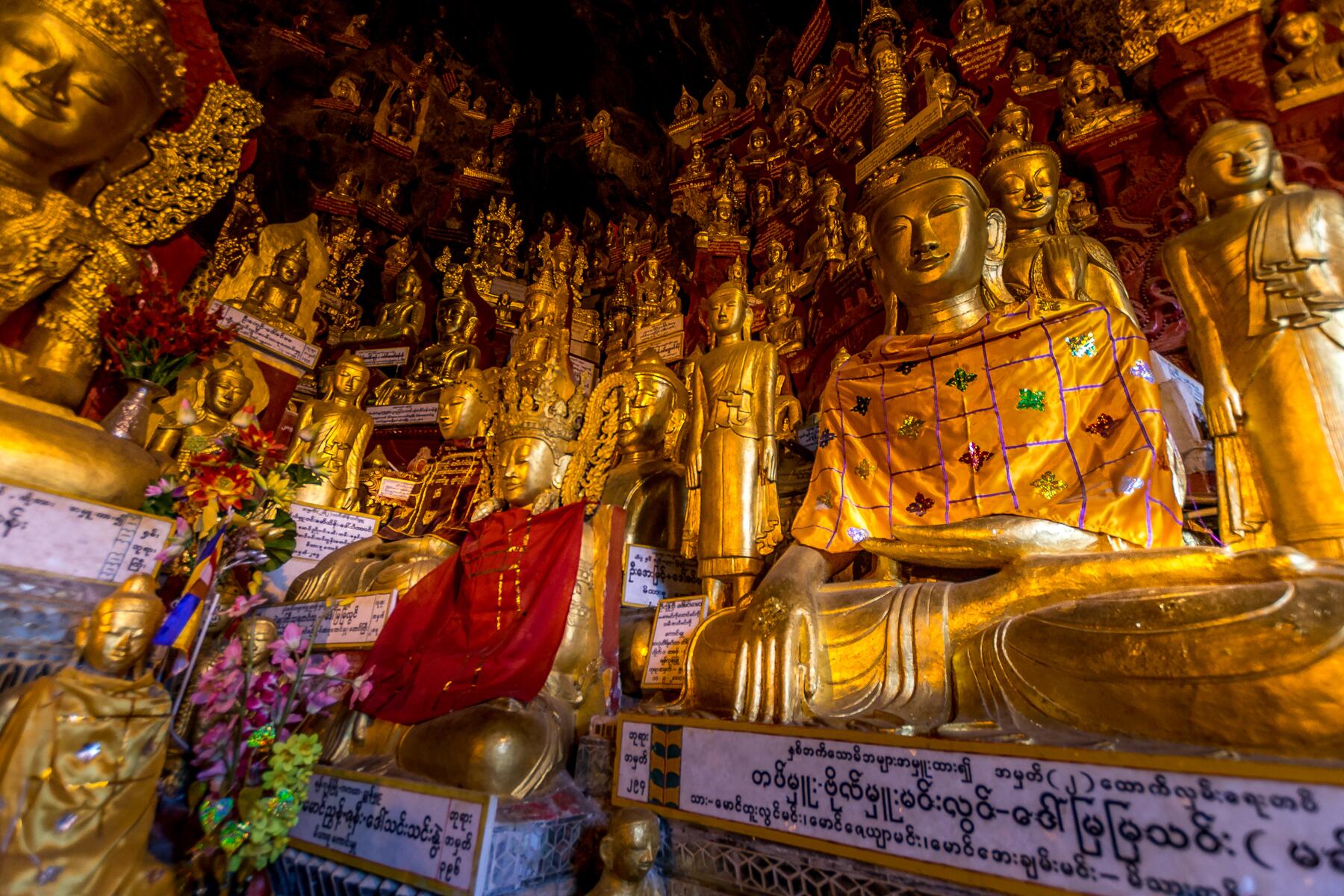 It is uncertain when or why the astonishing accumulation of Buddhist iconography began. There are many statues without engravings, but the earliest inscription dates from 1773. The statues are constructed from a range of materials including alabaster, brick, marble, lacquer, teak, and even cement. However, regardless of what is on the inside, all the statues share the same exterior: gold. Wherever you go in Myanmar, devotees enthusiastically apply gilded leaf to their Buddha images and the caves of Pindaya are an exuberant example of the practice.

Many pilgrims make the journey as representatives of a Buddhist organization in their home country while for others it is a personal journey connecting them and their faith. Throughout the complex, devotees can be found prostrate on the stone floor before the sacred statues. Other enthusiasts squeeze themselves into the cramped meditation chambers that have naturally formed in the cave walls.

There are no signs demanding silence or advocating modesty, but an eerie library-like calm permeates the hollows, encouraging visitors to communicate in whispers and gestures. The caves have the air of a cathedral. Only the cathedral is underground, hollowed out of limestone, humid, devoid of natural light, and deeply claustrophobic. So not really like a cathedral, but extraordinary all the same.

To enter the complex, visitors must make their way through the Shwe U Min Pagoda, climb a long stairway and pass a 40-foot-high gilded Shan-style sitting Buddha. At the pagoda’s entrance, sits Pindaya’s most incongruous exhibit.

If the sight of thousands of golden Buddhas staring out from the depths of an eerie cave wasn’t unique enough, then perhaps a surreal sculpture of a giant spider with razor-sharp teeth bearing down upon its guests is required. 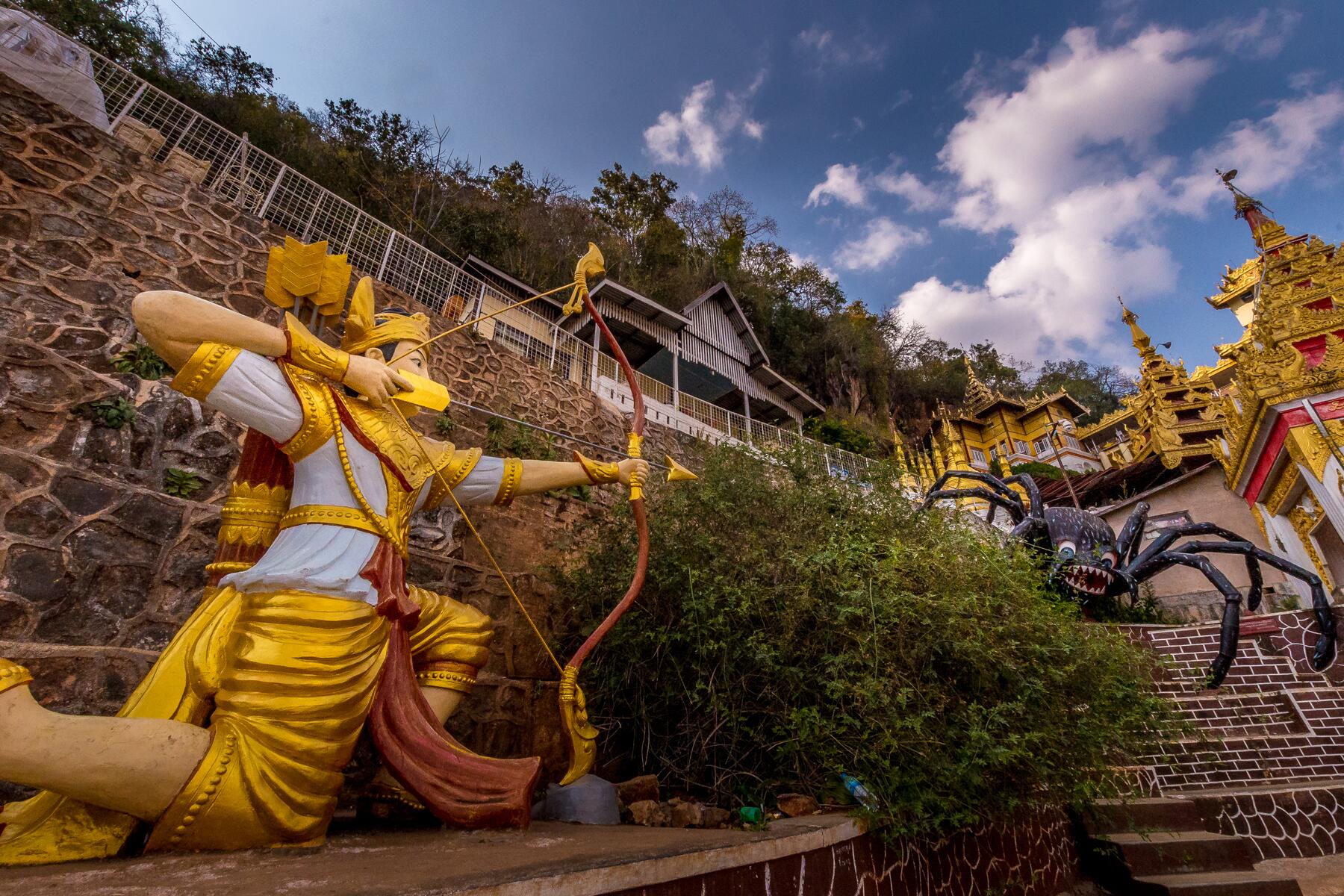 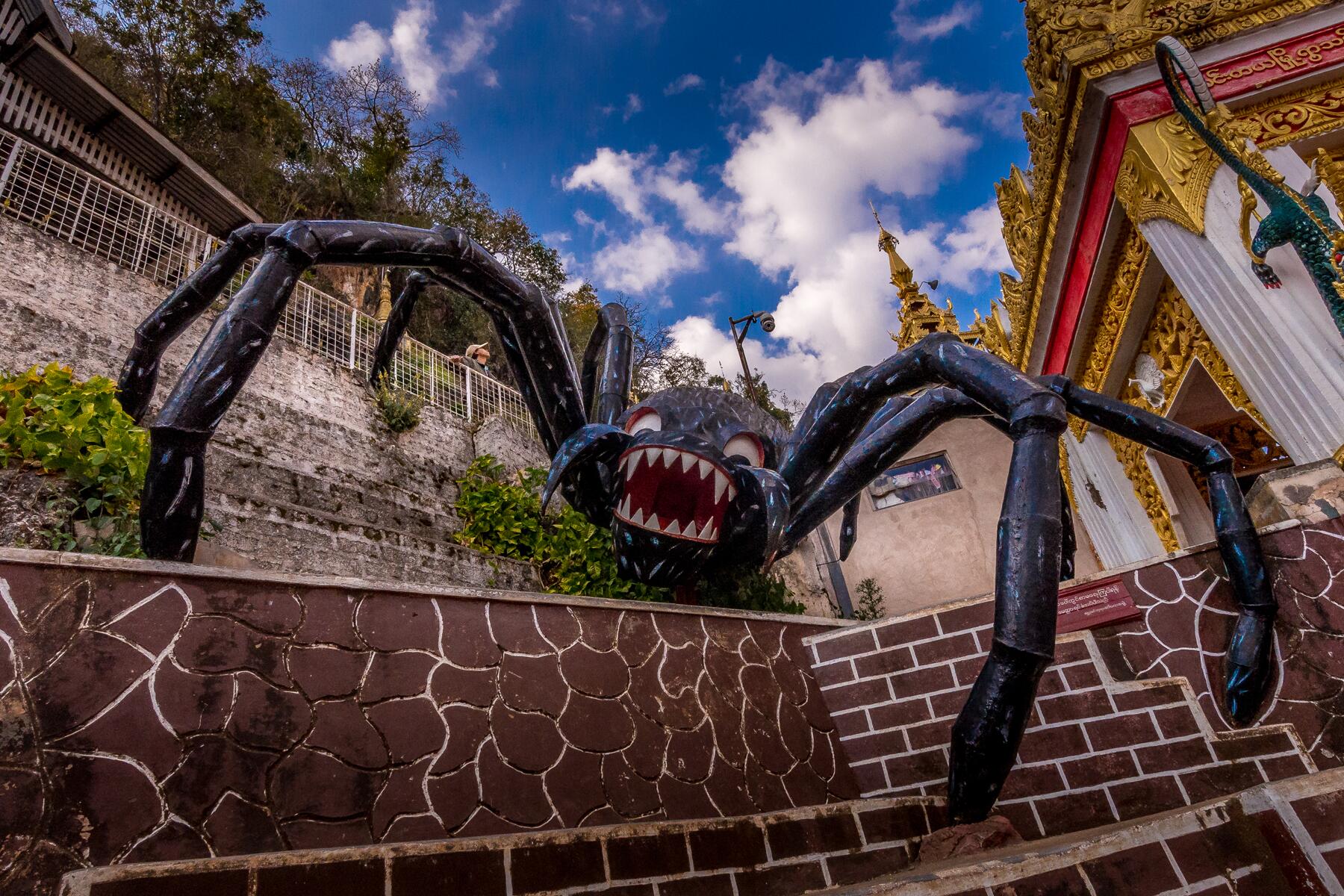 There is a valid reason for the appearance of such an oddity at the entrance to a holy site. Nearby is a slightly less incongruous sculpture of a bow and arrow-clad prince which goes some way to explaining the giant monster spider.

Pindaya takes its name from a local legend. The story goes that seven princesses bathing in the lake below were captured by a giant spider living in the caves. It was down to brave Prince Kummabhaya and his trusty longbow to rescue the fair maidens who were trapped in an enormous spider’s web within the cave.

As the prince slew the spider he yelled “Pinku Ya-Pyi!” meaning “I’ve got the spider!” Over the centuries this would eventually evolve to become Pindaya and explain why one of Myanmar’s most revered pilgrimage sites is guarded by something that would arguably look more at home in a theme park.

Where else, but in this country unlike any other, can you see a gleaming Buddha-filled cave guarded by a giant spider? Of all Myanmar’s pagodas—and there are thousands—Pindaya’s Shwe U Min Natural Cave Pagoda is surely its most arresting.