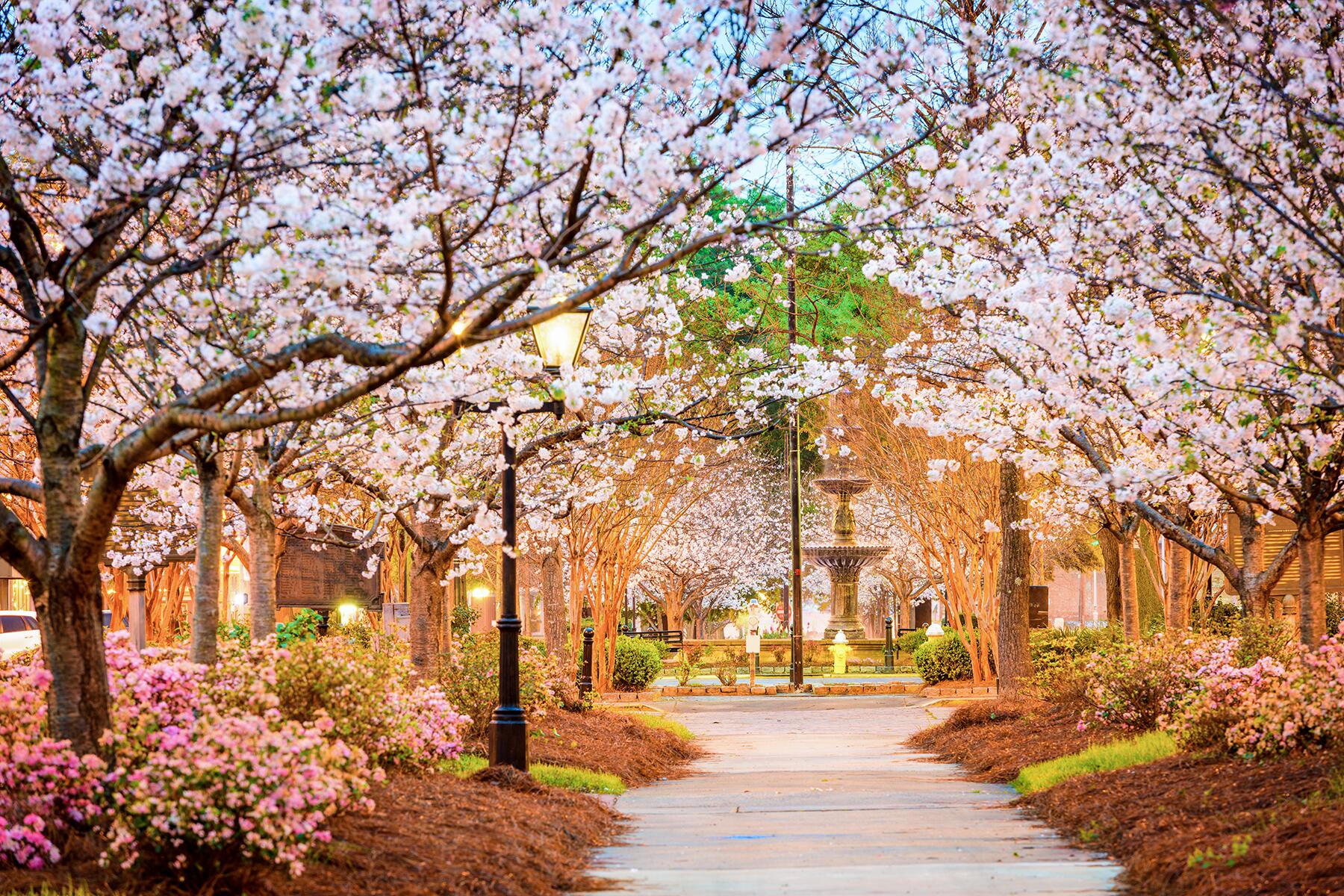 Events Malika Bowling One of the World's Best Cherry Blossom Festivals Is in This Small U.S. Town

How to navigate the city in this time of unrest.

It’s Tuesday afternoon in the arrival hall of Hong Kong International Airport. The massive room is packed with protesters sporting their signature black T-shirts—all holding flyers, satirical postcards, and educational pamphlets which have been translated into several languages.

Every few minutes, they chant in unison: “Free Hong Kong” or break out into their adopted anthem, “Can you hear the people sing?” from Les Miserables. I stop to talk with a young woman who appears to be in her late teens. She calmly explains that the protesters are here to condemn police brutality, then ushers me over to an iPad where she has prepared a compilation of video footage to explain her position. She warns me that it will be violent.

When she presses play, the screen fills with clouds of tear gas in the Kwai Fong MTR (Mass Transit Railway) station, then skips to another scene depicting a police officer tackling a protester and then pushing his bloodied face into the ground. Another clip shows protesters tumbling down an escalator while police shoot them in the back with what appears to be rubber bullets at close range. It’s painful to watch but important.

Events Malika Bowling One of the World's Best Cherry Blossom Festivals Is in This Small U.S. Town
Continue Reading Article After Our Video

Everyone who loves Hong Kong, including myself—a permanent resident, having lived in the city for seven years—is asking the same question: How has it come to this?

What’s Being Protested and Why?

Now in their tenth straight week, these protests started with the extradition bill. The bill, which would have allowed Hong Kong residents and foreigners to be sent to mainland China to face trials in the notoriously opaque Communist Party courts, drew widespread public condemnation due to fears that China would abuse its scope.

On Sunday, June 9, an estimated 1 million people marched across Hong Kong Island demanding the government’s withdrawal of the bill. It was a remarkably peaceful demonstration, comprising people across all ages and sectors of society. However, Carrie Lam, Hong Kong’s Chief Executive, was not swayed by the protest and continued to push the bill through.

A few days later, on June 12, more protesters took to the streets and were met with rubber bullets and at least 150 canisters of tear gas in what human rights groups have condemned as overly forceful tactics by police. The next day, Lam “suspended” the controversial bill, but it was not enough to quell unrest. If anything, it added fuel to the fire. 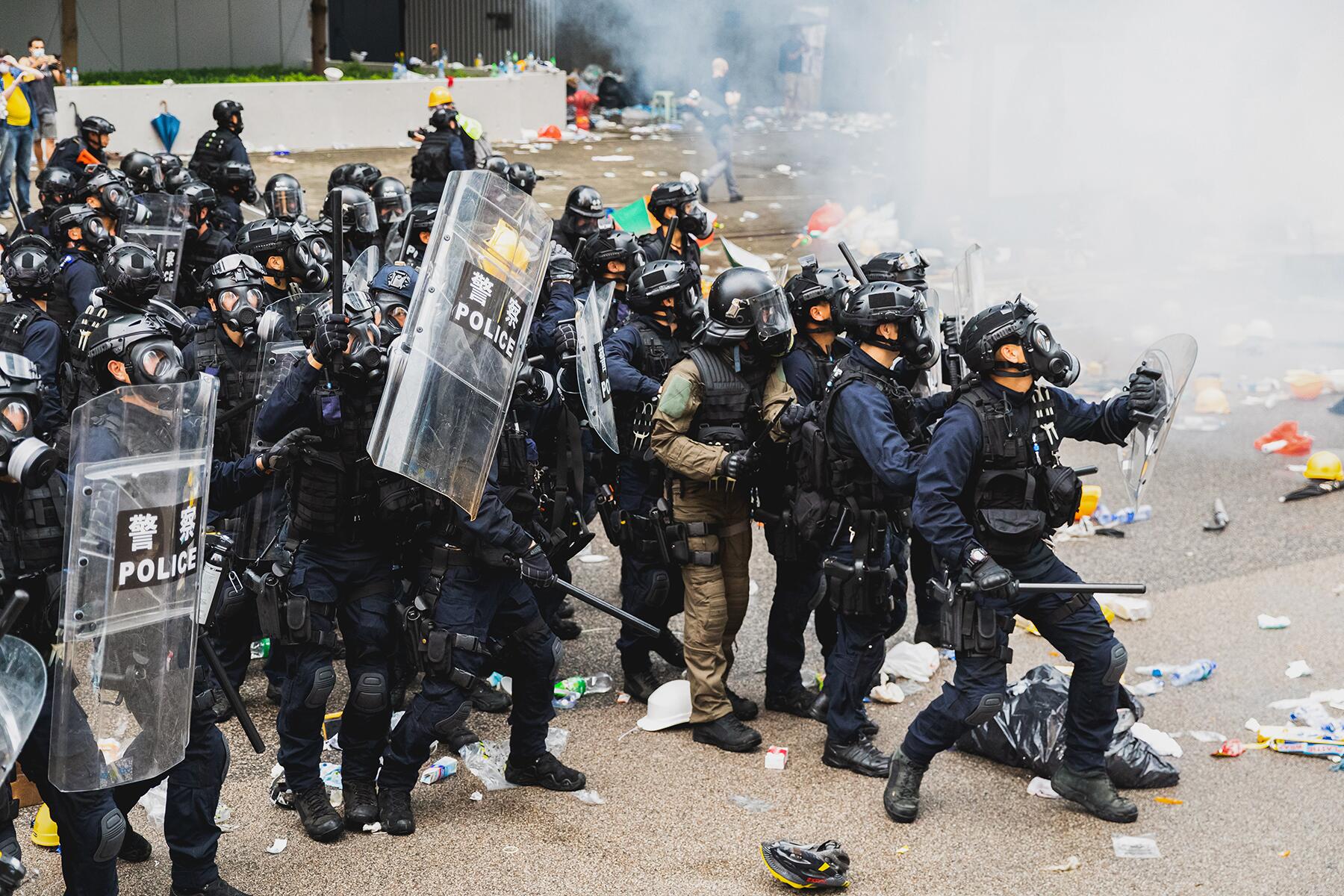 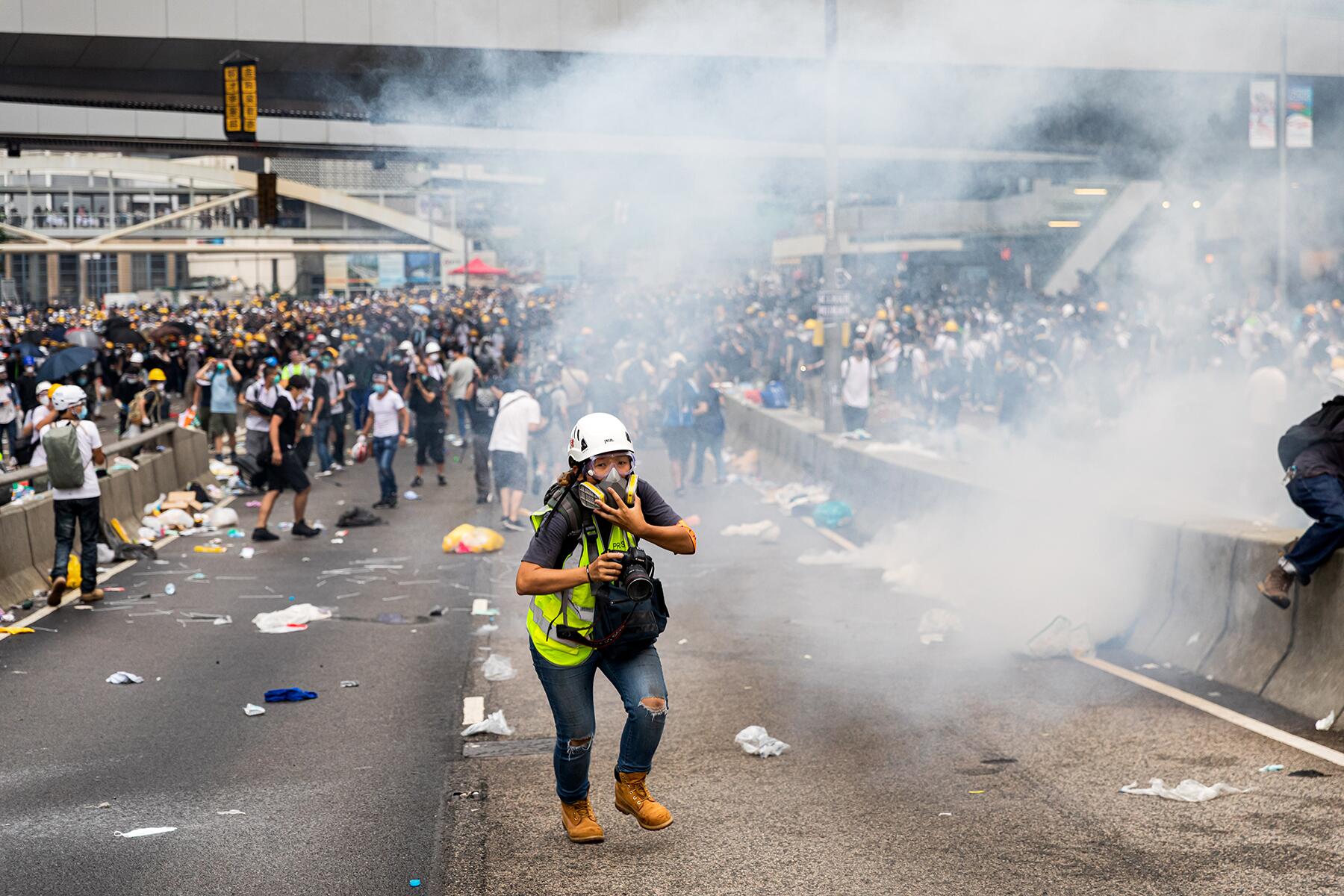 People were outraged and, the following Sunday, more than 2 million people by some accounts—roughly a third of the city’s 7.4 million residents—once again staged a march.

Carrie Lam has not yielded to any of the protesters’ demands, which include:

1. Total withdrawal of the extradition bill

2. Retraction of the government’s description of the protests as “riots”

3. Unconditional release of arrested protesters and charges against them dropped

4. An independent inquiry into police behavior

Her inaction has led to an escalation in the frequency of unrest—reaching a chaotic and troubling crescendo during a sit-in protest at Hong Kong International Airport (HKG), which turned violent this past Tuesday. After several days of demonstrating at the airport, protesters occupied the arrival halls and, later, a contingent blocked departure gates that evening. Since travelers couldn’t check-in or go through security, a second day of flight cancellations were forced.

“We can feel our freedoms shrinking.”

Protesters were primarily there to protest police brutality—specifically a case where a police officer is said to have shot a bean bag round into the eye of a female medic who will potentially lose her eyesight.

Why the airport? Activists want to reach an international audience with hopes that both business leaders and foreigners will support their call for universal suffrage and freedom from Chinese oppression. And of course, disrupting such a major international hub like HKG ensured that their plight would be watched around the world.

On Wednesday, however, the protestors issued an apology for their conduct at the airport the day prior, seeking forgiveness from travelers, journalists, medical staff, and police for disrupting flights and contributing to the violence.

Hong Kong is a special administrative region of China. As a semi-autonomous region, the city is governed by its own mini-constitution called the Basic Law, which allows broader personal liberties, including the rights to peaceful protest and free speech that are prohibited in mainland China.

The “one country, two systems” concept was proposed in conversations leading up to the 1984 Sino-British Joint Declaration between China and the British Empire, which had ruled Hong Kong for 156 years. The idea was to ensure a peaceful transfer of power and afford Hong Kong citizens with a “high degree of autonomy” for 50 years, beginning in 1997 when the British transferred sovereignty of Hong Kong to Beijing in what was called the “handover.”

Over the past two decades, however, many Hongkongers have felt that the Chinese government has not-too-discreetly infringed on their autonomy and freedoms. For example, the central government has abducted Hong Kong bookstore owners selling books banned in China, disqualified pro-democracy candidates from local elections, and has played too large a role in appointing the city’s leaders.

The perception of shrinking personal freedoms—combined with a sky-rocketing cost of living, stagnating wages, and the world’s most expensive housing market—created the conditions for the ticking time bomb that first went off in 2014 during the Occupy Movement (also referred to as the Umbrella Revolution), which saw more than 100,000 people take over one of Hong Kong’s major highways from September 26 to December 15. Most protesters eventually elected to leave the areas, while a small handful refused to budge and were arrested.

“You can see that the new generation of Hong Kong people has a very clear understanding of rule of law, because a lot of post-’80s and post-’90s are well educated, so they do not accept mainland China’s policies,” explains Mei Kwan Ng, a well-established Hong Kong writer and poet who supports the protests in Hong Kong.

“Since 1997, Hong Kong people have seen the castration of their freedoms. We still have freedom of speech but due to the increasing exchange between Hong Kong and China, a lot of our government officials have adopted the culture of the Chinese government. We can feel our freedoms shrinking.”

Where Are The Protests? And How Often?

Nearly every other day, at locations across the city, including many popular tourist destinations such as Causeway Bay, Victoria Park, Tsim Sha Tsui, Mong Kok, Central and Sheung Wan. Protesters have adopted a spontaneous, elusive strategy to “be like water,” which was adopted from Bruce Lee’s famous saying, “Be shapeless, formless, like water.”

That makes it very hard to determine where they will turn up next if you’re not tracking their movements on social media or the local Hong Kong news. One night, for instance, a protest started in Mong Kok, only to break into several groups—some heading to the famous Star Ferry to dismantle a Chinese national flag, another group occupying the popular Nathan Road shopping district, and yet another blocking off the Cross-Harbour Tunnel which connects Hong Kong Island with Kowloon.

In nearly every case, the Hong Kong Police Force has tried to suppress and disperse protests using tear gas, rubber bullets, and pepper spray. This means that many tourist and residential districts are affected, and often passersby and onlookers have been caught up in the chaos.

How Will This Affect My Travel Plans?

If you’re visiting Hong Kong, view this situation as an opportunity to go beyond the main tourist spots like The Peak and the Big Buddha to educate yourself about the residents’ concerns—not only to better understand the reasons behind their civil disobedience, but also to have a good handle on the city’s history and culture.

In short: You will likely be inconvenienced at some point during your trip to Hong Kong, but this is the protestors’ home and it’s important to remember that you’re a visitor—if you can’t stomach a holiday that’s a little less than ideal, we’d encourage you to choose another destination at this time.

For those who are curious about the protests, we’d recommend visiting a demonstration during the day that’s been approved by the police (protesters need to apply for permission to assemble) and leaving before dark. During the day, marches and gatherings are usually peaceful and it’s easy to converse with protesters (many of whom speak English) in order to learn more about their grievances. However, attending a rally has its risks and you could get caught up if the protest turns violent.

“It’s also worth visiting the Lennon Walls,” says Ng. “They are quite safe, and the one in Tai Po is a destination because you can find a lot of graphics and English explanations there. I think the Lennon Walls best reflected the anger, worries, and demand of the citizens. And travelers will also have a chance to speak with Hong Kong people there.”

That being said, the U.S. State Department recently raised its travel advisory level due to “civil unrest,” so visit Hong Kong at your own discretion. Thus far, protests have included everything from a citywide strike–which led to flight and public transit disruptions–to a wide-scale occupation of major arteries.

In short: You will likely be inconvenienced at some point during your trip to Hong Kong, but this is the protestors’ home and it’s important to remember that you’re a visitor—if you can’t stomach a holiday that’s a little less than ideal, we’d encourage you to choose another destination at this time.

To navigate around the protests, buffer extra travel time and stay on top of the latest news. We’d recommend tracking major hashtags such as #HKProtest and #antiELAB. In addition, websites such as CNN and South China Morning Post (Hong Kong’s leading English language newspaper) provide live blogs with the latest insights.

“I think Facebook and Instagram are also good sources—protesters are posting their schedules on the internet,” says Ng. “They share when and where they will conduct the protests so tourists can stay up-to-date.”

In terms of transit to and from the airport, if there is a potential protest at the airport on the day of your flight, we recommend arriving at least three to four hours earlier than usual in order to clear security as quickly as possible.

Typically, passengers who are already through immigration and security will fly, particularly if booked on international flights. Whereas if you wait too long to get to the airport, protesters could block the pathway to the departure areas, and you’ll miss the flight. We also recommend that you purchase travel insurance before your trip to ensure that, if anything were to disrupt your travel, you will only lose time, not money.