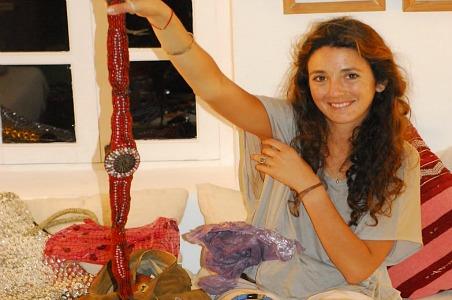 In 2010, with an itch for travel and an eye for fashion, Joey Wölffer launched the Styleliner, a mobile boutique (think food truck, but for lovers of style). Finding that first truck wasn't without its challenges for the former jewelry designer: “I sent my husband on a wild goose chase, to all the food trucks in New York to find out where they got their vehicles,” she explained. “But nobody would tell him! They're very competitive.” Eventually someone did give him a name, and the Styleliner got its wheels, peddling unique global accessories that Wölffer procures from her travels all around the world. And if Wölffer's name already sounds familiar, it's probably because she also co-owns her family's gorgeous Wölffer Estates Vineyard in Southampton, her home base when she's not trotting the globe.

We recently spoke with Wölffer who shared haggling tips, and ways to find unique items when traveling; plus, she shared what may just be the world's most romantic desert proposal.

What's the most unexpected thing you've found in your travels when looking for items?

I'm always stunned by every place I go. Because you see images, and then you actually go to the place and get into the culture and it's even more fascinating. We were just in Ecuador and we stopped by the house of Miguel Andrango, a 70-year-old man in the Otavalo region. You see so much embroidery in Ecuador, but then you're in this actual man's house, where he weaves everything by hand and the detail is so much greater. Nowadays, there's so much done by machine, so you really miss out on that hand touch. And I think that's what always stuns me when traveling, just how much is actually done by hand. The quality, the detail, and how long it takes! A big embroidered blanket takes four months. So, I think it's detail and it's the workmanship that I’m always shocked by. Because now in any market you have to really sift through the junk, because a lot of it is not made by people anymore.

What are some tips for folks looking for unique items in a country?

I think it’s about talking to locals. People like to talk to you, if you’re foreign. If you can find information before you go from trusted friends, that's good also. But I also think it’s important to explore. Because in general you know the areas to visit—every guide tells you the areas to go, so just head to the areas and explore, talk to people. It’s the only way to get to know a place. But also with some places, like Marrakesh, there's so much information out there on who to go to and not to go to.

When I went to Marrakesh it was five years ago—we actually got engaged there—but it was not quite as written about at that point. I think the reason I love Marrakesh so much is because we had the most magical trip. We rented a really funny car and drove all around Morocco. And we went on camels down to the desert and my husband proposed to me at 3 in the morning underneath the desert skies. It couldn't be more romantic. So that trip is so special to me because of that, too.

Where would your recommend eating in Marrakesh?

The Café des Epices, which is a “Spice Café,” is a cute, authentic rooftop space for lunch. It looks over the medina—the big market with vendors and stalls. It's probably my favorite place. And if you need a thin-crust pizza fix, we discovered Catanzaro. Because there's only so much tagine you can do.

Do you ever eat street food?

My husband, Max, is the king of street food, because he grew up in Indonesia. But I have to tell you, I can't do it. I'm not high-maintenance in any way, but I'm prone to get sick. But he eats everything. We were in the markets in Otavalo in Ecuador recently and there was a hailstorm. It was 75 degrees and sunny and all of a sudden we were pelted with ice! We followed all the local people, because you know they’re going to eat well, to this shack on the side of the road that was basically street food. Everyone from the market was in there. We sat down, and they just bring you food. You don’t order. They bring us a soup and I look down and I’m like “oh, chicken soup. A perfect thing for a cold day.” And I put my spoon in and there is a chicken claw in there. Just a skinned chicken boiled claw. I freaked out, but in a funny way—I didn’t want to be disrespectful. But all the people in the restaurant started laughing hysterically at me. The chicken soup was the most delicious thing ever, but there was no way I was eating the claw. So my husband ate it.

What would you do for nightlife in Marrakesh?

I’m not really a nightlife person. But I’m sure the nightlife there is amazing—it’s probably the one place to go clubbing. Just because every detail is over the top. There’s a hotel called La Mamounia, which is an amazing luxury hotel. I’ve never stayed there because it’s extortionist, but it’s like living in a palace. The decor is insane. We did go belly dancing at Le Comptoir for entertainment, which is kind of embarrassing, but sometimes you have to have a cheesy moment. It was the craziest place, a lounge and restaurant. The food is good, but you don’t necessarily go there to eat. It's more for the atmosphere and the lifestyle.

Where would you recommend staying in Marrakesh?

We were hoping to stay at the Villa des Orangers, but it was booked. When we traveled around Morocco we stayed in less fancy places, to get into the culture, but in Marrakesh we wanted to do it up a little. My favorite place where we stayed was the Riad Samarkand. Basically we were in somebody's home, but we were the only ones there. It was just like going back in time. When we arrived in Marrakesh, it was 10 at night and we were going through the medina to get to the hotel and it was really overwhelming. But then you go to these riads and they're magical and luxurious and private. To come back from the medina, which is so intense, to quiet and peace is really nice.

So what sorts of places do you gravitate toward, hotel-wise?

I don't like big hotels and I don’t like overly fancy hotels. I prefer a boutique hotel. I like personality and design. And clean is a must. I don't want to spend all my money on a hotel either, because I like to shop a lot. And I never spend any time in a hotel. You're always out, so it never makes any sense to me. You want to get involved in a culture. That's the best part about travel—losing oneself in another culture.

What's the favorite hotel you've ever stayed in?

It was in Morocco, one called Sawadi, an eco-lodge run by a French couple in the Palmeraie of Skoura, an oasis close to the city of Ouarzazate. It was an all-organic farm—meats and vegetables in the delicious Moroccan meals came from the farm—in a tiny town. They had beautiful grass and tiles and decor. It was like a gem.

You're a self-described haggler. Do you have any tips for first-timers who don’t know how to haggle?

I get high off of haggling. First of all, you have to haggle. You can not just give them the money. Because they’re marking it up like five times already. And if you really believe in a price and it’s not disrespectfully low, and they won’t give in, walk away and usually they’ll come after you. I once got chased down the street. My strategy is always just go half immediately. Because I know they’re not going to agree with what you offer, ever. So I always go half, and usually they have this whole act. In certain places you can haggle more, in Marrakesh you can certainly haggle a lot. In Ecuador, the haggling culture wasn’t as big. It was a little more difficult.

Where in Marrakesh do you shop?

I do go through the stalls in the medina. There’s also this place that is incredible called Mustapha Blaoui, which basically has selected from all the artisans all over into a huge store. We bought three beautiful old photographs there, already framed, and carried them back with us. It’s also good to go into one of those because it’s full of good stuff, and it’s also like a museum of furniture, clothing, and homewear.

I should probably ask about wine too, given your background. Do you ever try local wines when you travel?

Definitely, and a lot of times I’m shocked by how bad it is. Not that I’m the mecca of wine taste, I don’t necessarily know that much about it. But every region has a different flavor. But I can tell you I did not like Moroccan wine very much. We did have good local wine in Ecuador, though.

What’s the one thing you never travel without?

I never travel without my notebook. It’s the most important thing. Notebook and Chap Stick.

What’s the key to being a stylish traveler?

This is a funny question. My last trip, I brought three pairs of pants, two dresses, and I brought a lot of tops. Don't put together too many outfits. I think that is the key. Don’t overdo it and don’t overthink it.