News Apeksha Bhateja What Are the Chances You'll Get Monkeypox at a Hotel?
NewsWhat to Expect on a Viking River Cruise

What to Expect on a Viking River Cruise

River cruising is a unique category of vacation. Different from ocean cruising, it more closely resembles a land-based trip with a quality tour operator…except your hotel floats on a river. Previous vacations don’t provide an accurate reference point for first-time river cruisers, so oftentimes they don’t know what to expect. This can provide pleasant surprises. But unclear expectations can also lead to disappointment, particularly because river cruising is a premium price-category vacation. It’s especially important for passengers to feel they’re getting value and service for their dollars. 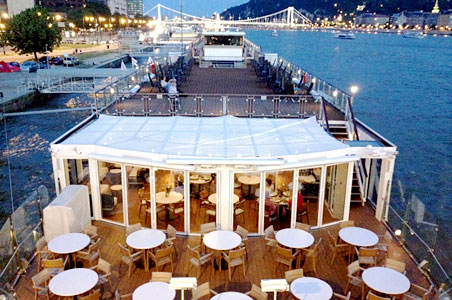 On a wondrous journey from Hungary to Germany my wife and I witnessed Viking’s expert captains and crew navigate an epochally swollen river, juggling ships and itineraries, and more important, managing their customers’ many expectations.

The main dining room is a core experience of the Viking cruise. It’s an elegant space with table settings for six. Seating is unassigned, making every meal an opportunity to get to know your fellow passengers. Honestly? The prospect of sitting with strangers at every meal had me a little concerned about small-talk fatigue. I figured my wife and I would need to take refuge in the quieter Aquavit lounge fairly often. We never did. Not only did we consistently desire the full menu of the main dining room, but also we consistently enjoyed the company of the different people we met at each meal. The majority of Viking passengers are 55 and above, active with a capital A. They’re highly experienced travelers, mostly from the US, some from Europe, and they are often spirited raconteurs who can quickly turn polite conversation into lively dialogue. 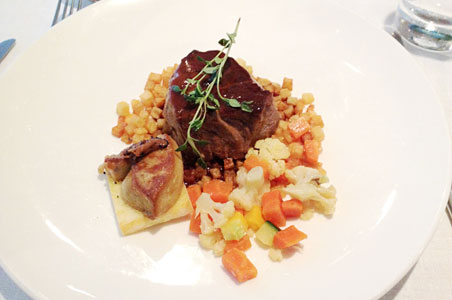 I consider myself more an eater than a foodie. For the most part, I favor hearty, unfussy meals. Viking’s daily menu features offerings like "butter poached jumbo prawn and saffron vanilla beurre blanc" or "farfalle salmon," which really amounted to a decent shrimp in butter sauce and a palatable smoked salmon. The haute-gourmet suggestion of some of the dishes is a slight over-reach considering that Viking’s primary kitchen appliance is a convection oven designed to ensure that multiple meals can be heated and served with little delay. Feeding nearly 200 people simultaneously favors a catering-hall efficiency over epicurean complexity.

This, however, does not mean that the chefs sacrifice creativity or flavor. Their rosemary lamb or pork medallions may lack a fire-roasted/baked-crisp-to-perfection delicacy, but these and other meat and fish dishes were always tender and flavorful, prepared with modestly inventive sauces. And there’s plenty to like about the Viking menu. Lunch and dinner options often include regional dishes from the ports of call, like a Bavarian meat platter or Hungarian goulash. Herbs come from an organic garden on the sun deck. Satisfying chicken, fish, and steaks are available every night, as are vegetarian options. Accompaniments include warm breads, complimentary wine and beer, and a killer cheese platter my wife could not resist. Sorbets, tarts, cakes, pastries, and other sweet treats were served for dessert.

Overall, eaters should be pleased. 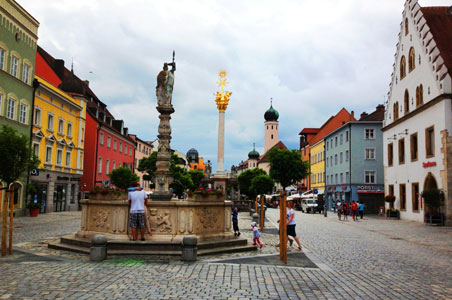 Driving through the Austrian countryside, I noticed that nearly every rooftop, from dilapidated farmhouses to tidy estates, is covered in solar panels. As we passed rows of the glinting onyx squares, I wondered: If everyone were this eco-conscious, would we be sailing down the Danube right now instead of sitting on a bus? Would the 500-year floods we were forced to circumnavigate by motor coach have occurred? I’ll save the whole global-warming debate for more political venues, but as far as travel is concerned there’s no denying that increasingly erratic weather patterns are creating more frequent vacation disruptions.

Under normal conditions Viking longships require special design features to pass beneath the Danube’s many low bridges, and still it can be a game of inches. One or two downpours and you could find yourself on a trip that requires minor or major adjustments. And it’s not just high waters. In 2011 a summer heat wave and autumn drought reduced much of the Danube to its lowest level in 25 years, making sections of the river too shallow for ship passage.

Thankfully, weather-related disruptions are not yet inevitable, and this isn’t an issue only for Viking—a rising river lifts all boats. Viking did demonstrate, however, that it is uniquely positioned to rise above the rest.

Viking has the largest fleet of any European river cruise company. They have more than 30 ships sailing the Rhine and Danube, with more than half built in 2012 or later. Their nearest competitor has fewer than 15. Viking can deploy a sister ship or better to a port that is inaccessible to a vessel up or downstream. This means that if you have to change ships, you’ll likely transfer to one that’s either exactly the same or newer.

Because our voyage fell just 10 days after the aforementioned 500-year flood, we met our originally scheduled ship, the elegant 2012 Odin, after a three-day journey on its newer sister Bragi. Was ship-hopping fun? Was missing a very scenic portion of the Danube desirable? No. But the crew made it as painless as possible. When the Danube gave us lemons the Viking staff gave us lemonade—or lemon-drop vodka martinis, or whisky-sours, or whatever cocktails we desired during a free open bar. Nothing like free spirits to lift your spirits.

Side Trips and Strauss 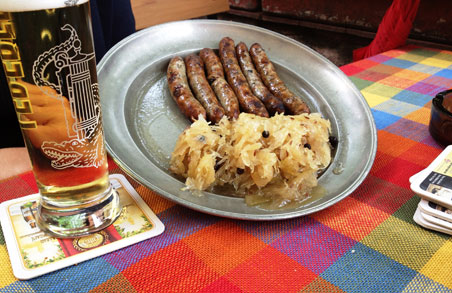 Also, our detour resulted in two experiences that became highlights of the trip. We docked in the town of Straubing, Germany, which is not a normally scheduled port. My wife and I grabbed two new friends, a couple from California we met at dinner, for a spontaneous excursion. When you’re in port, coming and going on a Viking ship is easy—there’s none of the infamous "herding" that’s native to ocean-liners. A cab met us at the end of the gangway, and we made our way to Straubing’s town center. It. Was. Beautiful. We strolled the cobblestone streets of the town, took photos beneath a romantic fountain, and peered inside a spectacular 17th-century church. I also discovered that walking past German outdoor cafés can trigger an irresistible craving for beer and latte at the same time. After surveying our café-filled surroundings, we agreed on Café Schmidt for a round of beer, hazelnut cake, lattes, and beer.

Additionally, Viking waived the fee for one of their best optional excursions. In Vienna, every passenger was invited to Palais Augsburg to see the illustrious Vienna Residence Orchestra perform selections by Mozart and Strauss. In a period ballroom (a little on the warm side in the summer, dress light), we were treated to pieces from Mozart’s Magic Flute and select Strauss waltzes by a ten-piece ensemble accompanied by costumed dancers and singers. 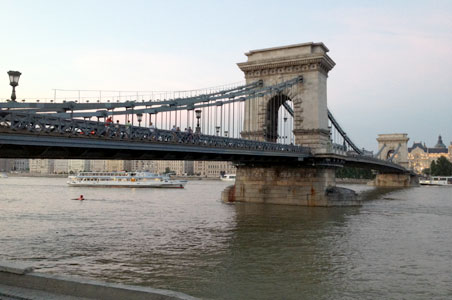 Here in the Fodor’s office there’s a debate over what constitutes a full enough visit to claim bragging rights. Can you add to your tally of visited countries a Caribbean island your cruise ship docked for the day? Does leaving the airport on a long layover count? Can you include a state you’ve driven through on a road trip? Unresolved. Regardless, I say that no matter how strict your list is, you have to count the destinations visited on a Viking river cruise. I can now indisputably claim Hungary, Austria, and Germany. I have legitimately explored Budapest, Vienna, and Nuremberg—and this is without the pre/post cruise extension options (which are Prague & Budapest for the Romantic Danube itinerary).

Viking does a terrific job of what I call instamersion—your time in each port is brief, but you’re instantly immersed. Between local entertainment that is brought onboard nightly, cultural/historical lectures by the program director, regional dishes prepared by the chef, and informative docents, you get an excellent feel for the places you’re visiting. Each evening, the Viking Daily is delivered to your stateroom, and it not only provides schedule details, but also interesting tidbits and tips about the day’s destination. For example, I found a primer on architecture to be invaluable. I mean, just saying "rococo" is fun enough, but actually being able to identify rococo architecture while touring Vienna is kind of awesome.

In Budapest my wife and I stood over the Danube on the historic Chain Bridge to witness the city’s spectacular play of color and light at sunset. High above the river bank, The Royal Palace took on an orange glow, while below the Danube shimmered bluish and pink, reflecting wavy cones of yellow light from rows of street lamps. That night a Hungarian folkloric band performed traditional music in the lounge. The following day our Budapest city tour included highlights of both the Buda and Pest sides, including Heroes’ Square, Fisherman’s Bastion, and Matthias Church. So, although our exploration of Budapest was brief, it was extensive and exhilarating. We were sufficiently instamersed!

At the same time there were a number of intriguing sites that whizzed by as we sat in a bus. Many sites passed by too quickly to process, and it made me feel a bit restless. But this, too, can be mitigated by expecting a decent amount of bus travel (detours not withstanding). River cruiseships simply can’t dock within walking distance of many important sites and the only way to get to them is by bus. Viking provides a fleet of modern buses that have air-conditioning, lavatories, and comfortable seating. Viking’s tour guides speak clearly, are full of fascinating information, and are sometimes quite entertaining.

So, yes, instamersion can be somewhat breathless. But free time is built into each tour, so for all the hasty explorations and transports there are also respites for quintessential experiences like a Linzer torte and coffee at a café in Vienna, or bratwurst and beer at a German pub. Jam-packed days are offset by relaxing evenings that provide iconic moments such as a sunset from the Chain Bridge or a performance of the Danube waltz on the Danube.