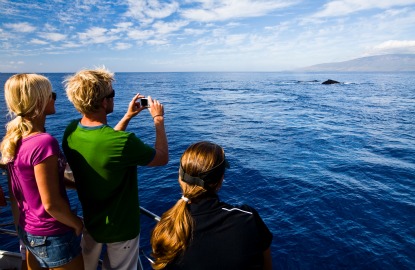 Every winter, when storms sweep through the North Pacific and the ocean gets particularly chilly, humpback whales head south—specifically to the warm waters of Hawaii’s Au’Au Channel alongside Maui. And if you’re hoping to catch a glimpse of these graceful behemoths, January through mid-March is the best time of year to see them. Here’s a rundown of everything you need to know for a great trip—including the best places for low season deals.

Where to Watch from Sea

It’s no wonder that Lahaina, the tourist capital of West Maui, is the best spot from which to witness humpbacks from sea—it a big whaling town in the 1800s. You’ll be floating amid the whales less than 15 minutes after leaving on just about any of the whale-watch boat tours out of Lahaina harbor.

An outfitter named Ultimate Whale Watch operates some of the most intimate vessels—rigid inflatables that hold no more than 12 passengers at a time. Alternatively, booking with the Pacific Whale Foundation guarantees at least a portion of your fee will support whale research.

Where to Watch from Shore

Scan the horizon from just about anywhere on the beaches of West Maui and South Maui this time of year and you’re pretty much guaranteed to see whale spouts and flukes. Still, some places are better than others.

The best: Kaanapali Beach, the resort area a few miles north of Lahaina. From the sand here, you can see mother and baby humpbacks breaching and flipper-slapping just a few hundred yards off shore. Farther north, atop the bluffs near The Ritz-Carlton, Kapalua, you’ll get the same show (just pray it’s not too windy).

Where to Celebrate Great Sightings

Witness a two- (or ten-) ton animal launch itself out of the ocean and you’ll want to celebrate the experience with a delightful tropical meal. Perhaps accompanied by a Mai Tai. Or a Pina Colada.

In the Lahaina area, swing by Kimo’s, a favorite of whale researchers since they started conducting research here in the late 1970s. In Kaanapali, try the “barefoot bar” area at the Hula Grill, where all rum drinks are served with cocktail umbrellas in Tiki goblets.

On the other side of the island, in Wailea, options are swankier; though the saltwater lagoon at the Humuhumu restaurant in the Grand Wailea Resort Hotel & Spa is over-the-top tropical, the drinks are spot-on.

It’s off-season in Maui through May, which means that most hotels—even the big and fancy ones—have availability for extended visits. It also means that certain properties (especially those in the Kaanapali area) have rolled out a variety of seasonal package deals tied to the annual whale migration.

One deal, from the Kaanapali Beach Hotel, includes four nights in a room with a view of the Au’Au Channel, a rental car, daily buffet breakfast for two, a bundle of beach amenities, and—of course—tickets to a whale watch trip. The price: $1,388, an overall savings of about 20 percent.

Planning a trip to Maui?

For up-to-the minute recommendations, planning information, and more, check out our online travel guide to to Maui—plus see our feature about Whales in Maui.