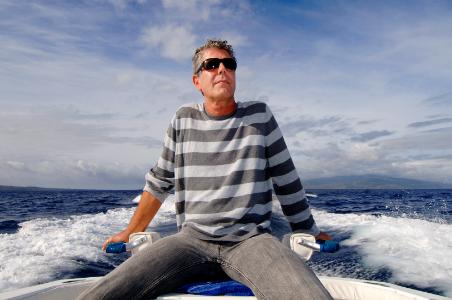 I’ve been reading a lot about Anthony Bourdain in the media hoopla surrounding the new season of Parts Unknown (the first episode, on Shanghai, aired Sunday). I was surprised to learn that he always checks a bag, though I applaud his reason for doing so. The fact that his first trip to Vietnam changed his life jives with my own transformative experience there; a 1999 trip inspired me to become a travel writer instead of a politico. The richest story dug deep into his worldview and creative process, with inspiring takeaways on being wrong about sh*t. Conveniently, one outlet rounded up the best quotes here. —Arabella Bowen, Editor-in-Chief

It's October now, so I reread Romantic poet John Keats' “To Autumn,” the perfect evocation in 33 lines of this “season of mists and mellow fruitfulness.” His descriptions of seasonal beauty, from watching ripening apples and fruits to hearing crickets and migrating swallows, are calm but complex. Keats recalls the vanished songs of spring and hints at winter but also reminds us (and autumn itself) of the special appeal of fall: “Thou hast thy music too.” —Linda Cabasin, Editorial Director

In the New York Times this week, Gustave Axelson reports on a new trend in Chicago: craft beers aged in bourbon barrels. “The result is a beer more complex than most, as additional flavors bleed from inside the staves—deeper woody notes that play to a beer’s bass and an extended taste that finishes with a nip of hard liquor.” Let’s just say I’m more excited than usual to visit my hometown for the holidays this year. —Michael Alan Connelly, Editor, Fodors.com

A friend told me about this fabulous article in Salon called “The craziest OkCupid date ever,” by Clara Bensen, about the man she had recently met and their decision to go on a three-week trip through Europe—with absolutely no luggage. I loved everything about it! And of course it made me want to jump on the next plane to somewhere with just my passport, wallet, and iPhone. —Caroline Trefler, Senior Editor, Cities and Cultural Destinations