The city of Louisville, Kentucky—one of the destinations featured on Fodor's Go List 2015—is quickly gaining a new reputation with travelers from all over the world. Known best for the Kentucky Derby and its production of bourbon, this city is now surprising visitors with its unexpectedly hip scene. From fantastic culinary options to unique shopping and attractions, the city is broken down into various small neighborhoods, each with its own appeal. Here are six neighborhoods you need to visit on your next trip to Louisville. 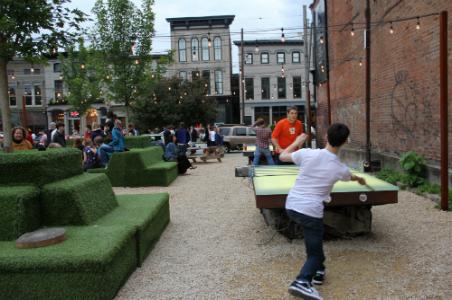 The East Market District has been dubbed “NuLu” (or new Louisville) because of its major rebirth in recent years. The neighborhood is a mix of art galleries, boutiques, specialty stores, and farm-to-table-focused restaurants. Bermuda Highway is a boutique and record shop owned by Katie Toupin, a member of local band, Houndmouth. The Flea Off Market (1007 East Jefferson Street, 502-552-0061) isn’t your typical flea market, as it featurees a beer garden and food trucks. Why Louisville is a one-of-a-kind experience souvenir shop that can’t be missed and even has a wax figure of Colonel Sanders. NuLu is also home to some great places to eat and play. Garage Bar has a big indoor and outdoor space with Ping-Pong tables that glow in the dark for nighttime fun. Experience the wonderful and surprising combination of locally sourced ingredients and Mayan cuisine from chef Bruce Ucán at Mayan Café. Take farm-to-table dining to the next level at Harvest, where you just might be able to chat with farmer-owner Ivor Chodkowski about how the ingredients on your plate were on his farm that morning. At Decca, not only can you enjoy inspired food from chef Annie Pettry, but also you can see local artwork, enjoy a cocktail on the patio, and listen to live music in the Cellar Lounge. 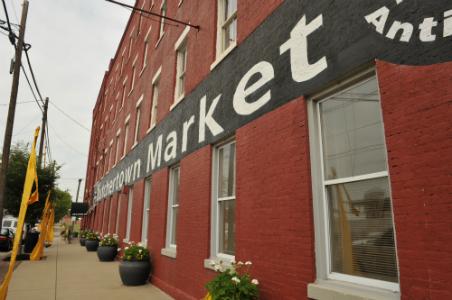 One of Louisville’s oldest neighborhoods, Butchertown is experiencing a renaissance of late with new distilleries, dance clubs, trendy restaurants, and Bourbon Country’s only brandy distillery, Copper & Kings. Take a tour of the distillery and then enjoy a sampling of their spirits in the rooftop tasting room, which boasts gorgeous views of downtown Louisville. Nearby Vernon Lanes is one of the oldest operating bowling alleys in the country. It’s also a live music venue and a bourbon bar that is a part of the Urban Bourbon Trail. Everyone is welcome at Play Dance Bar, the newest bar in the neighborhood. It caters to the LGBT community, and it is the place to be for drag shows and dance parties. Butchertown Market offers an interesting collection of small business owners, and it can easily occupy your afternoon with shopping and sampling. Don't miss Cellar Door Chocolates, which is famous for their bourbon balls. Moss Hill makes handcrafted lotions, soaps, and candles with specialty scents such as mint julep. Bourbon Barrel Foods sends products over from its adjacent factory, including bourbon-barrel-smoked spices and small-batch soy sauce aged in bourbon barrels. Locally crafted artwork and jewelry can be found at Work the Metal, along with clothing, handbags, and home décor. Coming in fall 2015 to Butchertown is chef Bobby Benjamin’s highly anticipated new restaurant and market, Butchertown Grocery (1076 E. Washington Street, no phone yet), which is described as a restaurant, bar, and social club. 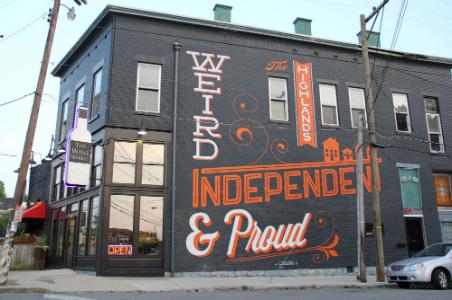 This area is as eclectic as it is charming. Here you’ll find Victorian homes and turn-of-the-century architecture along quiet streets, as well as vintage clothing shops, antique stores, tattoo parlors, and a bounty of bars and restaurants. The Highlands has been a foodie haven in Louisville for decades. Jack Fry’s and Lilly’s Bistro, long-time staples on the scene, are favorites for locals celebrating special occasions. You can also spy celebrity chef Anthony Lamas at his Latin restaurant, Seviche. If you’re in the mood for a more casual evening, this neighborhood is teeming with great pizza joints and pubs, not to mention the abundance of local breweries and beer bars. Great Flood Brewing Company and Cumberland Brewery (1576 Bardstown Road, 502-458-8727) both offer their own brews. The Holy Grale is the perfect place to find rare beers from around the world, and it has one of the best outdoor dining venues in town. The Highlands is a go-to neighborhood for nightlife: Bars close at 4 a.m. and there's a wide variety of options including karaoke bars, music venues, hole-in-the-wall bars, dance clubs and even El Camino, Louisville’s own tiki bar. 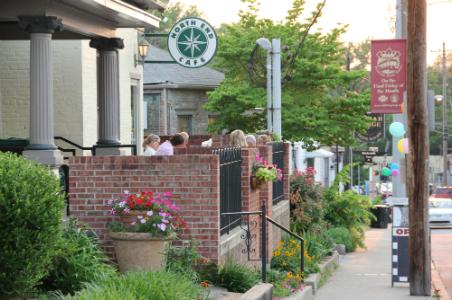 Named for its hilly location on the Ohio River valley escarpment, Clifton has tree-lined cobblestone streets, plenty of sidewalks, and lots of restaurants and niche shops. The main street through Clifton is Frankfort Avenue, and it makes for a great starting point to find places to eat and drink. With claims of being one of the best whiskey bars in the country, The Silver Dollar is worthy of a drink or two. Elsewhere, Apocalypse Brew Works has quickly become a part of Louisville’s craft beer scene and brewing tradition. It focuses on creating small-batch fresh craft beer with an emphasis on sustainability. For eats, Basa serves modern Vietnamese, El Mundo is a tiny Mexican restaurant, and Bistro 1860 features French-American fusion cuisine. Shopping in Clifton is as diverse as its cuisine scene. Guestroom Records is your rarely seen old-and-new record shop, and Elizabeth’s Timeless Attire sells strictly vintage clothing from 1860–1970. 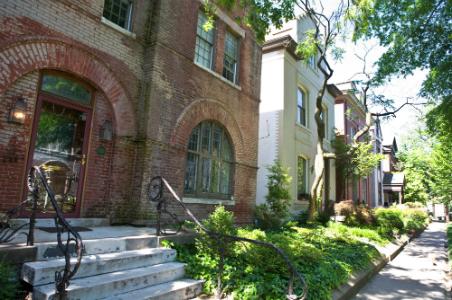 The largest Victorian preservation neighborhood in the U.S. sits just south of downtown Louisville. It’s also supposedly America’s most haunted neighborhood, and the nightly Old Louisville Haunted Tours have been awarded for being among the best of their kind. Old Louisville also has its very own Central Park, designed by Frederick Law Olmsted, the same man responsible for Central Park in New York City. The park is home to Kentucky Shakespeare, free Shakespeare performances that take place in the summer. The neighborhood also hosts the St. James Court Art Show, an annual juried arts and crafts fair that showcases 750 artists from North America on the first weekend in October, as well as the Garvin Gate Blues Festival, where many of the top names in blues music have performed in the free, annual two-day festival held the second weekend in October. But for the best dining in Old Louisville, make a reservation ahead of time at 610 Magnolia, which only offers one seating of fifty guests per night. 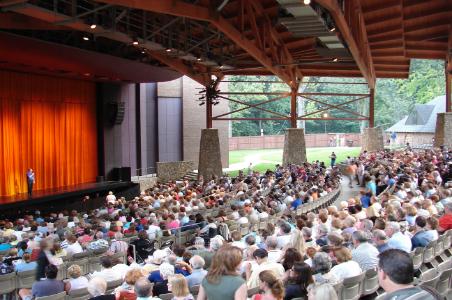 Home to the iconic Churchill Downs (site of the annual Kentucky Derby), South Points is one of the less-central neighborhoods, but one that still has plenty to offer. South Points boasts Jefferson Memorial Forest, one of the nation’s largest urban forests at 6,500 acres, making it a great place to picnic, hike, camp, and canoe. The neighborhood has some dining worth driving to, as well. Grind Burger Kitchen became so wildly popular with its food truck that it opened a brick-and-mortar location in South Points, which locals claim might be the best burger in town. Vietnamese food is also popularhere: Two hot spots are Vietnam Kitchen and Annie’s Café. But for some meatier options, try Shack in the Back BBQ.