Hidden in a cave and inaccessible to all but the most adventurous travelers, Yemrehana Krestos Church boasts some of the oldest artwork in all of Ethiopia--among other things.

There were several times throughout my journey to Yemrehana Krestos Church where I stopped and thought: I really shouldn’t be here. First off, it was unbelievable that I even made it to the church in one piece. The 12 miles of dirt road from the nearest town of Lalibela in the Ethiopian Highlands were fine at first, but when we started winding our way up Mount Abuna Yosef, I started to have second thoughts. The summit is the sixth tallest mountain in all of Ethiopia, and Land Rovers really should not dangle off the sides of mountains, especially when you can see through the rusted-out floorboards the empty air below. Just close your eyes, I said to myself. You’re a seasoned traveler. You can do this. And I did make it there alive, just as my guide Tariku promised that I would (over a truly astonishing amount of tej, or honey wine) the night before.

That night before, as we swilled our way through the truly delicious tej, Tariku suggested that I might like to see another church. He said it was different from all the others in Lalibela in that it was half a day’s journey outside the city and rarely visited by Western tourists. This one, Tariku told me, dated back to the 11th century and contained the oldest mural artwork in all of Ethiopia. Getting there would be difficult, he said, but worth it. I was sold.

INSIDER TIPTake care with tej. Though the local version can be bitter, the stuff offered to tourists is usually sweet and thick and masks its alcohol content, which is often upwards of 20%.

The Land Rover made it in one piece and deposited us at the base of a tall staircase lined with wooden slats that led up the side of Mount Abuna Yosef. The hiking definitely wasn’t easy here at almost 14,000 feet, but I pressed on, marveling at how quickly the local shepherd boys bounded up and down the stairs as if it were nothing at all. I smelled goats and firewood, but the air was clean so high up. The hills were green and gorgeous and there wasn’t another tourist in sight.

Finally, I reached the church. Or, what I was told was the church: all I could see was a dilapidated wall of cinder blocks at the entrance to a cave overhung with dark green vines. It looked like a bunker. A small man wrapped in the traditional white cloth of Ethiopian Catholic priests appeared from behind the wall and motioned for me to take off my shoes (as everyone does before entering Ethiopian churches) and step inside. When I did, I felt my breath catch in my chest.

The church is gorgeous. Unlike the other churches that are carved into the cliffs and hillsides around Lalibela, this one wasn’t carved into the rock itself: it’s built on top of the rock from horizontal beams of wood alternating with white stonework in stripes that look almost contemporary. It looked simultaneously completely out of place in the dark cave but also eerily appealing, like a beach house on the moon. I was desperate to go inside.

This was the second time I thought, “I shouldn’t be here,” because it was clear that visitors are rare at Yemrehana Krestos. The priest/caretaker hovered protectively around the church door and made doubly-sure my shoes were off before letting me step inside. Tariku explained that the priest was a little annoyed that Tariku had brought a woman visitor. Women aren’t allowed inside many of the Lalibela churches, but Tariku convinced the priest to make an exception by including a hefty donation to the church in the $100 fee he charged me for this side trip. Just in case, I slipped an extra 50 birr into the donation box outside the door to reassure the priest of my good intentions. It was hard not to feel humbled in the face of such history, and it was with a sense of reverence that I pushed the heavy wooden door open and carefully walked inside. 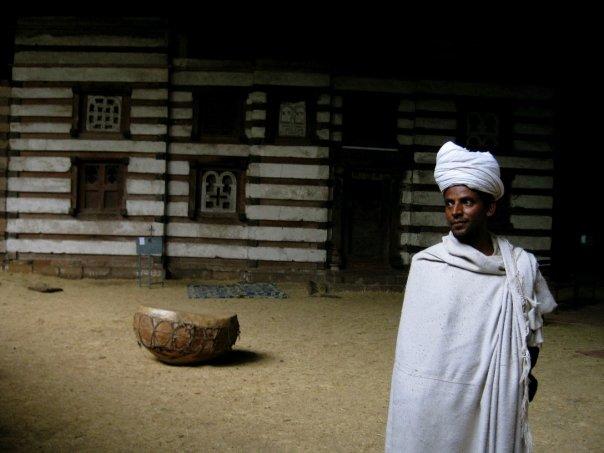 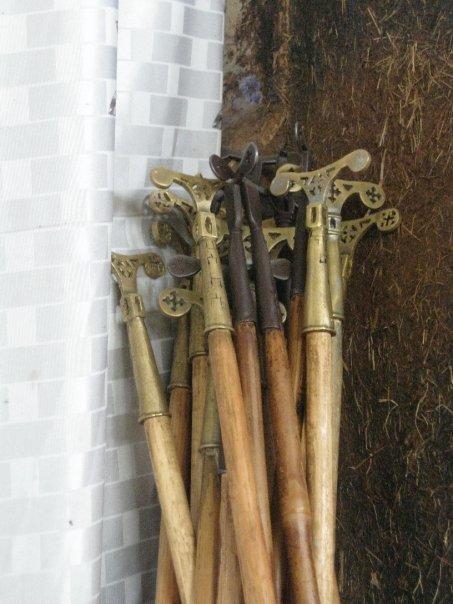 The interior was small, but elaborately decorated with murals on every surface from the floor to the ceiling. Tariku explained that the light color of the walls came from gypsum that was brought to the church by pilgrims from Jerusalem when it was first built. The painted murals on the gypsum walls featured lions, dragons, and monkeys, as well as churches and markets and row after row of priests in white robes, some holding crosses and some fighting men on horseback. Tariku went on to say that the churches in Lalibela were purposely built to be hidden from Muslim invaders during the earliest years of Christianity. While this church has been standing since the 1100s, Christianity reached Ethiopia as early as 300 AD and many of the churches that still stand today are older than any in Western Europe. Above my head, metal chandeliers covered in cobwebs hung in the still air. Though it struck me as very odd to see chandeliers in this ancient building, it fit with the whole moon-beach-house motif, so I just let it go, and decided to explore the grounds a bit more–and that’s when things got creepy.

INSIDER TIPYou almost always have to hire a guide when sightseeing in Ethiopia. While this may seem like an annoyance at first, it’s very affordable and well worth it. Your guide will be able to translate much more than your guidebook will ever tell you, as well as organize visits to out-of-the-way spots you wouldn’t otherwise know about. Talk to the manager at your hotel for a recommendation.

Behind the church, the cave stretched farther and farther back into the darkness. I carefully picked my way through the soft sand in my bare feet, leaving the light behind me and wondering how many years it had been since anyone walked where I was walking now. The sand was untouched and even the air felt old. After about 50 meters, the sand became coarse and gritty and I realized there were sticks poking out of the ground all around me. But as my eyes adjusted, I realized with a shock that the sticks weren’t sticks at all, but bones protruding from the sand. Human bones, hundreds of them, and skulls too, some with hair still attached to them.

This was the third time I thought, “I shouldn’t be here.” Though part of me was fascinated to see a cave full of human bones, the other half was horrified to be walking through what was clearly a holy burial site for these pilgrims. I immediately begin to retrace my steps, stepping extra cautiously this time to avoid stepping on a skull.

When I walked outside the cave, the air was bright and clean and the sun shone brightly. I shook hands with the priest and thanked him for the privilege of visiting Yemrehana Krestos–it really was like no other church I’d ever seen in Africa or Europe, and the fact that I was able to visit all alone was an incredible luxury. Though my heart pounded a bit at the thought of the long drive back to Lalibela on the mountain cliffs, I knew the trip was worth every second of death-defying Land Rover acrobatics. Yemrehana Krestos is not to be missed.