Step Into: The Great Gatsby

"I wish I’d done everything on earth with you," Daisy Buchanan (Carey Mulligan) coos mournfully at Jay Gatsby (played with typical brooding by Leonardo DiCaprio) in the new trailer for Baz Lurhmann’s ultra-luxe, ultra-stylized new take on the F. Scott Fitzgerald classic The Great Gatsby.

Well, if everything in the world is out of the scope of possibility for you, or if Leo is unavailable for the weekend, the north shore or "Gold Coast" of Long Island, the setting for the story of 1920s excess, offers almost as much. Live like a Daisy or Gatsby, minus the tragic love story, with a tour of the area’s vast mansions and estates, and revel in the shades of that roaring age.

There’s more to traveling like a Gatsby, though, than just booking it to Long Island. Why not dress the part? A few key things to keep in mind: In 1974, Ralph Lauren made the costumes for the film starring Mia Farrow and Robert Redford and it just so happens that his Spring 2012 collection was dripping with 1920s references like sweet ruffled shirts, bias cut dresses (in delicate floral prints), and flowing wide leg pants. Then, when it comes to accessories, look no further than chunky bracelets, big bold earrings, and a string of pearls.

Without further ado, here’s how you can step into The Great Gatsby this summer… 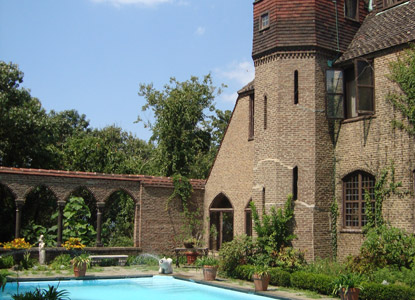 What to Do: If time is of the essence, consider a tour of Sands Point Preserve in Port Washington. This 216-acre preserve houses two major mansions – Hempstead House and Falaise – along with nature trails and a smaller mansion, Castle Gould (not open to the public). The imposing castle-like Hempstead House was the home of Daniel and Florence Guggenheim, and at its peak in the 1920s employed 17 servants along with groundskeepers, farmers, and sundry professionals, like a tennis pro.

Though now unfurnished, it was once a sanctuary of art and tapestry, with an oak organ in the foyer (just where you’d want one), a sunken court with exotic plants, and even an aviary. The other mansion, Falaise, was the 1920s home of Harry F. Guggenheim and his wife and, unlike Hempstead, it is still furnished. and displays 16th and 17th century art to make even the most opulent Fitzgerald character swoon.

Preserve hours are 9:00am – 4:30pm; daily Admission: $5.00 per car, $2.00 per walk in. Tours of Hempstead must be scheduled ahead of time. Tours of Falaise begin in early June and run Thursday – Sunday on the hour starting at noon with the last tour at 3pm. Tickets for tours are $10/person. SandsPointPreserve.org

What to Wear: Got a bit of a crush on that tennis pro? Dress the part. This Juicy Couture tennis dress is a classic for casual outings.

Where to Eat: "Famous since 1905," Louie’s Oyster Bar and Grille located on Main Street, boasts great views of the harbor and fresh seafood, like traditional fish and chips.

Where to Stay: Channel the art-deco glory of the 1920s at the Inn at Great Neck, close to shops and restaurants, and only 20 minutes from Sands Point Preserve. Rates vary but start around $249/night during the summer. 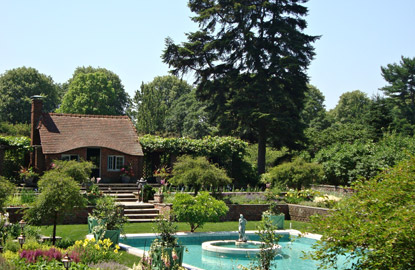 What to Do: Have a thing for speakeasies and flappers, or just want to take part in the American cocktail obsession? Head to Coe Hall at Planting Fields Arboretum for the mansion’s newest exhibit "Cocktail Culture: The Gold Glamorous Coast Years From Prohibition to 1960." Explore the history of the cocktail through Prohibition and the first half of the 20th century. High fashion abounds as the era’s signature designers’ works are also on display.

The mansion is open to the public for the season for self-guided tours, and there are twice-daily "Upstairs/Downstairs" guided tours offered that explore the lives of the servants at Coe Hall.

What to Wear: Snag that 1920s flapper style with this shift dress from Zara.

Where to Eat: If all that cocktail history makes you thirsty, head to Canterbury Ales Oyster Bar and Grill. Seafood is the order of the night, especially shellfish. The bar features ninety bottled beers from around the world and nine taps, a solid wine list and cocktails. Try an Oyster "Hot Shot"–that is, a shucked oyster in a shot glass with either pepper vodka and cocktail sauce or salsa and tequila. Scandalous, no? Daisy would blush.

Where to Stay: The second-largest private residence in America, OHEKA Castle was built in the early twentieth century as the summer home of Otto Herman Kahn, one of the original founders of the Metropolitan Opera. Today the French-style hotel houses 32 guest rooms and suites, and is about 20 minutes from Coe Hall. Rates start at $395/night. 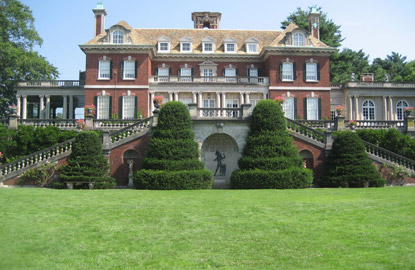 What to Do: Slightly older than some of the other mansions on the list, the English-styled Old Westbury Gardens sits on 200 acres of gardens, manicured grounds, woods, and ponds. Antiques and art work from the fifty years during which the Phipps family resided at the mansion are on view on both guided and self-guided tours. In summer, the grounds are used for concerts and exhibits, including this May’s Long Island Mozart Festival.

Open every day except Tuesday through October 31st, 10am-5pm (mansion opens at 11am). Admission is $10 with discounts for seniors and children. Tours of the mansion and gardens available every day.

What to Wear: You don’t have to own a mansion to dress like you do. This cheap and chic Old Navy cloche hat will really nail that 20s look.

Where to Stay: Relax after a day of touring at the vibrant Viana Hotel and Spa in Westbury, which proclaims itself as "Long Island’s only green built feng shui hotel." Rates vary by season but start around $250/night in the summer. 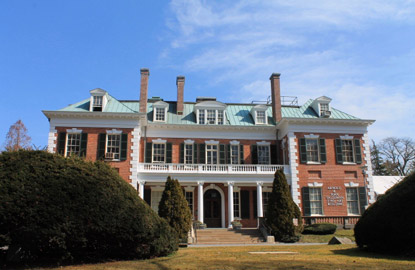 What to Do: If your perfect afternoon must include wandering through an art museum, then check out the Nassau County Museum of Art located on the historic Frick estate in Roslyn Harbor. Commissioned in 1900 by Lloyd Stephens Bryce and purchased in 1919 by Henry Clay Frick, the Georgian mansion sits on 145 acres and includes not only the mansion/museum but a Sculpture Park, Formal Garden, walking trails, and an Art School.

The museum is open Tuesday-Sunday from 11am to 4:45pm, with guided mansion tours available on Saturdays at 1pm. Tickets are $10 with discounts available for children and seniors.

What to Wear: Daisy would never been caught without her clutch. Check out this deco-inspired Venezia Convertible Clutch from Pour La Victoire.

Where to Eat: The steaks at Bryant and Cooper Steak House are prime fare, but lobster and seafood dishes abound as well. Make a reservation, as weekends get very crowded here.

Where to Stay: The Roslyn Claremont Hotel offers cozy, homey touches like chintz curtains and king-size canopy beds. Featuring 76 rooms and suites and a Library Lounge where you can enjoy hors d’oeuvres, cocktails and cappuccino in front of a fireplace, this hotel is about a six minute drive from the museum. Rates start at $235/night. 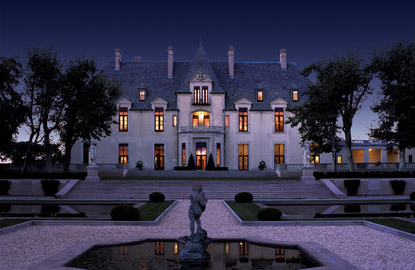 What to Do: The designers behind the Vanderbilt Museum and Mansion in Centerport have another rather important credit to their name–Grand Central Station. Completed in 1936 for William K. Vanderbilt II, the mansion, situated on Vanderbilt’s Eagle’s Nest estate, now hosts tours which highlight fabulous furnishings, art, and portraiture, as well as the servants’ quarters. Then, amble through rest of the estate’s collection of natural history specimens and artifacts, including a 3,000 year old Egyptian mummy. That’s right, there’s a mummy on Long Island.

During summer weekends, a "Living History" tour is available with actors portraying notable guests of the Vanderbilts, the Duke and Duchess of Windsor, as well as household staff. Open Tuesdays and Saturdays 11am-5pm and Sunday noon-5pm through June 17; Tuesdays through Saturdays from June 19 until Labor Day. Admission is $7/person with an additional $5 for a Mansion Tour.

What to Wear: The 1920s offered a new silhouette for women. Capture those straight lines with this Marc Jacobs tunic, giving it a modern spin with a pop of color.

Where to Eat: Centerport’s Mill Pond House offers a bit of everything–fresh seafood, steaks and chops, even sushi, and a raw bar. Patio dining is available, and be sure to check out daily specials and prix fixe lunch menus.

Where to Stay: For luxury seekers, the OHEKA Castle mentioned above (and pictured above) is the place to stay while visiting the Vanderbilt Estate. For a budget option, try the clean but no-frills Whitman Motor Lodge in nearby Huntington, with free WiFi, parking, and breakfast. Rates start at $99.95/night plus tax.