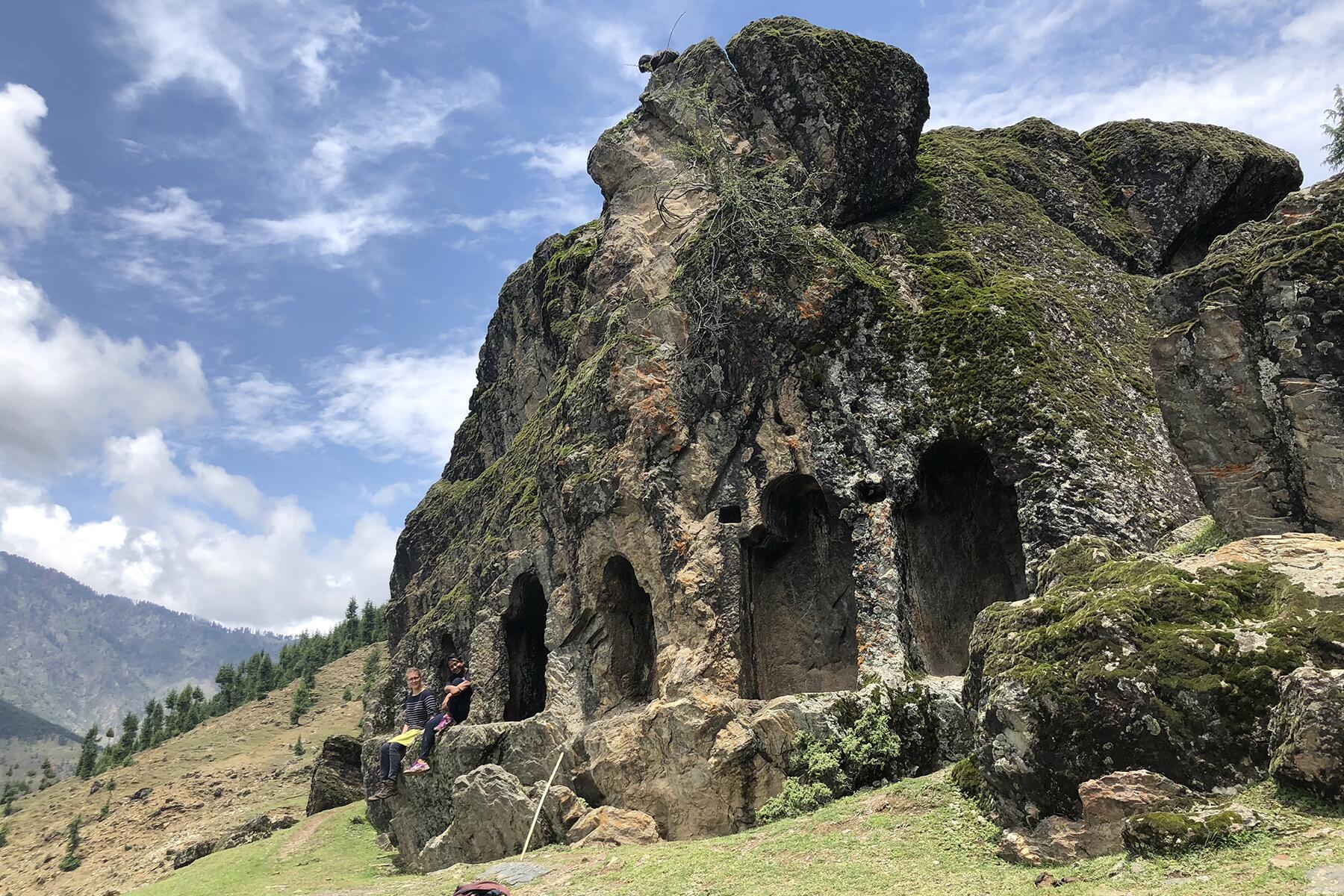 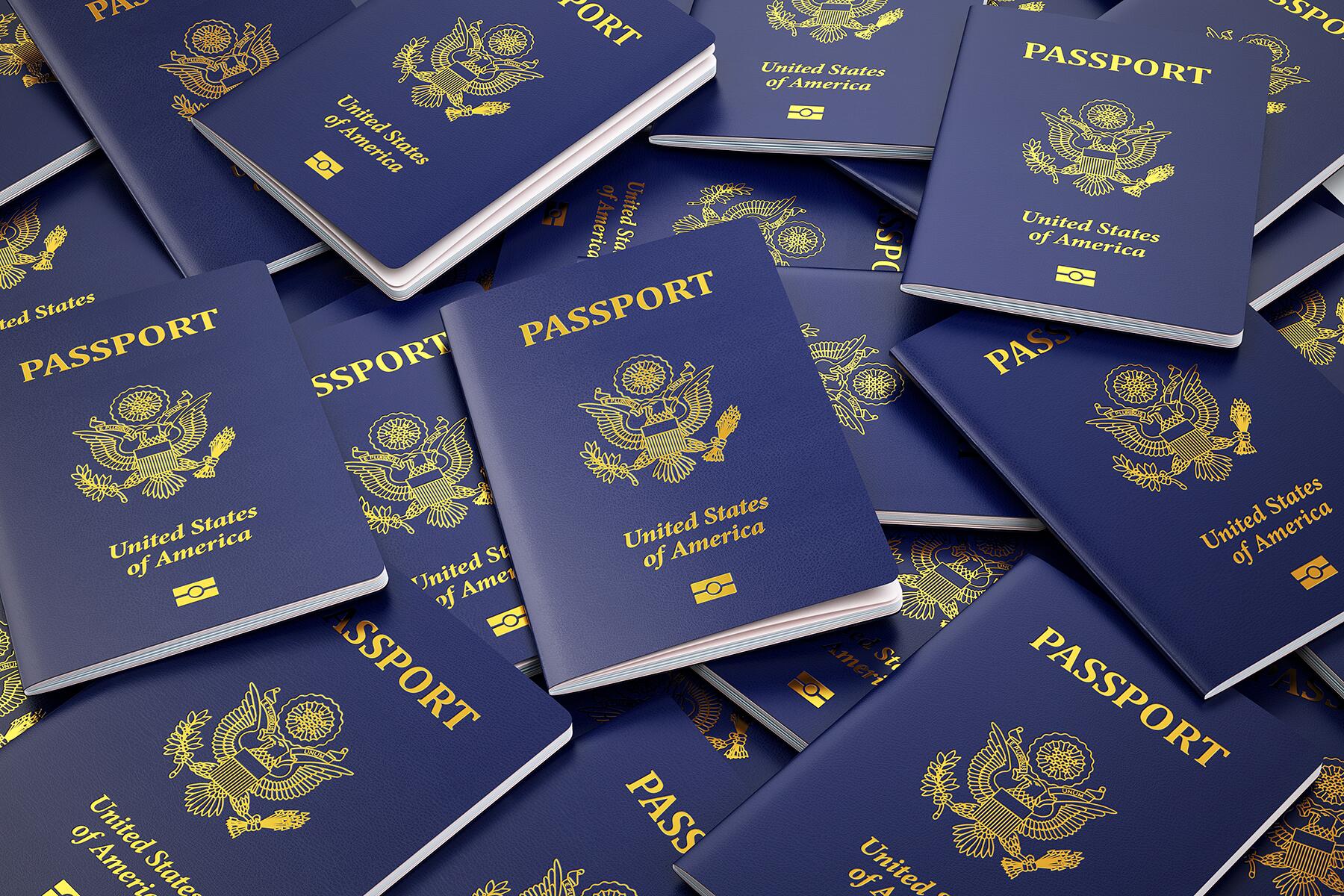 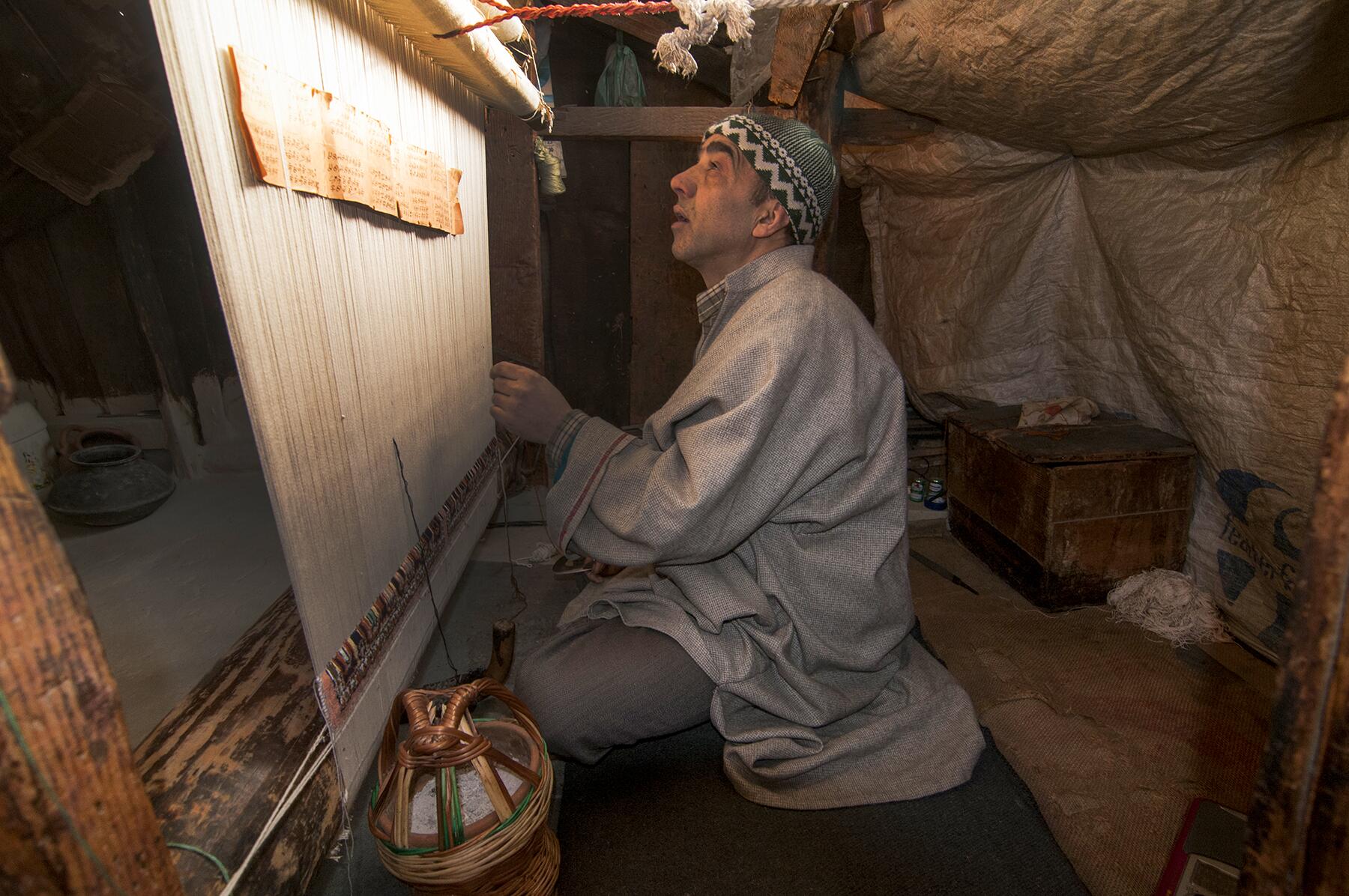 Houseboats in Kashmir’s Dal Lake are an experience in themselves. But in its 45-day long winters known as "chillai kalan," this snow-scaped paradise can become a frozen hell for its locals.

“This is Kanika, a journalist from Delhi. She is living on a houseboat during chillai kalan.” This was the proverbial “ice-breaker” that Kashmiris used for me every time I was introduced to a new person. It almost always started with awe and soon thereafter transformed into cold stares, almost as cold as the winter in Kashmir, stemming from disbelief.

Arts & Culture Sugato Mukherjee PHOTOS: A Centuries-Old Craft Is Under Threat by COVID-19
Continue Reading Article After Our Video

“Why would you do that to yourself? Who stays on a houseboat in winter? We don’t even stay in Kashmir during chillai kalan, let alone staying on the water.” What started as a joke soon became an inescapable reality. Winter in Kashmir is not an easy time, even more so for the inhabitants of the lake. 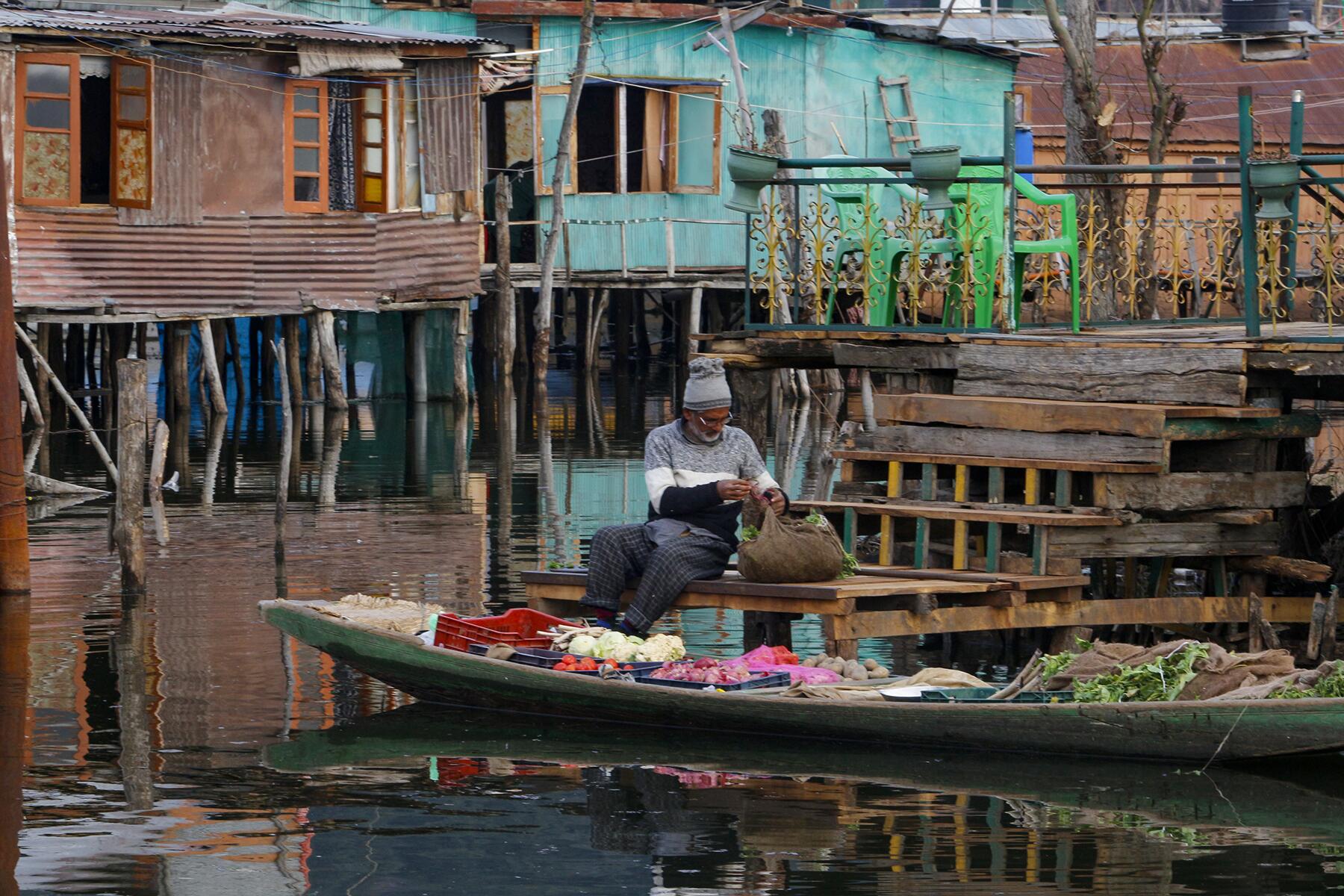 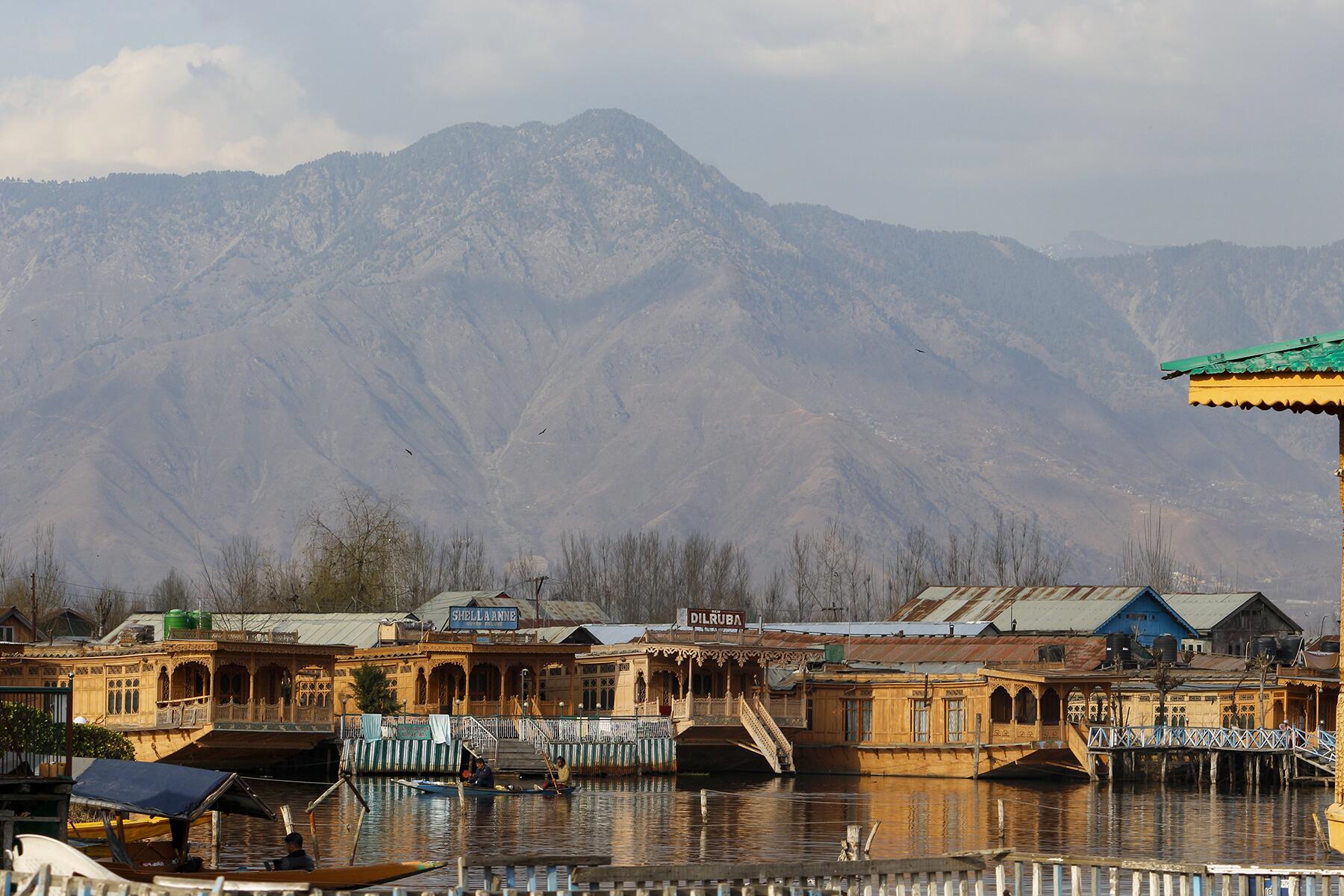 The glistening waters of Dal Lake in Kashmir’s summer capital, Srinagar, is a sight to behold in every season. In summers, it reflects the Zabarwan range off its glassy surface like a mirror, an almost obscene display of its beauty. In winters, the water freezes, bringing life as we know it to a complete standstill.

Anyone who has visited Kashmir in winter extols its monochromatic splendor in an endless diatribe. Its green-top perennial trees sprinkling powdered snow on its visitors like a happy landscape. The sprawling mass of white snow, the frozen Dal Lake, and its auburn trees still breathing fire from a not-so-distant fall season paints a colorful scenery that attracts tourists from all over the country and beyond. But looking at Kashmir with rose-tinted glasses is only half the picture. There is another side to it all, a dark side, that is elusive to its onlookers unless they stay long enough to become one with the valley.

When I arrived in the first week of January to Srinagar on an assignment, I was excited to be living on the lake. My houseboat was owned by a warm Kashmiri family who made the winter livable. I chose to stay with them, as opposed to a hotel or an apartment, because I wanted to help them through the tough times. Tourism in Kashmir had bled dry for the last two years due to two back-to-back lockdowns.

Known to be the world’s most heavily-militarized regions, India-administered-Kashmir lost its semiautonomous status on August 5, 2019. A communication blockade and strict curfews were imposed. Every tourist in the valley at the time was asked to leave immediately. The air was thick with fear and uncertainty. The valley that relies heavily on its tourists came to a screeching halt. It took six months for things to start moving again when another blow to the tourism industry came—a nationwide lockdown due to COVID-19. Every hotel, houseboat, and tourism-related ancillary industry lost all hope. 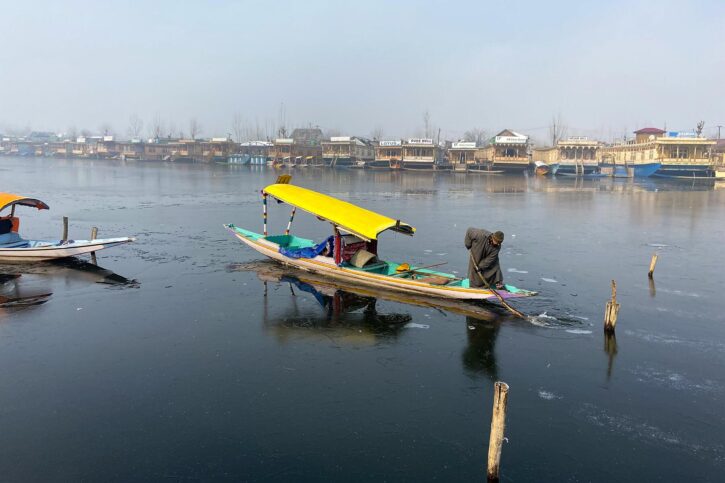 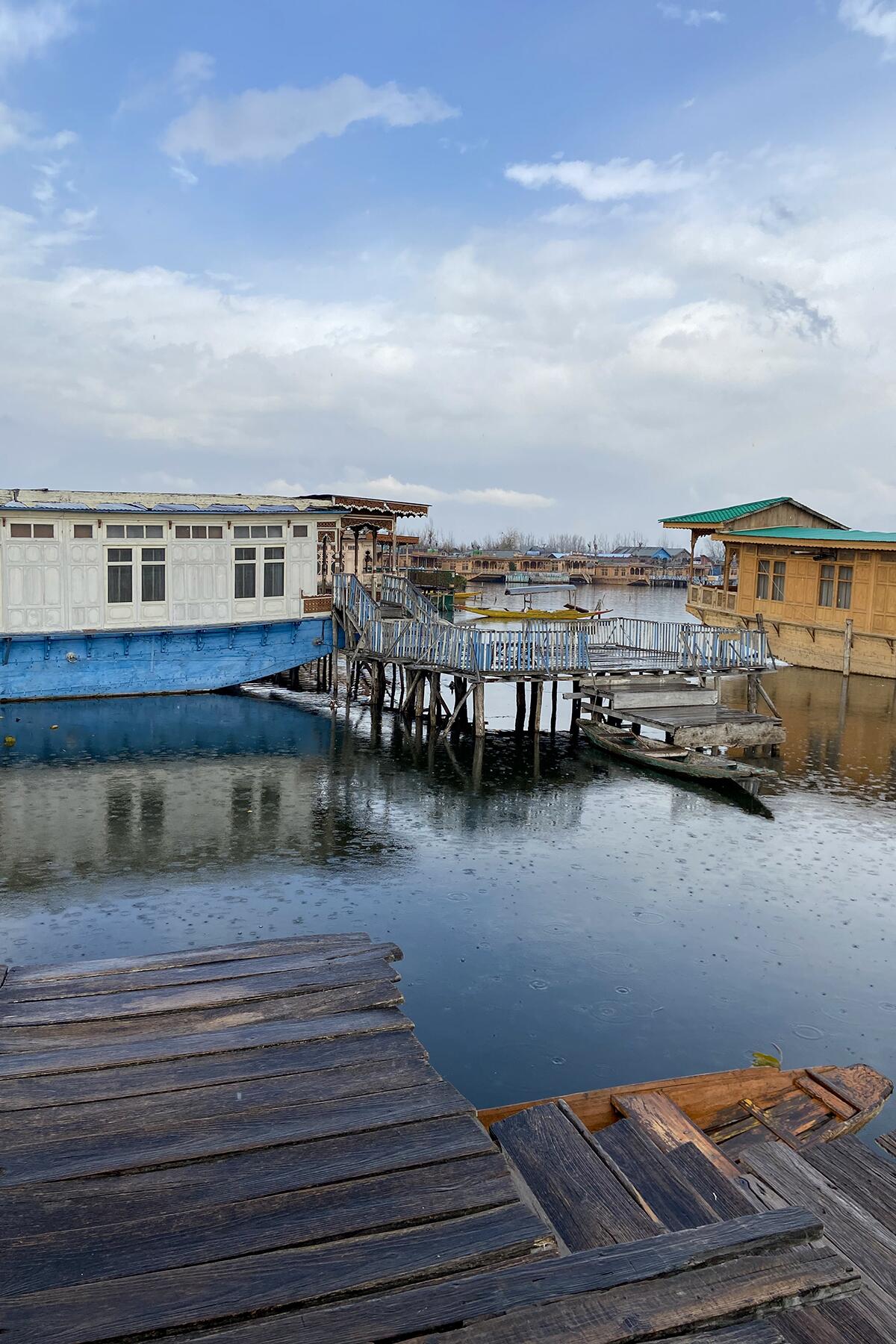 For two years, the families living on Dal Lake who depend solely on the income generated from tourism, scraped through the bottom of their savings to stay afloat, literally and metaphorically. My decision to stay on a houseboat for the time I was working in Kashmir was to pay back its hospitable community when they needed it the most. In my head, it was a righteous thing to do. But I completely underestimated the wrath of winter that had befallen the valley. It was the coldest winter Kashmir had seen in 30 years. I was in the middle of it on frozen water, no less.

The day I arrived, the temperatures dropped dangerously low and Srinagar witnessed its coldest night in decades. I woke up the next morning to a frozen glass of water, frozen pipes, and a frozen lake on which my boat was moored. I heard the commotion outside my room—the houseboat owner was working knee-deep in water to unclog the frosted pipes. The matriarch, his wife and a mother of three, was carrying buckets of hot water on a slippery snow-covered ground to aid her husband in the task. The reality of it hit me like a blizzard: The wintry landscape of Kashmir is beautiful only for the outsiders, for its inhabitants, it is a glacial nightmare.

With every fresh spell of snowfall, the family spent hours and hours shoveling snow from the rooftops. When it snowed incessantly for two-to-three days, everyone could be seen on their rooftops throwing snow into the water. The activity lasted for a couple of hours. Just when they thought the worst is over and came back to rest after the day’s hard labor, it started snowing again and they were back on the rooftops. 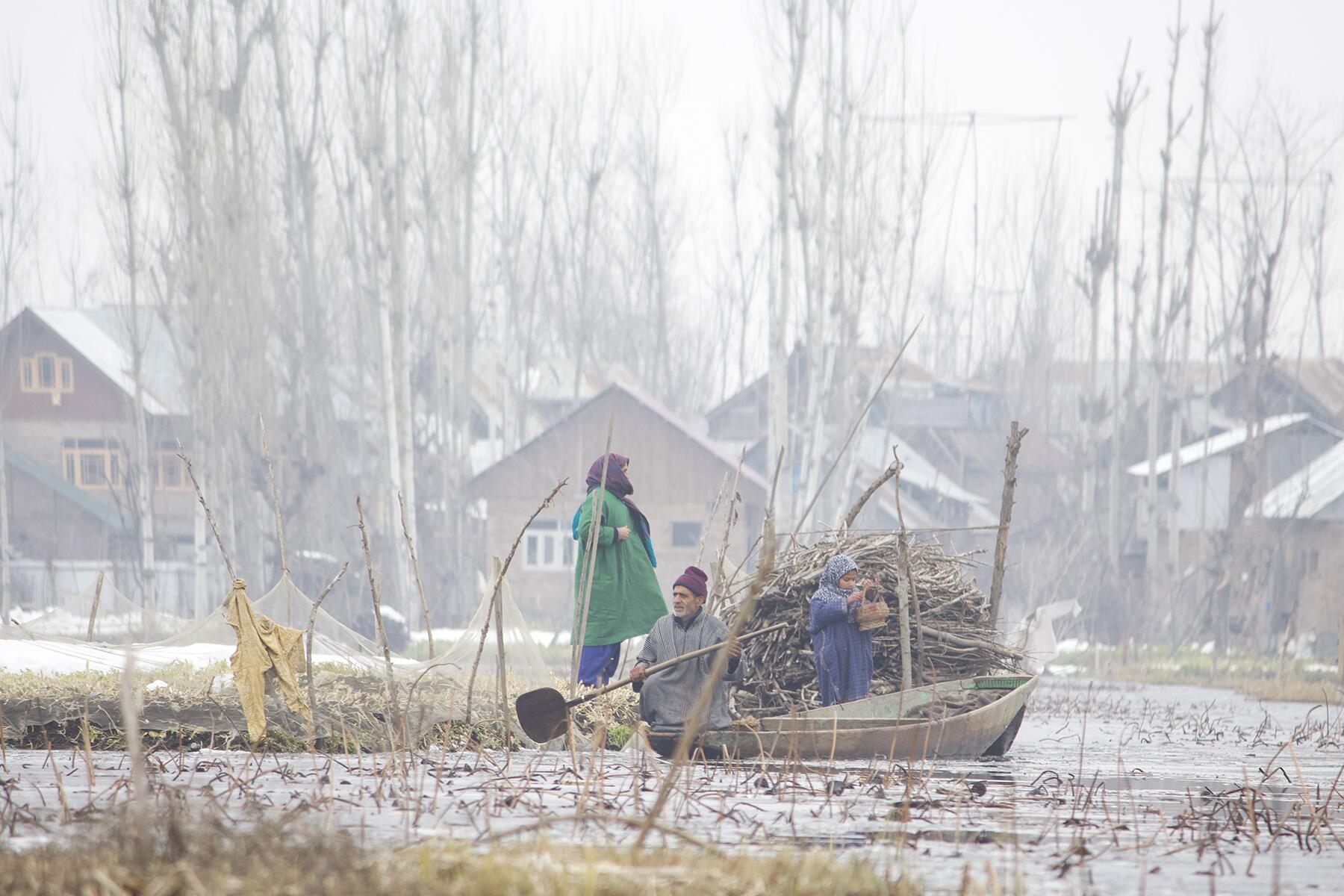 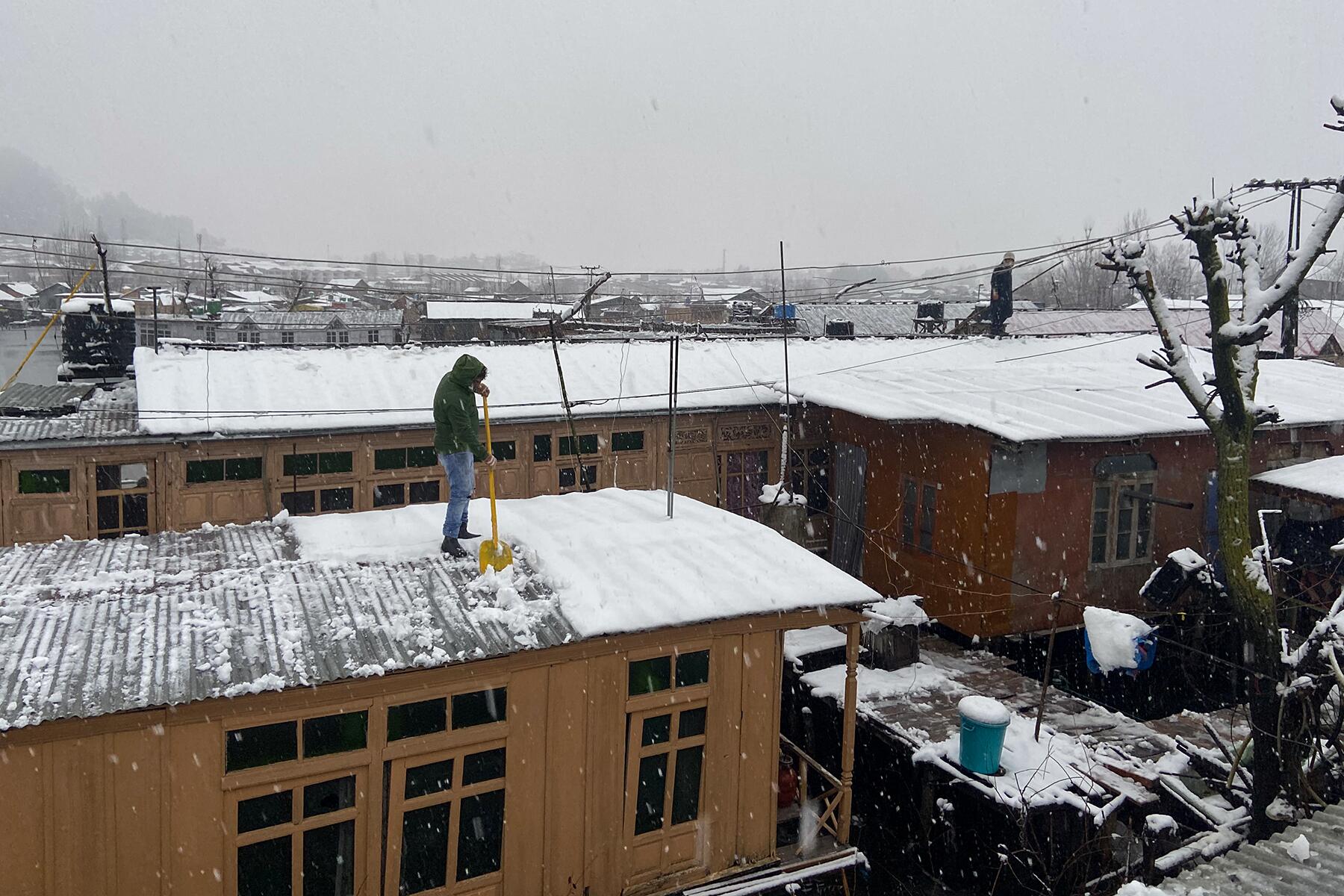 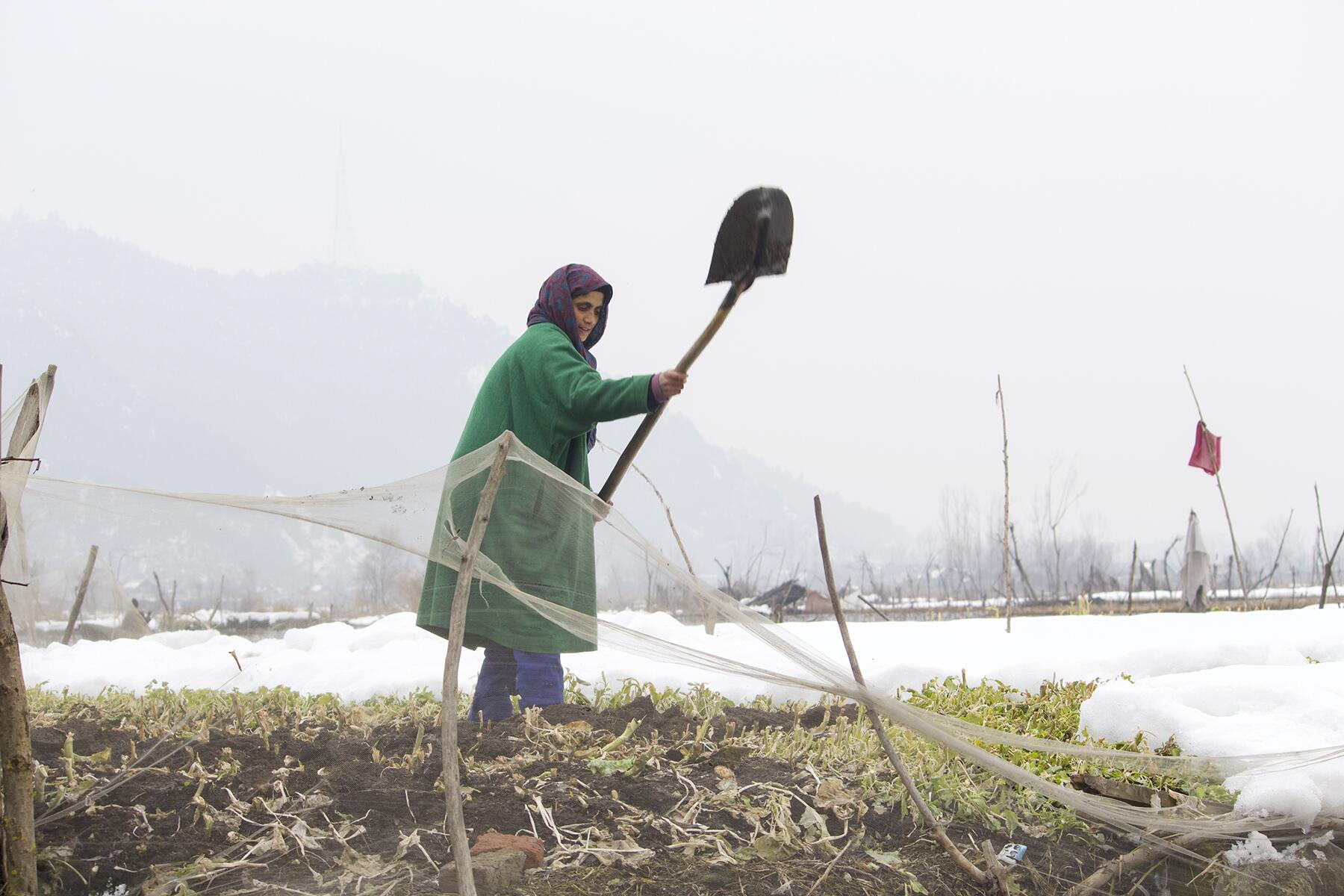 I watched them helplessly as they spent an entire day removing snow from every inch of their aging boat. It was not uncommon for Dal Lake to devour old houseboats during heavy snow spells. Accumulated snow on the rooftop adds extra weight that can sink the boat if the snow is not cleared. It was a backbreaking job with absolutely no reward, just a necessary evil to stay above the water. With the tourism business facing its worst time, the houseboat owners were cash-strapped to pay for the expensive repairs that are required to keep their boats from drowning. It was either that or grueling manual labor. My houseboat was among the unfortunate ones who had to choose the latter.

If I thought shoveling snow was taxing, I clearly wasn’t prepared for the next phase of the challenge: going across the lake when the water was frozen.

The lake that is usually covered in yellow-topped shikaras rocking gently on its waters was completely forsaken on cold mornings. The next day, when I had to head out for work, I waited until 12 p.m. for the frigid lake to be ready for any kind of movement. Every day someone would stand at the edge of their small boats, pounding away at the lake surface to make narrow gullies that the others used during the day to traverse. Sometimes the surface is so thick that it can damage the boat’s underside. People waited patiently outside to see who will pave the way for them. There is no such thing as urgency and everything happened at a pace acceptable to the iced Dal Lake. There was a very small window for you to go out and come back before the lake closed all the roads and one would have to do this exercise all over again the next morning.

I braved the cold and survived abject winter with the help of a searing kangri (an indigenous heating device intrinsic to Kashmir culture) and the warmth of its people. I would often stare at the innocuous-looking lake that has the ability to become sinister. I also watched all of it in silent horror, the hard work that went into surviving the bitter cold and how they weathered the storm that was brought by Kashmir’s volatility. It baffled me that even though chillai kalan is a yearly occurrence, the government departments are grossly under-equipped to ease the lives of thousands of families living on the water. Sometimes I felt that its locals suffered in silence amid all the talk about Kashmir’s beauty in winter and how it took the attention away from the real issues that get buried deep under layers and layers of pristine snow.

Very well wriiten the way the traveller who has stayed in the houseboat during the intense winter is commendable and gives hope to all those Kashmiris who have been hard hit since abrogation of Article 370 and 35A , one of the most melitarized zones of the world where Army has out numbered civilians, thanks to the Author describing how locals are facing challenges in their daily lives when every next hop , you have a Army Post Such a beautiful read! Written so intricately and melodically.

Thank you for sharing your chillai kalan experience!